Here is one really concrete sense in which deontology is what one gets by Taylor expanding consequentialism up to first order (this is copied from a rambling monograph):

Actually, there is a way to justify a kind of deontological principle as a heuristic for utility maximization, at least for a completely altruistic agent. For concreteness, consider the question of whether to recycle (or whether to be vegan for environmental reasons (the same approach also works for animal welfare, although in this case the negative effect is less diffuse and easier to grasp directly), or whether to engage in some high-CO2-emission-activity, or possibly whether to lie, etc.). It seems like the positive effect from recycling to each other agent is tiny, so maybe it can be safely ignored, so recycling has negative utility? I think this argument is roughly as bad as saying that the number of people affected is huge, so the positive effect must be infinite. A tiny number times a large number is sometimes a reasonably-sized number.

I think the main benefit of this is that it makes the tradeoff easier to imagine, at least in some cases. Here are three final remarks on this:

1) If our agent is not completely altruistic, then one can still understand diffuse effects in this way, except one needs to add a multiplier on one side of the equation. E.g. if one assigns a weight of 1/10 to everyone else, then one should compare the current world to a world in which everyone recycles, but with the diffuse benefits from recycling being only 1/10 of what they actually are.

2) We might deviate from linearity, but we can often understand this deviation. E.g. early vegans probably have a superlinear impact because of promoting veganism.

3) See this for discussion of an alternative similar principle.

Thanks, this is great!

My best attempt at trying to grok the partition here is that worlds are grouped according to something like the "intrinsic difficulty" of alignment, with the remaining uncertainty being over our actions to tackle alignment. But I don't see a good reason to think that the calculation methodology used in the post would give us such a partition. Perhaps there is another natural way to interpret the partition given, but I don't see it.

If you'd like to test this claim, you could recompute the numbers in the first column below with the arithmetic mean of the probabilities replacing the geometric mean of the odds, and find what the 18.7% product becomes. 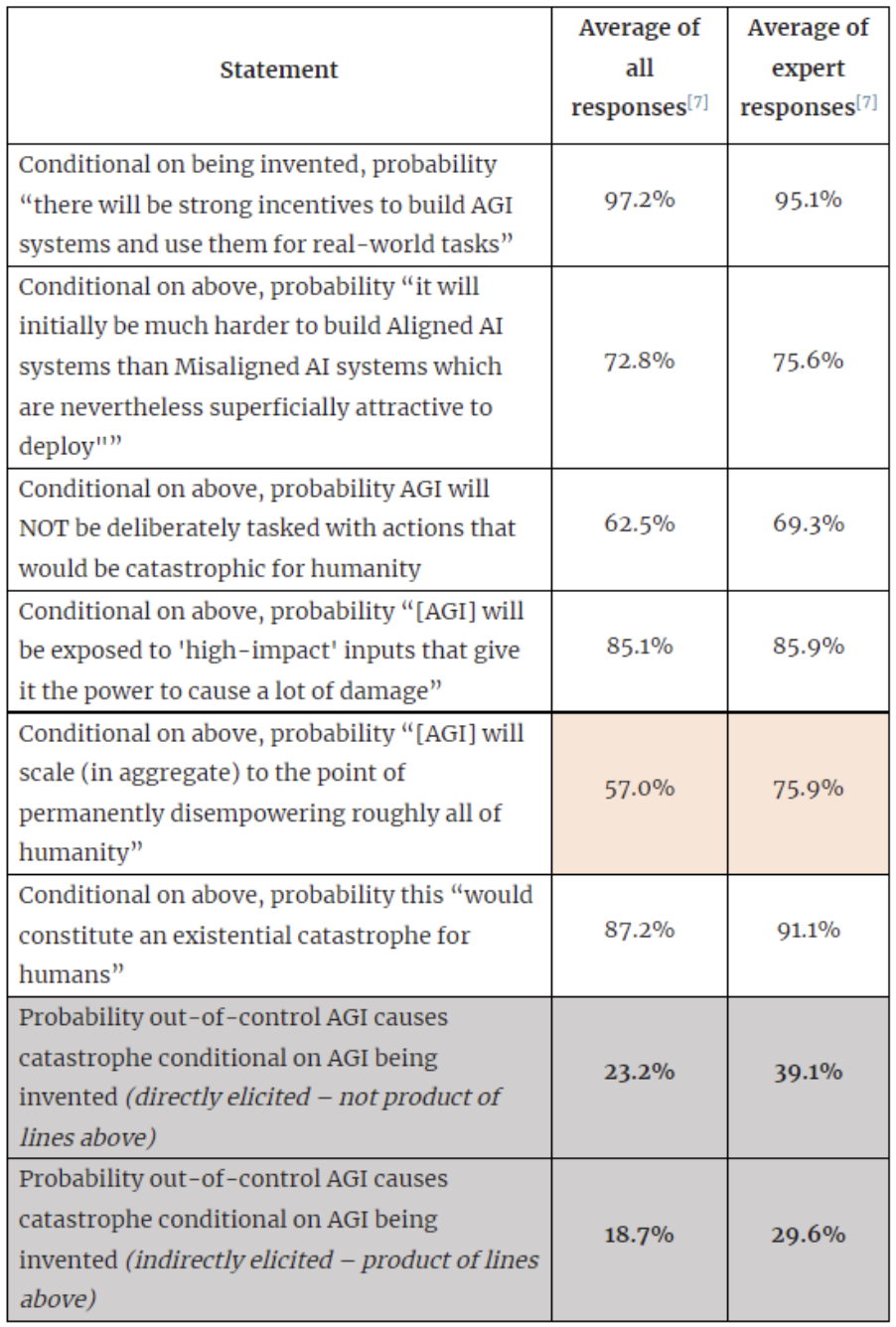 Thanks! That's indeed the quantity I was interested in, modulo me incorrectly thinking that you computed the geometric mean of probabilities and not odds.

Given that you used odds when computing the geometric mean, I retract my earlier claim that there is such a simple closed-form limit as the number of samples goes to infinity. Thanks for the clarification!

By the way, as the number of samples you take goes to infinity, I think the geometric mean of the sampled probabilities converges (in probability) to a limit which has a simple form in terms of the data. (After taking the log, this should just be a consequence of the law of large numbers.) Namely, it converges to the geometric mean of all the products of numbers from individual predictions! So instead of getting 1.6% from the sampling, I think you could have multiplied 42 numbers you calculated to find the number this 1.6% would converge to in the limit as the number of samples goes to infinity.  I.e., what I have in mind are the numbers that were averaged to get the 18.7% number below. [EDIT 2: That's not quite true, because the 18.7% was not the average of the products, but instead the product of the averages.]

Could you compute this number? Or feel free to let me know if I'm missing something. I'm also happy to elaborate further on the argument for convergence I have in mind.

If we actually take these to be the probabilities that we live in various kinds of worlds, then it's just a law of conditional probability that the overall probability is the arithmetic mean of the individual probabilities, not the geometric mean, I believe.

I could imagine ways to philosophically justify taking the geometric mean here anyway, e.g. by arguing that our synthetic samples are drawn from a large community of synthetic experts that is an accurate extrapolation of actual experts, and that it's a good idea to take the geometric mean of forecasts. [EDIT 1: I'm guessing this should be done with odds instead of probabilities though, and that this would bump the answer upward.] [EDIT 2: In fact, it was done with odds already.] But the former seems implausible given that the products of the numbers given by individual experts tend to be larger (in particular, larger mean) than the ones found for the synthetic community – this suggests that experts are giving correlated answers to the different questions. Perhaps we should think that some sort of idealized experts would answer these subquestions independently, but with the same distribution as the empirical one in this sample? It's not clear to me that this is the case. In any case, if there is good reason to take the geometric mean here, I think the analysis could greatly benefit from presenting a clear justification of this, as  the answer depends on this up to close to an order of magnitude.

I read your footnote 9 on this question regarding the geometric mean vs the arithmetic mean, and found it confusing. If the picture given in the first paragraph of my comment is indeed what you have in mind, then shouldn't the Brier-score-maximizing prediction still be the arithmetic mean (as that is the all-things-considered probability)? I don't see how the geometric mean would come into play.

(By the way, I'm aware that it doesn't quite canonically make sense to speak of the "tractability" of computing probabilities in a single belief network. But I don't think this meaningfully detracts from what I say above making sense and being true. (+ I guess the translation of the result in this post from math to common language would probably ~equivocate similarly.))

I'm sorry and I might well be missing something, but it seems to me that the main argument in the post is "here is a particular problem with having one's actions guided by models which are so messy as to make calculating probabilities of events impossible". But such models are not used by anyone to make predictions anyway, because they are computationally intractable (a forecaster can't generally use such models to compute probabilities, unless they are secretly in possession of something like something more powerful than a polynomial time SAT-solver)! So since no forecaster is operating with such a model, it seems to me that the post's main argument says nothing about whether what forecasters are actually doing makes sense or not.

The only part of the post that I understand as saying something about [whether [what [people actually assigning probabilities to potential catastrophic events] are doing] makes sense or not] is the response to counterargument 2.

It seems to me that ~all salient belief networks, at least in the sense of belief networks used by people in practice to come up with probabilities in this context, are computationally tractable. (I.e., coming up with probabilities given the model has to be computationally tractable, otherwise people would not be using the model to come up with probabilities.) So it seems to me that the (~only) crucial question here is whether we have reason to think that these particular tractable belief networks would make decent predictions – I understand that this is addressed a little bit in the response to counterargument 2. I don't find that argument convincing at all, but also this is not the main point I'd like to make with this comment. My main point is that it does not look like the main thrust of this post contributes anything to understanding of this ~only crucial question.

So it currently seems to me that the number of paragraphs in this post  which address whether longtermist reasoning can be action-guiding is approximately upper-bounded by 2. Again, I feel bad about being harsh here. To say something positive: the stuff about computational complexity is cool on its own! My meta-level guess is that I'm missing something crucial...