This is a novelty account created by Nuño Sempere for the purpose of providing perhaps-flawed frank criticism.

The problems it's intended to mitigate are that when providing criticism:

And yet, criticism seems worth it expectation, particularl if that it can change the actions of its recipients, or of its readers. For this reason, I thought it would be worth it to try to signal potentially flawed and upsetting criticism as such, and maybe develop a set of standard disclaimers around it.

I currently consider organizations, particularly large ones, to be fair game.

I am open to negative feedback requests, either here or through my main account.

New cause area: Violence against women and girls
NegativeNuno2mo15

I notice that this comment was pretty controversial (16 people voted, karma of 3). Here is how I would rewrite this comment to better fit in the EA forum:

I think that recognizing gender disparities is important for understanding what kind of violence occurs, and that that this is key to ending it because [and here goes a few specific pathways]. For example, if we look at the power dynamics between aggressors and victims, we can [do some example specific thing differently.] [1]

I think that for me the thing that was most missing is a pathway between noticing gender disparities and taking a different action, rather than caring about it in the abstract. I haven't really looked, but this might also be what's going on in some of your other unpopular comments.

Reply
If you fail, you will still be loved and can be happy; a love letter to all EAs
NegativeNuno2mo6

Here is a model that I want to share with you: 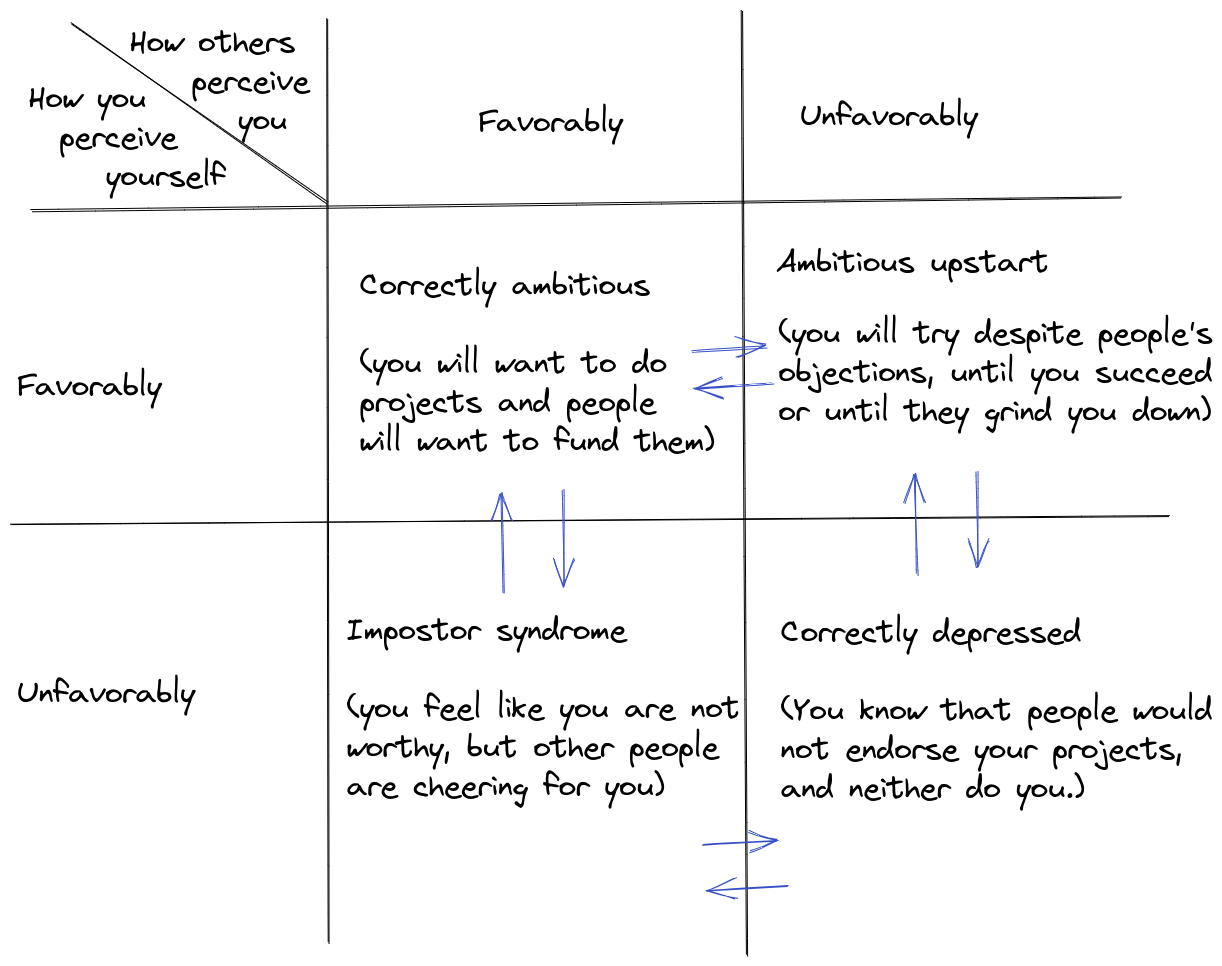 It's worded in terms of starting projects and receiving funding because that's been on mind, but you could translate it to other domains. There should also be a third dimension which is "well, but how good are you, really".

I claim that knowing where you are on that grid is important, because it will lead you to better actions (in the case of "correctly depressed", it might be "attain mastery of a skill" so that you move one level up, or "being ok with being humble" [1]).

I don't know what you are claiming with regards to that grid.

Reply
If you fail, you will still be loved and can be happy; a love letter to all EAs
NegativeNuno2mo0

The more I reread your post, the more I feel our differences might be more nuances, but I think your contrarian / playing to an audience of cynics tone (which did amuse me) makes them seem starker?

I think that I disagree with you with regards to how people value other people, and how people should expect other people to value them, and less about where one should derive one's own self-worth from [1]. As such, I do think that we have a disagreement.

I am not sure whether you're saying "treating people better / worse depending on their success is good"; particularly in the paragraphs about success and worth. Or that you think that's just an immutable fact of life (which I disagree with). What's your take?

I think it is good in the case of, for instance, your professional life. For instance, funders are likely to fund projects differentially for people who have previous successes under their belt. People might fire other people if they haven't been going well at their jobs.

In the case of personal life, it's more ambiguous. As we both agree on, it causes sorrow. However, I think it's hard to change, because there are traits that make someone a good friend, romantic partner, colleague, and I think that it's a bit futile to go against that. I don't think it's literally impossible, but I think that there are time tradeoffs, and developing existential chill is one of many things one could do with one's time.

I've also had bad experiences with situations which gave the outer impression of being high trust/high acceptance, but weren't in the end when that acceptance was pushed a bit.

I think that sometimes you can get away with a "judge once" regime, where once you are in someone's circle of care they care about you unconditionally, but I also think that people have limited spots.

How do you see "having given my honest best shot"as distinct from my point of the value in trying your hardest? I'm suspicious we'd find them most the same thing if we looked into it...

I'm not sure what your point of trying your hardest is, maybe:

I can donate effectively as much as I can, and work as hard as I can on what I think matters, but ultimately the odds are stacked against me, like they are for everyone

It's possible I'm missing what the point was.

I think that we have different things:

your other points/questions are more about how you value yourself ("self-worth"?), but I am mostly talking about how other people value you ("external worth"?), and neither agree nor disagree on the points about self-worth.

Muddying the above do think that how other people perceive one is usually a pretty important part of people's self-worth, and while I think this might be changeable with effort, I'm not sure to what extent that is a good use of one's time.

Maybe I should have written

I've found more value in deriving worth (part of my internal self-worth) from "having given my honest best shot" and taking actions that will make me more formidable, like mastery over skills (which increases both self-worth and external worth).

I don't think that mastery over skills is incompatible with notions of internal self-worth.

I would disagree over external self-worth. I think that people with more mastery over more skills are more valuable to those around them.

I don't mind if people think I'm better / worse at something and 'measure me' in that way; I don't mind if it presents fewer opportunities. But I take issue when anyone...:

The "I don't mind if it presents fewer opportunities" vs "[I do mind if they] treat them differently because of it" seem incompatible.

Here is a scenario: We have a few conversations. These conversations aren't enough for me to be very sure, but I come away with the impression that you are a boring conversationalist. In the future, I tend to seek other conversations. Is this something you'd object to?

I actually really do to this, I think that writing off people quickly is necessary in contexts like dates, job opportunities with many potential applicants, bloggers to read, etc. It's possible you have some more nuanced meaning here, though.

Reply
If you fail, you will still be loved and can be happy; a love letter to all EAs
NegativeNuno2mo17

Content warning: If you stare too much into the void, the void stares back at you.

So the title of my blog is Measure is unceasing partly as a reminder to myself that some of the ideas which are presented in this blogpost are dead wrong. In short, I think that people are judging each other all the time. In the past, pretending or wanting to believe that this isn't the case has provided me with temporary relief but ultimately led to a path of sorrow.

I particularly take issue with:

The problem with that form of reasoning is that the worth others ascribe to you is in fact pegged to your success. Other people will hold you in higher regard and esteem if you are in fact successful. You will get more grants, jobs or career opportunities, your ability to intervene in the world will be greater, and, perhaps most importantly for your wellbeing, you will attain more romantic success.

To be clear, I agree with your diagnosis that taking this fact to be true is emotionally hard. But I disagree that pretending that it isn't the case is a good solution. I've personally found value in learning to accept it instead and taking action to make reality come closer to what I desire it to be.

they are worthy as they are

So I think you can defend versions of this, but you end up with a notion of "worth" that is pretty essentialist and isn't really correlated with many of the stuff you care about (career success, influence over the world, romantic success, etc.). As such, I haven't found it valuable. I've found more value in deriving worth from "having given my honest best shot" and taking actions that will make me more formidable, like mastery over skills.

I don't find the yardstick of the universe useful, but I like humans v. nature framing.

Normally, I would just ask if they wanted to get a comment from this account. Or just downvote it and explain my reasons for doing so. Or just tear it apart. But today, I am low on energy, and I can't help but feel: What's the point? Sure, if I was more tactful, more charismatic, and glibber, I might both be able to explain the mistakes I see, and provide social cover both for myself and for the author I'm critizicing. But I'm not, not today. And besides, if the author was such that they produced a pretty sloppy piece, I don't think I'm going to change their mind.

Reply
My bargain with the EA machine
NegativeNuno5mo3

which of the categories are you putting me in?

I don't think this is an important question, it's not like "tall people" and "short people" are a distinct cluster. There is going to be a spectrum, and you would be somewhere in the middle. But still using labels is a convenient shorthand.

So the thing that worries me is that if someone is optimizing for something different, they might reward other people for doing the same thing. The case has been on my mind recently where someone is a respected member of the community, but what they are doing is not optimal, and it would be awkward to point that out. But still necessary, even if it looses one brownie points socially.

Overall, I don't really read minds, and I don't know what you would or wouldn't do.

Reply
My bargain with the EA machine
NegativeNuno5mo4

EA should accept/reward people in proportion to (or rather, in a monotone increasing fashion of) how much good they do.

I think this would work if one actually did it, but not if impact is distributed with long tails (e.g., power law) and people take offense to being accepted very little.

Reply
My bargain with the EA machine
NegativeNuno5mo18

One "classic internet essay" analyzing this phenomenon is Geeks, MOPs, and sociopaths in subculture evolution. A phrase commonly used in EA would be "keep EA weird". The point is that adding too many people like Eric would dillute EA, and make the social incentive gradients point to places we don't want them to point to.

I really enjoy socializing and working with other EAs, more so than with any other community I’ve found. The career outcomes that are all the way up (and pretty far to the right) are ones where I do cool work at a longtermist office space, hanging out with the awesome people there during lunch and after work

My understanding is that this is a common desire. I'm not sure what proportion of harcore EAs vs chill people would be optimal, and I could imagine it being 100% hardcore EAs.

Reply
Update on the Simon Institute: Year One
NegativeNuno5mo6

Circling back to this, this report hits almost none of the notes in lukeprog's Features that make a report especially helpful to me, which might be one reason why I got the impression that the authors were speaking a different dialect.