Saulius Simcikas is a research analyst at Rethink Priorities. Previously, he was a research intern at Animal Charity Evaluators, organised Effective Altruism events in the UK and Lithuania, and earned-to-give as a programmer.

What posts you are planning on writing?
saulius7h2

Yes, it made me a bit more willing to post here. But I put another week of work into that post before publishing. And I worked 2 more days on that post that I posted a couple of days ago which is also from my blog. I'm sure that some other posts from that blog are worth publishing after I put more work into them but I'm unsure if this is what I should be spending my time on. E.g., I don't want to post Cost-effectiveness of trap-neuter-return programs for cats on the EA forum without doing more to make sure it's correct (e.g. reading recent related research by other EAs). I'm unsure if I want to post Should you donate to a fund-raising meta-charity? without looking into the current situation of these charities (e.g. if there is room for more funding) and just generally thinking more about the topic. I guess it would be fine to still post it with a disclaimer but I would be afraid of giving people the wrong advice and also hurting my credibility. And I don't think posting it on the shortform would make much impact but I'd still care about saying the right things so I don’t want to bother with that.

Reply
A cause can be too neglected
saulius2d6

Also, I think the definition is different from how EAs casually use the model and I was making this point for people who are using it casually.

Reply
A cause can be too neglected
saulius2d6

Yes, the formula cancels out to good done / extra person or dollar, so the framework remains true by definition no matter what. Although if we are talking about a totally new cause, then % increase in resources is infinity and the model breaks.

But the way I see it, the framework is useful partly it’s because it’s easy to use intuitively. Maybe it’s just me, but when I’m now trying to think about newish causes with accelerating returns in terms of the model, I find it confusing. It’s easier just to think directly about what I can do and what impact it can end up having. Perhaps the model is not useful for new and newish causes.

Reply
A cause can be too neglected
saulius2d16

Yeah, probably someone mentioned it before. Before posting this, I wanted to read everything that was written about neglectedness to make sure that what I’m saying is novel. But there is a lot of text written about it, and I got tired of reading it. I think that’s why I didn’t post this text on the EA forum when I initially wrote it a year ago. But then I realized that it doesn’t really matter whether someone mentioned it before or not. I knew that it’s not a very common knowledge within EA because the few times I mentioned the argument, people said that it’s a good and novel point. So I posted it.

Reply
A cause can be too neglected
saulius2d5

I think there are some transferable set-up costs. For corporate campaigns to work, you need an involvement of public-facing corporations that have at least some customers who care about animal welfare, and an ask that wouldn't bankrupt them if implemented. I don't think that any corporations involved in baitfish or fish stocking are at all like that. Maybe you could do a corporate campaign against pet shops to stop selling pet snakes. But snakes are also sold at specialized reptile shops and I don't think that such a campaign against them would make sense.

I estimate that at any given time in 2017 there were between 1.4 and 4.8 trillion adult managed honey bees

I want to draw attention to just how huge these numbers are. In animal advocacy we often talk about how many farmed chickens there are. E.g., that there are 3.6 times more farmed chickens at any time than farmed cows, pigs, sheep, goats, ducks, turkeys and rabbits combined. But there are between 59 and 202 adult managed honey bees for every farmed chicken.* To help remember just how big is this difference, I created this graphic: 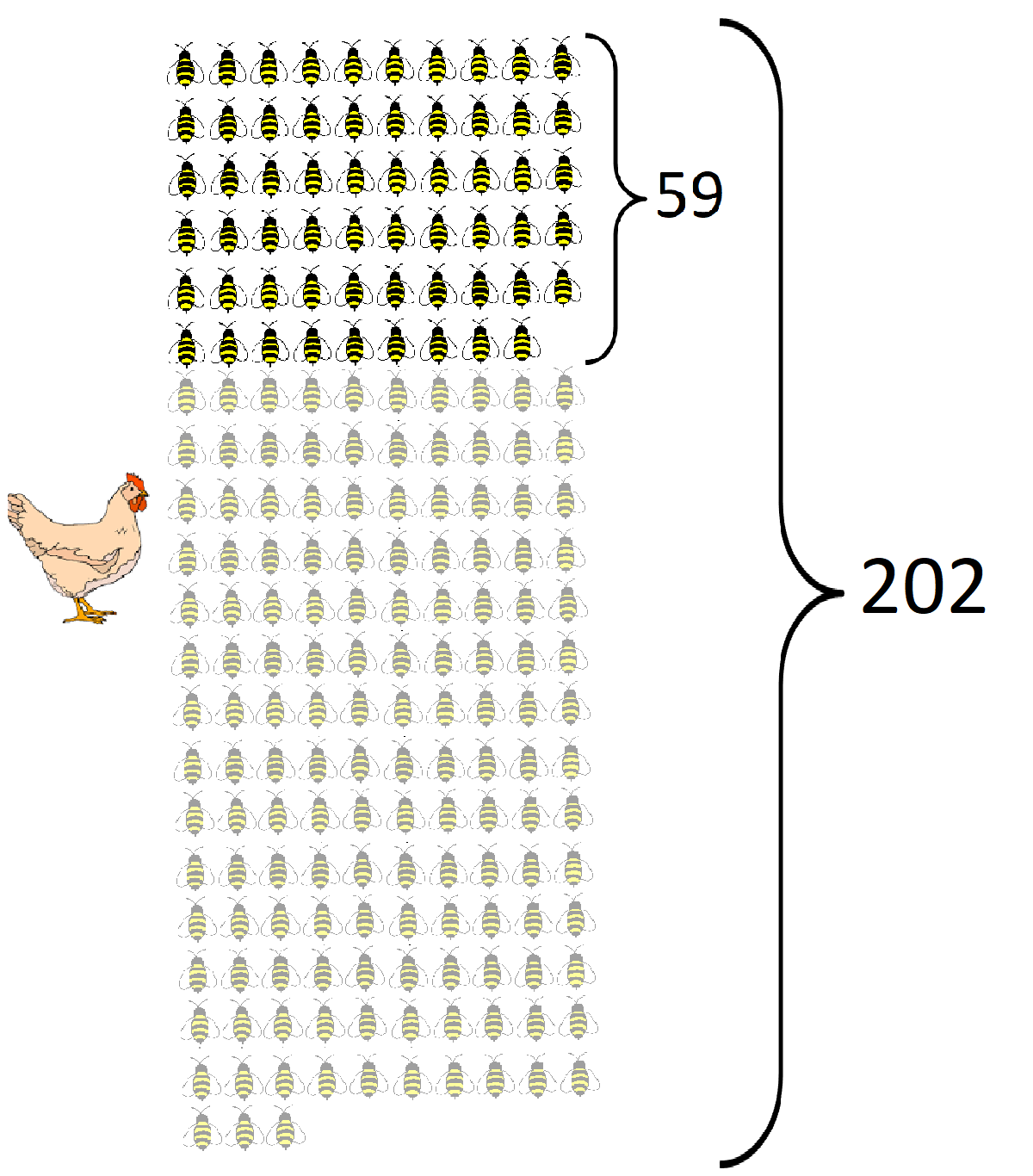 *The number of chickens here includes both, egg-laying hens and meat chickens. All numbers and estimations can be seen here.

Reply
A cause can be too neglected
saulius3d13

I didn’t mention it in the post because I wanted to keep it short but there was a related discussion on a recent 80,000 hours podcast with WillMacAskill with some good points:

Will MacAskill: So take great power war or something. I’m like great power wars are really important? We should be concerned about it. People normally say, “Oh, but what would we do?”. And I’m kinda like, I don’t know. I mean policy around hypersonic missiles is like one thing, but really I don’t know. We should be looking into it. And then people are like, “Well, I just don’t really know”. And so don’t feel excited about it. But I think that’s evidence of why diminishing marginal returns is not exactly correct. It’s actually an S curve. I think if there’d never been any like investment and discussion about AI and now suddenly we’re like, “Oh my God, AI’s this big thing”. They wouldn’t know what to do on Earth about this. So there’s an initial period of where you’re getting increasing returns where you’re just actually figuring out like where you can contribute. And that’s interesting if you get that increasing returns dynamic because it means that you don’t want really spread, even if it’s the case that–

Will MacAskill: Exactly. Yeah. And so I mean a couple of reasons which kind of favor AI work over these other things that maybe I think are just as important in the grand scheme of things is we’ve already done all the sunk cost of building kind of infrastructure to have an impact there. And then secondly, when you combine with the fact that just entirely objectively it’s boom time in AI. So if there’s any time that we’re going to focus on it, it’s when there’s vast increases in inputs. And so perhaps it is the case that maybe my conclusion is perhaps I’m just as worried about war or genetic enhancement or something, but while we’ve made the bet, we should follow through with it. But overall I still actually would be pretty pro people doing some significant research into other potential top causes and then figuring out what should the next thing that we focus quite heavily on be

Robert Wiblin: I guess especially people who haven’t already committed to working on some other area if they’re still very flexible. For example, maybe they should go and think about great power conflict if you’re still an undergraduate student.

Will MacAskill: Yeah, for sure and then especially different causes. One issue that we’ve found is that we’re talking so much about biorisk and AI risk and they’re just quite weird small causes that can’t necessarily absorb large numbers of people perhaps who don’t have… Like I couldn’t contribute to biorisk work, nor do I have a machine learning background and so on, whereas some other causes like climate change and great power war potentially can absorb just much larger quantities of people and that could be a strong reason for looking into them more too.

If I were to read one of EA-related books (e.g. Doing Good Better, The Most Good You Can Do, The Life You Can Save, The Precipice, Superintelligence, etc.), I would consider writing/improving a summary of the book in wikipedia while reading it, in a way that conveys main points well. It could help you to digest the book better and help others to understand the ideas a bit. You could do it in english as well as maybe in some other language. To see whether it’s worth putting in the effort, you can check out Wikipedia pageview statistics of the books I mentioned and others here (it doesn’t include some views that come from redirects though). It seems that the page Superintelligence is the most viewed one out of these with an average of 4,597 monthly visitors.

There isn’t yet reason to believe that overall animal populations are decreasing.

WWF claims that "on average, we’ve seen an astonishing 60% decline in the size of populations of mammals, birds, fish, reptiles, and amphibians in just over 40 years." I don't know how they arrived at this estimate though.

an interesting/useful term or concept is discussed but never clearly defined, or is used/defined in various somewhat different ways

I think that EA Concepts did a good job mitigating this problem regarding concepts, although I'm unsure how many people read it. In general, it seems that it would be better if these sort of collections would be in one place (e.g., like they are in EA Concepts), in addition to being scattered throughout the EA Forum. Maybe an EA wiki (which is already in the works) could solve such a problem, provided enough people use it. Or maybe EA concepts could be expanded. Or maybe we should also post collections of summaries/collections on the Forum.