Sorted by New
79[link post] How effective altruism went from a niche movement to a billion-dollar force4mo
0
3TobiasH's Shortform1y
5
10Does anyone know of an English translation for the final report on the Finnish UBI experiment?Q3y
Q
1

What videos should Rational Animations make?
Answer by Tobias HäberliNov 27, 202221

I recently heard the Radio Bostrom audio version of the Unilateralist's Curse after only having read it before. Something about the narration made me think that it lends itself very well to an explainer video.

One additional thing I’d be curious about:

You played the role of a messenger between SBF and Elon Musk in a bid for SBF to invest up to 15 billion of (presumably mostly his) wealth in an acquisition of Twitter. The stated reason for that bid was to make Twitter better for the world. This has worried me a lot over the last weeks. It could have easily been the most consequential thing EAs have ever done and there has - to my knowledge- never been a thorough EA debate that signalled that this would be a good idea.

What was the reasoning behind the decision to support SBF by connecting him to Musk? How many people from FTXFF or EA at large were consulted to figure out if that was a good idea? Do you think that it still made sense at the point you helped with the potential acquisition to regard most of the wealth of SBF as EA resources? If not, why did you not inform the EA community?

I think that it's supposed to be Peter Thiel (right) and Larry Page (top) in the cover photo. They are mentioned in the article, are very rich and look to me more like the drawings.

Release shocking results of an undercover investigation ~2 weeks before the vote. Maybe this could have led to a 2-10% increase?

My understanding is, that they did try to do this with an undercover investigation report on poultry farming. But it was only in the news for a very short time and I'm guessing didn't have a large effect.

White Supremacy:
In a public facebook post you link to this public google doc where you call a quote from Nick Beckstead “unambiguously white-supremacist”.

You claim that the writing of Bostrom, Beckstead, Ord, Greaves, etc. is “very much about the preservation of white Western civilization”: 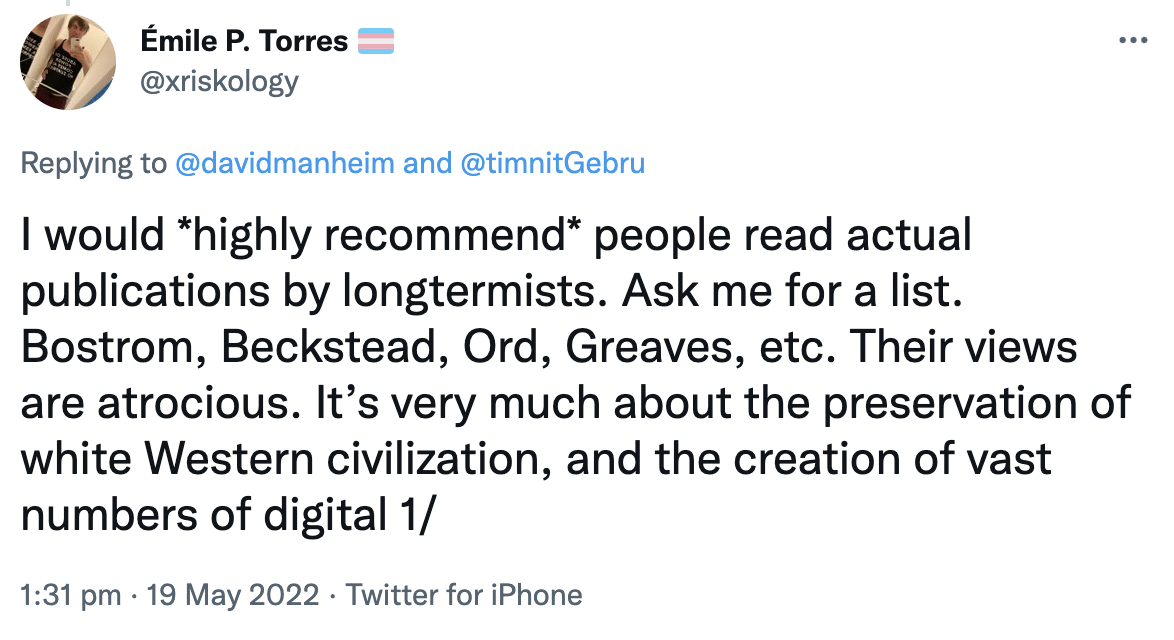 You also tweeted about a criticism of Hilary Greaves  in which you “see white supremacy all over it”:

Genocide:
On another facebook post you agree with Olle Häggström [note: Häggström actually strongly disagrees with this characterization of their position] that Bostrom’s idea of transhumanism and utilitarianism in Letters from Utopia “is a recipe for moral disaster—for genocide, white supremacy, and so on.”

Eugenics:
In your Salon article you call some of Bostrom’s ideas “straight out of the handbook of eugenics”.
https://www.salon.com/2022/08/20/understanding-longtermism-why-this-suddenly-influential-philosophy-is-so/

You also say that “Longtermism is deeply rooted in the ideology of eugenics”.

You called Sam Harris “quite racist”:

In this tweet you strongly imply that some of Bostrom’s views are indistinguishable from scientific racism:

There’s also this tweet that describes the EA community as welcoming to misogynists, neoreactionaries, and racists: 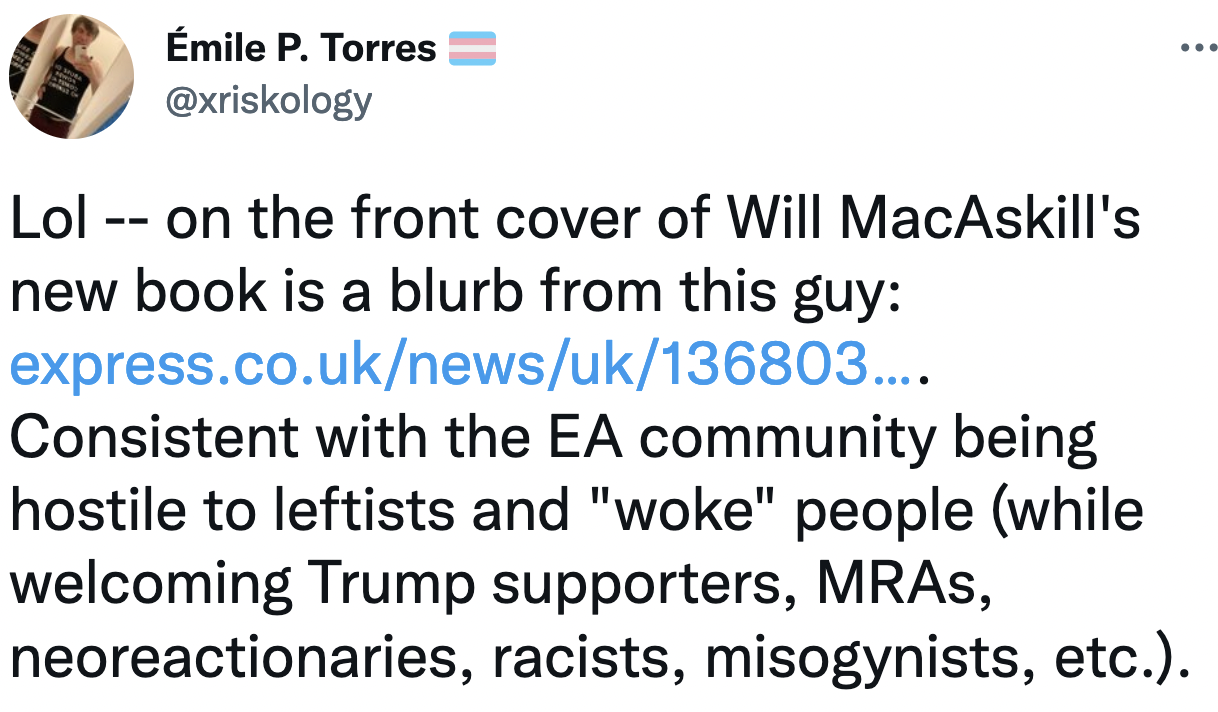 Toby Ord touches on that in The Precipice.
For example here (at 11:40)

Reply
Why does no one care about AI?
Tobias Häberli4mo1

But the same study also found that only 41% of respondents from the general population placed AI becoming more intelligent than humans into the 'first 3 risks of concern' out of a choice of 5 risks.
Only for 12% of respondents was it the biggest concern. 'Opinion leaders' were again more optimistic – only 5% of them thought AI intelligence surpassing human intelligence was the biggest concern.

Reply
Why does no one care about AI?
Tobias Häberli4mo2

I recently found a Swiss AI survey that indicates that many people do care about AI.
[This is only very weak evidence against your thesis, but might still interest you 🙂.]

The question:
"Do you fear the emergence of an "artificial super-intelligence", and that robots will take power over humans?"

The 'opinion leaders' however are much less concerned. Only 2% have a lot of fear and 23% have a bit of fear.