Invertebrate welfare has been gaining recent traction in the scientific literature and among the effective altruism community. However, whether invertebrates have the capacity to experience pain and pleasure in a morally significant way is still very uncertain. Given this current epistemic state, Rethink Priorities has been compiling and analyzing relevant scientific evidence regarding invertebrate consciousness and exploring criteria that evaluate whether individuals of a given invertebrate species or taxon have valenced experience. These data have been gathered and displayed in this database. In this post, the first one of two pieces on our main findings, we present our results by feature. 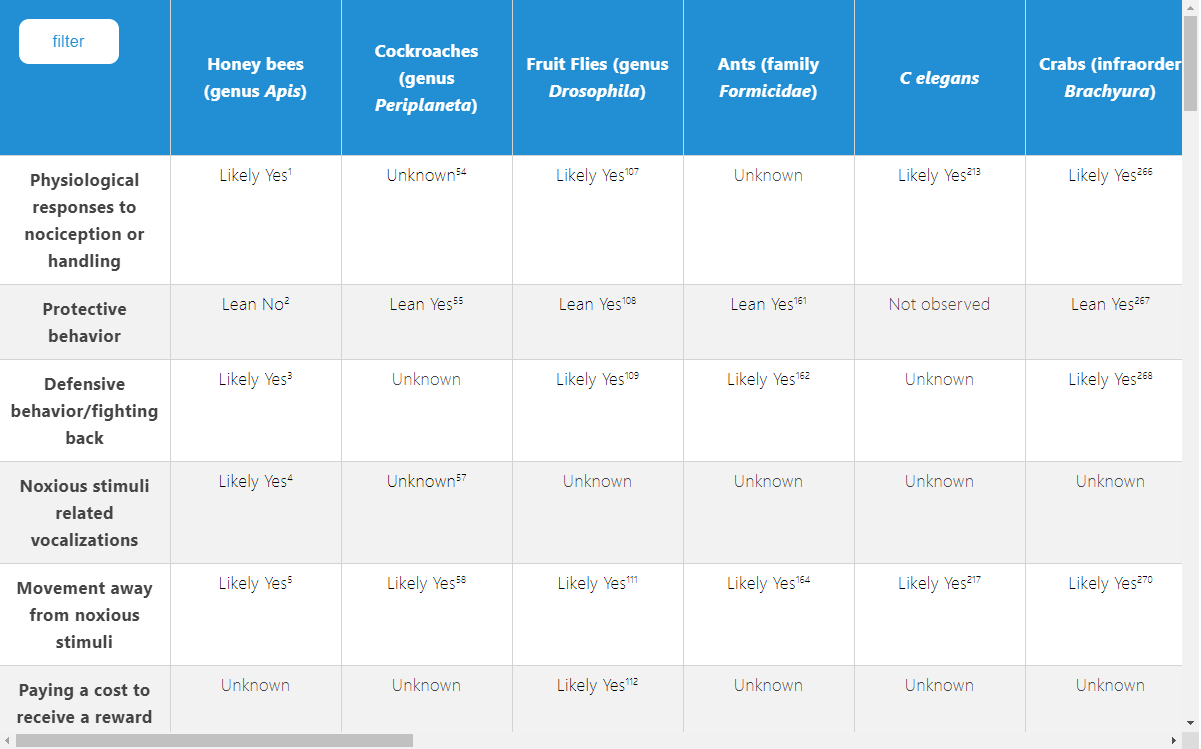 Invertebrates are commonly assumed to be incapable of experiencing positive or negative states (Mather, 2001). Similarly, some researchers dispute the available evidence of consciousness in invertebrates, arguing, for instance, that certain behaviors are mere automatic responses to noxious stimulation, rather than conscious reactions (Sherwin, 2001). Nevertheless, invertebrate welfare has been gaining recent traction in the scientific literature and among the effective altruism community.

Given this current epistemic state and the need to determine whether invertebrate welfare is a cause area that merits further efforts (see our previous post), Rethink Priorities has been compiling and analyzing relevant scientific evidence regarding invertebrate consciousness and exploring criteria that evaluate whether individuals of a given invertebrate species or taxon are conscious. We selected 53 features potentially indicative of the capacity for valenced experience and examined the degree to which these features are found throughout 12 invertebrate taxa, plus six other non-invertebrate taxa included for comparison purposes, as explained here. Additionally, we explored if the selected features associated to consciousness may occur unconsciously in humans, since if the above occurs, that might be a good defeater for that feature when assessing consciousness in other non-human individuals. The mentioned data have been gathered and displayed in this database.

The evidence about invertebrate consciousness and the considered criteria is presented and summarized in two different parts: first, in this post, we explore the types of consciousness-indicating features that are found in invertebrates, according to the existing literature about the studied taxa. Second, in an upcoming post, we describe our main findings for each species or taxon. Given the objective of our project, this report does not discuss our findings on vertebrates. For a better understanding of the features that may occur unconsciously in humans, see this narrative report.

Finally, it should be noted that all the percentages presented here only refer to frequencies of a given category: for example, the frequency of "likely yes" responses for a species, or the frequency in which a specific feature is found across all the studied taxa. They shall not be interpreted as measures of the quantity or degree to which any feature is present in a given species or taxon.

Which consciousness-indicating features did we find in invertebrates? Results by feature

We selected eight types of features potentially indicative of the capacity for valenced experience and examined the degree to which these features are found throughout 12 invertebrate taxa. In general, we can affirm that there are more unknowns than certainties about these indicators of consciousness in these taxa. Of the 53 features reviewed across 12 invertebrate taxa, we found no evidence regarding 43.6% of cases. On the other hand, there is relatively strong evidence, either positive or negative, regarding 35.5% of the features. This is summarized in the following graph:

Graph 1. Percentage of responses for all the consciousness-indicating features.

Of all the features reviewed, those most prevalent among the invertebrate species or taxa studied are certain anatomical and evolutionary features and navigational skills. On average, those features were observed in more than half of the cases, but at the same time, these are the indicators where more negative responses were found. This highlights the importance of further research for reaching clearer conclusions about the potential to have valenced experiences, in light of the different adaptive needs of different invertebrate species. This is presented in the graphs below (graphs 2 and 3):

Graph 2. Percentage of responses for anatomical and evolutionary features.

Regarding the anatomical features (graph 2), ‘motility’ and ‘nociception’ (loosely understood), are found across all the studied taxa. Strikingly, the greatest uncertainties (absence of research) refer to our strict definition of nociception, that is, the identification of actual nociceptors in an animal[3]. Hence, the high presence of nociceptive reactions detected suggests an anatomical substrate that has yet to be investigated in 50% of the taxa that we considered in this study. Opioid-like receptors are present in more than half the taxa (58.3%) and there is important evidence that—to varying degrees—various invertebrate taxa would centralize exteroceptive and interoceptive sensory information processing. Still, given the importance conferred on these features by various researchers (Bateson, 1991; Broom, 2013; EFSA, 2005; Elwood, 2011; Fiorito, 1986; Sneddon et al., 2014; Sneddon, 2017), they merit further investigation.

Regarding navigational skills (graph 3), the ability to navigate through known or unknown areas was found in most of the taxa. In contrast, there are fewer studies on spatial memory in invertebrates, and even less research on detour behavior. If it is true that navigation abilities can provide insight about consciousness, then spatial memory and detour behavior, as the most sophisticated navigational skills studied across diverse taxa, are important features to consider.

For their part, noxious stimuli reactions were observed in more than 45% of the studied species or taxa, similar to learning features. Here, negative responses were more limited than those found for previous features, ranging from 3.2% to 3.8% (graphs 4 and 5).

We observed that all the invertebrate taxa move away from noxious stimuli, a response that is well preserved among motile organisms. However, it must be considered that this reaction could be a mere reflex and, at the same time, it is known that this response can also occur unconsciously in humans. Hence, it probably reveals little about an organism’s capacity for valenced experience. In contrast, there is weak evidence and high levels of uncertainty about vocalizations in invertebrates related to noxious stimuli—no evidence was found in more than 83% of cases. ‘Physiological responses to nociception or handling’ is observed in half of the taxa, but given the importance conferred on it by various researchers (Bateson, 1991; Broom, 2013; EFSA, 2005; Elwood, 2011; Fiorito, 1986; Sneddon et al., 2014; Sneddon, 2017), this feature requires further investigation.

Regarding our learning indicators, simple forms of learning—i.e. sensitization, habituation and classical conditioning—have been widely studied and found across the considered invertebrates. Given that these forms of learning can occur in other animals without the mediation of a brain and often operate unconsciously in humans they may not provide much evidence, by themselves, for the capacity for valenced experience. Operant conditioning, for its part, is a more complex form of learning and therefore is slightly better evidence for conscious experience. In this regard, three out of four species or taxa studied (75%) display this feature. Additionally, our major information gaps are related to ‘pain relief learning’, ‘long-term behavior alteration to avoid noxious stimuli (30+ days)’ and, to a lesser extent, ‘taste aversion behavior’.

As mentioned before, our knowledge about cognitive sophistication, mood state behaviors, drug responses and motivational tradeoffs in invertebrates is strikingly limited. These features represent the highest percentage of unknowns, where no evidence was found regarding more than half of the studied indicators. These results are detailed in the three following graphs (6, 7, 8 and 9):

In the case of cognitive sophistication[4] (graph 6), uncertainty monitoring, self-recognition and deception have not been investigated in at least 83% of the taxa. For their part, and according to indirect studies, tool use and flexible tool use are not observed in more than 58% of cases. This suggests that features related to cognitive sophistication are usually considered unlikely to be found in invertebrates.

With regards to mood state behaviors (graph 7), on average, no evidence was found for 56% of the studied invertebrates. Anhedonia, learned helplessness, displacement and stereotypic behavior are the features with the highest percentages of “unknown” responses, in at least 75% of cases. Fear/anxiety behavior and adverse effects of social isolation have received more attention, but there is still no evidence for 41.7% and 25% of taxa, respectively. Indirect evidence suggests that invertebrates, in general, do not exhibit play behavior.

With some exceptions, the effects of various drugs in invertebrates are not usually studied. On average, there is no evidence regarding 60% of drug responses (graph 8). The greatest lack of knowledge refers to investigations about the self-administration of drugs. On the other hand, there are more studies on the effects of analgesics. Yet, given given the importance conferred on the effects of analgesics by various researchers (Bateson, 1991; Broom, 2013; EFSA, 2005; Elwood, 2011; Fiorito, 1986; Sneddon et al., 2014; Sneddon, 2017), this feature merits further investigation.

Finally, about motivational tradeoffs (graph 9), the degree of uncertainty increases to 76.7% of cases, which makes it the most neglected research area about consciousness in invertebrates. The least studied features are ‘paying a cost to receive a reward’ and ‘paying a cost to avoid a noxious stimulus’.

In general, researchers seem to consider it unlikely for invertebrates to possess cognitive sophistication, mood state behaviors and motivational tradeoffs. Additionally, there are limited studies in invertebrates exploring if the effects of certain drugs are similar to the behavioral effects that these substances cause in humans. However, the complex behaviors of some eusocial insects, for example, may undermine these conceptions. Further research in these topics may have an important impact on our understanding of consciousness, at least in some invertebrate species.

In any case, the relevance of these findings must be understood in the context of the species or taxa that have been considered. This is presented in an upcoming post.

This essay is a project of Rethink Priorities.

Thanks for this amazing work