The relevance of trophic interactions to wild animal welfare

You can read this post and others on our blog.

Almost all animals live off of energy ultimately derived from the sun by the photosynthetic activity of plants. This is true even of animals who do not eat plants as part of their own diet, but rather eat other animals who in turn ate plants. The transfer of energy from the bodies of individuals of one species to those of a different species is known as trophic interaction, or more colloquially, a food chain. 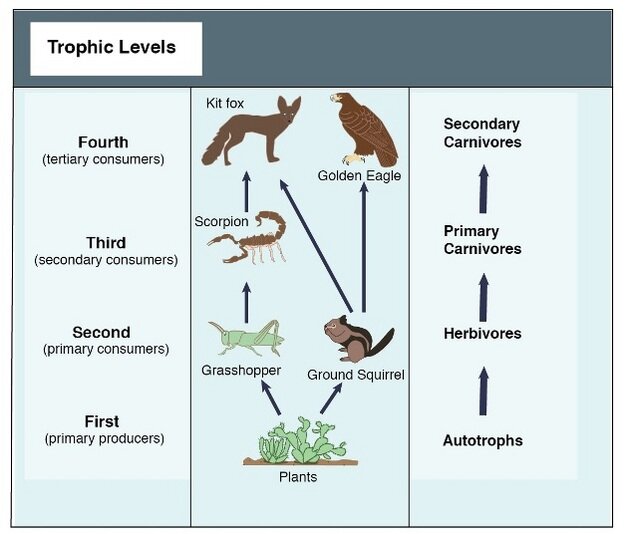 According to many ethical views, an ecosystem supporting more happy animals is preferable to one which supports fewer equally happy animals. In many cases, communities with multi-level trophic chains support more animals than communities with simpler chains. But how additional trophic complexity influences the quality of animal lives is unclear — from an individual’s perspective, passing energy up the food chain requires their death and the loss of the opportunity to invest that energy in their own life or that of their offspring. To begin to address this apparent tradeoff, we will need to understand how trophic interactions influence the quality and quantity of animal lives in an ecosystem. In this article, I will specifically explore the welfare implications of food chain length, biomass distribution, and predation. 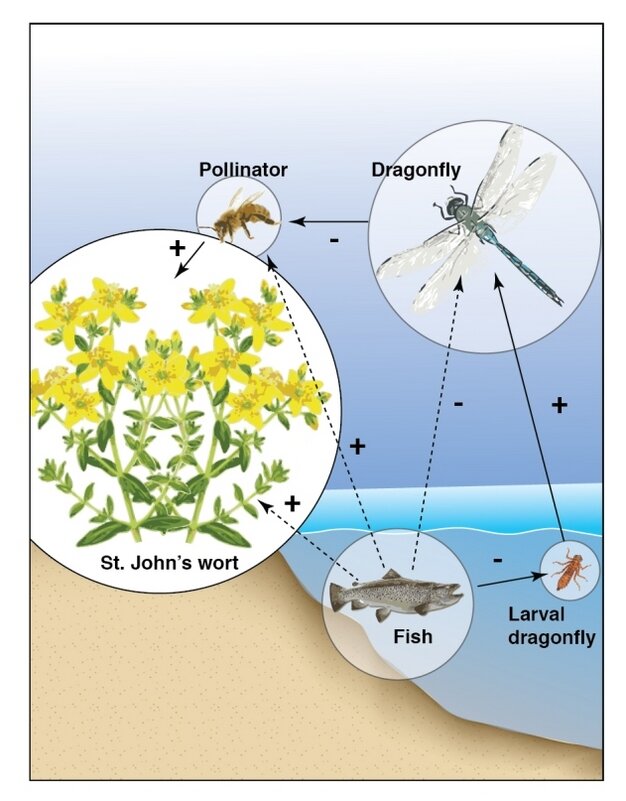 There is a directionality to food chains, which classically begin with plants at their base and end with an apex predator. These species are said to occupy different trophic levels. The number of trophic levels an ecosystem supports, and how diverse each one can be, is influenced by a plethora of factors. One such factor is the raw amount of energy available from lower trophic levels, known as productivity.

The energy derived from plants is expended in the biological activities of each organism it passes through, resulting in only a fraction of that energy being left over for use by higher trophic levels (Pimm 1988). After being sieved through a certain number of trophic levels, there may not be enough energy available to sustain an additional trophic level. At this point, the food chain is said to be energetically limited.

Many food chains are not limited by energy availability. Instead, some food chains terminate due to historical contingency. For example, in young ecosystems, there may be no immigrants of an appropriate species to continue the chain (Doi and Hillebrand 2019). Food chains may also end due to the unstable population dynamics that result when an additional trophic level is added to the system (Zhao et al. 2019). To understand why, consider a simple community composed of a predator, an herbivore, and a plant species. Herbivores consume plants, and are subsequently killed and eaten by predators. These trophic interactions influence the population dynamics of all three groups. For example, the addition of a predator to a simple herbivore-plant food chain might suppress the population of herbivores, in turn relieving some of the herbivory pressure on the plant population.

The indirect effect of the predator-prey interaction on the size of the plant population is known as a trophic cascade. Most of the time trophic interactions are stable, but they can be destabilizing, especially when there are many factors influencing population sizes. If the predator in this example was able to eradicate the herbivore, perhaps during an already low phase in their population cycle, the entire food chain might collapse, condemning the remaining predators to starvation.

There is a rich literature on the conditions required for stable predator-prey relationships, and destabilization is thought to be more likely when food chains are longer, leading to more cascading effects and more opportunities for the chain to be severed by the extinction of one species (Post 2002). However, theory and experiment also suggest that the destabilizing effect of food chain length can be compensated for by biodiversity at each level of the food chain, reducing the probability that an unstable interaction will sever the chain (Zhao et al. 2019). In this sense, food chains can be thought of as towers that become more susceptible to toppling with length (“vertical” diversity), and more resilient with breadth (“horizontal” diversity). Food chain length matters for wild animal welfare because destabilization through extinction of a particular species can lead to harmful outcomes such as starvation, unsustainable population growth, and intensified competition among remaining species (Ebenman et al. 2004), while trophic biodiversity can influence how many animals an ecosystem is able to support (Duffy et al. 2005).

If all organisms in an ecosystem experienced equally positive welfare, then maximizing the productivity of the ecosystem would lead to higher total welfare. In reality, things are not so straightforward. Some individuals may suffer so substantially that their cumulative welfare over their lives is negative. Other organisms may contribute nothing to the welfare equation, as most of the biomass on our planet is made up of organisms that are unlikely to be sentient (such as microorganisms, plants, and fungi) or animals whose sentience and welfare capacity is difficult to ascertain (such as arthropods and nematodes) (Bar-on et al. 2018). Of course, self-sustaining populations of these organisms are instrumental to the ecosystem services that support happy, sentient animals.

Just as the quality of animals’ lives likely varies between species, so does the number of lives that can be sustained. Both factors influence the total amount of welfare in an ecosystem. Even among animals who are almost certainly sentient, including most vertebrates, there is extreme variation in average body mass and metabolic rate (Healy et al. 2019). These differences in energy use imply that more lives might be lived in an ecosystem composed of smaller or more metabolically efficient animals than an equally productive ecosystem composed of larger or less efficient animals, where the same amount of energy is divided among fewer individuals.

When animals die of things like disease, starvation, or accidents and are not immediately eaten by predators or animal scavengers, much of their biomass is used by microorganisms as the body is decomposed. Such decomposition adds additional layers of trophic interaction before a fraction of the originally available biomass reaches a sentient organism. The energy lost to microorganisms could be a net loss for wild animal welfare if the resource could have gone to improving the life of a sentient animal or extending an already positive life.

The concept of ecotrophic efficiency refers to the proportion of biomass of a particular species that is used and lost in the biological functioning of individuals of that species, or passed on to a higher trophic level via death by predation, relative to the energy that is lost via generalist decomposers. Causes of death other than predation generally lower a species’ ecotrophic efficiency. For example, Krebs et al. (2003) estimated the ecotrophic efficiencies of several species in the Canadian Arctic. They found that ecotrophic efficiency was high (~70%) among small herbivores such as lemmings and hares, who were predominantly killed by predators, but low (~9%) among large herbivores such as caribou and muskox. The concentration of biomass into high-welfare individuals is the ideal function of food chains in wild animal welfare.

A conflict of interest between predators and their prey

No animal wants to be killed by a predator, but no predator wants to die of starvation. The conflict of interest between predators and prey seems like a deadlock when framed this way, but the interested parties are not equal in size — a single predator generally needs to kill multiple prey animals to survive.

Trophic assimilation efficiency, or the conversion rate of prey biomass into predator biomass, is expected to average around 10-50%, with higher efficiencies when predators and prey are more similar in size and physiology (Sanders et al. 2016). To illustrate this point, suppose a predator consumes an animal whose body contains 100% of the energy the predator requires for the year. If the trophic assimilation efficiency is 25%, for instance, then the predator would need to consume 4 such animals per year to survive. Jensen and Miller (2001), for example, estimate that a wolf consumes 12-36 deer per year.

For a given assimilation efficiency, the greater the metabolic disparity between predator and prey, the more prey animals the predator will have to consume, as the energetic content of the prey animal would be a smaller proportion of the predator’s metabolic needs. Such disparities are common in marine and many terrestrial contexts, where predators tend to be larger than their prey (Andersen et al. 2008; Barnes et al. 2010). On the other hand, very high trophic assimilation efficiencies (~90%) have been reported among some insect parasitoids, where size and nutrient requirements of predator and prey are exceptionally well matched (Harvey et al. 2006).

If the lives of predators and prey were equal in length and welfare quality on average, trophic assimilation efficiency would be decisive, and any value less than 100% would mean that introducing a predator species to a population of herbivores would reduce the total welfare of the community. In practice, these assumptions probably rarely hold. A more nuanced calculation of the welfare consequences of predation needs to take into account the actual effect of predation on prey welfare, as well as differences in average lifetime welfare between predator and prey individuals.

One of the most important knowledge gaps for understanding the net welfare value of predation in a given community is whether predator-caused mortality is additive, compensatory, or depensatory with alternative causes of death. What would the life and death of a prey animal have been like otherwise? Answering this requires understanding demographic patterns of mortality and welfare for the population in question, such as the average age at which prey are killed. For example, Carroll (2013) found that the removal of wolves and bears from the vicinity of McGrath, Alaska resulted in a doubling of the proportion of newborn moose surviving to adulthood (>2 years), but had a negligible effect on adult life expectancy, implying that predation in this system mainly threatens juvenile moose who might have had long lives ahead of them. Research into predator-induced stress, density-dependent welfare, and the relative severity of alternative causes of death will also help us understand the net impact of predators on the lives of their prey.

The concepts of ecotrophic efficiency and trophic assimilation efficiency seem valuable to account for in welfare-focused ecological restoration and novel ecosystems. For example, under conditions where predation is thought to lead to better welfare outcomes overall, the ecosystems with highest net welfare might be those with high populations of small herbivores, whose biomass would be more efficiently transferred to high-welfare predators at the end of their lives. On the other hand, when predation is thought to be net-negative or where high-welfare animal scavengers are present, systems dominated by ecotrophically inefficient species such as larger herbivores could contain greater overall welfare. In contexts where human activity is already influencing ecosystem composition, it is worthwhile to consider these potential welfare consequences in our planning.

Trophic interactions, by distributing energy among animals, are part of the welfare value of maintaining functioning ecological communities. Sustaining multiple biodiverse trophic levels leads to a greater proportion of primary productivity ultimately being converted into sentient animals. The quality of life these animals naturally experience remains highly uncertain, and many ecosystems are already being perturbed by human activities in ways that are not calculated to improve wild animal welfare. However, further research into trophic efficiencies and the welfare of predator-prey systems can prepare us to restore ecosystems in ways that benefit many animals, not just a few.

Alternatively, you could use the scientific method to design artificial sentient systems with high welfare output per resource input and harvest the ecosystem's production to power these. Or even better, use them to maximize human welfare because we're all human.