Note: Last year’s RC Forward cost-effectiveness analysis and this year’s update using 2019 data were independently written by Rethink Priorities (RP) staff researcher Neil Dullaghan, with oversight from Principal Research Manager David Moss. The analysis was conducted without involvement from the RC Forward team aside from the provision of data and clarification throughout the process. Appended to the analysis is additional commentary from the Rethink Charity staff on our budget, programs and related communications strategy.

RC Forward is a platform through which Canadians can make tax-advantaged donations to high-impact charities located inside and outside of Canada. The unique value of RC Forward is premised on the hypothesis that previously inaccessible tax incentives offered by this service would increase the donation total and individual gift volume.

This year’s update resembles the cost-effectiveness model published in last year's analysis of data from 2018, which includes discussion sections on our methods and assumptions, estimates regarding counterfactual incentive effects for donors,[1] and perceived limitations. This analysis builds upon the previous model by including probabilistic estimates [2] on 2019 data that allowed us to approximate a more detailed range of possibilities, rather than simply the best and worst case scenarios.[3] 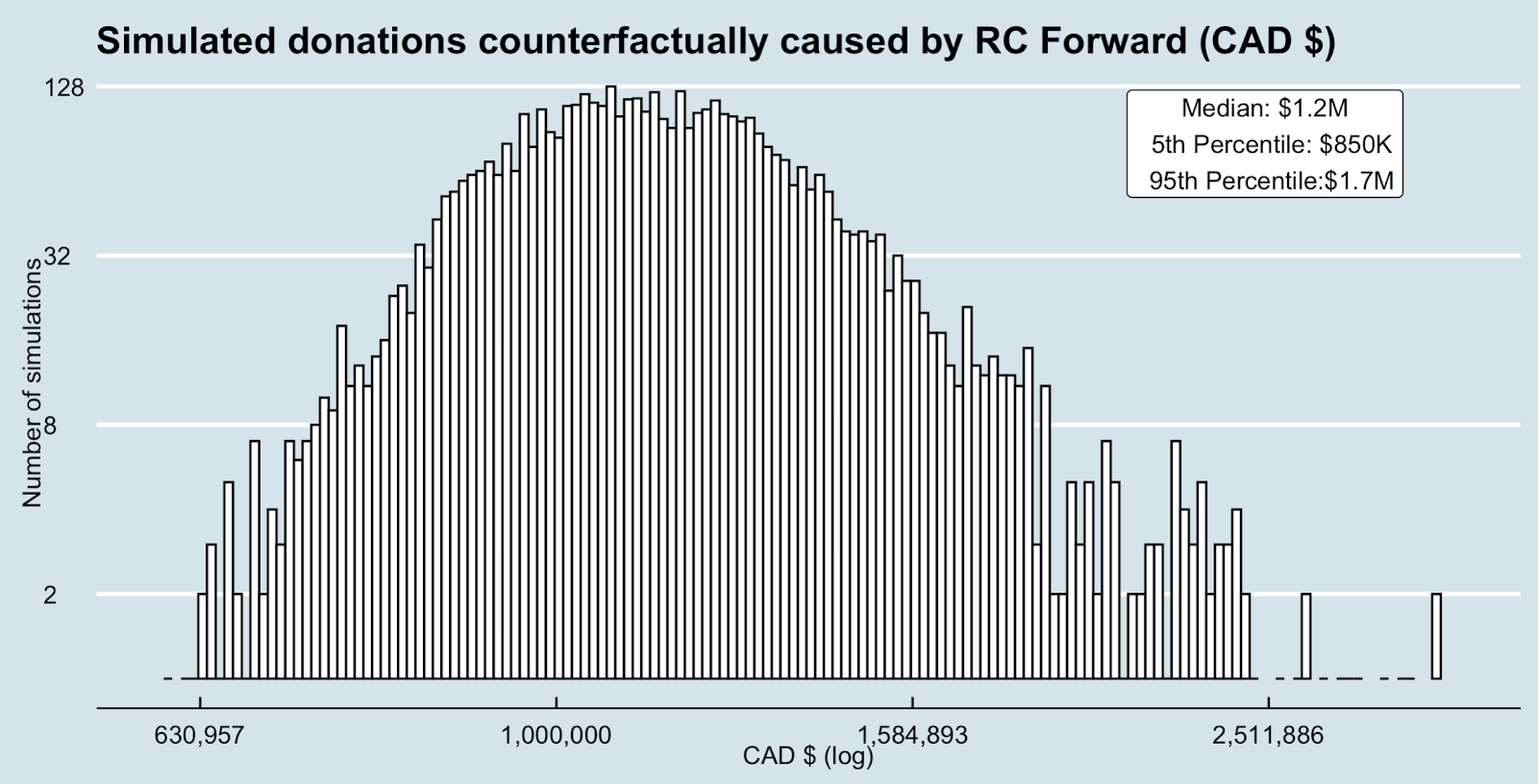 We estimate that the average $1 spent on RC Forward operations in 2019 allowed the program to move $4 – $10 to effective charities that they would not have otherwise received.[4] Our best guess of $6 is lower than last year's $13 due to higher operating costs (principally brought about by reallocation of staff time) and the absence of large one-off cryptocurrency donations.[5] 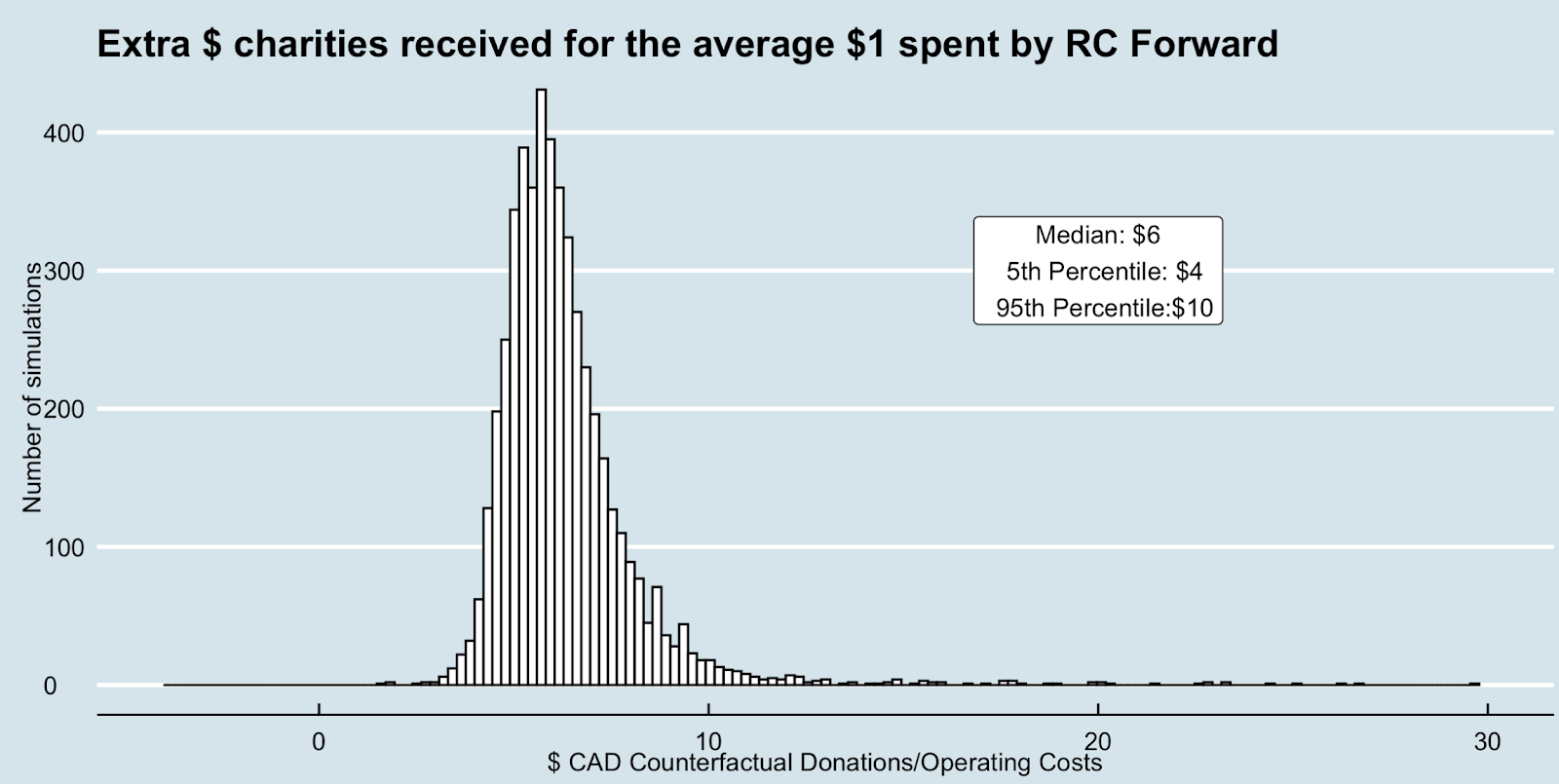 We should note that cost-effectiveness estimates are generally less robust than one expects. Analyses of this type are only approximations of uncertain quantitative parameters, which are potentially subject to bias and error. Much of the uncertainty is reflected in the ranges given, but exact numbers should not be taken as high-confidence precise estimates of the actual value of RC Forward’s impact.

Analysis by RC staff begins with this section.

The 2019 RC Forward Annual Report reconfirmed our announcement in Q1 that we would be allocating 4% of all donations to our operations due to a funding shortfall.[6] A poll of more than 70 donors conducted prior to the decision indicated that platform users and RC Forward operations funders were unable to tell how much effort went into running the platform. This uncertainty is understandable and thematically consistent with difficulty that Rethink Charity funders and donors[7] have had in tracking the degree to which projects are historically supported by the umbrella organization.

A number of additional factors have made the value of RC Forward tough to evaluate from an external perspective. We suspect there are primarily three reasons:

1) Confusion regarding time and resource allocation within Rethink Charity

An FTE breakdown across Rethink Charity is available here. Excluding Rethink Priorities staff and our part-time Tech Officer, 4 FTEs work across the Rethink Charity umbrella totaling ~$173K USD in salaries and benefits. Salaries are ~$42K on average. Roughly 2 FTE are projected to work directly on RC Forward, ~0.5 FTE provide operations support for Rethink Priorities, and a ~1.5 FTE is spent on organization-wide duties.

Since 2016, disparate Rethink Charity projects found strength in being housed under a single organization, sharing administrative, technical, legal, management and governance costs. Rethink Charity launched, incubated, and lent additional support to these initiatives, allowing projects to focus the vast majority of their time directly on programs.

Rethink Priorities, for example, was jump-started by receiving fiscal sponsorship and governance oversight, along with legal, administrative, and fundraising support. In short, the previous model of operating a project collective reduced overall costs for several impactful projects, bypassing the need to create entirely new organizations, or enter into very costly third-party fiscal sponsorships.

Narrowing our focus to RC Forward effectively means that the cost of running the entire organization – including costs associated with transitional support for RP, winding down previous projects, providing institutional support for EA Giving Tuesday, administrative work across foundations in two countries, and fundraising – are no longer shared between projects. Fundraising broadly for organization-wide costs has been quite difficult in our case, so in order to continue essential operations for RC Forward, the project will need to assume all costs and fundraising responsibilities of the entire organization.

A concrete example of an essential and nontrivial organization-wide expense is staff time spent on fundraising. Rethink Charity is in the privileged position of being supported by a broad network of small- to medium-sized donors. According to donation data from the 2019 EA Survey, Rethink Charity nonetheless came in at #16 ($61K) in terms of total amount fundraised.[8]

This broad donor base of individuals has been vital to keeping Rethink Charity afloat. It is also inherently more time intensive to maintain relative to major institutional support, requiring us to allocate a nontrivial portion of staff time to procure funding. The cost of fundraising ironically adds ~0.8 FTE, which would be dramatically reduced were Rethink Charity to consistently receive major grants. We have thus far been comfortable with trading this inefficiency for the counterfactual impact RC Forward has stably achieved over the years.

Due to inconsistent institutional funding and the inability to cover operating expenses from smaller donations alone, we’ve pivoted toward sustainably supplementing RC Forward operating costs by embarking on fiscal sponsorship and other forms of revenue generating activity.

2) Donor impressions from ease of use

While it has been a triumph to make tax-advantaged support for effective charities abroad a reality, it potentially leaves the impression that RC Forward is purely a technical endeavor that is largely automated. We have identified areas of investment where proprietary systems could automate a portion of the process, but unfortunately the project has not yet been in a financial position to make that investment.

Below we detail the mechanics of RC Forward and the supporting role played by Rethink Charity in the process. Please bear in mind we are currently streamlining these systems, and that the intricate process outlined has nonetheless resulted in a robust counterfactual multiplier.

– Reliance on third-party systems – Our fruitful partnership with Charitable Impact entails a double-edged reliance on their donation systems. This has allowed for vital integration with the RC Forward website for a smooth end-user experience, but unfortunately also means that we cannot directly address inefficiencies in the system. These inefficiencies include:

– Major donor assistance – RC Forward staff personally assist major donors in order to determine the best donation method for their specific circumstances. Solutions in this space are often customized and not easily templated. Past examples include securities conversions from Etherium, a cryptocurrency, and abiding by disbursement instructions from the board of a private foundation.

We also provide various methods of donations for donors wishing to save on credit card fees. Unlike credit card donations, each of these methods require additional administrative oversight. For that reason, we offset our administrative time by only offering these options to donors intending to give $200 or more per month, or a one-off donation of $1000.00.

3) Shortcomings in our communication regarding organizational composition, the RC Forward process, and roles of our staff

We recognize that shortcomings in our communication have resulted in confusion surrounding (a) successes we’ve had supporting various projects under the Rethink Charity umbrella and how that has affected time and resource allocation, and (b) the disparity between how complex our international regranting process is in reality compared to how it would seem from the outside.

Our ability to express fundraising needs has historically been hampered by these factors despite showing robust evidence for ongoing and significant counterfactual impact. Above, we provide our most detailed breakdown of time and money expenditures to date, as well as answers to questions commonly asked by funders and those looking to further understand the mechanics of RC Forward and Rethink Charity as a whole.

Our cost-sharing infrastructure and freedom with unrestricted funding has historically been both efficient and crucial for launching important projects for the EA community. We’ve struggled to properly communicate the upsides of running a project collective like this over the years, perhaps naively assuming that successful projects and public declarations of closing underperforming projects would speak for themselves. We could have done more to highlight just how much projects were aided by being a part of the Rethink Charity project collective model.

To briefly touch on one of these communication challenges, we’ve theorized that stakeholder and beneficiary interests are quite diffuse in the case of RC Forward, scattering the typical motivations why funders would continue to support a project. RC Forward provides a multiplier effect for charitable donations, and key partners such as The Humane League, Animal Charity Evaluators and the Good Food Institute have all stated their appreciation for the project, but donors understandably struggle to feel a direct connection with these outcomes. The platform is not straightforwardly an EA community (meta) project, and individual donors usually don't have the capacity to give enough to be considered potential 'funders' of our operations. Further, there are conflict of interest issues with granting to so many charities, disqualifying organizations from funding the platform in support of our work.[9]

We plan to improve our communications by publishing more frequent and detailed explanations of our budget and costs, displaying our reasoning publicly (as we have with previous projects), releasing cost-effectiveness analyses on an annual basis, increasing contact with donors and potential stakeholders, creating more open channels for feedback about our programs, and periodically revisiting our overall communications strategy. We hope this post is a first step towards becoming a more transparent organization and answering any questions the community might have.