The Triumph of Humanity Chart

Cross-posted from my blog here.

One of the greatest successes of mankind over the last few centuries has been the enormous amount of wealth that has been created. Once upon a time virtually everyone lived in grinding poverty; now, thanks to the forces of science, capitalism and total factor productivity, we produce enough to support a much larger population at a much higher standard of living.

EAs being a highly intellectual lot, our preferred form of ritual celebration is charts. The ordained chart for celebrating this triumph of our people is the Declining Share of People Living in Extreme Poverty Chart. 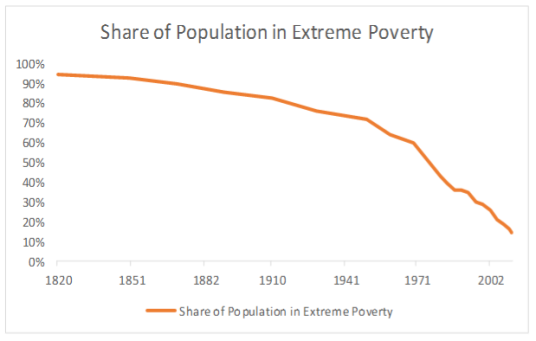 However, as a heretic, I think this chart is a mistake. What is so great about reducing the share? We could achieve that by killing all the poor people, but that would not be a good thing! Life is good, and poverty is not death; it is simply better for it to be rich.

As such, I think this is a much better chart. Here we show the world population. Those in extreme poverty are in purple – not red, for their existence is not bad. Those who the wheels of progress have lifted into wealth unbeknownst to our ancestors, on the other hand, are depicted in blue, rising triumphantly. 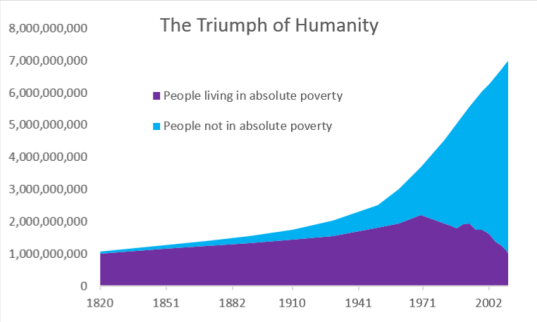 Long may their rise continue.

Great chart, and I've never seen it displayed that way. It really puts humanity's progress into perspective. Thanks for sharing.

I really like this. It did make me wonder how bad life really was for those in what the graph calls 'absolute poverty'

My initial response is 'quite bad' and, quoting Hobbes, that life was 'nasty, brutish and short'.

By then I thought about it a bit more and number of considerations occurred to me:

What do others think?