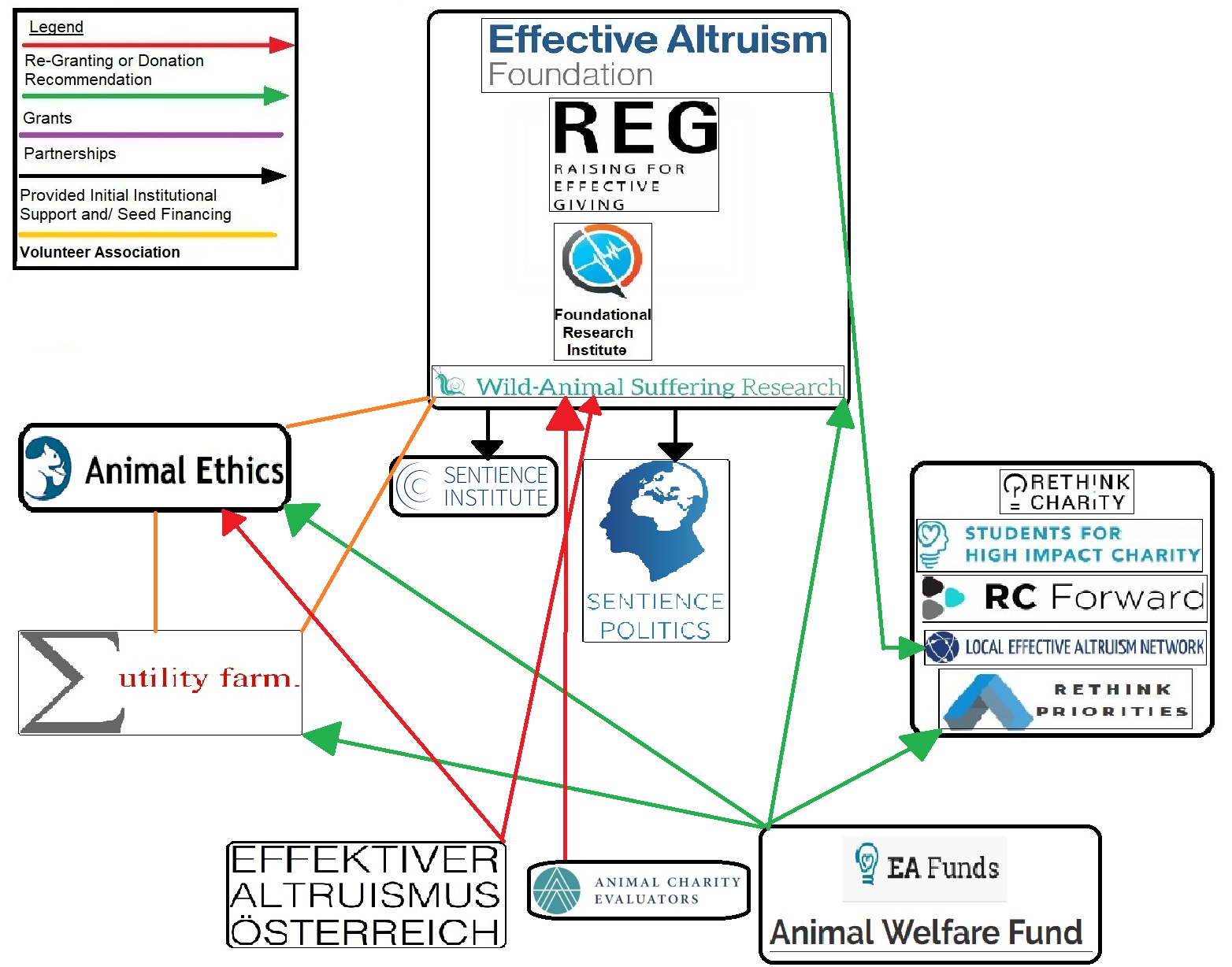 Stiftung für Effektiven Altruismus (SEA) is a regional foundation for the EA movement in the German-speaking world founded in 2013. They're also the professional home of Brian Tomasik in the EA movement, whose Essays on Reducing Suffering have significantly advanced the research agenda of the RWAS community over the last several years. Within the last couple years, SEA has streamlined their projects, and spun off multiple organizations. Welfare biology research initially incubated by SEA has been provided institutional support to become a new, separate organization: Wild Animal Suffering Research.

Wild Animal Suffering Research (WASR) was started as a project incubated by SEA in 2016, and became its own organization in 2017. WASR's goal is to do basic multi-disciplinary research to develop strategies and narrow interventions to reduce wild animal suffering, and build up a community of researchers and advocates to help achieve this end.

Animal Ethics (AE) is a movement-building and advocacy organization focused on reaching out to effectively inform and educate the public about the conditions all kinds of animals face, and provide resources for animal advocates, started in 2012. In previous years, AE's primary focus was public outreach in multiple languages on farm and wild animal welfare in countries around the world. While this is still part of their activities, in 2017 AE pivoted to dedicating more resources to advancing the development of welfare biology as a field of academic inquiry and scientific research. Originally based in Spain, their teams and projects have become increasingly international.

Utility Farm (UF) is an American non-profit organization founded in 2017 focused on publishing qualitative research and grassroots movement-building to reduce wild animal suffering. Their three programs are research, focused on social science research relevant to communications and movement-building; outreach, to grow the RWAS network by connecting to funders, researchers, and advocates; and stewardship, to develop and eventually trial a variety of interventions.

Rethink Priorities (RP) is an empirical prioritization project launched in 2018. It is an independent project operating under the umbrella of Rethink Charity, an EA movement-building organization running a wide variety of projects. RP focuses on relevant to welfare biology and reducing wild animal suffering, such as the study of insect sentience; the neurobiology/neuropsychology of non-human animal experience; and interventions for improving fish welfare.

In 2018, all these organizations received grants from the EA Animal Welfare Fund, part of the EA Funds project run by the Centre for Effective Altruism (CEA), run by Lewis Bollard of the Open Philanthropy Project.

The Hedonistic Imperative and the Abolitionist Project are research projects focused on how future biotechnology and nanotechnology will allow the bio-engineered abolition of suffering for life on Earth, including in wild animals. It was founded by transhumanist philosopher David Pearce, maintained with help from Andres Gomez Emilsson of the Qualia Research Institute. Since further research and development of interventions based on this theoretical research will depend on future technologies, these projects in practice share more in common with EA interventions aimed at the long-term future as opposed to wild animal suffering in the present. However, the Hedonistic Imperative and its community of supporters have been major contributors to RWAS movement-building over the last several years.

In 2017, SEA spun off two other projects as their own organizations: Sentience Politics, an anti-speciesist political think tank in the German speaking world; and the Sentience Institute, which does social science and ethics research on anti-speciesism, moral circle expansion, and movement-building. Both organizations are primarily focused on farm animal welfare, but they support RWAS efforts, with their lessons learned in movement-building through research and advocacy applicable to RWAS movement-building as well.

Animal Charity Evaluators is also primarily focused on farm animal welfare, but has done exploratory research into wild animal welfare as a focus area. Through their Animal Advocacy Welfare Fund, has also made a research grant to WASR.

Finally, Verein zur Forderung des Effektiven Altruismus (The Association for the Promotion of Effective Altruism), the regional EA foundation for Austria, has regranted donations from Austrian effective altruists internationally for organizations like WASR and UF.

Hey Evan Gaensbauer, this is great! Thanks for putting it together.

Though, of course, it is hard to represent all these organizations. Some nitpicks:

3.) I don't think Rethink Priorities has any volunteer partnerships with any other organizations yet.

4.) Rethink Priorities has received grant money from the EA Foundation in addition to the EA Animal Welfare Fund.

5.) While this is clear from your text, it's not clear in your image: Sentience Institute and ACE have also received grants from the EA Animal Welfare Fund.

6.) It might be nice to make the direction of these relationships clear with arrows.

I made the changes regarding RP in points 1 through 5. I'll add the arrows as well.

I don't think Rethink Priorities has any volunteer partnerships with any other organizations yet.

I'm aware, but SI and ACE received grants funding activity related to farm animal welfare, not wild animal welfare. I'm also going to do an ecosystem map and directory for effective animal advocacy/farm animal welfare in EA as well. So I was going to include references to the Animal Welfare Fund's grants to ACE and Si in that post. It's ambiguous to me if I should include them in this post as well. What do you think?