I would like to introduce the first outcome of our efforts to create merchandise promoting the concept of effective giving, specifically through the idea of being a Superdonor.

For those of you not familiar with earlier discussions, the purpose is to delineate effective altruist ideas from the movement itself, and promote these ideas in a fun and engaging form as "effective giving." The goal is to get people emotionally engaged and excited about channeling their giving toward effective charities, while preventing a flood of new members into the EA movement itself, thus diluting the movement (more on this concern here).

The Superdonor concept is one path to appealing to people's emotions and encouraging engagement with effective giving, without necessarily leading to the EA movement itself. Encouraging people to be Superdonors, meaning channeling their money to effective charities instead of ineffective ones and thus greatly multiplying the impact of their giving, can be done in a fun and engaging way, while also minimizing the problem of flooding the EA movement. Moreover, it highlights the benefits of everyday heroism, as opposed to singular and epic heroism.

Here are the results of our work. We specifically focused on pride as an emotion since it worked for many other social movements as an inspiring message. I would appreciate your feedback on whether you think these shirts would serve the purpose outlined above. Would you or other EAs you know enjoy wearing them, and using them to share about effective giving in your conversations with non-EAs? 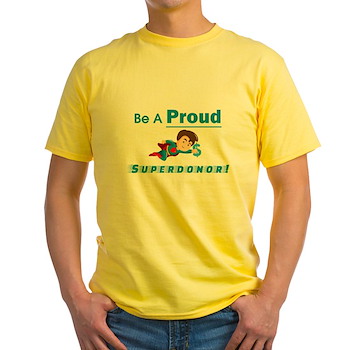 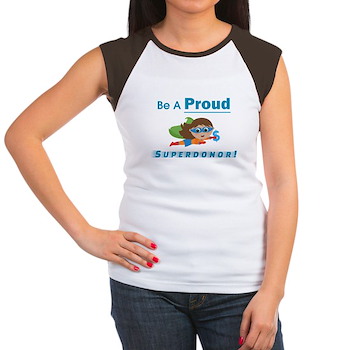 P.S. Note that the Superdonor concept is something we came up with Jon Behar from The Life You Can Save, so not claiming full credit for that one :-)

P.P.S. This article is part of the EA Marketing Resource Bank project lead by Intentional Insights and the Local Effective Altruism Network, with support from The Life You Can Save.

As kbog has already expressed similar thoughts, I'm also quite concerned the description "superdonor" is quite offputting.

If at all, I'd prefer something that doesn't signal moral superiority as much, e.g. "'I've decided to donate 10% of my income - ask me why!". But in general I'm not particularly convinced that this is a good strategy at all.

Thanks for the feedback! I replied to the specific concerns raised by kblog below.

Good idea about the additional quote, I will put that into the hopper for our further work! Our broader orientation is to create a wide variety of quotes/images. Marketing literature strongly suggests that the best strategy is audience segmentation, so having different content for different audiences. Thus, we'll create a variety of shirts with different slogans.

What would you like to change about the design?

My gut reaction to this is pretty negative. I've considered donating to be a sort of obvious thing that you have to do if you don't want to be personally responsible for unnecessary death and suffering, and something that's expected rather than something that you can brag about. So seeing things promoted in this way strikes me as, well, shallow marketing. But don't get me wrong, I'm fine with marketing moral obligations if that's what it takes to get more people to give their money. I read somewhere else that you shouldn't fall prey to the fallacy of assuming that other people will think the same way that you do, so I shouldn't assume that other people will also have a negative reaction to this. If this works to convince more people to give their money then great, I'm all for it. My gut reaction is negative but my think-about-it reaction is not. I hope I'm not derailing the conversation or the spirit of your project, I'm just giving you my data point as an example of how some people might have negative psychological reactions.

But how do you think the average person might view this? I thought it was pretty straightforward that people are disturbed and made uncomfortable by other people's signalling of moral superiority. That's why people get bothered by vegans and altruists, even if they're not bragging at all, just because they are made uncomfortable and feel inferior in the presence of do-gooders.

Moreover, I can imagine plenty of EA critics using this as a great example of philanthropy becoming a cultural fetish that gives people psychological rationalization to dodge personal responsibility for participation in capitalism and avoiding systemic change. It plays right into the hands of Zizek et al. But I haven't heard much from that crowd lately, so I don't know if they're still relevant.

Kblog, thanks for the feedback!

First, let me commend you for avoiding the typical mind fallacy. I think it's very cool that you are able to draw that difference between that intuitive "ugh" gut reaction and the think-about-it reaction.

Indeed, it's a valuable data point. I think it gets to the heart of the matter. The Superdonor concept is not personally appealing to me, and to many other EAs. However, it is appealing to many people who wish to donate for reasons other than "it's the obvious thing to do."

Regarding your point about marketing moral obligations, here are some other reasons people give and ways that the Superdonor concept can appeal to them, which I outlined in the earlier Superdonor post.

Superdonor conveys the feeling of power – you can be super in your donations! Superdonor conveys an especially strong degree of generosity. Superdonor conveys a feeling of superiority, as in better than other donors. In other words, even if you donate less, if you donate more effectively, you can still be better than other donors by donating more effectively. This appeals to the “Keeping Up With the Joneses” effect, a powerful force in guiding our spending. Just as importantly, “Be a Superdonor!” is easily shareable on social media, a vital component of modern marketing in the form of social proof. People get to show their pride and increase their social status by posting on their Facebook or Twitter how they are a Superdonor. This makes their friends curious about what it means to be a Superdonor, since that is an appealing and emotionally resonant phrase.

Regarding how the average person views this, Intentional Insights is currently test-marketing this phrase through publishing articles featuring the Superdonor concept. So far, it seem quite appealing. For example, this article in The Huffington Post highlighting the Superdonor concept, and has already been shared quite a bit on social media, for example over a 150 times on StumbleUpon alone.

I generally don't perceive the Zizek et. al. crowd as relevant. All talk, no action.

I personally don't care for the design whatsoever but certainly agree with spreading the word through some form of apparel that sparks curiosity. I think that something more empowering would be a better approach. The EA logo is a great design - I like the idea of black or white shirts with the EA logo and some sort of message like " Do Good Better". I'd be happy to mock something up if you have a hi-res photo of the EA logo.

Can you send me an email at gleb@intentionalinsights.org to chat more about doing some mock-ups? We have a number of ideas, and if you have graphic design skills, this could be a good area of collaboration :-)

I agree with many of the comments here, so I won't beat a dead horse. But one thing that no one mentioned is that there have been concerns about diversity in EA. If you choose to use images of people in advertising (of any kind), it's nice to represent more diverse demographics. :)

Lila, very much agreed! Here's a piece where I did exactly that in piece marketing effective giving :-)

As anecdotal as it gets, but running a booth at the Vegan Summer Festival in Berlin I got the feeling that this “behold your tremendous power to change the world” rhetoric worked best from among a few spontaneous ideas I had as a first hook to get people’s attention.

Cool, thanks for that feedback!