This post introduces a spreadsheet which visualizes numbers of corporate cage-free and broiler commitments made in different years, regions, and industries. The data for the spreadsheet is taken from chickenwatch.org.

I made this spreadsheet because it is very easy to do and because it could be mildly useful for understanding the situation better. When analyzing it, it's very important to keep in mind that commitments vary in size a lot. For example, a recent KFC broiler commitment is set to benefit the lives of 72 million animals every year. In contrast, many commitments might affect a single one-building hotel or a restaurant and benefit less than a thousand animals per year. Hence, if some year has more commitments, it doesn't follow that it was more successful. I think that there is a high variance in the average size of commitments in different years and a very high variance in the average size in different countries. E.g., commitments that only apply to one small country (e.g., Lithuania) tend to be smaller on average.

Sample graphs from the spreadsheet 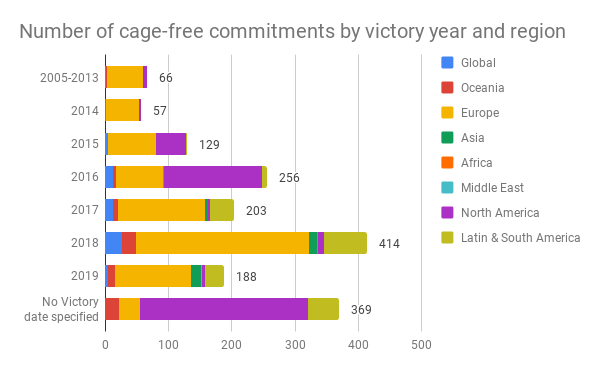 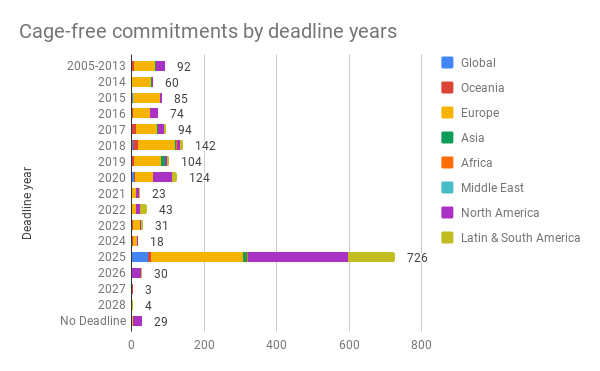 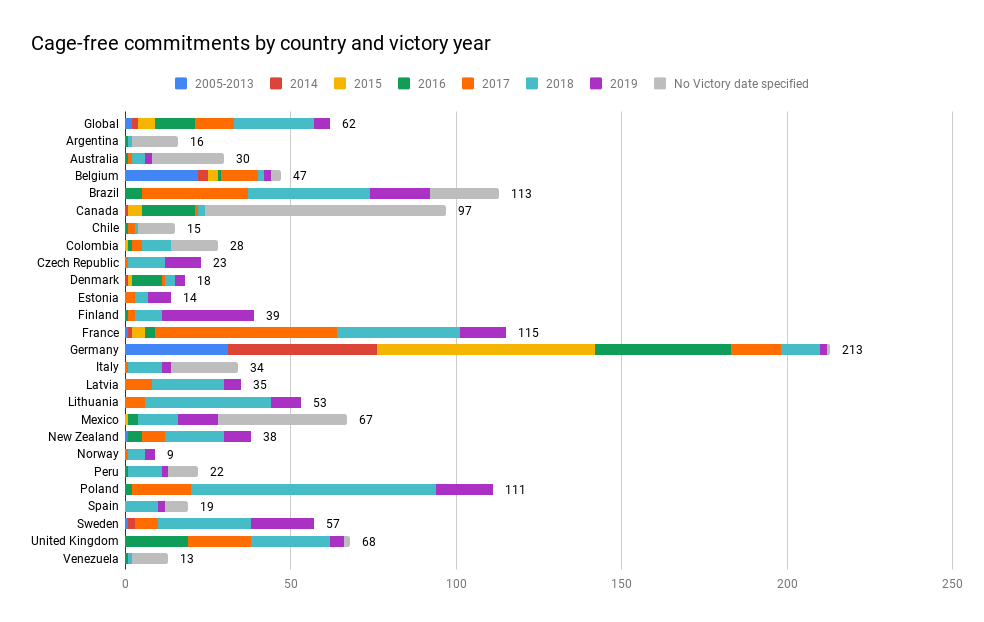 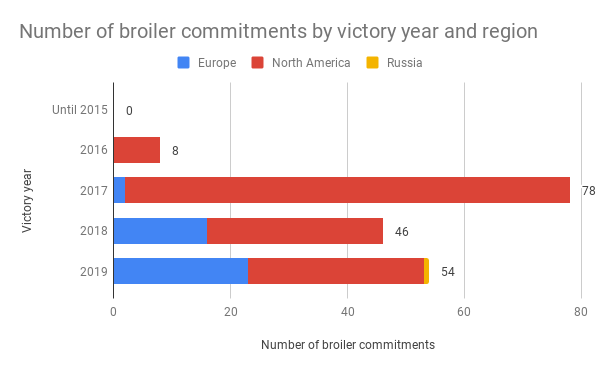 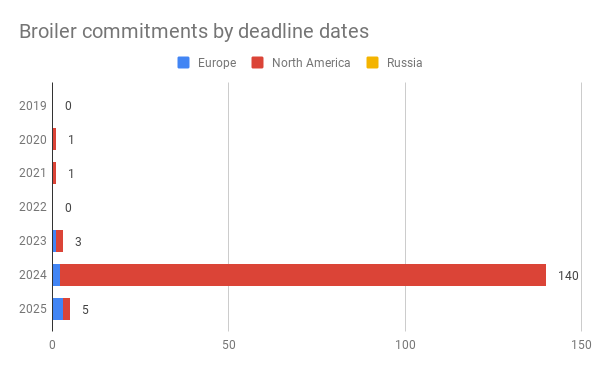 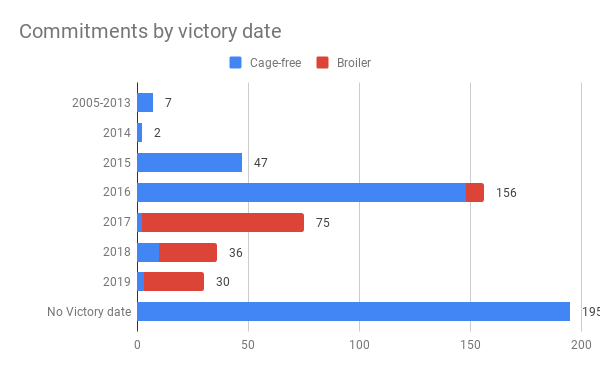 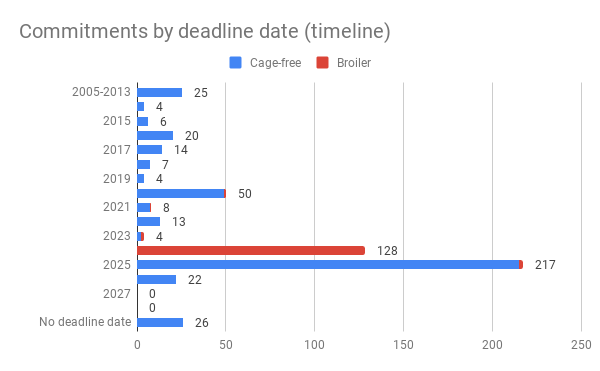 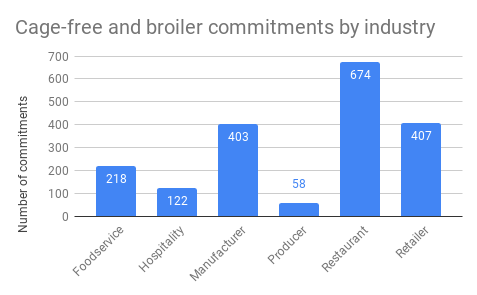 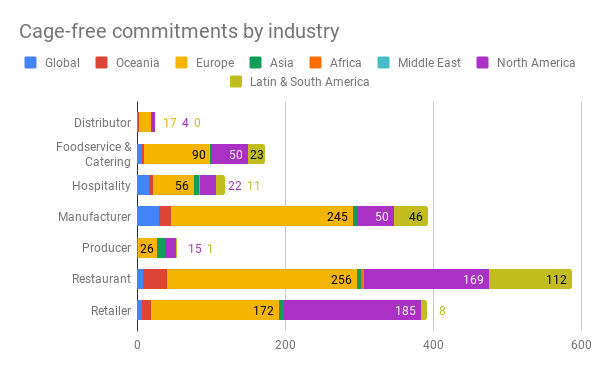 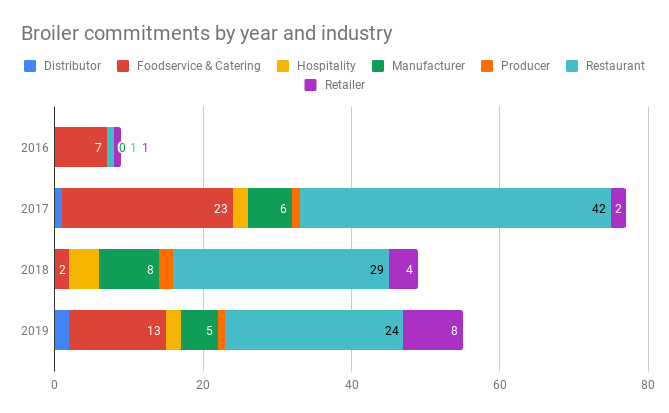 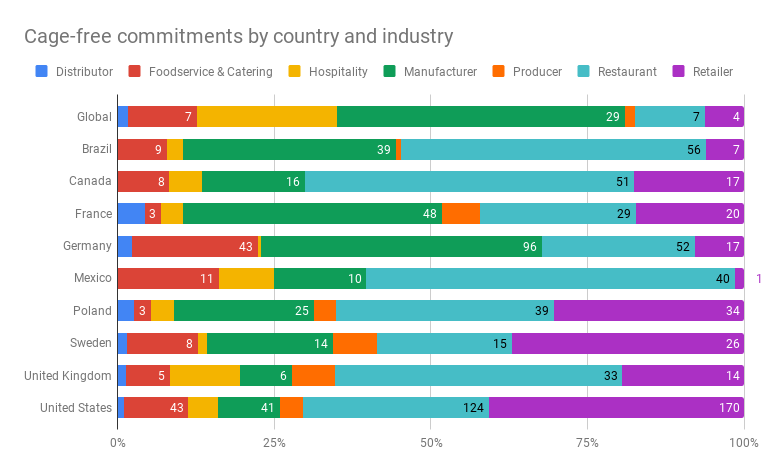 Many more graphs and tables can be found in the spreadsheet.

Notes about the spreadsheet

As mentioned before, the graphs above are of limited use because they estimate the numbers of commitments, not how many animals are affected by those commitments. I tried to do an analysis that does take commitment sizes into account. I did it to check if some people are correct to claim that corporate campaigns have been less cost-effective in the last few years than in the years before. However, I could neither confirm nor deny this claim because:

As a result of these problems, no conclusions can be made from my analysis that tries to account for commitment sizes. If you want to see the analysis anyway, you can do it here.

As part of the analysis, I estimated sizes of some European broiler commitments here. However, as explained above, these estimates are very unreliable.

Why we shouldn't overreact to year-by-year results

Even if better estimates of commitment sizes were made, I think it's important to not overreact to year-by-year results of corporate campaigns for a variety of reasons:

This article is a project of Rethink Priorities. If you like our work, please consider subscribing to our newsletter. You can see all our work to date here. The article was written by Saulius Šimčikas.

Great summary, thanks. It could be more useful to view the "Broiler commitments by deadline date" graph to show year 2026 as this is the deadline of the European Chicken commitment and ~90% of European commitments have that deadline.