The Most Important Century

The Duplicator: Instant Cloning Would Make the World Economy Explode

This is the second post in a series explaining my view that we could be in the most important century of all time. Here's the roadmap for this series.

I explore the simple question of how the world would change if people could be "copied." I argue that this could lead to unprecedented economic growth and productivity. Later, I will describe how digital people or advanced AI could similarly cause a growth/productivity explosion.

When some people imagine the future, they picture the kind of thing you see in sci-fi films. But these sci-fi futures seem very tame, compared to the future I expect.

In sci-fi, the future is different mostly via:

The future I picture is enormously bigger, faster, weirder, and either much much better or much much worse compared to today. It's also potentially a lot sooner than sci-fi futures:[1] I think particular, achievable-seeming technologies could get us there quickly.

Such technologies could include "digital people" or particular forms of advanced AI - each of which I'll discuss in a future piece.

For now, I want to focus on just one aspect of what these sorts of technology would allow: the ability to make instant copies of people (or of entities with similar capabilities). Economic theory - and history - suggest that this ability, alone, could lead to unprecedented (in history or in sci-fi movies) levels of economic growth and productivity. This is via a self-reinforcing feedback loop in which innovation leads to more productivity, which leads to more "copies" of people, who in turn create more innovation and further increase productivity, which in turn ...

In this post, instead of directly discussing digital people or advanced AI, I'm going to keep things relatively simple and discuss a different hypothetical technology: the Duplicator from Calvin & Hobbes, which simply copies people.

How the Duplicator works

The Duplicator is portrayed in this series of comics. Its key feature is making an instant copy of a person: Calvin walks in, and two identical Calvins walk out.

This is importantly different from the usual (and more realistic) version of "cloning," in which a person's clone has the same DNA but has to start off as a baby and take years to become an adult.[2]

To flesh this out a bit, I'll assume that:

It seems that much of today's economy revolves around trying to make the most of "scarce human capital." That is:

The Duplicator would remove these bottlenecks. For example:

(The ability to make copies for temporary purposes - and run them at different speeds - could further increase efficiency, as I'll discuss in a future piece about digital people.)

To answer, I'm going to briefly summarize what one might call the "Population growth is the bottleneck to explosive economic growth" viewpoint.

I would highly recommend reading more about this viewpoint at the following links, all of which I think are fascinating:

In standard economic models, the total size of the economy (its total output, i.e., how much "stuff" it creates) is a function of:

That is, the economy gets bigger when (a) there is more labor available, or (b) more capital (~everything other than labor) available, or when (c) productivity ("output per unit of labor/capital") increases.

The total population (number of people) affects both labor and productivity, because people can have ideas that increase productivity.

One way things could theoretically play out in an economy would be:

The economy starts with some set of resources (capital) supporting some set of people (population).

(Thanks to María Gutiérrez Rojas for these graphics.)

This set of people comes up with new ideas and innovations.

This leads to some amount of increased productivity, meaning there is more total economic output.[6]

This means people can afford to have more children. They do, and the population grows more quickly.

Because of that population growth, the economy comes up with new ideas and innovations faster than before (since more people means more new ideas).[7]

When you incorporate this full feedback loop into economic growth models,[8] they predict that (under plausible assumptions) the world economy will see accelerating growth.[9] "Accelerating growth" is a fairly "explosive" dynamic in which the economy can go from small to extremely large with disorienting speed.

The pattern of growth predicted by these models seems like a reasonably good fit with the data on the world economy over the last 5,000 years (see Modeling the Human Trajectory, though there is an open debate on this point; I discuss how the debate could change my conclusions here). However, over the last few hundred years, growth has not accelerated; it has been "constant" (a less explosive dynamic) at around today's level.

Why did accelerating growth transition to constant growth? 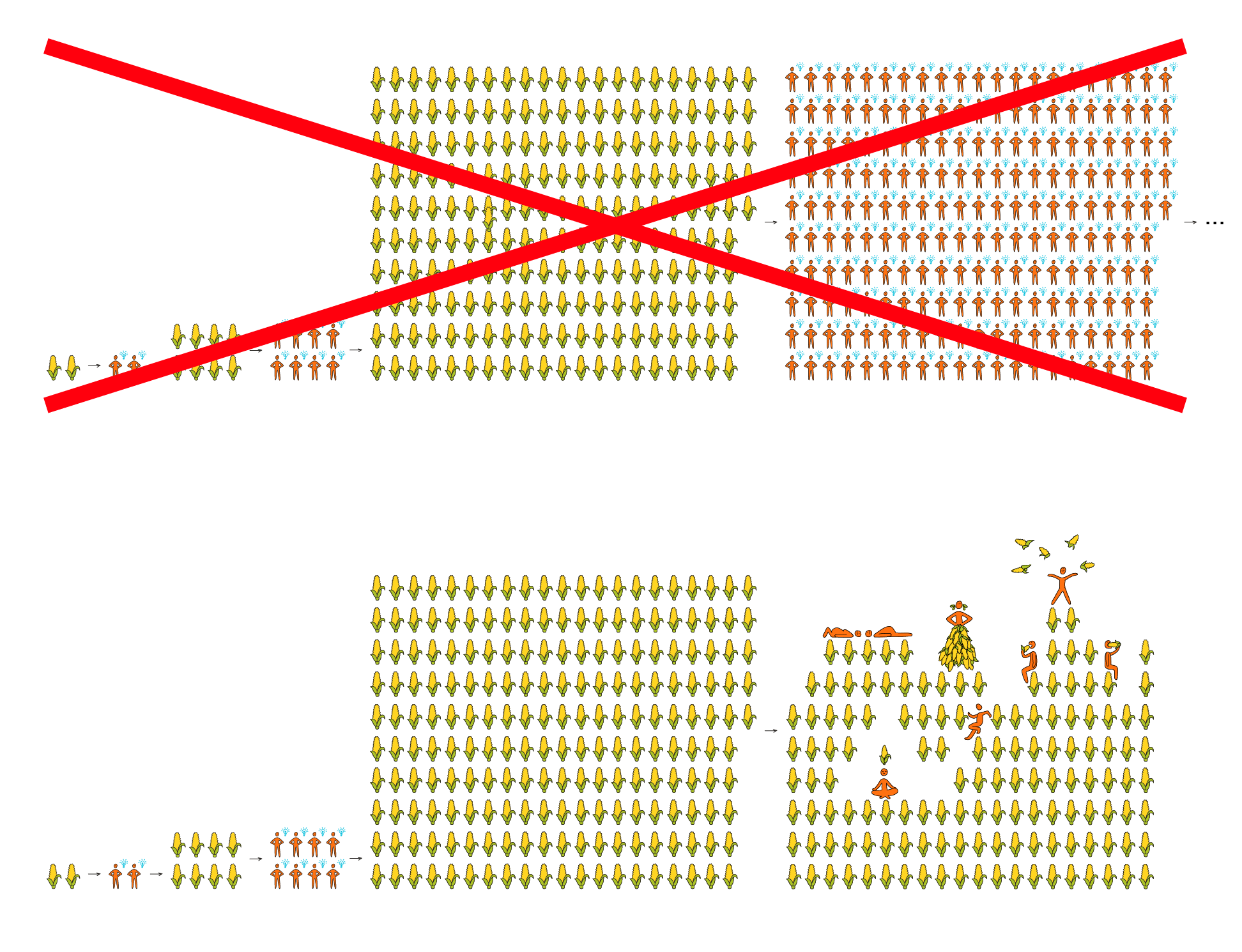 Raising children is a massive investment (of time and personal energy, not just "capital"), and children take a long time to mature. By changing what it takes to grow the population, the Duplicator could restore the accelerating feedback loop. 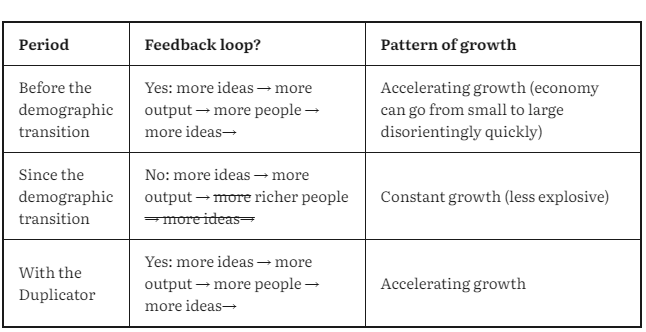 This figure from Could Advanced AI Drive Explosive Economic Growth? illustrates how the next decades might look different with steady exponential growth vs. accelerating growth: 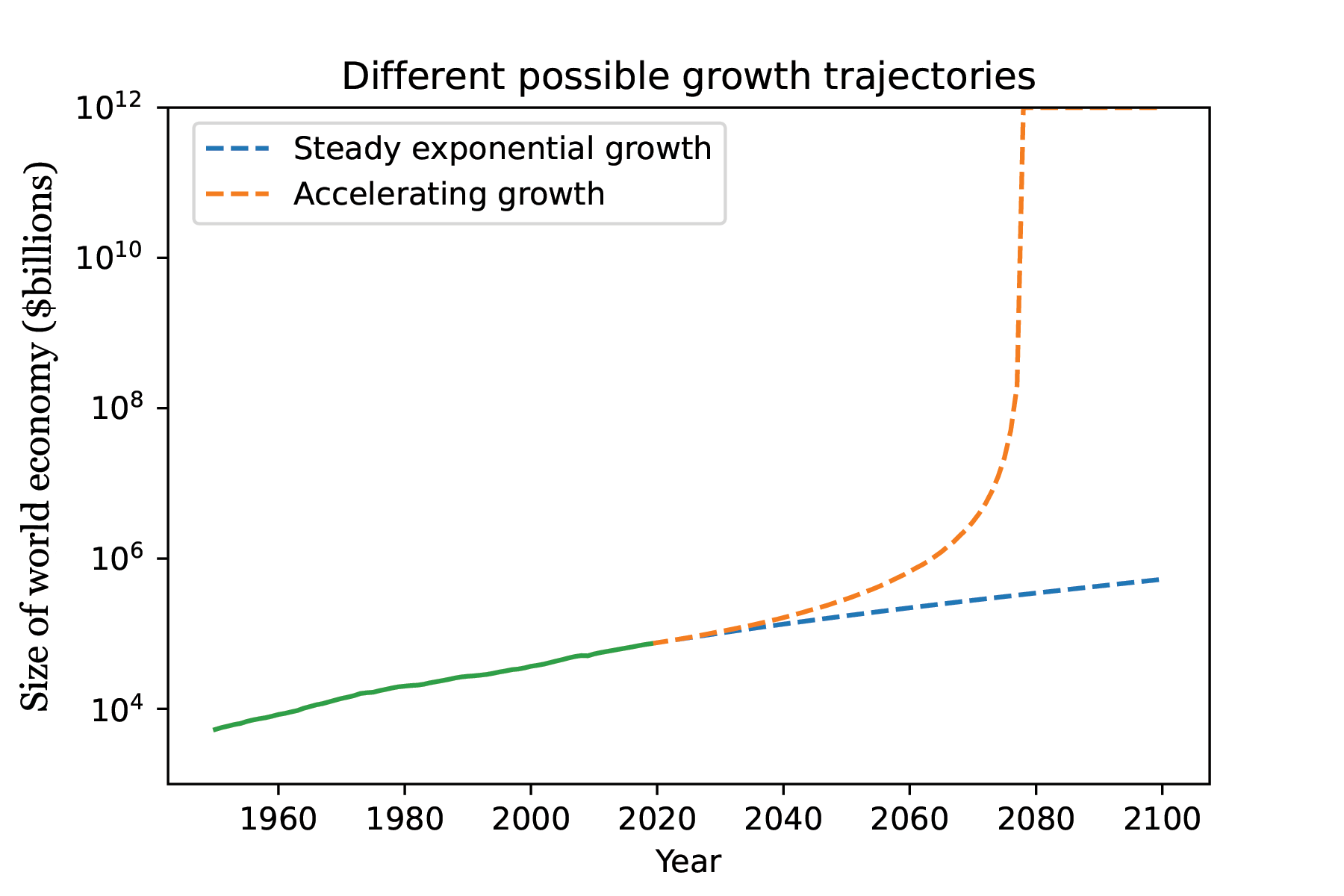 If we wanted to guess what a Duplicator might do in real life, we might imagine that it would get back to the kind of acceleration the world economy had historically, which loosely implies (based on Modeling the Human Trajectory) that the economy would reach infinite size sometime in the next century.[11]

Of course, that can't happen - at some point the size of the economy would be limited by fundamental natural resources, such as the number of atoms or amount of energy available in the galaxy. But in between here and running out of space/atoms/energy/something, we could easily see levels of economic growth that are massively faster than anything in history.

Over the last 100 years or so, the economy has doubled in size every few decades. With a Duplicator, it could double in size every year or month, on its way to hitting the limits.

Depending on how things played out, such productivity could result in an end to scarcity and material need, or in a dystopian race between different people making as many copies of themselves as possible in the hopes of taking over the population. (Or many in-between and other scenarios.)

I think the Duplicator would be a more powerful technology than warp drives, tricorders, laser guns[12] or even teleporters. Minds are the source of innovation that can lead to all of those other things. So being cheaply able to duplicate them would be an extraordinary situation.

A harder-to-intuit, but even more powerful, technology would be digital people, e.g., the ability to run detailed simulations of people[13] on a computer. Such simulated people could be copied Duplicator-style, and could also be sped up, slowed down, and reset, with virtual environments that were fully controlled.

I think that sort of technology is probably possible, and I expect a world with it to be even wilder than a world with the Duplicator. I'll elaborate on this in the next piece.

This is a very good longtermist piece. Is the short-termist interpretation that we should try very hard to clone John von Neumann?

My aim was to argue that a particular extreme sort of duplication technology would have extreme consequences, which is important because I think technologies that are "extreme" in the relevant way could be developed this century. I don't think the arguments in this piece point to any particular conclusions about biological cloning (which is not "instant"), natalism, etc., which have less extreme consequences.

I'm not familiar with predictions about this Duplicator technology. Is this a real prospective technology that would duplicate people's minds and bodies, or is it just their minds? Or is the actual predicted technology you're concerned about really digital people or advanced AI and it was just easier to explain the ideas with this similar fictional Duplicator technology?

I think your duplicator might be an analog to  extreme productivity gains. Those that we are seeing, in spaces where researchers are deploying narrow ai in their respective fields. Semiconductor design and protein folding are the most recent  breakthroughs i have come across. These developments have improved the performance of a single reacher by an order of magnitude and the discoveries or advancements made from these improvements will most likely be handled by newer narrow ais and the self reinforcing loop starts again. Not duplicators per se but perhaps the start of a very intense cycle of improvement and advancement. Also as the narrow ai tool kit becomes standardized and more accessible it will be deployed across more fields and we are likely to see it as a necessary piece of lab equipment perhaps as ubiquitous as the spreadsheet became in the 90s 2000s.

Question, if this holds true, then do you think that in the short-term EAs should focus more on either a) having more children (with the assumption that their children are more likely to become innovators), or b) if they don't many any/many children, help financially support others that do want many children with the same assumption as before? Or do you think that using that income elsewhere, such as global health, would do a better job of increasing total productivity and leading to developing something like digital people?