I am a research analyst at the Center on Long-Term Risk.

Sorted by New
78The optimal timing of spending on AGI safety work; why we should probably be spending more now1mo
9
57Neartermists should consider AGI timelines in their spending decisions4mo
4
103Replicating and extending the grabby aliens model8mo
24
1Tristan Cook's Shortform2y
8

The optimal timing of spending on AGI safety work; why we should probably be spending more now
Tristan Cook10d30

And thanks for the suggestion, I've created a version of the model using a Monte Carlo simulation here :-)

This is a short follow up to my post on the optimal timing of spending on AGI safety work which, given exact values for the future real interest, diminishing returns and other factors, calculated the optimal spending schedule for AI risk interventions.

This has also been added to the post’s appendix and assumes some familiarity with the post.

Here I consider the most robust spending policies and supposes uncertainty over nearly all parameters in the model[1] Inputs that are not considered include: historic spending on research and influence, rather than finding the optimal solutions based on point estimates and again find that the community’s current spending rate on AI risk interventions is too low.

My distributions over the the model parameters imply that

I recommend entering your own distributions for the parameters in the Python notebook here[3]. Further, these preliminary results use few samples: more reliable results would be obtained with more samples (and more computing time).

I allow for post-fire-alarm spending (i.e., we are certain AGI is soon and so can spend some fraction of our capital). Without this feature, the optimal schedules would likely recommend a greater spending rate.

Caption: The results from a simple optimiser[4], when allowing for four spending regimes: 2022-2027, 2027-2032, 2032-2037 and 2037 onwards. This result should not be taken too seriously: more samples should be used, the optimiser runs for a greater number of steps and more intervals used. As with other results, this is contingent on the distributions of parameters.

Caption: An example real interest function r(t), cherry picked to show how our capital can go down significantly. See here for 100 unbiased samples of r(t). 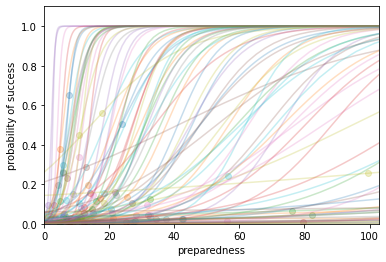 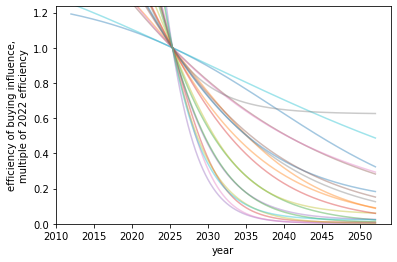 This short extension started due to a conversation with David Field and comment from Vasco Grilo; I’m grateful to both for the suggestion.

Previously the benefactor has been Carl Shulman (and I'd guess he is again, but this is pure speculation). From 2019-2020 donor lottery page:

Carl Shulman will provide backstop funding for the lotteries from his discretionary funds held at the Centre for Effective Altruism.

The funds mentioned are likely these $5m from March 2018:

This is great to hear! I'm personally more excited by quality-of-life improvement interventions rather than saving lives so really grateful for this work.

Echoing kokotajlod's question for GiveWell's recommendations, do you have a sense of whether your recommendations change with a very high discount rate (e.g. 10%)? Looking at the graph of GiveDirectly vs StrongMinds it looks like the vast majority of benefits are in the first ~4 years

When LessWrong posts are crossposted to the EA Forum, there is a link in EA Forum comments section:

This link just goes to the top of the LessWrong version of the post and not to the comments. I think either the text should be changed or the link go to the comments section.

Reply
Our recommendations for giving in 2022
Tristan Cook16d52

In this recent post from Oscar Delaney they got the following result (sadly doesn't go up to 10%, and in the linked spreadsheet the numbers seem hardcoded)

BOAS means good in Portuguese, clearly explaining what we do in only four letters!

Increasing/decreasing one's AGI timelines decrease/increase the importance [1] of non-AGI existential risks because there is more/less time for them to occur[2].

Further, as time passes and we get closer to AGI, the importance of non-AI x-risk decreases relative to AI x-risk. This is a particular case of the above claim.

These seem neat! I'd recommend posting them to the EA Forum - maybe just as a shortform - as well as on your website so people can discuss the thoughts you've added (or maybe even posting the thoughts on your shortform with a link to your summary).

For a while I ran a podcast discussion meeting at my local group and I think summaries like this would have been super useful to send to people who didn't want to / have time to listen. As a bonus - though maybe too much effort - would be generating discussion prompts based on the episode.