Unfortunately, people sometimes mistakenly use one of these terms as if synonymous for another of these terms, or mistakenly present one concept as entirely fitting as a subset of another. Other times, people discuss these concepts in complete isolation from each other, which is not a mistake, but may sometimes be a missed opportunity.

In reality, there are important distinctions and important overlaps between these terms and concepts. So this post reviews definitions and descriptions of those four types of catastrophes, discusses how they relate to each other, and presents three Venn diagrams (which include example scenarios) to summarise these points. I hope this can help increase the conceptual clarity of discussions and thinking regarding longtermism and/or large-scale risks.

This post primarily summarises and analyzes existing ideas, rather than presenting novel ideas.

(For those interested, I’ve previously collected links to works on collapse and on dystopia.)

We could thus represent the relationship between the concepts of existential catastrophe, extinction, and failed continuation via the following Venn diagram:[4] 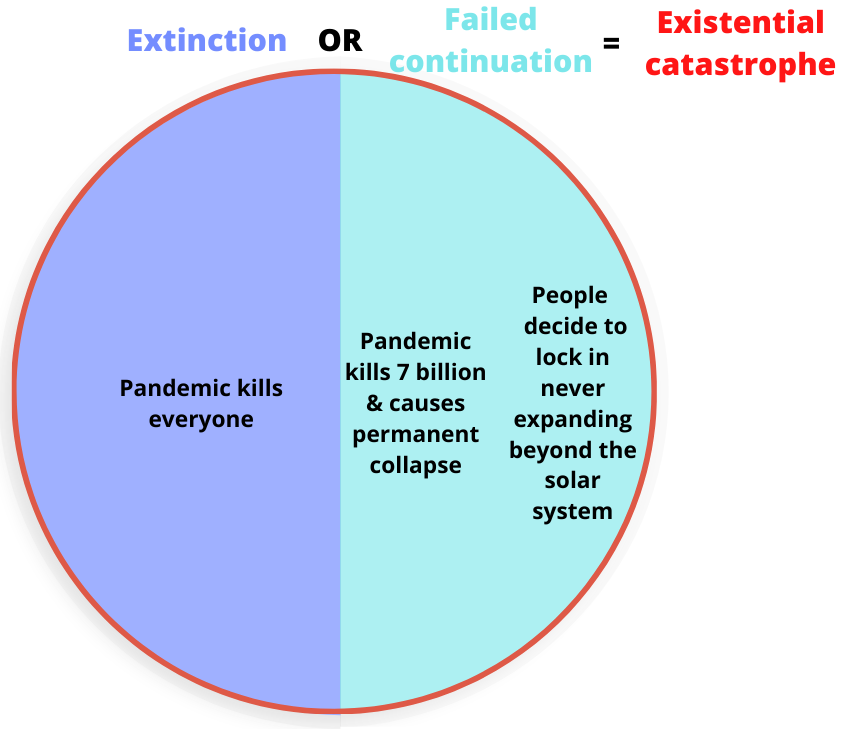 I’ve included in that Venn diagram some example scenarios. Note that:

Multiple definitions of global catastrophic risks have been proposed, some of which differ substantially. I’ll use the loose definition provided by Bostrom & Ćirković (2008, p.1-2) in the book Global Catastrophic Risks:

The term 'global catastrophic risk' lacks a sharp definition. We use it to refer, loosely, to a risk that might have the potential to inflict serious damage to human well-being on a global scale.

[...] a catastrophe that caused 10,000 fatalities or 10 billion dollars worth of economic damage (e.g., a major earthquake) would not qualify as a global catastrophe. A catastrophe that caused 10 million fatalities or 10 trillion dollars worth of economic loss (e.g., an influenza pandemic) would count as a global catastrophe, even if some region of the world escaped unscathed. As for disasters falling between these points, the definition is vague. The stipulation of a precise cut-off does not appear needful at this stage. [emphasis added]

Secondly, some existential catastrophes wouldn’t be global catastrophes (given Bostrom & Ćirković’s definition), because they wouldn’t involve any sudden spike in deaths or economic damage. This applies most clearly to “desired dystopias”, in which a large portion of the people at the time actually favour the outcomes that occur (e.g., due to sharing a deeply flawed ideology). A desired dystopia may therefore not be recognised as a catastrophe by anyone who experiences it.[5] Ord’s (2020) “plausible examples” of a desired dystopia include:

worlds that forever fail to recognise some key form of harm or injustice (and thus perpetuate it blindly), worlds that lock in a single fundamentalist religion, and worlds where we deliberately replace ourselves with something that we didn’t realise was much less valuable (such as machines incapable of feeling).

It’s also possible that some transitions to undesired or enforced dystopias (e.g., totalitarian regimes) could occur with no (or little) bloodshed or economic damage.[6]

In contrast, unrecoverable collapse seems likely to involve a large number of deaths. It also seems to almost “by definition” involve major economic damage. And extinction would of course involve a huge amount of death and economic damage. 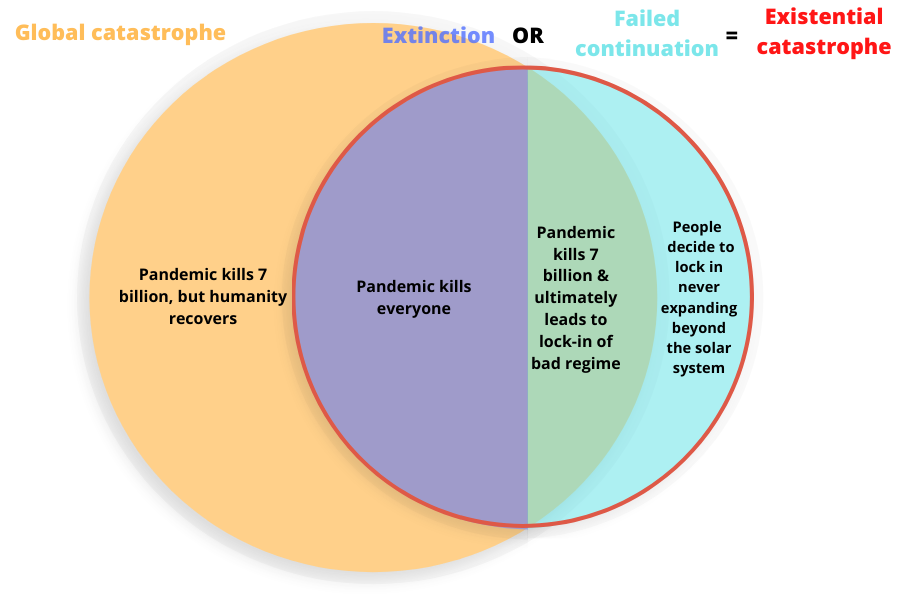 Suffering risks (also known as risks of astronomical suffering, or s-risks) are typically defined as “risks where an adverse outcome would bring about suffering on an astronomical scale, vastly exceeding all suffering that has existed on Earth so far” (Daniel, 2017).[7] (Update in 2022: That source has been updated to give the following definition instead: "S-risks are risks of events that bring about suffering in cosmically significant amounts. By “significant”, we mean significant relative to expected future suffering." This definition does seem better to me, for the reasons that Lukas Gloor mentions in a comment.)

I’ll use the term suffering catastrophe to describe the realisation of an s-risk; i.e., an event or process involving suffering on an astronomical scale.[8]

We could thus represent the relationship between the concepts of suffering catastrophe, existential catastrophe, and global catastrophe via the following Venn diagram (although this diagram might be inaccurate, given a sufficiently suffering-focused theory of ethics): 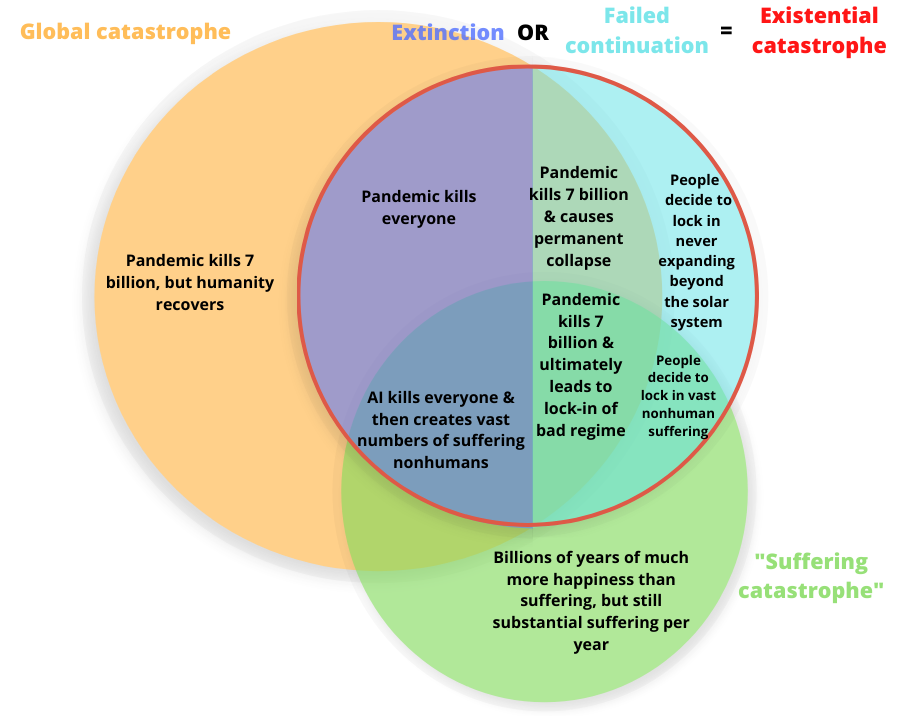 If you found this post interesting, you may also find interesting my previous posts Clarifying existential risks and existential catastrophes and 3 suggestions about jargon in EA.

I’m grateful to Tobias Baumann, Anthony D, and David Kristoffersson for helpful feedback. I’m also grateful to David for discussions that may have informed the ideas I expressed in this post. This does not imply these people's endorsement of all of this post’s claims.

I wrote this post in my personal time, and it doesn’t necessarily represent the views of any of my employers.

Why is "people decide to lock in vast nonhuman suffering" an example of failed continuation in the last diagram?

Failed continuation is where humanity doesn't go extinct, but (in Ord's phrase) "the destruction of humanity’s longterm potential" still occurs in some other way (and thus there's still an existential catastrophe).

And "destruction of humanity's longterm potential" in turn essentially means "preventing the possibility of humanity ever bringing into existence something close to the best possible future". (Thus, existential risks are not just about humanity.)

It's conceivable that vast nonhuman suffering could be a feature of even the best possible future, partly because both "vast" and "suffering" are vague terms. But I mean something like astronomical amounts of suffering among moral patients. (I hadn't really noticed that the phrase I used in the diagram didn't actually make that clear.) And it seems to me quite likely that a future containing that is not close to the best possible future.

Thus, it seems to me likely that locking in such a feature of the future is tantamount to preventing us ever achieving something close to the best future possible.

Does that address your question? (Which is a fair question, in part because it turns out my language wasn't especially precise.)

ETA: I'm also imagining that this scenario does not involve (premature) human extinction, which is another thing I hadn't made explicit.

Edit: I just noticed that this post I'm commenting on is 2 years old (it came up in my feed and I thought it was new). So, the post wasn't outdated at the time!

Suffering risks (also known as risks of astronomical suffering, or s-risks) are typically defined as “risks where an adverse outcome would bring about suffering on an astronomical scale, vastly exceeding all suffering that has existed on Earth so far” (Daniel, 2017).[7]

That definition is outdated (at least with respect to how CLR thinks about it). The newer definition is the first sentence in the source you link to (it's a commentary by CLR on the 2017 talk):

S-risks are risks of events that bring about suffering in cosmically significant amounts. By “significant”, we mean significant relative to expected future suffering.

Reasons for the change: (1) Calling the future scenario “galaxy-wide utopia where people still suffer headaches every now and then” an “s-risk” may come with the connotation (always unintended) that this entire future scenario ought to be prevented. Over the years, my former colleagues at CLR and I received a lot of feedback (e.g., here and here) that this was off-putting about the older definition.

(2) Calling something an “s-risk” when it doesn’t constitute a plausible practical priority even for strongly suffering-focused longtermists may generate the impression that s-risks are generally unimportant. The new definition means they're unlikely to be a rounding error for most longtermist views as they are defined* (except maybe if your normative views imply a 1:1 exchange rate between utopia and dystopia).

(*S-risks may still turn out to be negligible in practice for longtermist views that aren't strongly focused on reducing suffering if particularly bad futures are really unlikely  empirically or if we can't find promising interventions. [Edit: FWIW, I think there are tractable interventions and s-risks don't seem crazy unlikely to me.])

Thanks for flagging this! I've now updated my post to include this new definition (I still use the old one first, but have added an explicit update in the main text).

This definition does seem better to me, for the reasons you mention.

One further ambiguity that IMO would be worth resolving if you ever come to edit this is between 'unrecoverable collapse' and 'collapse that in practice we don't recover from'. The former sounds much more specific (eg a Mad Maxy scenario where we render so much surface area permanently uninhabitable by humans, such that we'd never again be able to develop a global economy) and so much lower probability.

I'm honestly wondering if we should deliberately reject all the existing terminology and try to start again, since a) as you say, many organisations use these terms inconsistently with each other, and b) the terms aren't etymologically intuitive. That is, 'existential catastrophes' needn't either threaten existence or seem catastrophic, and 'global' catastrophes needn't affect the whole globe, or only the one globe.

Also it would be useful to have a term that covered the union of any two of the three circles, esp 'global catastrophe' + 'existential catastrophe', but you might need multiple terms to account for the amibigity/uncertainty.