What is valuable about effective altruism? Implications for community building

If we’re interested in building the best version of effective altruism, it’s natural to spend some time thinking about why people should join. 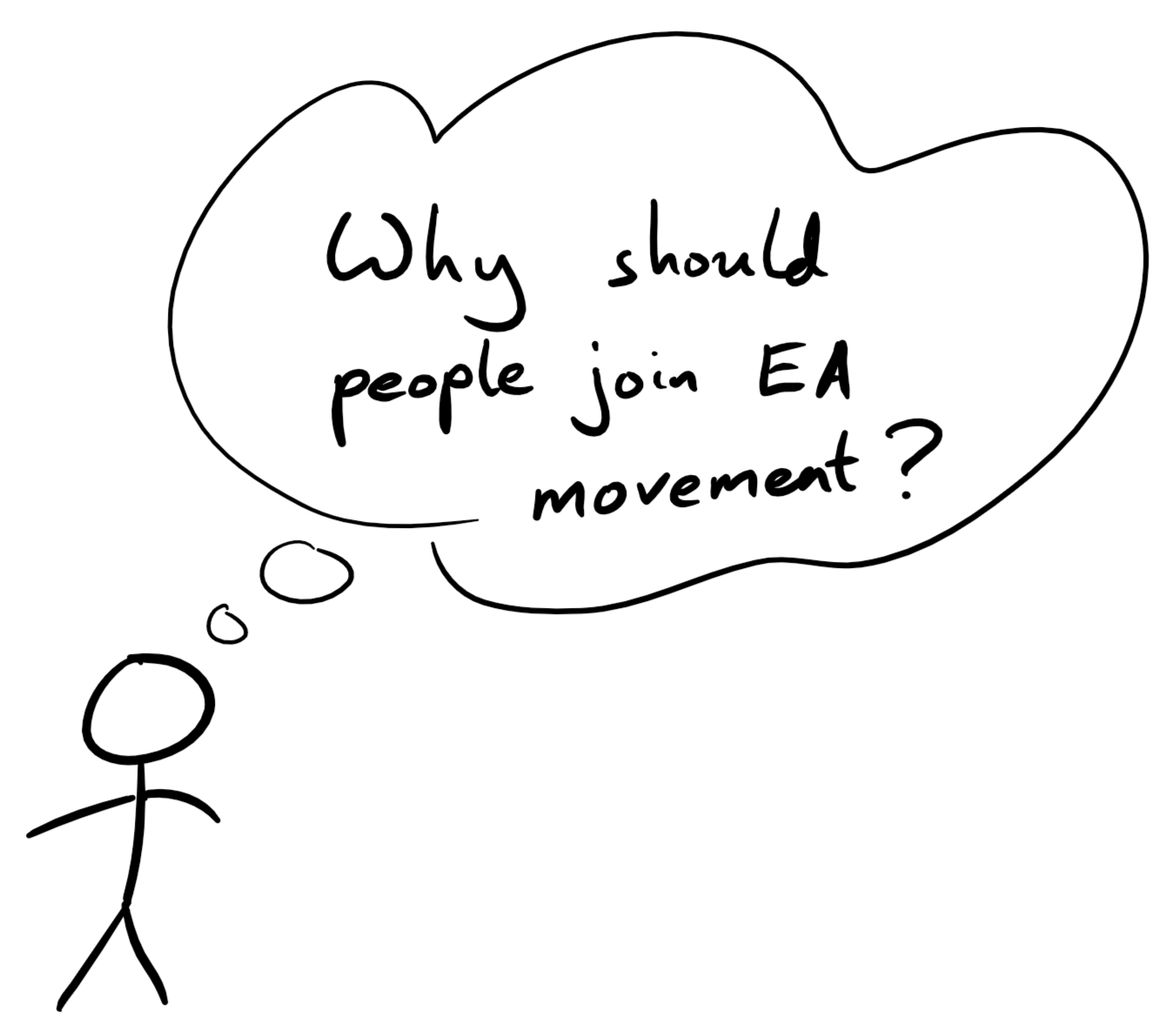 Presumably people should join because it’s valuable, but how is it valuable? In fact there are a couple of different versions of the question, according to whose perspective of “valuable” we are using. They both seem relevant, and they have different answers: 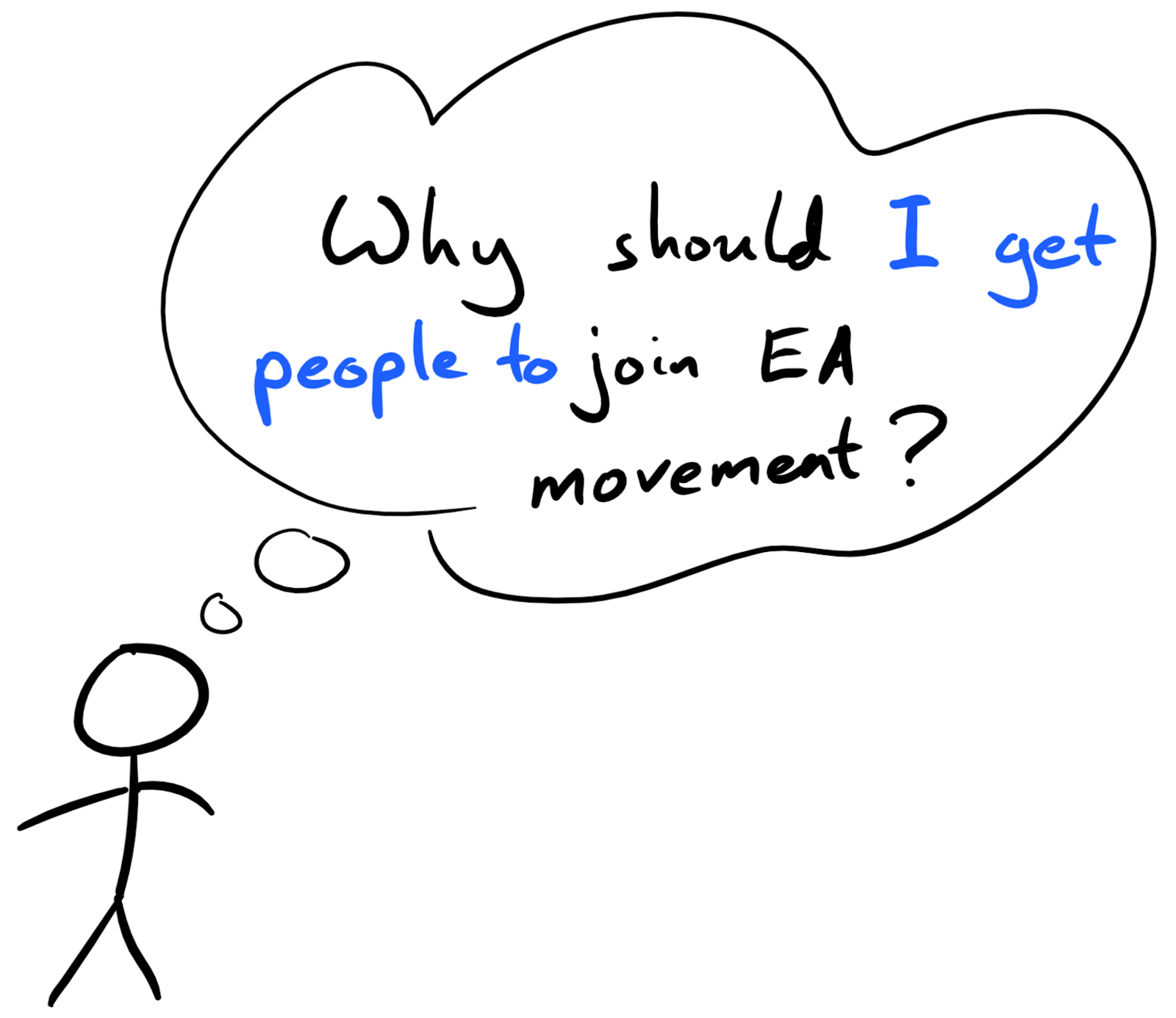 First is the impersonal perspective: in what ways does effective altruism (as a community, or an intellectual project) help the world? This is important to understand because it can help us to focus on steering towards versions which are more valuable. [One might also have other personal reasons for wanting to get people to join the movement, but in practice I think these are usually significantly weaker.] 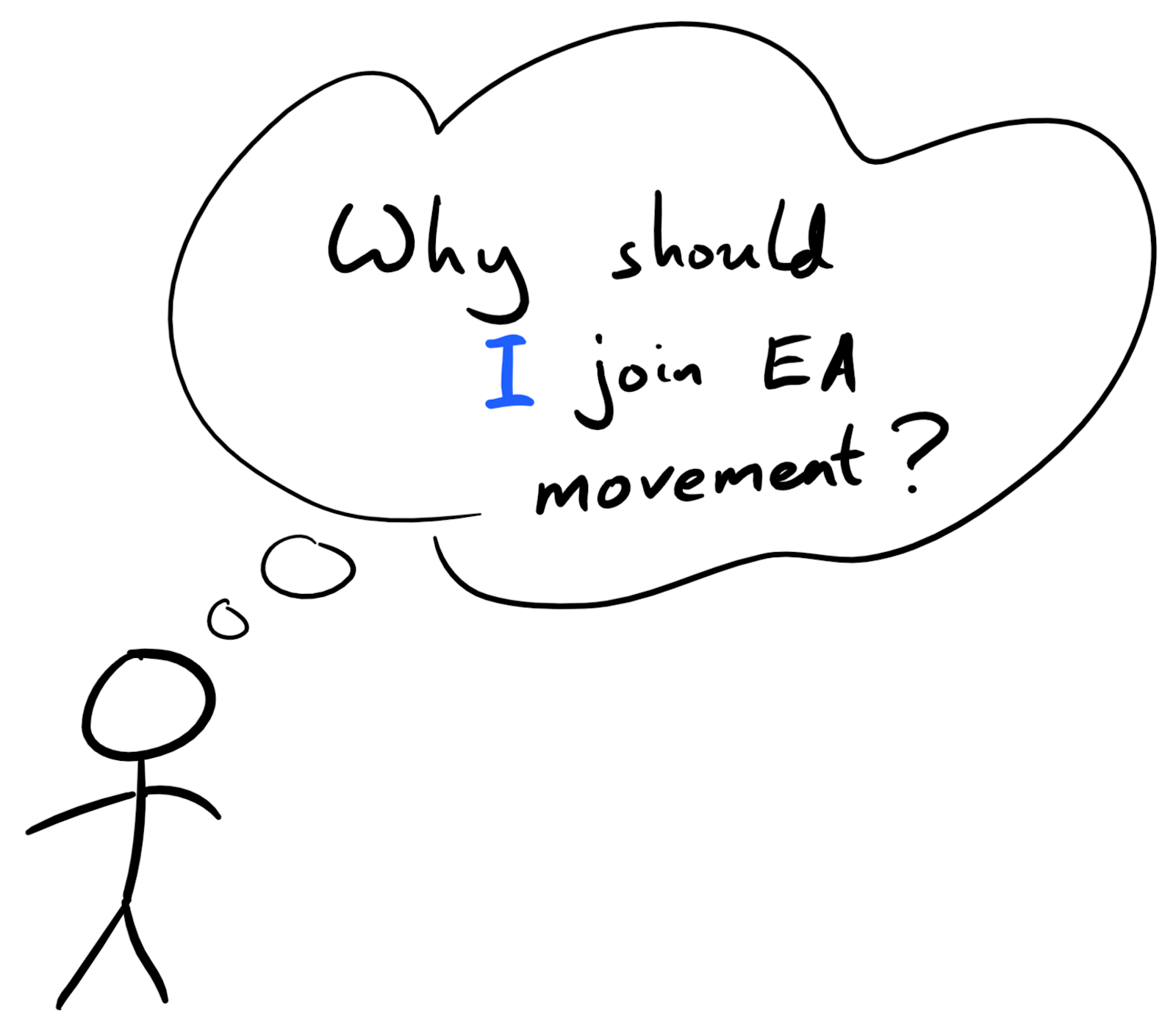 Second is the personal perspective: for individuals who might engage with effective altruism, why is it valuable for them personally to do so? Impersonal reasons can be a part of this, but may not be the whole story. We might think of this as asking: what is the value proposition for effective altruism? This is important to understand because it can help us to build a version which appeals more strongly to the people we would like to attract.

Effective altruism helps the world by causing individuals to do more good in their lives. Roughly, the degree to which it helps depends on:

The degree to which individuals take valuable action in turn depends on:

Effective altruism also offers significant personal benefits for people who engage with it. In practice these can be a large part of what appeals to and motivates individuals. (This section is just observational, rather than an attempt at comprehensive analysis, and it might miss something important.)

This suggests an empirical question:

How important are these different value propositions in attracting people? How does it vary by person?

There has been some work on this already, for example asking people what they found valuable about local communities in a 2015 survey of effective altruists . It would be great to see much more explicit investigation.

It also suggests a strategic question:

To what extent should we try to separate the value propositions?

Tightly linking the value propositions might produce a more attractive total package (to individuals), and help people to move from one source of value to another. But separation could be helpful if some people were put off by some aspects. For example, although meaning can be a strong draw for some people, it can play into perceptions that effective altruism is weird or demanding. Separation could also help to insulate against catastrophic failure: for example if there were a scandal in the community, the reputation of the knowledge and tools that have been developed would likely be less damaged if they were more separate.

Synergies and tensions between impersonal and personal perspectives

From the impersonal perspective, there were three axes (values, knowledge, action) that it could be good to move individuals on. Is being moved also valuable for the individuals?

I think it depends. For each axis there are ways of encouraging people to move which are likely to feel valuable for the individual, and ways which may feel hostile or inconsiderate.

Increasing knowledge about what is effective is helpful from the impersonal perspective, but it’s also one of the value propositions for individuals. This is great: sharing knowledge becomes a win-win, since it’s desired by both sides. It also gives us perspective on why decision-relevant research is particularly important: it creates knowledge which will often be acted on, and through being shared can attract people towards effective altruism.

(This is true of offering knowledge in an even-handed way. Trying to get someone to believe a particular proposition can get into the realm of propaganda, which is generally not considerate.)

In contrast to offering people knowledge, which generally feels cooperative, trying to improve someone’s values (by your standards) or pressuring them to take greater action can more easily be a non-cooperative interaction. I actually think that discussions about ethical issues or what we should do are very valuable if undertaken with a spirit of open-mindedness and humility, but they can take on an adversarial character if people rather take the approach of trying to persuade others of what they find to be certain truths.This creates a tension between what is impersonally valuable (them making large such shifts) and what is valuable to them personally (perhaps not doing so).

In the case of demanding action, this tension has been recognised and discussed at least somewhat within the community (without consensus). I think the case of trying to shift values is analogous; more of the related discussion seems to be against pushing people , but this may be in response to observing potentially damaging behaviour .

In both cases my personal view is that we should err on the side of not pushing people. There are substantial benefits to being considerate in our interactions with people who might join the community. A particular worry is that pushing people can create hostility towards effective altruism (anecdotally, it has in some cases; it would be great to see a thorough investigation of this). I’ve argued it’s important for the long-term growth of the movement that we take pains to avoid hostility . And I’m particularly concerned that extremely reasonable people (whom we would like to attract) are particularly attracted to communities they see as offering support rather than pressure.

There are costs to being careful about this. A desire to avoid pushing people’s values might mean being slightly more hesitant to recommend working to reduce existential risk without discussing values first, since the importance of the cause area depends on ethical views.

However, I don’t think we need to push values or actions where not wanted, because there are ways to help people move on these axes which build out of the personal value propositions:

While there could still be tension when there is an effective way to shift people which is not considerate to their preferences, not doing so is likely to mean shifting them less efficiently rather than not at all, which is a smaller price and easier for the benefits of considerateness to overcome.

Thanks to Goodwin Gibbins, Sam Hilton, Stefan Schubert and others for conversations and comments which fed into this article.

This is a great question and I think deserves further thought.

Helping people consider their values was one of the major goals Daniel Kokotajlo and I had in designing this flowchart. One possible activity would be to read through and/or discuss parts of that.

There's a website (who's link I'm trying to find) of EA related tasks ranging from 2 minutes to a few hours that could be used in a discussion/hackathon meetup. And also effectivealtduism.orgs new 'Ways to get involved' guide. THINK also has worksheets that cover various issues to use personally or in groups. Is this the type of material you were looking for?