Several people have written up their expenditures and savings results. Here is my summary.

I accomplished both my goal and my stretch goal by a significant margin, spending $12,179 this year.

I separate out expenses which I consider “penny foolish, pound wise” (PFPW), meaning investments which cost money but which end up generating more revenue than they cost.

I’ve talked about this before; for example, I spend about $30 per month on Internet and that investment pays itself back in approximately a day. It would be “penny wise, pound foolish” to stop paying for Internet just to meet some spending threshold, and therefore I put this in the PFPW bucket.

Including these costs raises my total expenditure by about $3,000 per year, which puts me slightly above my stretch goal but still below the goal of $22,620. 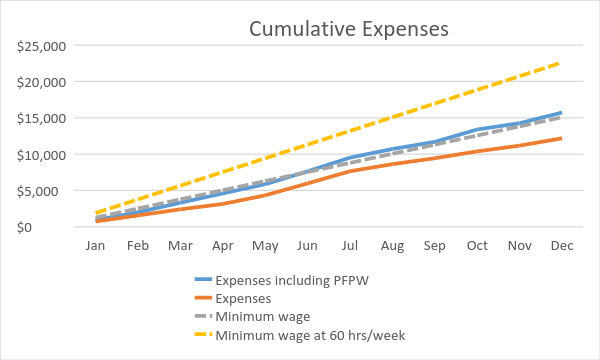 My biggest single expenditures are housing and food. The third-biggest was traveling to EA Global – almost 10% (!) of my entire year of expenditures came from the single three-day trip to San Francisco for the event.

One note about taxes: my company is an LLC, which is a pass-through entity. This means that what the IRS considers to be my income bears little relationship to what a normal person would consider to be my "income". As a result, I don't track taxes.

GWWC Pledge and its Effect on My Finances

There’s been some discussion recently on the Giving What We Can pledge, and some arguments against taking it. Here’s Michael Dickens:

You might start a startup or a non-profit, or take a job at a non-profit where you won’t be making much.… People might be reluctant to take a job doing direct work if that would compromise their ability to fulfill their pledge. Since there are a lot of opportunities to do good in direct work that may be more valuable than donating 10%, we wouldn’t want to discourage the former in pursuit of the latter.

If you either (1) make less than $100k/year, or (2) might be willing to make less than that at some future time in order to work directly on something the world needs you to do (besides giving), I would not be surprised to find myself recommending against you pledging to always donate 10% of your income every year.

I have been in both of these situations (started a company and earned zero dollars per year as a result), so I thought it might be worth talking about how the pledge affected me.

(As one point of clarification: I believe it’s very hard to formalize something like “be ethical”, and therefore the GWWC pledge is a necessarily imperfect document. I consider my goal of donating what I make of above minimum wage to be the “real” goal, and the specific language of the GWWC pledge is important but not maximally binding. I think this is the spirit in which the pledge was intended, but for argument’s sake the below is written as though I had considered the text to be binding verbatim.)

Having taken the pledge affected me… exactly not at all.

Before quitting my old job I spent some amount of time saving up money to start the company with. If I donated 10% of my income then this would mean that I have to work ~11% longer to get to that same target savings. I believe I spent a few months saving up, so perhaps the pledge would make me delay starting a company for a few weeks? I had actually already hit the 10% threshold for the year due to earlier donations, so in this case it would have made literally made no difference. But even if I hadn’t already donated enough I doubt it would’ve made a substantive difference.

This criticism seems more valid if you are talking about pledging at very high levels (like I have done). In this case, having a definition of “penny foolish, pound wise” expenditures (or something analogous) seems extremely important.

My guess is that most people who take the pledge would not benefit from tracking their expenses this closely, and so it doesn’t seem worth adding an addendum to the agreement in general. But, if you have been considering taking the pledge and decided not to because of these concerns, I would suggest PFPW as a solution.

Another, more legalistic, suggestion for those who are concerned about the bindingness of the pledge: rewrite the pledge to state that you will make “best efforts” (or “reasonable efforts”) to donate 10%.

Plan for next year

I don’t plan on making any major changes to my spending strategy since increasing my income seems more useful than decreasing my expenses.

My girlfriend Gina has suggested that I change the definition of PFPW. For example: I don’t use all of my car for work purposes, so possibly I shouldn’t deduct 100% of those costs, and conversely I don’t deduct any of my food or housing costs even though I need those to live. I can’t see this resulting in more than a couple thousand dollars difference, so it does not seem to be worthwhile to figure out what this entails.

I’m happy to answer any questions people have about my expenditures or plans. Also, my company is always hiring!

Thanks for writing this up!

This seems like a big one. Your biggest expenditures are necessities: food and housing. You might be ok with cheaper housing and food, but certainly bringing your expenses to $0 in these categories would be extremely PWPF. On the other hand, people's normal understanding of "living on minimum wage" includes things like "paying for housing and food". So deducting the cost of minimally acceptable housing and food as PFPW wouldn't make much sense.

Do you mean that you don't count the money you pay in taxes as part of your spending, or something else? The former makes sense to me: someone living on minimum wage would probably pay negative tax on net, via EITC.

Thanks for the feedback!

My choice of minimum wage was originally motivated by Peter Singer's "if it is in our power to prevent something very bad from happening, without thereby sacrificing anything else morally significant, we ought, morally, to do it." Going below minimum wage seemed like as good a threshold as any for "morally significant" sacrifice.

Anyway, that long-winded introduction is just to say that, when I deviate from some general understanding of "living on minimum wage", it's not clear to me whether that's a bad thing.

On the other hand, people's normal understanding of "living on minimum wage" includes things like "paying for housing and food".

Yeah, that's a fair point. Although at least in Wisconsin I think an individual on minimum-wage would qualify for food stamps, and possibly a rent subsidy as well?

Yeah, that's what I meant.

an individual on minimum-wage would qualify for food stamps, and possibly a rent subsidy as well?

My (MA) understanding is that food stamps are relatively easy to get, and most people with low enough income can get them, but housing subsidy is very hard to get, with a queue of several years.

Which is another thing that makes this tricky: there are a lot of benefits that people are technically entitled to but often don't get in practice, and often take up a lot of time to get. So if you look at the CBO's "Effective Marginal Tax Rates for Low- and Moderate-Income Workers in 2016" pdf (figure 1) you can see that there are significant benefits at the low end, but lots of people don't get them.

Ben, I'm impressed - thank you for sharing and wish you continued success with the business despite the changing political environment.

If I donated 10% of my income then this would mean that I have to work ~11% longer to get to that same target savings.

That doesn't seem right unless you have zero expenses. You'd need to multiply 11% with (monthly income / monthly savings).