Lessons from a full-time community builder. Part 1 of 4. Impact assessment

Lessons from a full-time community builder. Part 1 of 4. Impact assessment
Summary
Raising awareness of EA -> engagement in our community -> positive behaviour changes
Contents
Background and initial plans
THE VISION
MODEL / THEORY OF CHANGE
AIMS AND PLANS
PREDICTIONS
Breakdown of activities and costsACTIVITIES
COSTS
Impact – key data
HEADLINE FIGURESThe total impact of Effective Altruism London this year is estimated to be:
IMPACT OF PROVIDING FUNDING
HOW THIS COMPARES TO OTHER EA ORGS
Our measured impact on behaviour changes suggests we are in the same order of magnitude as other meta EA organisations but somewhat less effective.
The returns to funding other EA orgs is in the ballpark of $1000 per pledge or equivalent (am uncertain estimate based on talking to people who work in EA organisations). We are getting a pledge level change in behaviour for about $2000 of funding (depends on how measured, see Cost benefit analysis section in Appendix A below).
Impact – further analysis
GROWTHGrowth rates are unclear but generally positive. Noise is added as the kinds of events being run has changed throughout the year as we have experimented with different things.
Impact – Other benefits and stories of success
Update on June – Sept
Conclusions
Annex A: Impact – elaboration & data collection
Annex B: Subgroups
You can read this here.
5 comments

NOTE: For the past year Sam Hilton has been funded by the EA community in London to grow, run and support the community. This is part 1 of a 4 part write up, broken down as follows:

Part 2.  General lessons on how to build EA communities.

Part 4. Future plans and a request for funding

[Links will be provided to future articles when they are written]

Background: Sam was funded to work full time on the EA London community for a year.

What was the estimated impact:

- Breakdown of activities and costs

- Impact – Other benefits and stories of success

- Annex B: London’s other EA communities

This document can be read as a Google Doc here.
This is part 1 of 4. Other parts cover community building, lessons learned and future plans. [Links pending]

This impact assessment covers the activities done by Effective Altruism London from 3 June 2016 until 7 June 2017.

In April 2013, the first Effective Altruism London social event was held. The community grew slowly but steadily, drawing from outreach efforts in London and growth in the wider EA community. In June 2016 the community began funding Sam Hilton to act as a full time movement builder for a year.

Our aspirational vision was written collectively by the community and has helped guide actions. It is:

Everyone in London working effectively towards a better world

We had a 3 stage model of how we create impact. Awareness of the community leads to people engaging which leads to people changing their behaviour to be more altruistic and effective:

This model has remained largely unchanged for the year, although we also tried to recognise (but do not have good measures for) alternative paths to impact. Including:

• Community benefits, such as networks and EA friendships leading to projects and actions taken.

• Benefits of keeping existing EAs within the EA community

The aims set for this year were:

Plans were made about how these aims would be achieved.  For example, we planned to:

Details of the initial plans can be found at: February 2016 _ Request for funding

Prior to the year beginning we predicted the following counterfactual impacts

Breakdown of activities and costs
ACTIVITIES

The following chart shows the breakdown of key activities carried out in the past year.

This is roughly as expected from the initial plans, although perhaps with:

The following chart shows the breakdown of financial costs for the past year.

Note: We have not accounted for time spent by volunteers. This is difficult to do as it is unclear:

The total impact of Effective Altruism London this year is estimated to be:

The above figures are calculated estimates rather than numbers known with certainty. We explain how they were calculated below in Annex A: Impact – elaboration & data collection.

We estimate that if not funded we would have had 33% of the impact on behaviour and attendance, 25% of the impact on contactable individuals, and the finance subgroup would have been started. This is based on the amount of and size of events run in by volunteers in previous years.

This means that the impact on behaviour of funding EA London, rather than letting it be run by volunteers, is about 2/3 of the impact set out above, ie. 12 large behaviour changes of which 8 are GWWC pledges.

Additionally not being volunteer run means a reduced risk of community collapse, and the additional benefits created, as set out in the section: Impact – Other benefits and stories of success.

HOW THIS COMPARES TO OTHER EA ORGS

Our measured impact on behaviour changes suggests we are in the same order of magnitude as other meta EA organisations but somewhat less effective.

The returns to funding other EA orgs is in the ballpark of $1000 per pledge or equivalent (am uncertain estimate based on talking to people who work in EA organisations). We are getting a pledge level change in behaviour for about $2000 of funding (depends on how measured, see Cost benefit analysis section in Appendix A below).

Growth rates are unclear but generally positive. Noise is added as the kinds of events being run has changed throughout the year as we have experimented with different things. 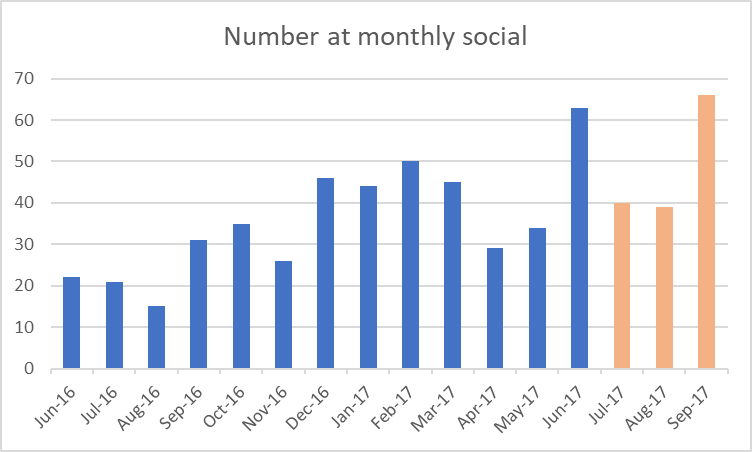 On the other hand, we did not find additional evidence that we are changing behaviour or getting more new people engaged at an increasing rate. This maybe a sign that we are not successfully engaging more new attendees despite larger events, but might also be because the data set is noisy, too small and has missing data.

HOW OUR ACTIONS CREATED IMPACT

Roughly 80% of project time went into marketing and running events, which led to the behaviour changes we saw (18 large and 174 significant behaviour changes). It is difficult to know exactly which actions lead to which changes as people often do not change their behaviour straight away.

We can see from the event reports that social events led to the most new attendees (people for whom this was their very first event) returning (attending another event with 50 days):

NOTES: • Not adjusted to account for imperfect attendance data, total numbers returning is likely to be higher.
• Dates covered in the above table: 01 Aug 16 to 31 Jul 17.   • Returning means attended another event within 50 days.

More detail on exactly which events, campaigns and actions were more impactful than others is covered in part 3 of the write-up on Specific lessons on running a large local community [link pending].

Roughly 20% of the time went into supporting the sub groups, supporting individuals with their projects, and so forth. We believe this had other benefits, such as the existence of student EA groups at London universities. (Events at student groups and any resultant behaviour changes are not captured by our metrics, eg. we know of and have not counted 3 pledges at student groups).

WHY COUNTERFACTUAL IMPACT OF FUNDING WAS LOWER THAN PREDICTIONS

How our predictions match our results:

* Predictions made comparing to if volunteer run. Results are are the marginal impact, so 33% lower than headline figures..

We overpredicted the expected behaviour change. We have a good understanding of why this happened. The main problem was that we based predictions on self-reported behaviour change, but this did not match up to actual behaviour changes. For example, people said on surveys that attending EA London events has already had a drastic (8 out of 8) effect on their behaviour but upon questioning failed to give clear evidence of such changes.

Also, our behaviour change metric does not capture future behaviour changes. For example, changing a career plan (or donation plan, etc) would not be captured by our metric, unless we believe the person could give evidence that they had already changed their career (or donations etc). Anecdotal evidence does however suggest that people who are attending regular events and report an intention to change their behaviour may well actually do so.

Impact – Other benefits and stories of success

As well as introducing new people to EA we have had significant other successes, as illustrated by the anecdotes below:

Founding and supporting sub-communities. Some examples:

Retention effects. Attendees have commented that the EA London community helps make sure they continue to engage with EA ideas. However, this effect is hard to measure and we have no good evidence or stories of this. We have seen a few people attending events who had been involved in EA at university, not done much since and EA London gets them re-engaging with EA ideas.

Paved the way for future behaviour change. We have seen people who got involved in EA in part through EA London, prior to this year, play a bigger role in the EA community including:

These are not benefits created this year but are evidence that impressive actions and significant life changes may take longer than a year to manifest. Already we have seen:

Paved the way for future growth of the London community. We should grow more quickly in the future as we have gained:

Downsides. It is likely some of the people who have put time and effort to advising and supporting EA London may have had significant benefit elsewhere.

In the last 3 months we have continued to put time into EA London and to grow (captured by the orange bars in the charts in the section on growth). We have also been training new staff. Sam took a step back (and will shortly be moving into a Government role) and Holly Morgan and David Nash took over the EA London work. In these 4 months we have seen:

Overall the conclusions from this year are rather weak. As set out above we believe:

SHOULD EAS CONTINUE TO FUND THE LONDON COMMUNITY

As a result of our limited success this year we intend to change our plans. We hope that with slightly different plans and more focus we can have an even greater impact in future.

Overall, we think it depends on what the other opportunities for funding meta EA work such as movement building work are. We believe such opportunities are limited and that CEA are not considerably funding-constrained. We have, collectively as a community, taken the decision to develop future plans and seek funding for another year.

We believe the larger EA organisations providing small amounts of funding and support to local communities is useful. That said, this year has not made a strong case either for or against funding full time local community organisers. Overall, we have no strong recommendation either way and it may depend on what other opportunities are available.

We do however think there is value in funding outreach to innovative community groups with specific targets, such as HIPE which is reaching UK civil servants, REG which reached top poker players or Founders Pledge which is reaching founders. This is defended by our ideas of how communities grow (see part 2 of write up on: General lessons on how to build EA communities) and analysis of our subgroups (see section below: Annex B: Subgroups). We will look to do more of this in London next year.

If people in the EA movement do fund local city organisers they should be prepared for the fact that compared to other movement building actions that involve mass marketing, growing a local community will produce less rigorous quantitative data but will provide a greater insight into the individuals impacted.

A few things we think that CEA and/or LEAN should be considering in their work to build the EA movement:

You can read this here.

You can read this here.