Democracy and Development, a Simple Model

One of the most important questions in aid is the ethics of improving governance in non-democracies. In part, this hinges on a highly political question: does economic growth cause democratization? Here I will briefly summarize the data on this question as of 2002, and write out a simple model to explain it.

This is where things get strange. The effect of production on democratization has varied massively through history. Take a look at this plot 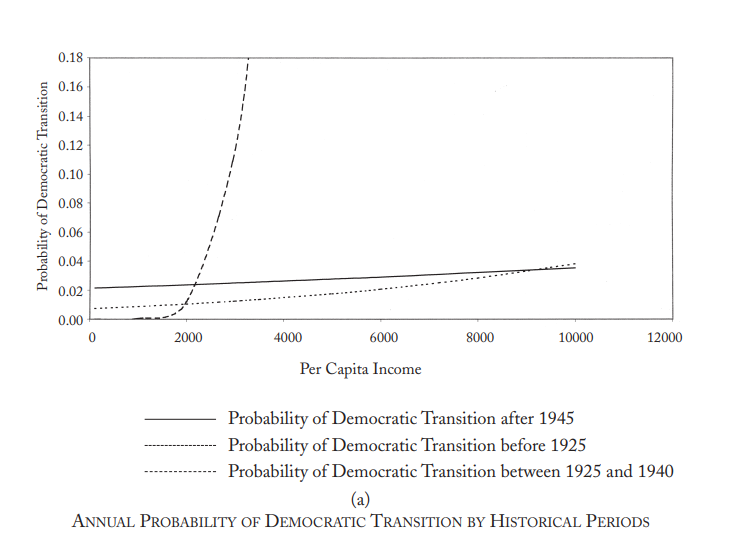 So wealth had a moderate effect on democratization in the 19th century. Then during the 1900s-1940s wealth had a huge effect. Growing countries were almost guaranteed to democratize, with the exception of Italy and Russia. Since WW2 we've returned to a small wealth effect, just a factor of two or 2 percentage points. Boix and Stokes put the question

why did the income threshold for democratization rise in the period after 1950? In other words, why in effect could a country “buy” democracy more cheaply—for a lower level of per capita income—in late-nineteenth-century England or Norway than in late-twentieth-century Chile or Benin"

Sweden democratized in 1920 with a percapita income of 3,000 USD. China is above triple that and rising, and 7 times as much in purchasing power parity. Why is democracy occurring at higher income levels?

A simple declining marginal utility of income would predict that growth would increase democracy, as dictators realize that under democracy they are guaranteed a comfortable income even if they lose reelection. But such a model would not explain why the threshold has shifted so far through history.

Also, much of the growth-democracy relationship occurs through other macro-social variables correlated with income. As we add education, rural equality, urbanization and industrialization measures the effect of income drops out, and we cannot distinguish the effect of income from these correlates. So income could be driving the transition, but these other components seem plausible.

What is going on?

I've given the reader lots of complicated facts. How can we understand what is going on here?

My answer starts with rejecting the premise that distribution is at the heart of politics. Under a redistributive model, most of the change in price should come from R, the probability of dictator winning a revolution, or some democratic variables about how the dictator will fare under democracy. The democratic variables have moved toward democratization because dictators are increasingly winning post-democracy elections (!). R has undergone massive swings over the period, between the Soviet Union, the Chinese sphere, the digital revolutions and counterrevolutions. It's a stretch to argue that all of the increase in price of democracy is due to changing repressive capacity, but I cannot prove that.

What if the answer lies in problem theory, not conflict theory? Almost all political scientists and many political economist are conflict theorists in that they emphasizes the distributional consequences of policies (which are large and important). A problem theorist would emphasize the problem of figuring out what to do and how to do it, with distribution less important. Conflict theory describes politics best when the outcomes of policies are obvious and the preferences of the selectorate is obvious. Social security policy is the ideal area for conflict theory. Problem theory best describes politics when outcomes are hard to guess and the selectorate preference identification problem is difficult.

I will sketch a problem theory view of governing. All leaders, dem and non-dem, must overcome a series of very hard problems.

If the leader is good at this, they produce some average utility of incumbency for their supporters. Call this U(I). You can stay in power as long as

where w is the cost of fighting, 1−r is the chance you will lose power, and u(D) is the utility of replacing you with a democracy (neglect autocratic challengers for simplicity).

How much has u(C) changed for developing countries since 1950? The answer depends on how much better the next democracy is at tasks 1, 2 and 3 above. I would argue democracies how only improved slightly at those tasks. You may be surprised to learn that modern constitutions are not written based on cutting edge evidence based policy (this is partly political sciences fault, sorry). Even today constitutions tend to imitate the nearest colonial power, with minor alterations to avoid dysfunction if the people are lucky. They are particularly designed to avoid coups and civil wars through "constraints", but those constraints are often wide vetoes which interfere with the big three tasks. So the governing ability of the Swedish parliament is about the same as the ability of Malaysia today. Some democracies are at the frontier of governing ability (the UK, Japan, New Zealand), and the mediocre have stayed mediocre.

But u(I), the governing ability of autocracies, has changed massively since 1945. Consider the policymaking ability of the Italian monarchy in 1912 or the Chinese Communist Party in 1950. It was really, really bad. The Italian Monarchy had no mechanisms to prevent public servants from punishing complainers. The Chinese launched the Great Leap Forward. In the 50s Spanish dictator Francisco Franco drove through a poor neighborhood by chance and learned that poverty existed, leading to flurry of executive orders which he quickly forgot about. Jordan's first act as independent country was the construction of a massive cement factory, despite every other country also building cement factories. Go back further and inbreeding and assassination were crippling problems for autocrats. A few leaders compensated with personal talents, like Mussolini in area three. But most autocracies were just bad at governing.

Autocracies also have steep practical challenges that democracies lack. Lazy and corrupt public servants in autocracies can simply punish anyone who complains, and as a result autocrats struggle to provide provide public goods. Negotiation between factions in autocracies is inefficient because there are no formal rules and violence is possible. Voting either does not occur or is prevented from aggregating information. If public servants detect corruption and want to stop it, they refrain from speaking out to protect the parties brand. There is no "loyal opposition" with an incentive to hound skiving bureaucrats. So autocrats started with both fewer tools and greater problems than democracies in pro

From 1950 to today, Russia, China and Peru have gradually solved these governing problems. Key innovations include the single-party state, results-oriented promotion regimes and layered oversight. Perhaps the greatest innovations is the authoritarian parliament. The autocrat forms a parliament but systematically prevent party formation or discussion of issues against the regime interest. These provide two benefits: under vote-buying, they become a contest-style auction in which candidates compete to gather supporters for the regime in exchange for corruption opportunities. Without vote-buying, the parliament provides the same preference aggregation and issue discovery functions as in democracy. Of course, there are autocracies who fail these tasks and do not grow, as Ethiopia is painfully illustrating. But the effect is real for the autocracies who do grow.

So why do countries remain autocracies to a higher level of income today? One possibility is that repressive capacity has grown faster than revolutionary capacity. But much of the variance must be explained by the increased state capacity of autocrats. More simply, Putin's regime is better at ruling than the average autocrat in the 50's.

One final caveat: Autocratic politics lacks a final arbiter of disputes and therefore rules bind less and last shorter times. An autocrat can build an efficient state, but there is little to prevent her inheritor tearing it down.

Thanks for writing this, I found it very interesting.

You make it sound like democracies are all relatively quite similar - e.g. basically copies of either the UK or the US political systems, with few refinements. In contrast, the autocracies vary quite broadly, and the autocrats have potentially more room to change their institutional setup. So maybe our binary/linear categorisation is misleading - really there is a narrow cluster in polity-space of democracies, and the rest is all 'autocracy'. Democracy spread very easily during a narrow window of history that favoured this cluster, but our prior should be against this persisting.

Hahaha I love hearing someone else say "cluster in polity-space". I use that phrase often but the other political scientists never do. It's an incredibly useful framework for describing correlated variations and side-stepping pointless debates about definition.

The steel man for a democratic long run future: In the long run, the political system that survives longer should dominate. Once democracies pass a production threshold around 10,000 gdppc transitions become extremely rare. The half-life of a rich parliamentary system is really long > 200 years. By comparison autocracies have been unstable so far in all periods.

great information, thanks for article.