A little over a year ago, a report was released by Faunalytics (then the Humane Research Council) which highlighted the extremely high recidivism rates among vegans and vegetarians (I will refer to both of these as “vegetarians” for simplicity). A staggering 80% of people who try veg eventually start eating meat again within a few years. This means that while the current population of vegetarians in the US is around 2%, the population of former veggies is x5 higher at roughly 10%.

Shortly after this report was released, I was talking with Alan Darer who runs the large-scale Facebook advertising program at Mercy For Animals (among other things). We were discussing the high percentage of former vegetarians and whether it might be easier to recruit from this group back to an animal free diet than the population at large. After all, they had already expressed interest in a veg diet in the past. Perhaps by tailoring the message appropriately, and by providing resources that they may not have had before (including a free Veg Starter Guide with simple recipes, health information, info on meat-less meats, and social tips like suggestions for dining out, eating with friends, etc.) they could be convinced to give it another try.

Working with Nick Cooney (also at MFA), Alan and I organized a small study to investigate this. Given the extremely high recidivism rate, we reasoned that most of the people who had “liked” a vegetarian Facebook page in the past would have gone back to eating meat. So by targeting people who had "liked" pages or terms like Vegetarianism, Flexitarianism, VegNews, Vegetarian Cuisine, etc, we would effectively be targeting a large number of former vegetarians. Alan put together a series of Facebook ads targeting these people with messaging specifically meant to encourage them to “give it another try” (see example ads below). 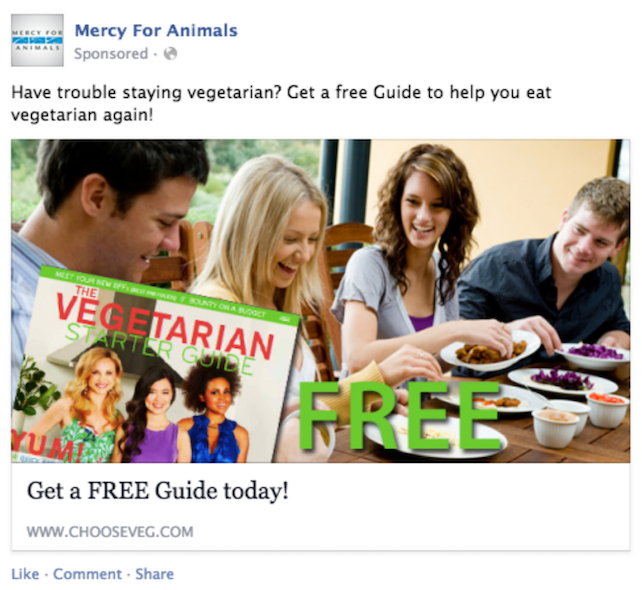 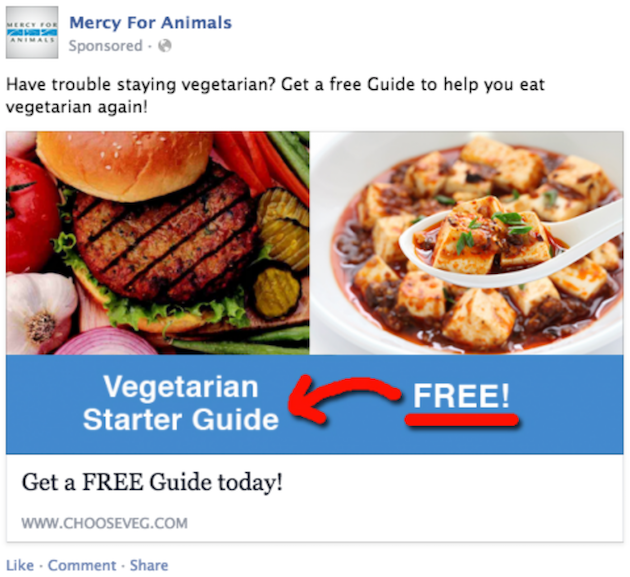 The study ran over a two month period late 2015, and the results were very promising. The average cost of getting a person in the former-vegetarian community to pledge to go veg (again) and order an MFA Vegetarian Starter Guide was about 2-3 times less ($2.65) than for the general population ($5-$8). The budget for this study was fairly small (~$2K), so while these results are tentative, they do provide motivation to continue to explore how this population can be effectively re-engaged.

Alan is interested in securing funding to run more of these campaigns in the US, and also to try them out in other countries that MFA advertises in, particularly Latin America where advertising is very cheap relative to the US. If you're interested in getting involved with this don't hesitate to reach out to him at aland@mercyforanimals.org.

Pingbacks
23Animal Equality showed that advocating for diet change works. But is it cost-effective?
22 comments, sorted by
top scoring
Highlighting new comments since Today at 2:15 AM
New Comment
[-]redmoonsoaring5y 7

I think the difference in cost per pledge could also be from a large number of existing vegetarians who just wanted the additional information. Also the former vegetarians probably consumed fewer animal foods, which would make converting one to vegetarianism less impactful.

Also, even assuming that this did successfully target recidivists (rather than just getting vegetarians to download resources on vegetarianism) we should presumably expect recidivists to be more likely to relapse or be less than 100% vegetarian, thus further reducing the impact.

Yeah, recidivists reverted once, so it seems reasonable to expect they're more likely to again. That makes the net impact of re-converting a recidivists unclear. Targeting them may be less valuable even if they're much easier to convert.

It's definitely possible that some current vegetarians might have requested the the Vegetarian Starter Guide. A follow up study could probably parse out this variable by having a simple required question for obtaining the VSG (along with their email) asking if they are currently veg, former veg and interested in trying again, or never been vegetarian at all.

Of course, we know these sorts of things are not always reliable, but I agree that's a good idea.

I think I follow you here. Facebook's ad engine is more likely to target people that have liked several of our selected groups / terms. Liking multiple groups indicates stronger identification with being veg, so these people are more likely to still be veg, as opposed to people who liked one but not the others. Is that right?

Thanks for posting! That sounds very promising. Could you maybe look into why the images are not displayed? And are the details of the study documented somewhere? Thanks!

I'll second the request for details. Especially within EA, it's pretty important to provide details (study plan, hopefully a pre-registration of the proposed analysis, the analysis itself, raw data, etc.) when mentioning study results like this.

Nick wrote up a pre-study plan that I can send your way if you (or anyone else) would like to see it. Really though, it was a pretty simple study. We targeted people who liked one or more of the following terms / pages (below) with ads encouraging them to give eating veg another shot. But definitely let me know if you have any specific questions and Alan or I can get you the details. As an aside, can you confirm for me that the images are showing up now?

Image is not showing up for me still.

Is there any reason to share those details privately instead of being transparent in public?

Thanks for letting us know about this study!

The only reason I wouldn't put that document out publicly is because it wasn't written for wide release, so maybe Nick would want to clean it up before having it shared around. I know I usually spend more time polishing the look and language of a document that I intend to be passed around publicly. But that is the only reason, we're definitely happy to share any details people are interested in.

Image is working for me now.

Hey guys, sorry I didn't realize this had posted. I was still editing the draft and just now finished cleaning it up only to find it went live last night (damn!). Here are some of the numbers (extracted from an email Alan sent me summarizing the results):

"To get one person in the US to pledge to go vegetarian and order a VSG it usually takes $5-$8 but in this trial we were able to get VSG orders for an average of only $2.65. This means that 2-3x more people ordered a VSG than if we were to target the general US population with the same amount of advertising dollars...Below are the detailed results of the ads that we ran. The two most important stats for us are (1) 756 people ordered a VSG and were subscribed to our 12-part email series about eating veg, and (2) 157,512 people saw one of our pro-veg ads in their Facebook Newsfeed...

Lot of great points here and angles to follow up on.

I do want to re-assert that enormous 80% recidivism rate, and how strong these (very valid) counter-narratives would have to be to defeat our original assumptions. Consider:

Again, there have been a lot of great points raised and I'm tempted now to fund a follow up implementing some of these fixes. At the same time, I think it's important to step back and think about how strong these influences would have to be to overcome that monster 80%.

I'm not sure your interpretation of the 80% number is correct. As you originally presented it, 80% of people becoming vegetarian stop within a few years.

Jonathon, thank you for sharing the results of the MFA study and for drawing attention to the Faunalytics research showing the high recidivism rate. As others have said, I would be concerned that those who have lapsed are more likely to lapse again in the future, but I still think this is incredibly promising. In our original study, we found that more than a third (37%) of former vegetarians/vegans say they are interested in re-adopting the diet.

For those interested in the details, this blog describes the various reports and resources that we produced, including access to the full dataset.

Get it peer reviewed.

"Given the extremely high recidivism rate, we reasoned that most of the people who had “liked” a vegetarian Facebook page in the past would have gone back to eating meat."

"The average cost of getting a person in the former-vegetarian community to pledge to go veg (again) and order an MFA Vegetarian Starter Guide was about 2-3 times less ($2.65) than for the general population ($5-$8)."

An alternative hypothesis is that people who were already "veg" wanted to read the guides. Is there any way to rule this hypothesis out with the data you collect at the time people order the ads?

Excellent thoughts here. As I mentioned in another comment, a follow up study could probably handle that second issue by including a question asking if the requestors of the VSG are current, former or (aspiring) new vegetarians.

This would probably shed some light on your first point as well. If most of the people requesting the VSG identified as current veg, then that would indicate either the ads aren't working at enticing former vegs to try again, or there just aren't any former vegs in the audience. Either of these would be enough to kill this as a strategy for reengaging recidivist. Although, this would open up the question of why so many current vegetarians are interested in a Vegetarian Starter Guide?

I think it's a low enough rate that it's certainly plausible it's disproportionately current veg*ns. If you see the comments above about identity and why recidivists may be more likely to revert again, I would caution against making too large decisions based on this.

You might draw the conclusion that recidivists may not have gone veg for ethical or altruistic reasons; wonder if getting them to pledge veg again should lean on those motivations?