This post is part of our efforts to communicate more transparently what we are doing. This is the first post in a series of posts and will serve as mostly an update about the starter program specifically. Future posts will dive further into our strategy, Metrics & Evaluation (M&E), and our future plans.

What was the UGAP Starter Program?

We had a virtual two-week[1] starter program that was open to a larger group of schools than UGAP itself. It provided groups with virtual training and resources to prepare for the semester. This was our first time running this program and 81 universities participated, of which 56 were accepted to UGAP.

Groups were given a starter program guide that pointed to specific resources, attended a kickoff session focused on strategy and getting ready for the semester[2], and had a meeting with one of our starter program mentors where they discussed a plan for the coming semester. Participants who were preparing to facilitate fellowships were able to participate in facilitator training through EA Virtual Programs. We also offered two optional workshops, one on outreach and another on reasoning.

During the program, individuals from groups were invited to apply for UGAP where they could receive continued mentorship and a stipend. Ultimately, 56 groups ended up having at least one organizer participate in UGAP (which is going on now).

Why the starter program?

Overall, the starter program itself aimed to provide the following:

Running the starter program separate from UGAP was an experiment to do the following:

UGAP is still ongoing so these results only reflect the starter program.

We had 81 groups participate in the starter program with generally good feedback about the program: 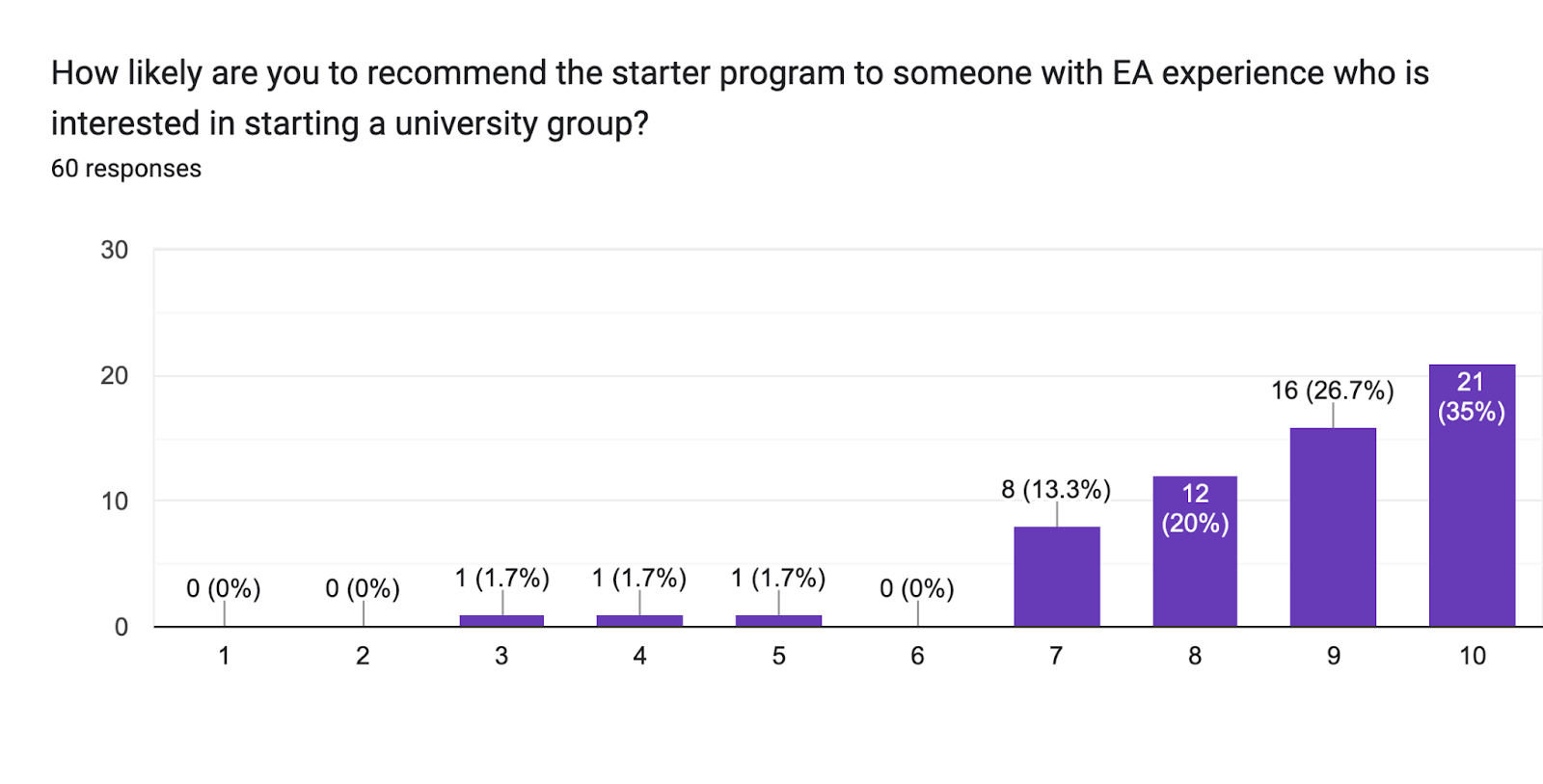 (Purple is cut off but is “Strongly Agree”)

Overall, we think these results are decent but not great. We think this indicates that this program is generally helpful on these dimensions but has the potential to be more so.

More details are listed in Appendix A but some takeaways for specific aspects were:

(Free response) What was the most helpful element of the starter program?

(Free response) What was the least helpful element of the starter program?

(Free response) How did your group strategy change, if at all from the starter program?

(Free response) Was there anything else not on these lists that you found helpful/unhelpful?

(Free Response) Any other feedback about the above resources or events?

(Free Response) What were your main takeaways from kickoff?

Appendix B: List of additional mistakes and future improvements

This is mostly to be transparent about mistakes we made and plans to fix them. These are based on user feedback. We have additional internal improvements we are planning on making. We are planning improvements now and will have additional capacity to address them. However, we still anticipate being capacity constrained and will consider the program in perpetual beta.