Rutger Bregman, historian, and author (including Utopia for Realists and Humankind: A Hopeful History) describes his personal view on philanthropy in a conversation with Effektiv Spenden here (German here).

In the Effektiv Spenden post donation survey he was mentioned more than any other person (e.g. more than Will MacAskill and more than Peter Singer). Our explanation is that he particularly good at reaching people from outside the existing EA community.

"Sometimes people can get the impression that “Oh, so you know what all the effective causes out there are and you are very dogmatic about that?” That’s not the case at all. Effective altruism is a question. It’s not an answer. It’s all about continuously asking yourself the question, is this the best use of my time, resources, and money? That’s what it’s really about. And I think intellectual humility is a really important value, and I think that’s also quite present in the movement."

On systemic change vs. individual change:

"There’s now this discussion going on amongst progressives and people on the left like: “Oh, we shouldn’t talk about individual change because that’s neo-liberal. We should all talk about system change”, but obviously we need to do both. If you look at the most impressive reformers and prophets and campaigners and activists throughout history, they all did it both. I’m now reading a book about Anthony Benezet who was one of the most important abolitionists, he’s called the father of abolitionism. He led the fight against the slave trade and slavery in the 18th century. If you would have said to him: “Oh, it’s all about the system. It’s not about the individual”. He would have said: “You’re a hypocrite.” Of course, it’s also about the individual, because he knew that he would be much more convincing if he actually did what he preached."

On why he signed the Giving What We Can Pledge:

"Because human behavior is contagious. We’re not individuals, we’re not lone atoms, but we influence each other all the time by our behavior. It’s just contagious. Giving can be like that as well. That’s why I think it’s important to be public about your giving, not to show off, you need to be a little bit careful there, but that’s also why I signed the Giving What We Can pledge to say. Look, people, if you like my work, this is what I find really important and it has made a big difference in my life to donate at least 10% of my income to highly effective causes. I think that actually, as a best seller author, you can go a little bit higher than 10%, but 10% is a good place to start."

Since the interview is quite long feel free to share the video below with everyone who might be interested but can't be bothered for more than one minute. 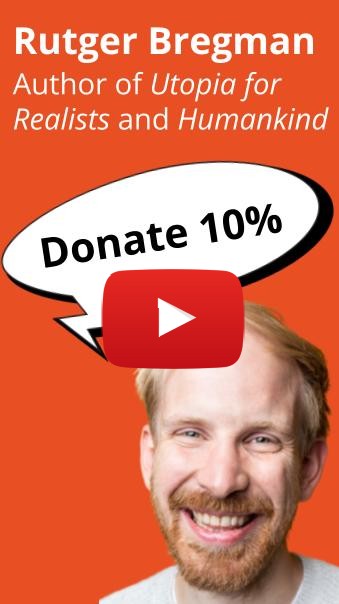 Such a great interview – well done! And go Rutger, what an amazing human!