Our paper "Islands as refuges for surviving global catastrophes" is published in Foresight. The preprint is here.

This article continues a series of articles which explore the plan B of global risks mitigation which is an attempt to survive a possible global catastrophe (where plan A is prevention, and plan C is leaving a message to the next civilization in Earth).

The survival on islands is possible only in case of a very narrow range of catastrophes (likely, less 1 per cent of all possible catastrophes), but it is still much cheaper than creating space refuges on Mars or Moon, and moreover, most needed infrastructure on islands already exists, like research scientific bases on remote islands, so converting them in a catastrophic shelter will be thousands time cheaper than creation of the space refuges and could be done much quicker in case of emergency.

Different islands may help to survive different types of catastrophes.

A criterion for island refuge is suggested and only a few from millions exiting islands are suitable as refuges. The most suitable for such refuge is Kerguelen group of islands, as they are very remote, don't have airstrip, could provide food, have mountains and small scientific base.

A combination of a nuclear submarine converted into a refuge, an island as its base and an underground bunker on that island could provide most diverse and effective way of survival on Earth (Branson, btw, survived hurricane Irma on a wine cellar on his Necker Island.)

Abstract. Islands have long been discussed as refuges from global catastrophes; this paper will evaluate them systematically, discussing both the positives and negatives of islands as refuges. There are examples where isolated human communities have survived for thousands of years on places like Easter Island. Islands could provide protection against many low-level risks, first of all bio-risks. However, they are vulnerable to tsunamis, bird transmitted diseases, and other risks. In this article, we explore how to use the advantages of islands for survival of global catastrophes. The large number of islands on Earth, and their diverse conditions increase the chance that one of them will provide protection from a catastrophe. Additionally, we could increase this protection if an island were used as a base for a nuclear submarine refuge (the “Yellow submarine” project), and/or combined with underground bunkers, and/or extremely long-term data storage. We explore the requirements for survival on islands, their vulnerabilities, and ways to mitigate and adapt to risks. We look at several existing islands, suitable for the survival of different risks, timing, and budgets. To end, we will compare islands with different types of refuges, and look for places similar to islands, which could also provide protection.

This table from the article presents the relation between different catastrophe sizes and needed refuges. 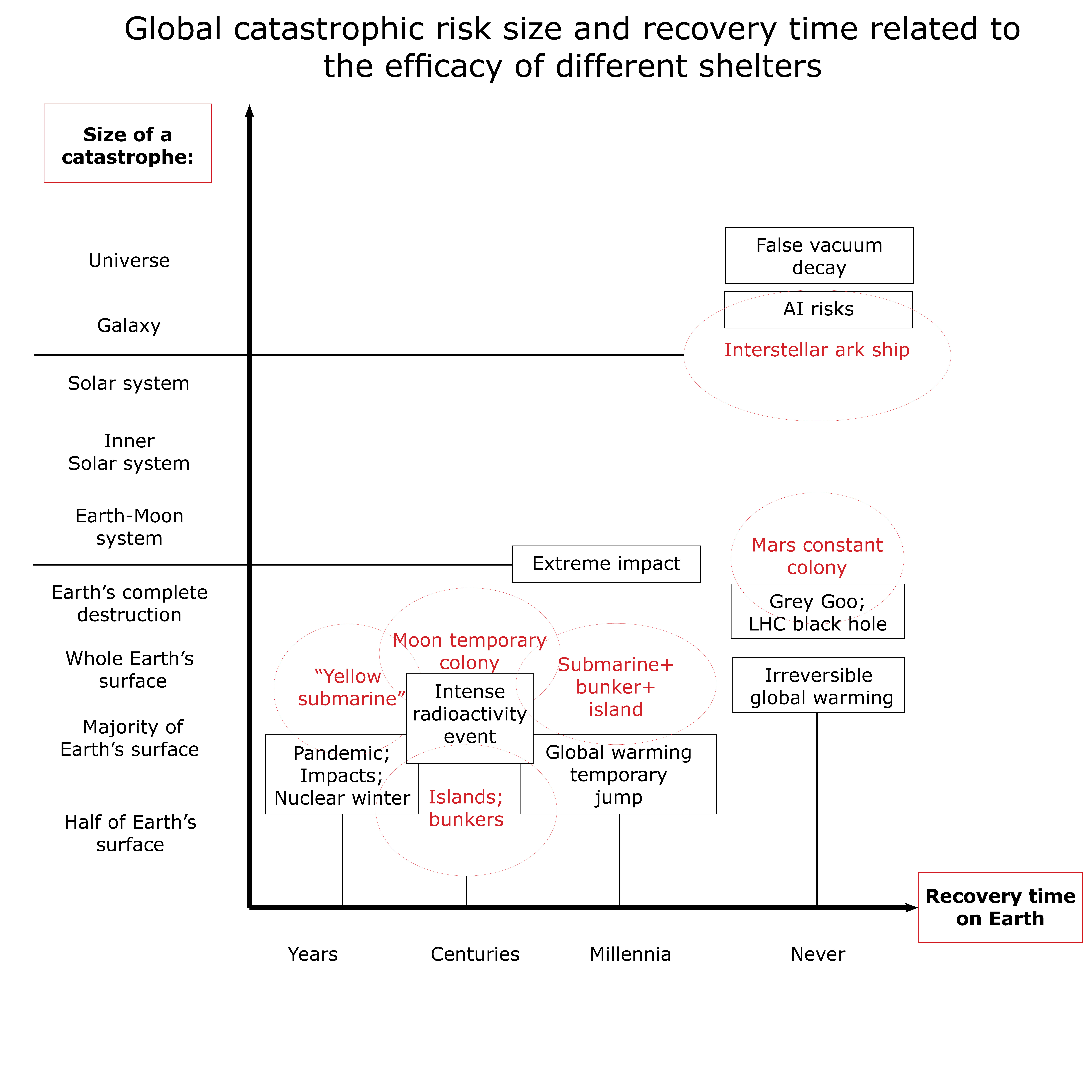