Risks are bad. You probably noticed this if you've ever lost your wallet or gone through a pandemic. However, wallet-loss risk and pandemic risk are not equally worrying.

To assess how bad a risk is, two dimensions matter: the probability of the bad thing happening, and how bad it is if it happens. The product of these two dimensions is the expected badness of the risk. 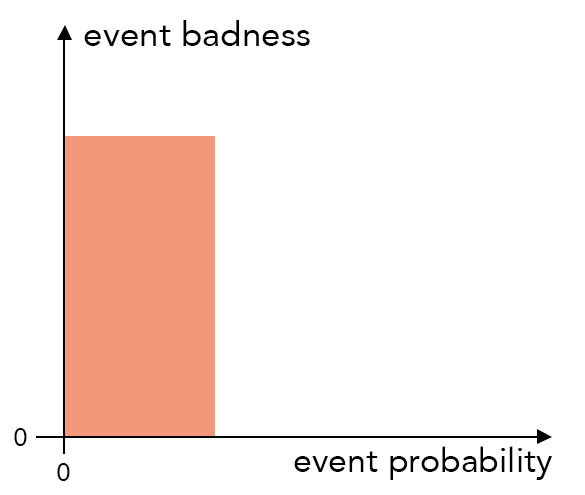 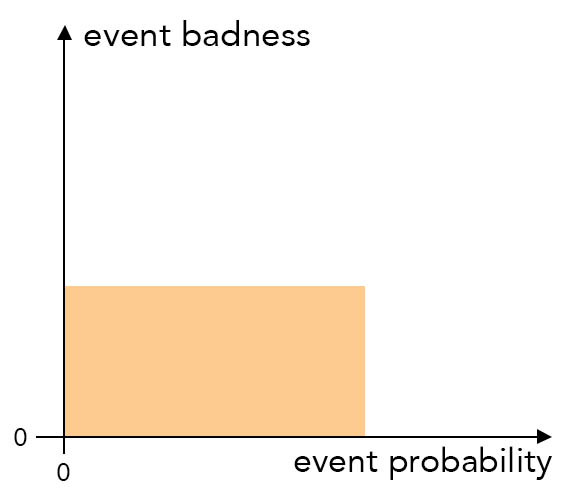 (Throughout this post, axes are intentionally left without scales, because no quantitative claims are made.)

Some events are catastrophic. This is typically the case when many people die at the same time. Some catastrophic events are even existential: they would permanently destroy human civilization. Which is really bad. To account for this extra badness, we have to give existential rectangles an existential badness bonus. 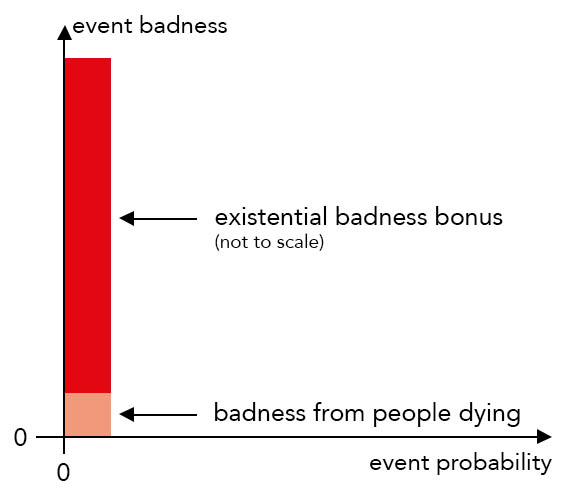 We can be pretty sure that the loss of your wallet will not destroy human civilisation. For some other risks, it is less clear. A climatic, artificial intelligence, pandemic or nuclear catastrophe could be existential, or not. These risks can be decomposed into existential and non-existential rectangles. Here is an example for pandemics: 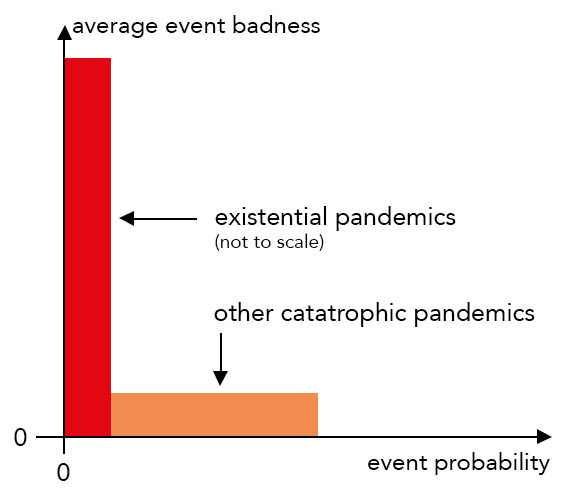 What we want to do is still to reduce the total area of the rectangles. To do this, we can still use the prevention approach. For example, we can have better peace treaties to reduce the probability of a nuclear war.

As for mitigation, there is something different about existential rectangles: their height cannot be reduced. This is because, by definition, an existential risk is an event that permanently destroys civilization. We can't make the end of humanity feel much better. What we can do is try to avoid it. To do this, we can either improve our response to catastrophes, or improve our resilience. 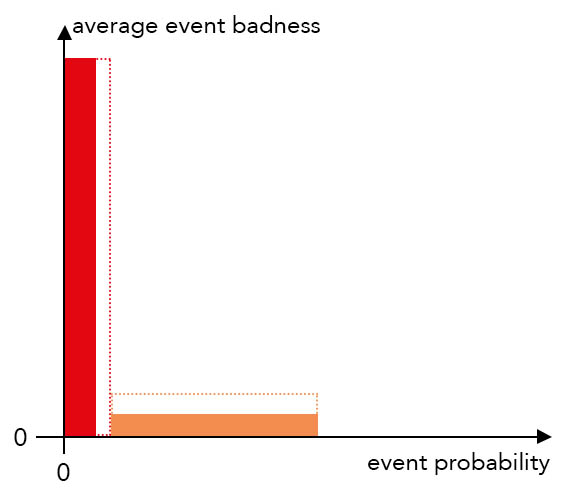 We can also choose to focus specifically on the scenario where civilisation is destroyed. For example, some people have built a seed vault on the island of Svalbard, in Norway, to help us grow crops again in case everything has been destroyed by some global catastrophe. This sort of interventions try to improve our resilience, that is, to give civilisation more chances to recover. A resilience intervention converts some existential risk into non-existential catastrophic risk.

Sometimes risks can have different origins. For example, the next pandemic could be natural, or it could be engineered. We could use more catastrophic rectangles to integrate this distinction. 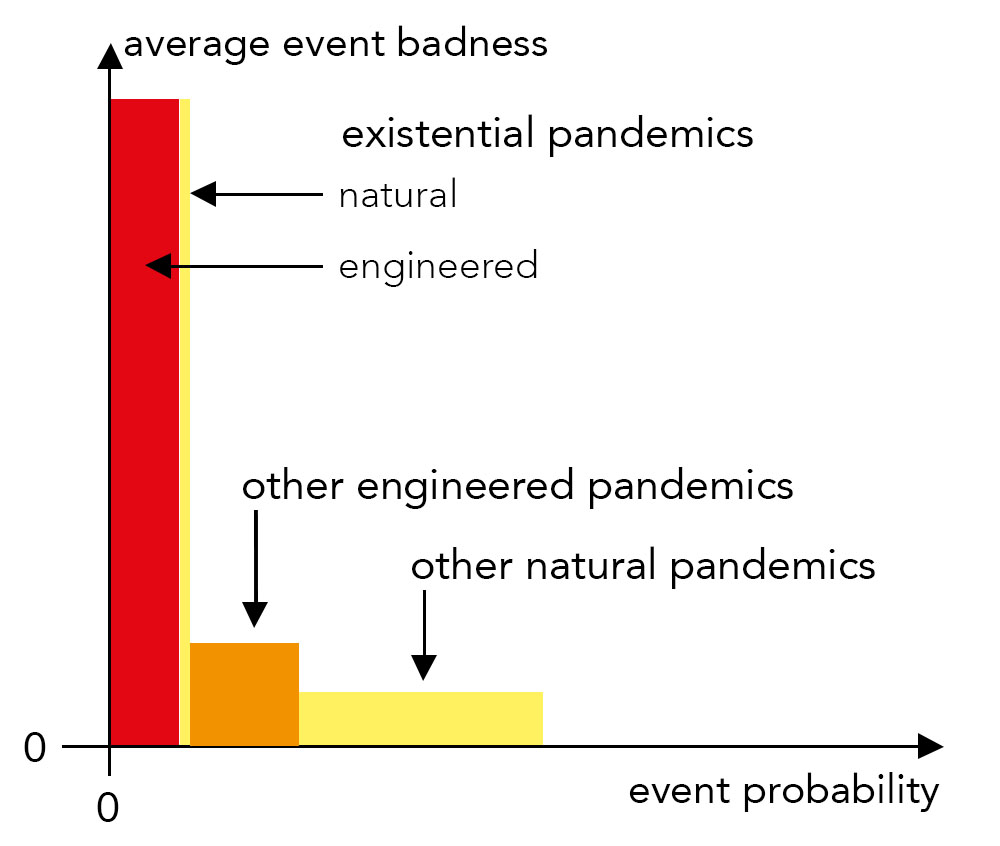 The same idea applies when we consider several risks at the same time. The Svalbard seed vault could be useful in any situation where all crops have been destroyed. It is thus better than an intervention that would reduce existential risk by the same factor, but only for one specific catastrophic risk.

All these rectangles are catastrophically simplistic. Many things here are highly debatable, and many rectangular questions remain open. For example:

I hope this way of visualising risks can help better communicate and discuss ideas about global catastrophic risks. If you want to make your own catastrophic rectangles, feel free to use this canva template!

I wrote this post during the 2021 Summer Research Program of the Swiss Existential Risk Initiative (CHERI). Thanks to the CHERI organisers for their support, to my CHERI mentor Florian Habermacher, and to the other summer researchers for their helpful comments and feedback. I am especially grateful to Silvana Hultsch, who made me read the articles that gave me the idea of writing this. Views and mistakes are my own.

I think these are visually appealing graphics and they can help emphasize the importance of existential risks as well as illustrate the basic concept of [average expected impact = probability X magnitude]. My main concern with them is that it seems like they could be a bit too reductionist: for any given event/risk, you can imagine it as having multiple possible outcomes each with their own probabilities of occurring and magnitude. For example, a given pandemic may have a 10% chance of occurring in a given time period, and if it does occur, it may have a 20% chance of killing 1M people, a 10% chance of killing 5M people, 1% chance of killing 100M people, and a 0.1% chance of killing ~7B people. To represent that, you would basically need to create a curve (probability X impact distribution) for each event instead of a rectangle.

Additionally, there is the issue about interactive effects of catastrophes—e.g., a given pandemic or a given nuclear exchange may not individually lead to extinction or total civilizational collapse, but it might be the case that together they have a very high chance of doing that.

To represent that, you would basically need to create a curve (probability X impact distribution) for each event instead of a rectangle.

Yes! This is actually the third open question at the end of the post. I'd be very curious to see such a curve, if anyone wants to make one.

I really like your second point, and wonder how the interactive effects you mention could be represented graphically.

Unrelatedly, I would like to see 3D cube graphics for importance, traceability neglectedness estimates, as exist on 80k where the volume is the priority.