An under-appreciated observation about giving now vs later

GiveWell's staff are mostly giving their money in this year, rather than saving to give more in the future. One reason cited by a staff member is:

This is true. But does it compound faster than the alternative over all timescales?

Paul Christiano has pointed out that while charitable giving such as cash transfers and basic health services probably compound (socially) very quickly to begin with (maybe 20% in the first year), these incredible rates of compounding must decline over time. Otherwise these small charitable acts would quickly become responsible for all of the good in the world. What sustainable level of compounding can they achieve in the long run? The global economic growth rate, which would mean they converge to, at most, a fixed share of the world's economy or welfare.

High-risk business investments by nature compound more quickly than the global economic growth rate. This is the classic 'r > g', which has become widely understood due to Piketty.

As a result, in the long term, investing at this higher rate to fund a much larger donation long in the future could be better.

For the sake of illustration, let's say the global economic growth rate is 3%, the return on business equity is 5%, and the internal rate of compounding of say, cash transfers, is 20% in the first year, 18% in the second, then 16%, 14%, 12%, 10%, 8%, 6%, 4%, and 3% thereafter. (This set of numbers is probably generous to the 'giving later' strategy, but it will help to highlight the difference.) Holding all else constant, how long would the 'invest and give later' strategy take to catch up?

The answer is about 40 years: 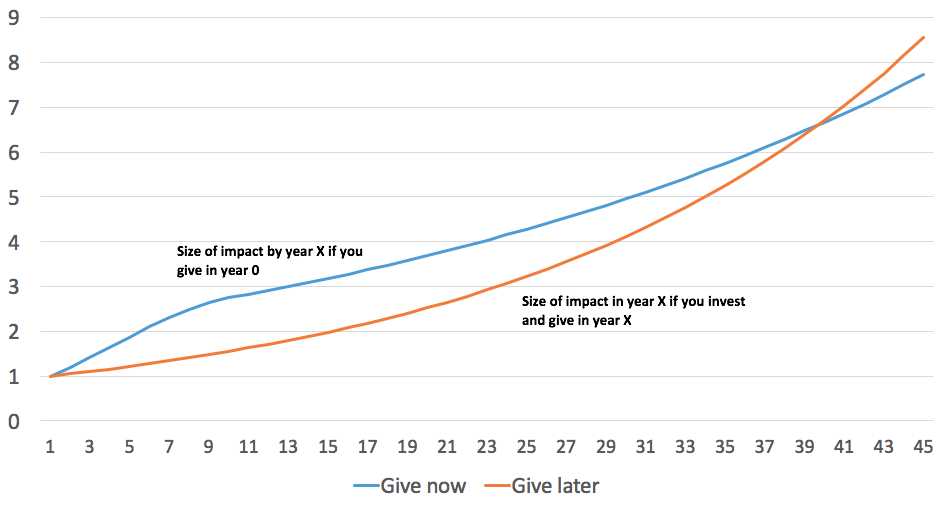 What if you also count the same initial burst of rapidly compounding social impact at the point that you give later - say, in year 28? 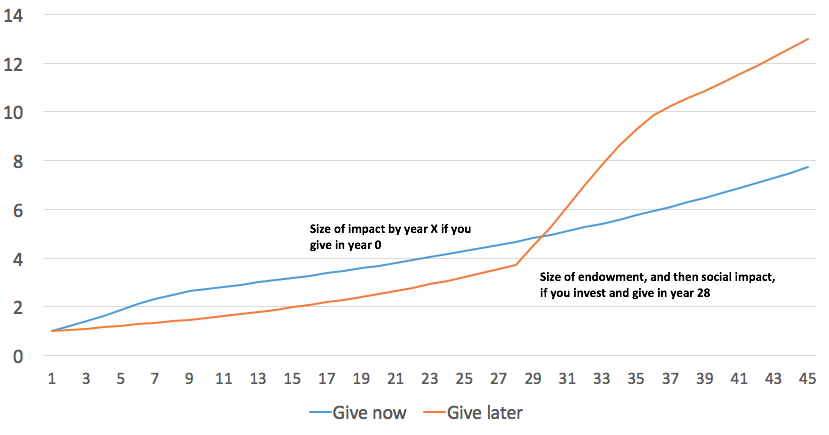 You get a bigger take-off, because the donation itself is much bigger when given later. Now 'give later' looks significantly better.

I think the natural response is that 'GiveWell classic' donors expect opportunities to end extreme poverty to dry up significantly over such a timescale. It may be that extreme poverty and malaria are eradicated, or nearly so, by that time. By then the world will be richer and the very poor much less numerous, and so the difficulty of finding extraordinary opportunities much higher. This seems entirely plausible.

If the cost effectiveness of the best giving opportunities were to decline by 2% each year - roughly a halving every 40 years - then the 'invest and give later' strategy won't be able to catch up.

Whether the decline is actually that steep, I'm not sure.

And if you're giving to causes other than global poverty, quite different considerations can dominate.

"...these incredible rates of compounding must decline over time. Otherwise these small charitable acts would quickly become responsible for all of the good in the world. What sustainable level of compounding can they achieve in the long run? The global economic growth rate..."

"High-risk business investments by nature compound more quickly than the global economic growth rate. This is the classic 'r > g', which has become widely understood due to Piketty."

Maybe I'm missing something, because I see this pair argued a lot, but when phrased this way this pair of arguments seem to be in tension.

It must be said that Paul, AFAIK, doesn't frame the argument this way. From the post you linked to:

"Here’s the problem: if you give your money well, it might compound much faster than it would have in your bank account—but only for a while. Over time the positive effects will spread out more and more, across a broader and broader group of beneficiaries, until eventually you are just contributing to a representative basket of all human activities. Eventually, my investment will compound at the rate of world economic growth, rather than at the particularly promising interest rate I was able to originally identify."

In other words, with an investment the return keeps coming in to you and you can continue to direct it to activites which are above-average promising (or above-average risky). But with a donation you essentially lose control over it immediately and so you shouldn't expect it to stay in above-average promising territory for very long at all; the timeline on 'eventually' is short. If you could somehow capture a fraction that initial high social return and maintain control of it, e.g. if from that initial 20% return on cash transfers you received 6%, then donating would dominate, but in practice that's very difficult. Microfinance is arguably an attempt to do exactly this, but unfortunately doesn't appear to have the great social returns we're looking for.

Off-topic, but thinking about it in terms of control also highlights why meta-activities might well be in a different category. If you give money to a meta-activity that generates 'EA dollars' at a high enough multiplier on a short enough timeframe, then while you've lost control of your money the control has been passed on to people who you might reasonably expect to also be searching for above-average promising activities.

Hey AGB, I remember thinking of the same point years ago and Robin Hanson explaining to me how it works. Basically it is the case that if someone left all their wealth in business equity to accumulate without any interference, they would slowly converge on owning all the wealth in the world (at least assuming a stable investment environment).

The difference is that social impacts like better health or education are not recaptured by the donor, and instead just diffuse outwards until the gains are spread across a wide range of people and projects. However a business investor gets to invest in whatever looks most likely to compound rapidly, then takes the surplus back as dividends or capital gains, and can then shift their investment to whatever other new project looks likely to compound most rapidly. They keep repeating this cycle indefinitely.

However, this never actually happens and in fact there are legal restrictions on trusts and endowments that make it unlikely. Instead, accumulated wealth is eaten away by withdrawals for consumption, 'wastrel sons', being divided between many heirs who eat it, destruction due to revolutions/inflation, and so on.

However, this never actually happens and in fact there are legal restrictions on trusts and endowments that make it unlikely. Instead, accumulated wealth is eaten away by withdrawals for consumption, 'wastrel sons', being divided between many heirs who eat it, destruction due to revolutions/inflation, and so on.

Is this a reason to be against the invention of anti-aging technologies, since they might result in a particular patient, long-lived investor with a midas touch swallowing the entire economy?

Basically it is the case that if someone left all their wealth in business equity to accumulate without any interference, they would slowly converge on owning all the wealth in the world (at least assuming a stable investment environment).

It's actually pretty easy to see that this happens. If you buy and hold some stock and you always re-invest dividends, you will not lose stock unless all your companies go bankrupt, and you will slowly gain stock as you buy more from the dividend payouts.

I agree with you that the positions are not actually symmetric, and I think your second paragraph is close to word-for-word what I said in my penultimate paragraph. However, if you phrase it as you did in the OP (and this isn't just you by any means), then your arguments are symmetric and so you've proved nothing. I think it's worth explaining what makes actually these two cases different.

The reason I think it's worth explaining is highlighted in my last paragraph; what might seem like me being pedantic actually has very significant implications for how you evaluate meta-activities, and indeed I've clashed with Robin Hanson on that exact issue.

I was only targetting this for donors focussed on global poverty - if you're thinking about x-risk or movement building, I think other considerations dominate entirely.

It looks like you're comparing giving now to investing (but never giving), not investing and giving later. The latter requires specifying when the 'giving later' happens.

With your figures you get 8 years before donation returns fall below business equity's 5% rate. So saving for one year, then donating, will come out ahead of donating now on a 9 year time scale, not a 40 year time scale.

Do the new labels fix this for you?

They still mislead about how long it takes for a 'invest and then donate' strategy to beat 'donate now. As I said above, with your numbers invest and donate can win in 9 years, not 40. The problem is that 'invest and then donate' corresponds to many different strategies for different donation dates. If you completely ignore the benefits after year X, then waiting to donate in year X will look bad because the rapid post-donation compounding is pushed out of the window you're looking at (like gaming the CBO 10 year window in U.S. budget fights).

The strategy (for your figures) that maximizes returns with a horizon of X years, where X is 9 or greater, is to save and invest, the donate 8 years before X, so that you get the last year of above 5% returns in year X:

You should add that curve (size of impact in year X, donating 8 years before X) to your graph, which would pass 'donate now' at 9 years and then go substantially above it at 40 years.

Theoretically, it is possible that Life can be better or worse forba given level of economic prosperity. Doesn't this challenge the model (not that I think 3% a year multipliers are likely over the long term)

I'm not sure how to deal with this but I think the original argument is likely to work in some more robust/limited form. Or may it has to be limited to economic productivity only.

I think the only thing that changes is that you might disaggregate the economic flowthrough from the other stuff, which may or may not change the upper bound, and may or may not have higher returns depending on the theory and particular trade off between giving opportunities. I think this matters more with things that seek to fundamentally shift society. Imagine anti imperial outfits getting more traction earlier on, or slavery, or feminism. It could plausibly have lasting effects out of proportion for longer than donating to a poor house?