Updating on the passage of time and conditional prediction curves

What this is: A technical post about how I believe binary forecasts should be made. There are probably some minor mathematical mistakes, but I doubt there are major mistakes.

The benefits of thinking with conditional prediction curves are large, both from the point of view of the individual forecaster, the forecast aggregator, and the scorer.

Some downsides of using prediction curves include:

But prediction curves help us in understanding forecasting too.

Define the variables X:binary outcome variable, success if equal to 1,T:event time, i.e., the time when the outcome X becomes known. You can think about X and T using Metaculus questions. For instance, if the question is "Will a non-state actor develop their own nuclear weapon by 2030?", X would be 1 if a non-state actor develops a nuke by 2030 and 0 otherwise. The random variable T equals 2030 if X=0 and the point in time the nuke is developed if X=1.

A prediction curve for X,T is a random function p(t)∈[0,1], that forecasts the outcome X at every time-point t. If t>T, I'll assume that p(t)=0 if X=0 and 1 otherwise, so you can't make any studip predictions after the event time to screw yourself over.

Define the conditional prediction curve as the expected forecast at time t given the information at time s, but conditioned on the event not yet having happened ps(t)=E(p(s)∣T>t),=E(E[X∣Fs]∣T>t),=P(X=1∣Fs,T>t). Then ps(t) is the best possible prediction curve based on Fs in the sense that ps(t)=argminf∫∞sE[s(f(t),X)∣Fs,T>t]dt. You can interpret ps(t) as 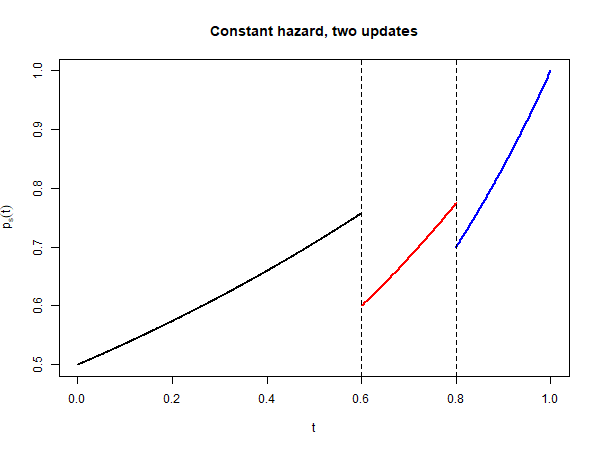 Questions of the sort described above are probably too general to work with, but most can be placed into one of three categories.

Most questions on Metaculus can be written on the form "Will x happen by time τ?". Examples include "Will a coup or regime change take place in Russia in 2022 or 2023?" and "Will Putin and Zelenskyy meet to discuss the peaceful resolution of the Russian-Ukrainian conflict before 2023?". We will look at the questions formulated on the form "Will the event x fail to happen by time τ?" as it makes the mathematics slightly cleaner.

The conditional prediction curve ps(t) is non-decreasing in t for every s. Moreover, ps(t) is strictly increasing in t under the very minor condition that the hazard rate of T is strictly positive. (This means that there's a possibility of the question resolving at every time point t.)

Some questions on Metaculus can be written on this form. Examples include "Will Ontario's Conservative Party (PC) win the a majority in the election on 2022-06-02?" and "Will Volodymyr Zelenskyy be named Time Person of the Year in 2022?"". In these questions the resolution data is fixed at τ, so time has no influence except through the information source Ft. Thus the prediction curve is constant in t, and we're in the intuitive setting that we cannot expect our prediction to change in the future.

Type 3: "Will the event x happen before the event y?"

Questions of this nature are uncommon on Metaculus. The only example I found in my search was "Alexei Navalny to become president or prime minister of Russia in his lifetime?" This questions resolves positively if Navalny becomes PM/president (x) happens before Navalny dies (y). Models for problems of this nature are known as competing risk models.

To model it, define the two times S and R together with X=1[S<R] and T=min(S,R). Then ps(t)=P(X=1∣Fs,T>t),=P(S<R∣Fs,S>t,R>t). There is no general regularity in ps(t) unless we know something special about the hazard rates of S and R.

On one hand, the additional complexity suggests that questions of the "Will the event x happen before the event y?" form should be avoided. One the other hand, they are quite easy to model, provided you're willing to provide the prediction curve or hazard rate for both variables S and R. This can be done using the techniques in the next section.

Parametric conditional prediction curves in "Will the event x fail to happen by time τ?" types of questions

If you're willing to assume a parametric form for the hazard rate you can construct conditional prediction curves (semi-)automatically.

Suppose we may assume the hazard rate is constant, i.e., hs(t)=λs with λs unknown. Using the equation ps(t)=exp[−∫τths(x)dx] we see that ps(t)=e−λs(τ−t). If you know the point forecast p(s)=ps(s), we may use it to derive λs. Solving for λs, we find that λs=−logp(s)τ−s, so the implied conditional prediction curve is ps(t)=elogpt(τ−tτ−s)=p(s)τ−tτ−s.

Suppose the current date is in the middle 2022 and we consider the "Will Putin and Zelenskyy not meet to discuss the peaceful resolution of the Russian-Ukrainian conflict before 2023?". Then we can put τ=1 and s=0.5. In the plot below we show p(s)=0.2,0.6,0.8, where 0.8 was the Metaculus prediction at the time. When p(s) is reasonably large, the conditional prediction curve is almost linear, making p(s)+(1−p(s))τ−tτ−s a reasonable approximation to ps(t). 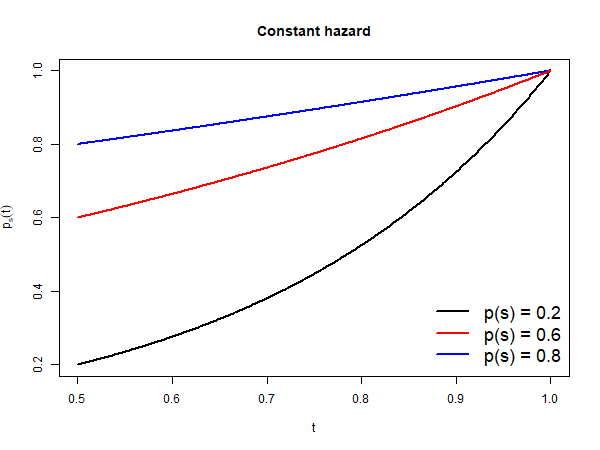 The benefits of assuming a constant hazard rate lies in its simplicity.

The Weibull hazard is usually written on the form h(t)=bktk−1. It is used to model increasing (when k>1) or decreasing (k<1) hazard rates. The conditional prediction curve is ps(t)=exp[−b(τk−tk)].

Take the logarithm of p(s) and solve for b −logp(s)τk−sk=b. The conditional prediction curve can be written in terms of k and p(s) ps(t)=p(s)τk−tkτk−sk.

Now you can plot the hazard rate and the conditional prediction curve while sliding k around. You can stop at the k you're most comfortable with.

Suppose r>t and 1>ps(t)>ps(r)>0. We need to solve logps(t)τk−tk=logps(r)τk−rk This is equivalent to solving τk−rkτk−tk=logps(r)logps(t). Since 1>ps(t)>ps(r)>0 we have 1>logps(r)logps(t)>0. In addition, 0<τk−rkτk−tk<1 is increasing in k, as can be verified by taking its derivative, and has asymptotes at −∞ and ∞, so the equality has a solution that can be found using root-finding.

This plausibly a question with increasing rate. The description says that "As of May 2021, the Federation of American Scientists estimated India as having 160 nuclear warheads." In order to reach 200 warheads, they first have to reach 161, then 162, and so on, making it more likely they finally reach 200 at a given instance as time goes on.

Due to the way I've formulated the mathematics, we have to analyze the opposite question "Will India have less than 200 nuclear warheads at the end of 2023?" instead.

Suppose I make the forecast p(s)=0.95 at time s=0 equal to the the last day of 2022, and suppose that τ=1 on the last day of 2023. Then p(s)τk−tkτk−sk=0.95(1−tk). The plot below shows the resulting prediction curves for k∈{1/3,1/2,1,2,3}. To interpret the red line, observe that the prediction barely changes when t is small enough. This reflects that the probability of India obtaining 200 nukes is small in the short term. However, as t approach 1 and they still haven't acquired nukes, the probability of them not acquiring them increases rapidly. 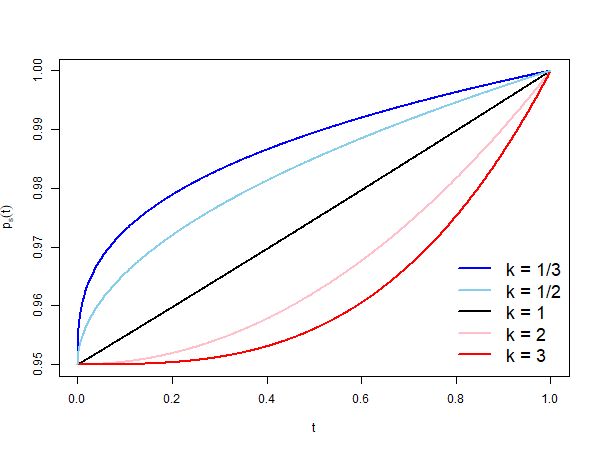 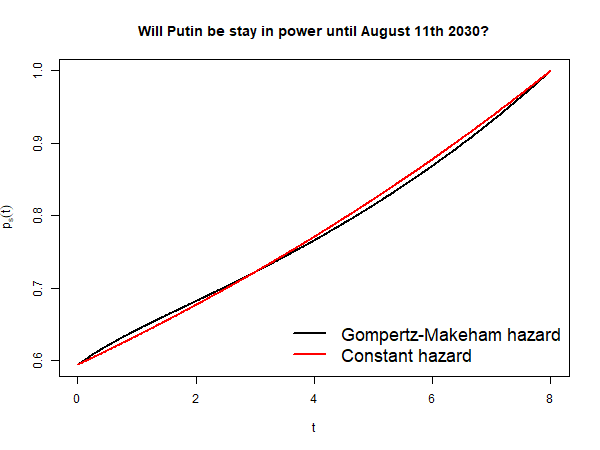 It appears that my complicated Gompertz-Makeham modelling has been for naught, as the prediction curve is virtually identical to the constant hazard prediction curve. I don't know if we should expect this to happen in general or not. It might be because the two Gompertz components cancel each other other out.

As a side effect, this analysis also yields a density for Date Putin Exits Presidency of Russia. The expression for the survival curve is P(T>t)=exp[−k∑i=1αiβi(eβit−1)−λt], which can be differentiated to find the density f(t) as seen below. 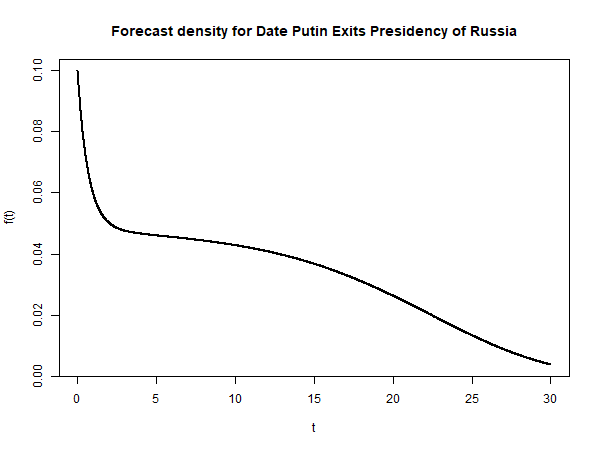 I feel quite confident that conditional prediction curves is the best option for handling the time problem in binary forecasts. There are some alternatives, such as providing the entire distribution p(x,t), but that looks quite cumbersome. There are many benefits from using conditional prediction curves (for the forcasters, aggregators, and scorers), they are not too difficult to implement for forecasting platforms, and it should be possible to develop good tutorials that makes forecasters comfortable with them.

I don't have too many hints for how to choose among the different hazard functions. But you might use empirics as a guide. For instance, the Gompertz--Makeham hazard appears to fit mortality data better than the Weibull--Makeham hazard but the difference appears to be marginal. If you're dealing with questions such as "Will Putin be ousted as president of Russia by 2030?", such observations might help you. There are also theoretical reasons to prefer one over the other in some cases, but I don't know if they are useful.

It could be reasonable to mix the Weibull and Gompertz components too, for instance following the same kind of reasoning as in the Putin example above. There are infinitely many hazard functions I haven't talked about at all, such as the log-normal hazard. Some of these may have nice interpretations that could help the forecaster.

Proof that s′w is proper

We show that the weighted version s′w(q,X)=∫∞t0w(t)s(q(t),X)dt is a proper scoring rule for any positive weighting function w. Let p(t) denote the true probability P(X=1∣Ft), where Ft is the information observed until time t. Let q(t) be any other stochastic process adapted to Ft.Since s(q(t),X) is non-positive, we can apply Fubini's theoremto get

The scoring rule s′(p,X)=∫∞t0s(p(t),X)dt has the weakness that early forecasters are penalized. If the scoring rule is bounded above, such as the Brier score, early forecasting can be incentivized by setting p(t)=1−X for all time points t before the forecaster made their first forecast. Other than that, it appears to me to be a reasonable scoring rule to evaluate forecasts in time. There are other potential scoring rules, such as s(p(T),X), which do not appear to be proper for predicition curves; but it might also be that prediction curves aren't the correct abstraction.

Proof of Proposition 2, that ps(t) is non-decreasing in t for every s.

I felt so strongly that this deserved another upvote that I was moved to create myself a forum account. To the extent that this work is really original I would actually encourage you to consider working it up into a journal article. As long as that isn't going to take all the fun out of it.

I will probably try to write a paper in the future but have some other stuff to finish first. Even though the concepts and mathematics are worked out, rewriting this post into a journal article would probably take a month. Thanks for the encouraging words though =)

That said, if anyone would like to write a paper about this topic together with me, please get in touch.

Perhaps the way to enable forecasters to have automatically-updating forecasts based on the passage of time is to ask questions in pairs:

(2) Conditional on X happening by Date, when will X happen?

The probability density function a forecaster gives for 2 can then be used to auto-update their binary forecast for 1.

That's sufficient information to calculate the conditional prediction curves I'm proposing. What you need is Ps(X=1∣T≥t). If you have Ps(X=1) and Ps(T≥t), which you can find by integrating the density for "when will X happen", you can calculate Ps(X=1∣T≥t).

Neat! I thought this was great!

As a nitpick for the integrated scoring rule, as written it looks like the integral doesn't converge.

I think the integral will converge when we use bounded scoring rules. The integral can be rewritten to have its integration limits finite with probability one, as it in practice integrates from 0 to the event time T, which should be assumed to be finite with probability 1. (The score is 0 from T to ∞, since p(t) equals the outcome at any time after T. I might not have been sufficiently clear about that though.)