Marketing Effective Altruism: What can we expect from book sales?

This is a post that I drafted a couple months ago and have been meaning to post for the past few weeks, but I have been caught up in the frenzy of Peter Singer’s book launch. It is rather rough around the edges, but I wanted to put it up before we get our first week sales figures back.

Our campaign for ‘The Most Good You Can Do’ was launched this week with two major pieces in the Wall Street Journal, and New York Times.  You can find out more and join Peter Singer’s book tour here.

Over the next year, at least four books will be published which discuss and promote effective altruism. These books represent a unique opportunity to spread the word and encourage media discussion throughout 2015. Not only could this help to grow the movement extensively, but by potentially raising its profile among thought leaders and decision-makers, it could massively increase our impact. 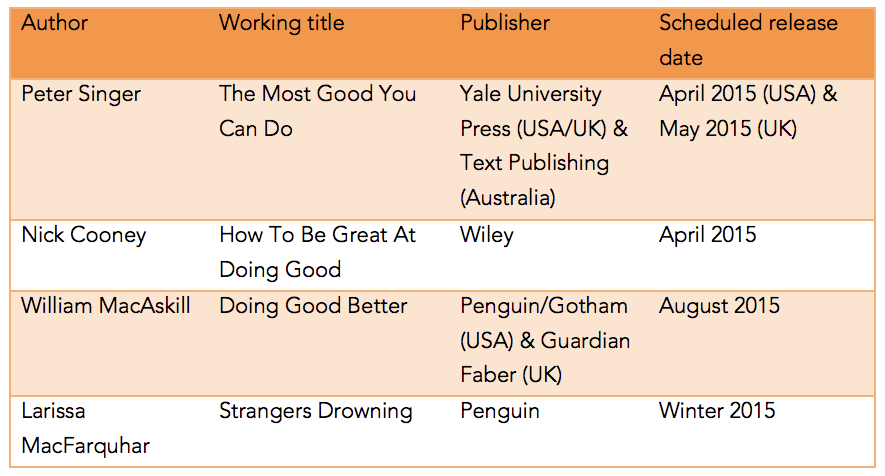 Of course, for the books to have this kind of impact, people need to hear about them, buy them, and ultimate read them. In the case of William MacAskill and Peter’s Singer’s books, the Centre for Effective Altruism (through its Effective Altruism Outreach subteam) will be taking a lead role in promoting them.

But time spent on marketing is time we could have been spending on other outreach efforts. How, then, can we make sure that we’re not spending too much time on this? What effect can we expect our marketing to have?

In this post, I will attempt to answer the following questions:

The information in this post is based on my discussions with dozens of authors and publishing industry professionals, along with a brief literature search regarding quantitative models. My primary motivation for writing this analysis is to share the information set out in the summary at the top of this piece.

1. What are the expected sales figures for these books?

Predicting the number of books sold is far from an exact science. In order to make some rough estimates, we need to draw conclusions from historical data and the behaviour of publishers.

The spread of books sales appears to be power law distributed. This is supported by a 2007 paper on power law distributions in empirical data, and it matches the experience of most of the industry people I spoke to. (Unfortunately it is very expensive to get access to large datasets on book sales.)

Power law distributions are characterised by an initial sharp decline, which then levels out into a long tail. As a result, the the best-selling books don’t sell twice or three times as many copies as the median books, they sell thousands of times more copies.

Because of the shape of the distribution, the mean number of sales will also be far higher than the median. This means that the typical or median book sells relatively poorly. There are different estimates for how many copies the median book sells, but for professionally published books it is probably less than 1000 copies.

Bearing this in mind, it is predominantly the small chances of extraordinary success that bring up the mean or “expected” number of book sales to more substantial numbers. Our goal must be to chase these much higher numbers.

Publishers have their own metrics for estimating a book’s sales, using their own data and industry experience. Unfortunately we don’t have access to these estimates from the publishers of the books in question. However, I have attempted to reconstruct these estimates using the following process:

These figures should be taken as mean best guesses only. Any errors in my estimate of the advances will scale with the publisher’s formula applied, and in any case the size of the advance may be affected by other factors: for example, the size of William MacAskill’s advance was partly the result of a bidding war between different publishing houses.

So with that said, my best guess is that the publishers have estimated the following mean lifetime sales figures for each of the upcoming books:

Figure 3: Estimated mean sales based on publishers’ rule of thumb.

Based on this we should expect Larissa MacFarquhar’s book to do significantly better than any of the other books, and potentially better than all of the other books combined. The only downside to this is that her book is the least directly about effective altruism. As a result, we will need to put extra effort into harnessing the interest and momentum built by this book in order to get people more interested in effective altruism.

2. How much can we boost the sales of these books through marketing?

The success of these books will depend on some combination of marketing (whether by the publisher, specialist marketing firms or vendors), word-of-mouth publicity (which is itself largely determined by the quality of the book) and luck. But how does the interaction between these lead to sales figures?

I will now introduce a model that is often used to explain power-law distributions, which was suggested to me by Owen Cotton-Barratt.

Say that five new books are published at pretty much the same time, including one of ours. Let’s suppose that the total number of these books which our target demographic will buy is fixed: the question is how many of these purchases will be of our book rather than one of its rivals. 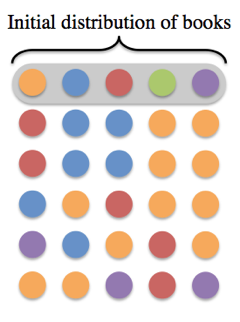 In this diagram, book sales are modelled as dots, with each colour corresponding to one of the five books. The initial distribution, shaded at the top, is based primarily on marketing - here it is assumed that the public buy one of each book.

However, after this point the choice of book for each additional purchase is based on word of mouth, and it is a function of all previously purchased books. In the diagram, it’s based at each stage on a random draw from the previous dots.

Now in the real world, the chances of being recommended a book depend not just on the number of people who have read the book before, but also on the quality of the book. So we can add an extra variable to the model, which is the quality of each book.

Book sales will be a function of n, the number of initial purchasers who bought the book (which depends on marketing), and j, the likelihood of this book being recommended above the others (which depends on quality).

This model also shows the importance of luck to the process. In the diagram, the colour green had an equal chance of being picked after the initial distribution. However time after time it was not picked, purely by chance, and each time the chances of it being picked decreased. Marketing could plausibly improve the initial distribution and quality could increase the chances of being picked, but bad luck could bring it all to naught.

3. Once the sales figures come in, how confident can we be that our efforts made a difference?

Unfortunately, the answer to this is “not very”. The exception is that if a book sells extremely poorly, we can be pretty sure it would have performed similarly poorly even if we had not marketed it, and that we had very little impact.

Presuming a reasonable degree of success, it is very difficult to establish how much of this is down to marketing, how much to quality and how much to luck.

There may well be anecdotal data which supports the idea that marketing has made a difference, but even this has limits. For example, one of the key drivers of sales of Nick Bostrom’s Superintelligence was Elon Musk’s tweet about the book. Now, during the marketing phase Nick and his team sent out dozens of copies to thought leaders, including to Elon Musk. But can we be sure that he read the book because of this? Perhaps word of mouth reached him instead? Perhaps it was some combination of the two? Even in a case like this, it is unclear whether the Future of Humanity Institute’s marketing efforts really did make that difference.

4. What does the success or failure of these books mean for future publication attempts?

As this is our first foray into publishing, we have had to devote significant resources to learning about the publishing and book marketing worlds. As a result, regardless of whether the book sells well or not, I would expect that next time around we would need to devote fewer resources to the project.

Let’s start by imagining that William MacAskill’s book is successful. In this scenario, if he were to write another book he would be more likely to get a good book deal. Also publishers, vendors and the media would be likely to take him more seriously next time around.

This would probably slightly improve the chances of this book also being a success. However, remember regression to the mean: if this book is particularly successful, we should expect his next book to do less well.

What about if his books is unsuccessful? Unfortunately, as discussed above it would be difficult for us to determine to what extent this was caused by marketing, quality or luck. The publishers would most likely say that we had simply been unlucky: most authors do not publish successful books on their first attempt, and in fact it would be somewhat surprising if Will’s first book was a major success.

Book publishing is a very high variance industry, and success is to a large degree down to chance or at least factors outside our control. With this in mind, I do not think that a failed first book would be more than a small update against attempting to publish more books in future. I would certainly not be surprised if Will or Peter decided to publish another book, even if this one is not a success.

As I’ve explained above, the vast majority of books sell relatively poorly. The reason that we’ve put our resources into supporting these authors is that there is a chance of them being among the few that sell extremely well. How well they do sell will depend on a combination of marketing, word of mouth and luck, although it’s difficult to attribute success or failure between these factors.

Mentioned in
10Please support Giving What We Can this Spring
5 comments, sorted by
top scoring
Click to highlight new comments since: Today at 6:25 PM
New Comment
[-]rossaokod7y 3

This Economics paper find a significant positive effect of celebrity endorsements on book sales - just some more evidence that this works!

Thanks! This was really well-written and informative.

Larissa is an extraordinary writer with a certain talent that analytical philosophers like Peter and Will lack, so it's interesting that her book has the highest expected sales! It's the least focussed on EA arguments but it'll be more artful than the others, which will make a nice change.

Good post. It is consistent with my experience in publishing. One other thing EAs can do to help promote these books is review them on Amazon. The star ratings influence purchasing decisions of many people, so maintaining a high rating for these books can boost sales.

What is the rule?

As this is our first foray into publishing, we have had to devote significant resources to learning about the publishing and book marketing worlds.

Bostrom's written several books, and works in the same office as CEA. Couldn't you ask him / his people?