Part 7: Increasing the Accuracy of Our Judgments

The Cognitive Science of Rationality

RationalityPsychology research
Frontpage
The Cognitive Science of Rationality
Rationality
Human reasoning
Types of errors
Rationality Skills
References
No comments
This is a linkpost for https://www.lesswrong.com/posts/xLm9mgJRPvmPGpo7Q/the-cognitive-science-of-rationality

Update, March 2021: I wrote this post ten years ago. Since then, we've learned more about the replication crisis in many fields, including psychology. Some of the specific studies I've mentioned here may be tainted by poor methodology or other problems. However, I still believe that the main ideas of the post (that human reasoning is flawed, and that there are ways we can improve it) hold true.

The last 40 years of cognitive science have taught us a great deal about how our brains produce errors in thinking and decision making, and about how we can overcome those errors. These methods can help us form more accurate beliefs and make better decisions.

Long before the first Concorde supersonic jet was completed, the British and French governments developing it realized it would lose money. But they continued to develop the jet when they should have cut their losses, because they felt they had "invested too much to quit"[1] (sunk cost fallacy[2]).

John tested positive for an extremely rare but fatal disease, using a test that is accurate 80% of the time. John didn't have health insurance, and the only available treatment — which his doctor recommended — was very expensive. John agreed to the treatment, his retirement fund was drained to nothing, and during the treatment it was discovered that John did not have the rare disease after all. Later, a statistician explained to John that because the disease is so rare, the chance that he had had the disease even given the positive test was less than one in a million. But neither John's brain nor his doctor's brain had computed this correctly (base rate neglect).

Mary gave money to a charity to save lives in the developing world. Unfortunately, she gave to a charity that saves lives at a cost of $100,000 per life instead of one that saves lives at 1/10th that cost, because the less efficient charity used a vivid picture of a starving child on its advertising, and our brains respond more to single, identifiable victims than to large numbers of victims (identifiability effect[3] and scope insensitivity[4]).

During the last four decades, cognitive scientists have discovered a long list of common thinking errors like these. These errors lead us to false beliefs and poor decisions.

Unfortunately, human irrationality is quite common, as shown in popular books like Predictably Irrational: The Hidden Forces that Shape Our Decisions and Kluge: The Haphazard Evolution of the Human Mind.

Ever since Aristotle spoke of humans as the "rational animal," we've had a picture of ourselves as rational beings that are hampered by shortcomings like anger, fear, and confirmation bias.

Cognitive science says just the opposite. Cognitive science shows us that humans just are a collection of messy little modules like anger and fear and the modules that produce confirmation bias. We have a few modules for processing logic and probability and rational goal-pursuit, but they are slow, energy-expensive, and rarely used.

...all animals are under stringent selection pressure to be as stupid as they can get away with.[7]

Or, as philosopher David Hull put it:

The rule that human beings seem to follow is to engage [rational thought] only when all else fails — and usually not even then.[8]

So how does human reasoning work, and why does it so often produce mistaken judgments and decisions?

Type 1 processes provide judgments quickly, but these judgments are often wrong, and can be overridden by corrective Type 2 processes.

Type 2 processes are computationally expensive, and thus humans are 'cognitive misers'. This means that we (1) default to Type 1 processes whenever possible, and (2) when we must use Type 2 processes, we use the least expensive kinds of Type 2 processes, those with a 'focal bias' — a disposition to reason from the simplest model available instead of considering all the relevant factors. Hence, we are subject to confirmation bias (our cognition is focused on what we already believe) and other biases.

So, cognitive miserliness can cause three types of thinking errors:

But the problem gets worse. If someone is going to override Type 1 processes with Type 2 processes, then she also needs the right content available with which to do the overriding. For example, she may need to override a biased intuitive judgment with a correct application of probability theory, or a correct application of deductive logic. Such tools are called 'mindware'.[9]

Thus, thinking can also go wrong if there is a 'mindware gap' — that is, if an agent lacks crucial mindware like probability theory.

Finally, thinking can go wrong due to 'contaminated mindware' — mindware that exists but is wrong. For example, an agent may have the naive belief that they know their own minds quite well, which is false. Such mistaken mindware can lead to mistaken judgments.

Given this understanding, a taxonomy of thinking errors could begin like this:[10] 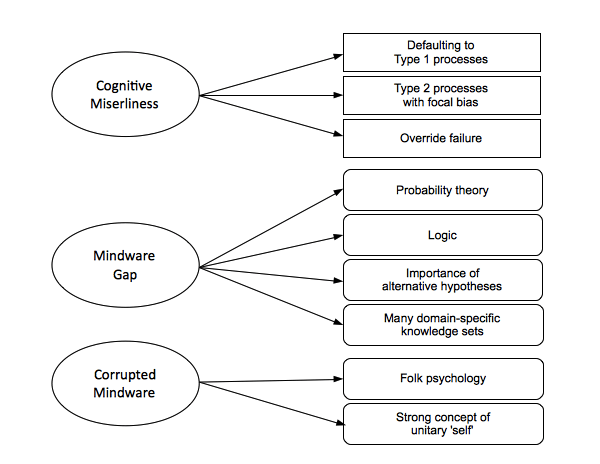 The circles on the left capture the three normal sources of thinking errors. The three rectangles to the right of 'Cognitive Miserliness' capture the three categories of error that can be caused by cognitive miserliness. The rounded rectangles to the right of 'Mindware Gap' and 'Corrupted Mindware' propose some examples of (1) mindware that, if missing, can cause a mindware gap, and (2) common contaminated mindware.

The process for solving a reasoning task, then, may look something like this:[11] 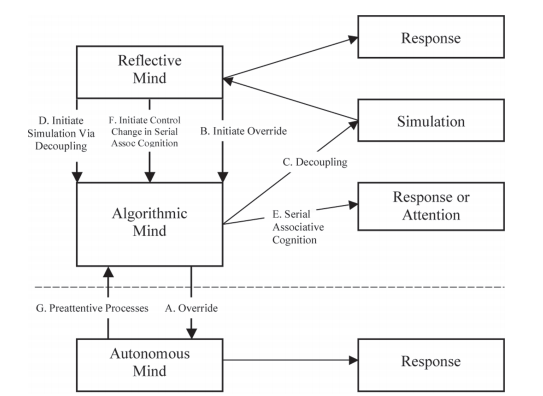 That may be something like how our brains determine how to solve a reasoning task.

If this is right, then we may talk of three different 'minds' at work in solving reasoning problems:

But it is not enough to understand how the human brain produces thinking errors. We also must find ways to meliorate the problem if we want to have more accurate beliefs and more efficiently achieve our goals. As Milkman et al. (2010) say:

...the time has come to move the study of biases in judgment and decision making beyond description and toward the development of improvement strategies.

To jointly achieve epistemic and instrumental rationality, a person must display judicious decision making, adequate behavioral regulation, wise goal prioritization, sufficient thoughtfulness, and proper evidence calibration. For example, epistemic rationality — beliefs that are properly matched to the world — requires probabilistic reasoning and the ability to calibrate theories to evidence. Instrumental rationality — maximizing goal fulfillment — requires adherence to all of the axioms of rational choice. People fail to fulfill the many different strictures of rational thought because they are cognitive misers, because they lack critical mindware, and because they have acquired contaminated mindware. These errors can be prevented by acquiring the mindware of rational thought and the thinking dispositions that prevent the overuse of the strategies of the cognitive miser.

This is the project of 'debiasing' ourselves[14] with 'ameliorative psychology'.[15]

What we want is a Rationality Toolkit: a set of skills and techniques that can be used to overcome and correct the errors of our primate brains so we can form more accurate beliefs and make better decisions.

Our goal is not unlike Carl Sagan's 'Baloney Detection Kit', but the tools in our Rationality Toolkit will be more specific and better grounded in the cognitive science of rationality.

I mentioned some examples of debiasing interventions that have been tested by experimental psychologists in my post Is Rationality Teachable? I'll start with those, then add a few techniques for ameliorating the planning fallacy, and we've got the beginnings of our Rationality Toolkit:

But this is only the start. We need more rationality skills, and we need step-by-step instructions for how to teach them and how to implement them at the 5-second level.

Arkes & Hutzel (2000). The role of probability of success estimates in the sunk cost effect. Journal of Behavioral Decision Making, 13: 295-306.

Clarkson, Emby, & Watt (2002). Debiasing the effect of outcome knowledge: the role of instructions in an audit litigation setting. Auditing: A Journal of Practice and Theory, 21: 1–14.

Deary (2000). Looking down on human intelligence: From psychometrics to the brain. Oxford University Press.

Elqayam & Evans (2011). Subtracting 'ought' from 'is': Descriptivism versus normativism in the study of human thinking. Brain and Behavioral Sciences.

Fetherstonhaugh, Slovic, Johnson, & Friedrich (1997). Insensitivity to the value of human life: A study of psychophysical numbing. Journal of Risk and Uncertainty, 14: 238-300.

Hull (2000). Science and selection: Essays on biological evolution and the philosophy of science. Cambridge University Press.

Kogut & Ritov (2005b). The singularity effect of identified victims in separate and joint evaluations. Organizational Behavior and Human Decision Processes, 97: 106–116.

Kruger & Evans (2004). If you don’t want to be late, enumerate: Unpacking reduces the planning fallacy. Journal of Experimental Social Psychology, 40: 586–598.

Manktelow (2004). Reasoning and rationality: The pure and the practical. In Manktelow & Chung (eds.), Psychology of reasoning: Theoretical and historical perspectives (pp. 157–177). Psychology Press.

Oreg & Bayazit. Prone to Bias: Development of a Bias Taxonomy From an Individual Differences Perspective. Review of General Psychology, 3: 175-193.

Over (2004). Rationality and the normative/descriptive distinction. In Koehler & Harvey (eds.), Blackwell handbook of judgment and decision making (pp. 3–18). Blackwell Publishing.

Peetz, Buehler & Wilson (2010). Planning for the near and distant future: How does temporal distance affect task completion predictions? Journal of Experimental Social Psychology, 46: 709-720.

Pezzo, Litman, & Pezzo (2006). On the distinction between yuppies and hippes: Individual differences in prediction biases for planning future tasks. Personality and Individual Differences, 41: 1359-1371.

Small & Loewenstein (2003). Helping a victim or helping the victim: Altruism and identifiability. Journal of Risk and Uncertainty, 26: 5–16.

Stanovich (1999). Who is rational? Studies of individual differences in reasoning. Erlbaum.

Stanovich & West (2008). On the failure of cognitive ability to predict myside bias and one-sided thinking biases. Thinking and Reasoning, 14: 129–167.

Stanovich, Toplak, & West (2008). The development of rational thought: A taxonomy of heuristics and biases. Advances in Child Development and Behavior, 36: 251-285.

Staw (1976). Knee-deep in the big muddy: a study of escalating commitment to a chosen course of action. Organizational Behavior and Human Performance, 16: 27-44.

Next:
Why "scout mindset" is crucial to good judgment (Julia Galef)
No comments5 points
Log in to save where you left off
New Comment