Estimation of probabilities to get tenure track in academia: baseline and publications during the PhD.

This article aims to estimate the probabilities of any PhD student to get a permanent position (tenure track) in academia, in order to inform career decisions. The findings have been:

The most important factor determining whether you actually get such positions is the number of first-authored articles, although the precise numbers by field are not known in Pure Science or Technological fields. They are nevertheless available in the Biomedical and Sociology fields.

Contributing with a career to one important cause is perhaps one of the most effective ways of having a positive impact in the world. However, since EA careers are not so well established, the few opportunities that are available tend to grab all the attention, and less conventional choices, although celebrated, are often difficult to assess and find.

For instance, I aim to contribute to the AI Safety problem. However, it is not clear what is the best way. In my case I see two main options for next steps:

Some cons of working in academia due to the long time it takes, the low chances of getting tenure, and the perverse incentives to publish a lot no matter how relevant the topic is. On the other hand, working at academia gives a lot of freedom, social status and influence and the possibility of making fields of interest to Effective Altruism (including e.g. AI safety and global priorities research)  more respectable. Some other considerations might be found in CS PhD 80000 hours career profile.

However, one factor not analysed in depth in that profile is the probability of getting a tenure position. In this post we aim to get a first estimate that could inform people.

Just to inform the reader, the typical career path in academia usually involves a PhD (~3 years in Europe, 5 in the US which also includes the master), one or two postdocs of 2-3 years each (this step may be longer, up to 7-8 years), and then obtaining access to junior research fellows, which may be promoted to professorship with time. The most difficult part seems to be changing from the temporary postdoctoral positions to the permanent research fellow one.

Approximate academic career path. The lengths are only estimated based on the comments above, actual timelines vary a lot. Junior researcher is the name I give to the first permanent position.

In order to establish a baseline, the following might be useful:

The data is somewhat confusing and contradictory, probably because I am mixing non-comparable sources. In any case, other minor comments is that in Europe there seem to be higher chances (based on point 4) and that Biology seems harder than Physics and Chemistry 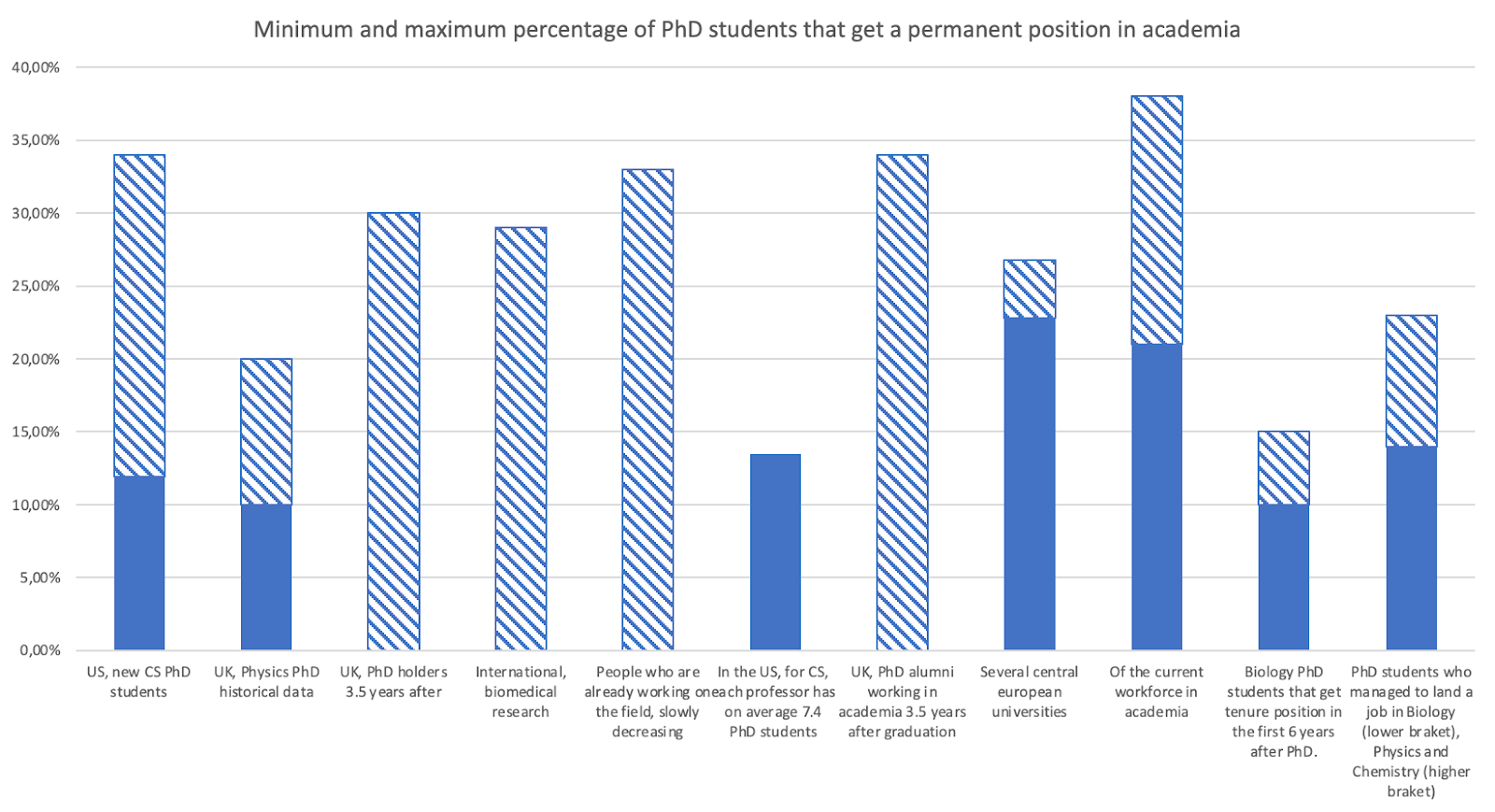 Percentage of PhD students who get a permanent position in academia according to each source above.

Overall, my personal estimate is that I'm 90% sure that 10-30% of students get tenure, and 65% that the intervale is between 10% and 20%. Furthermore, I estimate based on the previous sources that around 70% of the PhD alumni would want to work in academia. Hence, conditional on wanting to work in academia your baseline chances should be in the 15-30% range to start with.

Update: Since I published this article, I have found this report, that decomposes probabilities by field of study in Concordia University, Canada:

Update 2: I have found a second article on 7000 US STEM graduates detailing what percentage of people progress to the next stage, indicating that overall 21% of PhD holders get tenure, and that 24% do in Computer Science. 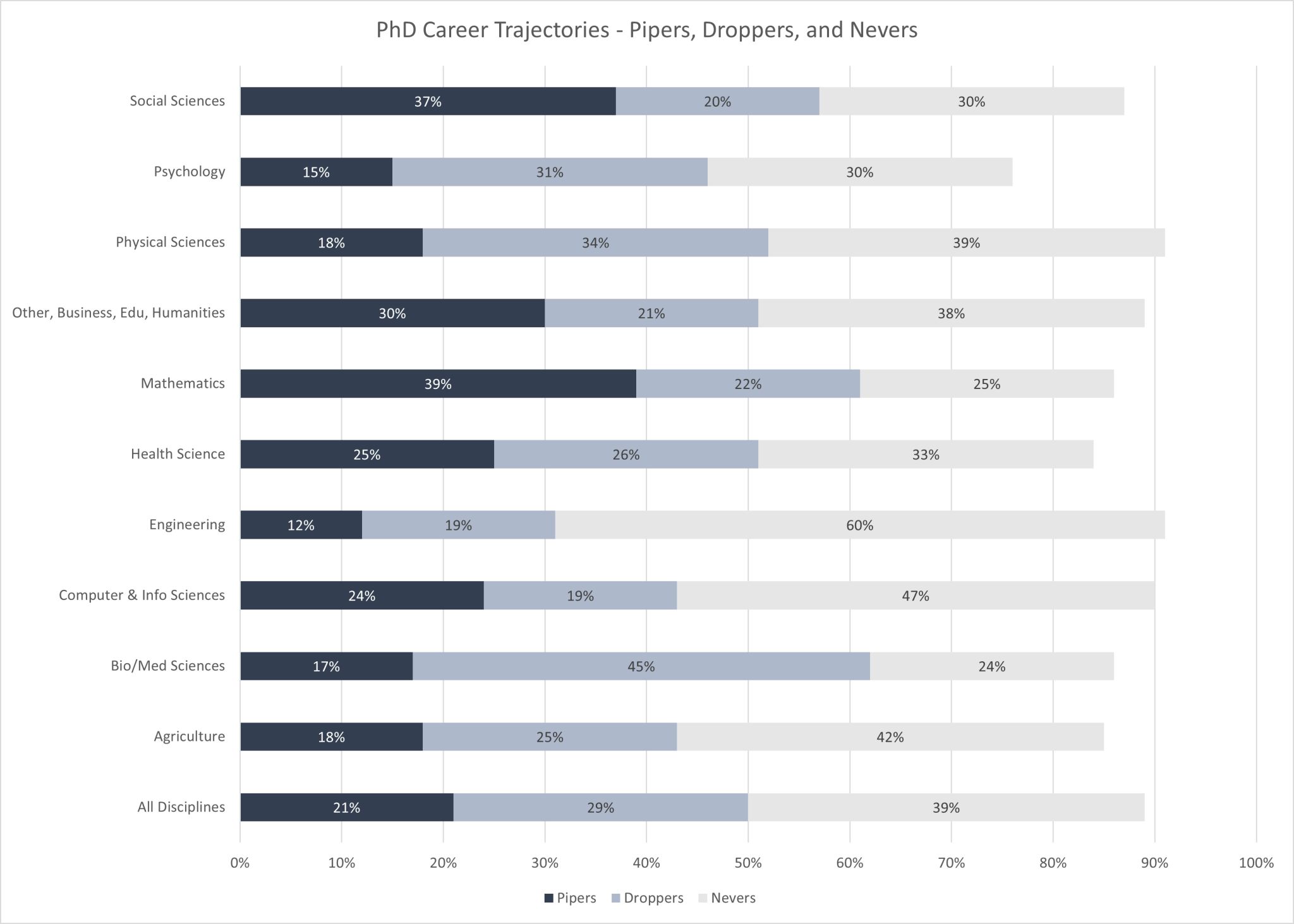 Inside view: the predoctoral publication statistics

Some articles that are important in this respect:

Some conclusions from this section is that publishing and specially first-author publishing is the largest predictor of academic success. What is much harder to find is concrete numbers for particular fields.

I believe that having a more accurate estimate of what are the actual chances of landing a job at academia can help to gauge the pros and cons of this career path.

From the previous sections it is likely (65% chance in my opinion) that the probability baseline probability of landing a permanent job at academia conditional on trying is in the 15-30% range.

However, there is a lack of data on how exactly to use the inside view to gauge personal probabilities. In particular, most studies analysing this have been done for particular fields which may not replicate in others. However, the best estimate seems to be that if you are going this path, the main metric you should be looking at is the number of articles where you are the first author. More research is needed to calibrate estimates based on inside-view factors.

I would like to thank the incredible help of Jaime Sevilla, who provided useful feedback on a draft of this article.

Hey Pablo - thanks for working this up. It's nice to have some baseline estimates!

As you say, Tregellas et al. shows that the probability of tenure varies a lot with the number of first author publications. It would be interesting to know if tenure can be predicted better with other factors like one's institution or h-index - I could imagine such a model performing much better than the baseline.

You're right Ryan, I'll modify the second complicated sentence. I am actually not sure what is the difference between tenure and tenure track, to tell the truth.

However, in one of the documents above I saw that institution is not such a strong predictor (point 4), but h index seemed useful (in point 2 the h-index is discussed).

Interesting. The point 2 article by van Dijk seems decent. Figure 1B says that the impact factor of journals, volume of publications, and cites/h-index are all fairly predictive. University rank gets some independent weighting (among 38 features, as shown in their supplementary Table S1), but not much.

Looks like although the web version has gone offline, the source code of their model is still online!

I strongly agree with Ryan that success is to a relatively large degree predictable, as can be done in the PCA decomposition of point 2 above, figure 1C.
I think it would be very valuable to have such a model, but the current code is only for biology (the impact factor will fail for instance for anything different). If one wanted to fit a model to predict it, it could probably use google scholar and arxiv, but the trickiest part would be to recover the position of those people (the target), which may partially be done using google scholar.

I just posted another article I found on average publication rates in Norway for different positions, ages, fields and gender.

This is helpful, thanks.

The information is probably here somewhere, but is that the probability of getting tenure given you finish your Ph.D.? I.e. Does this account for dropping out?

Somewhat tangential, but I think accounting for the chance of working on AI safety (or something comparably effective) outside of academia will help. I think this is more common in Economics (e.g. World Bank). But I guess OpenAI or similar institutions hire CS PhDs and working there possibly has a similar impact to working in academia.

I would say you basically cannot get tenure if you don't get a PhD, so dropouts are not taken into account in any of the previous statistics as far as I understood them. All this metrics are of the kind of: x% of PhD alumni got tenure, or similar.

I actually agree that taking into account the private sector could help, but I am much less certain about the freedom they give you to research those topics, beyond the usual suspects. That was why I was focussing on academia.

In the US, about half of people who start PhD programs get the degree. Also, a big factor that I thought I commented about here (I guess they removed comments) is that most tenure track positions at least in the US are teaching intensive, so there is not much time for research.