We'll be posting results from this survey every day or two, since a few people asked us not to share all of them at once and risk flooding the frontpage. You can see the full set of results at our sequence.

This post is part of a series on Open Phil’s 2020 survey of a subset of people doing (or interested in) longtermist priority work. See the first post for an introduction and a discussion of the high-level takeaways from this survey. A previous post discussed the survey’s methodology. This post will present some background statistics on our respondent pool, including what cause areas and/or roles our respondents were working in or seemed likely to be working in.

We put respondents into rough buckets based on what type of work they seemed likely to shoot for in the medium term, according to our prior knowledge about them and their response to a survey question on career plans. This is just one of many possible bucketings. 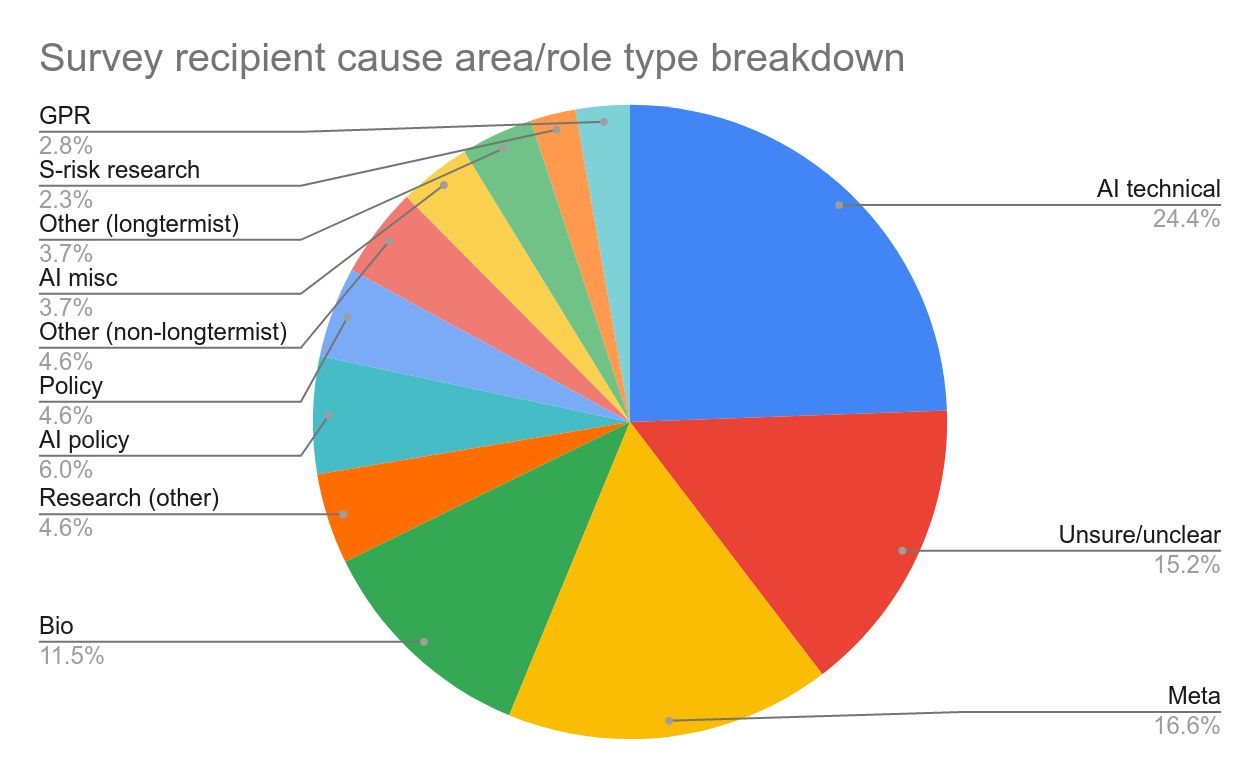 Notes on these buckets:

We asked our respondents various questions about their educational backgrounds, starting with a question about the highest level of education they have completed or were in the process of completing. 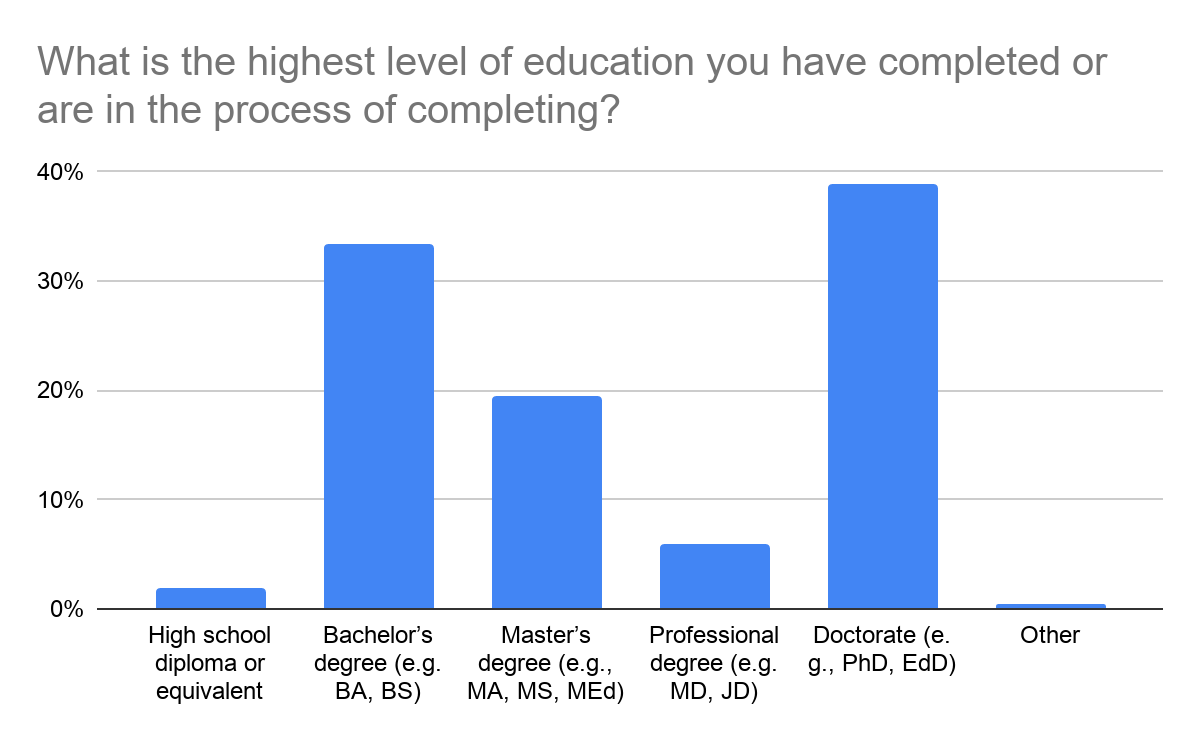 39% of our respondents reported that they held or were in the process of completing a doctorate. 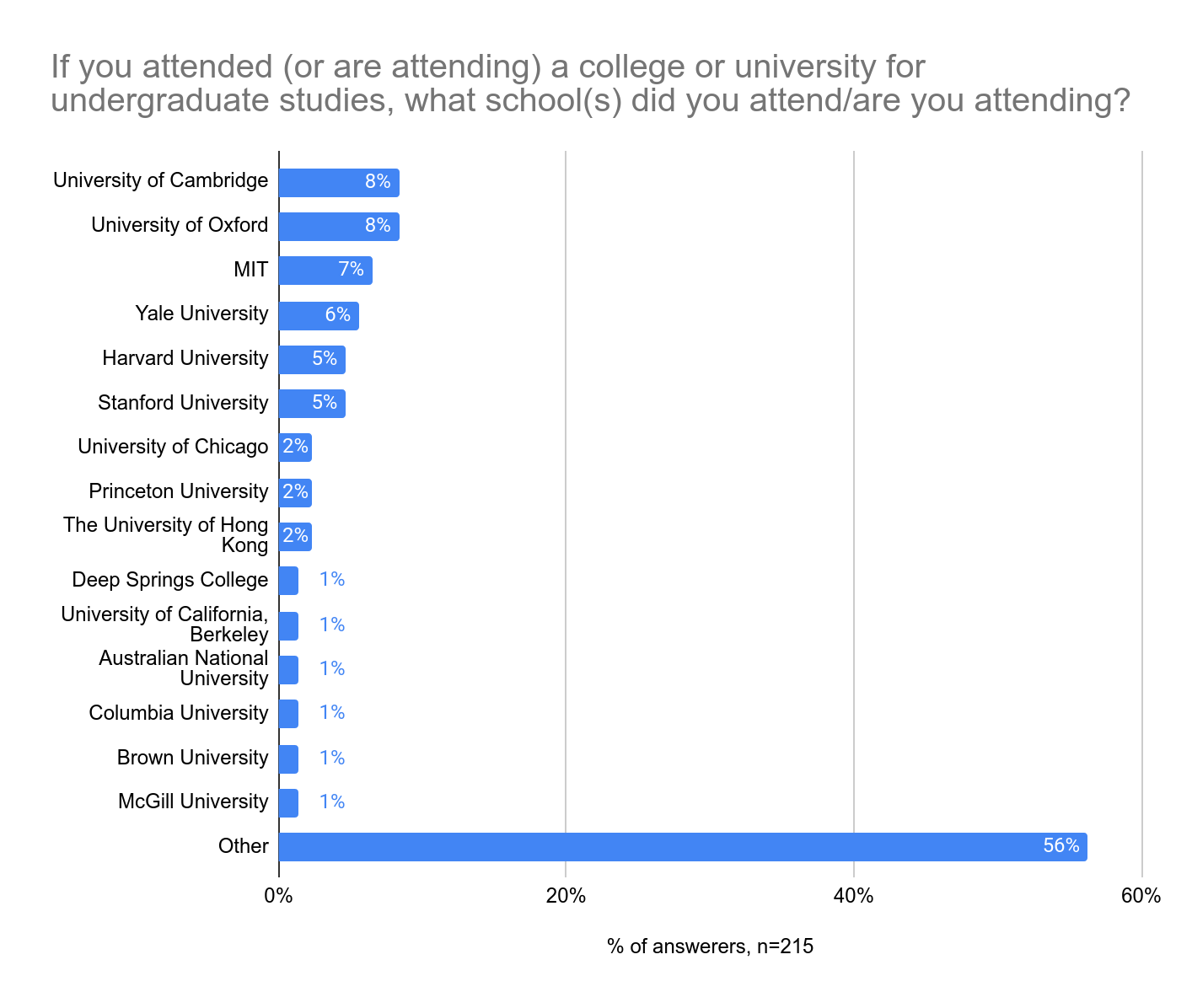 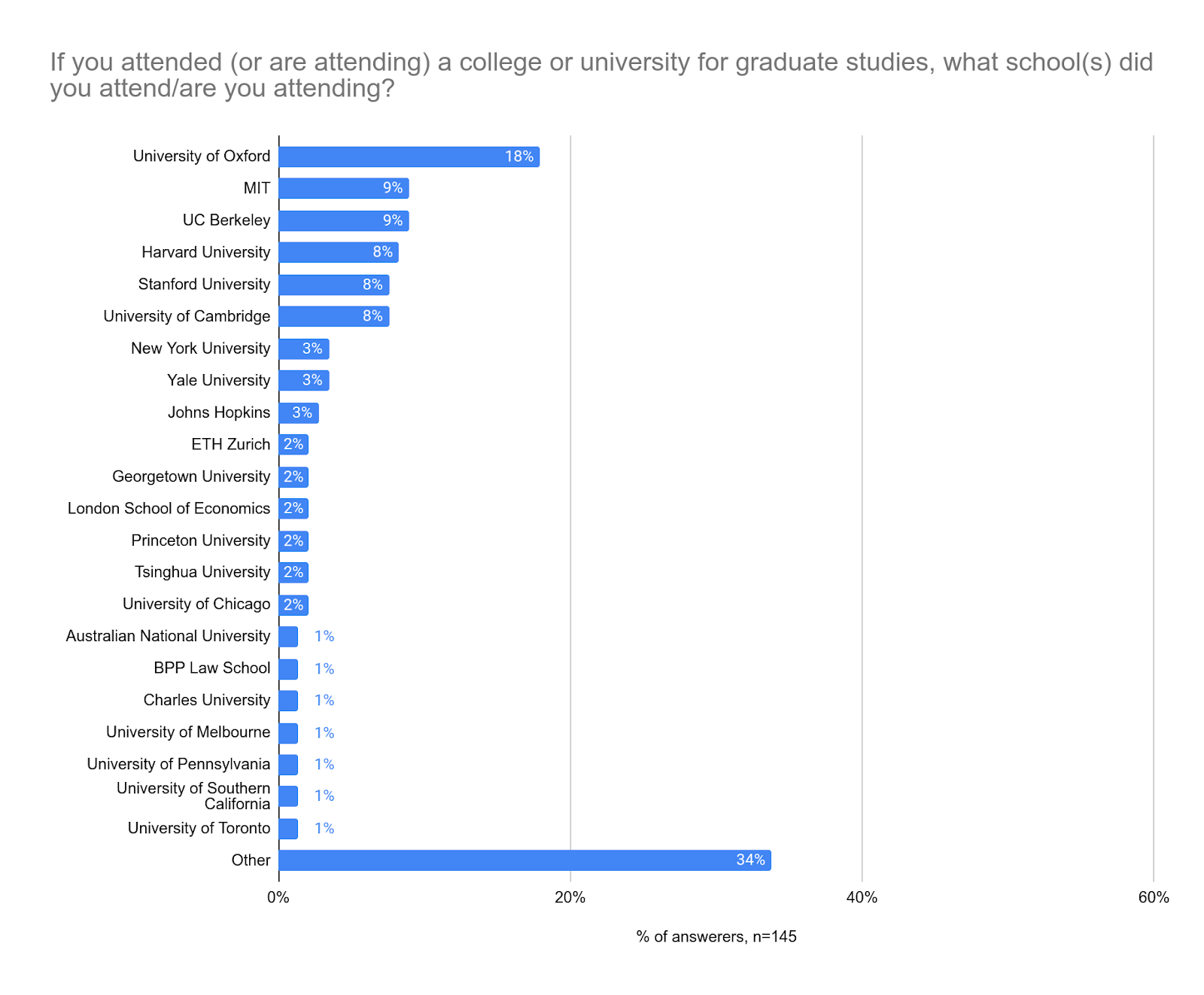 Note that Oxford’s popularity for graduate studies among our respondents is likely influenced by the fact that FHI and GPI are housed there.

61% of our respondents had studied or were studying (undergraduate or graduate) at one of the top 15 universities in the world, according to this list[1]. When counting by weight rather than by raw number, the figure is similar. The corresponding undergrad-only figures were both 44%[2].

68% of our respondents by raw number, and 75% by weight, reported studying or having studied a STEM subject at either the undergraduate or graduate level. (This is according to a definition of STEM which includes biology, engineering, and computer science, but not economics.) This looks similar-to-slightly-greater-than the results from the 2019 EA Survey, which gives between 60% and 70% for people studying STEM (depending how their “Other Sciences” category further breaks down).

From my very shallow (10 minutes) of research on this question, both our and the EA Survey’s respondents look substantially more STEM-y than elite US college students in general; Harvard University undergraduates were ~45% STEM majors in 2015 (source).

It’s interesting to note that the numbers of respondents who did their undergrads at MIT and at Oxford/Cambridge are similar (7% for MIT, 8% for both Oxford and Cambridge), despite the fact that the total number of undergrads at these universities differ by a factor of three. MIT had just ~4,500 undergraduates in 2019, while Oxford and Cambridge each had about ~12,000. This means that the rate of being a survey respondent is ~2x higher for MIT undergrads than for Oxbridge undergrads. Yale has a rate similar to MIT’s, while Harvard and Stanford have rates similar to Oxbridge’s.

The 2019 EA Survey’s analysis of where its respondents went to undergrad has Oxford and Cambridge much further in the lead. Presumably this difference is somehow caused by our selectivity, who we happen to know, and/or by our focus on longtermists, since those are the main differences between the two respondent pools. But I’m not sure what the mechanism is. 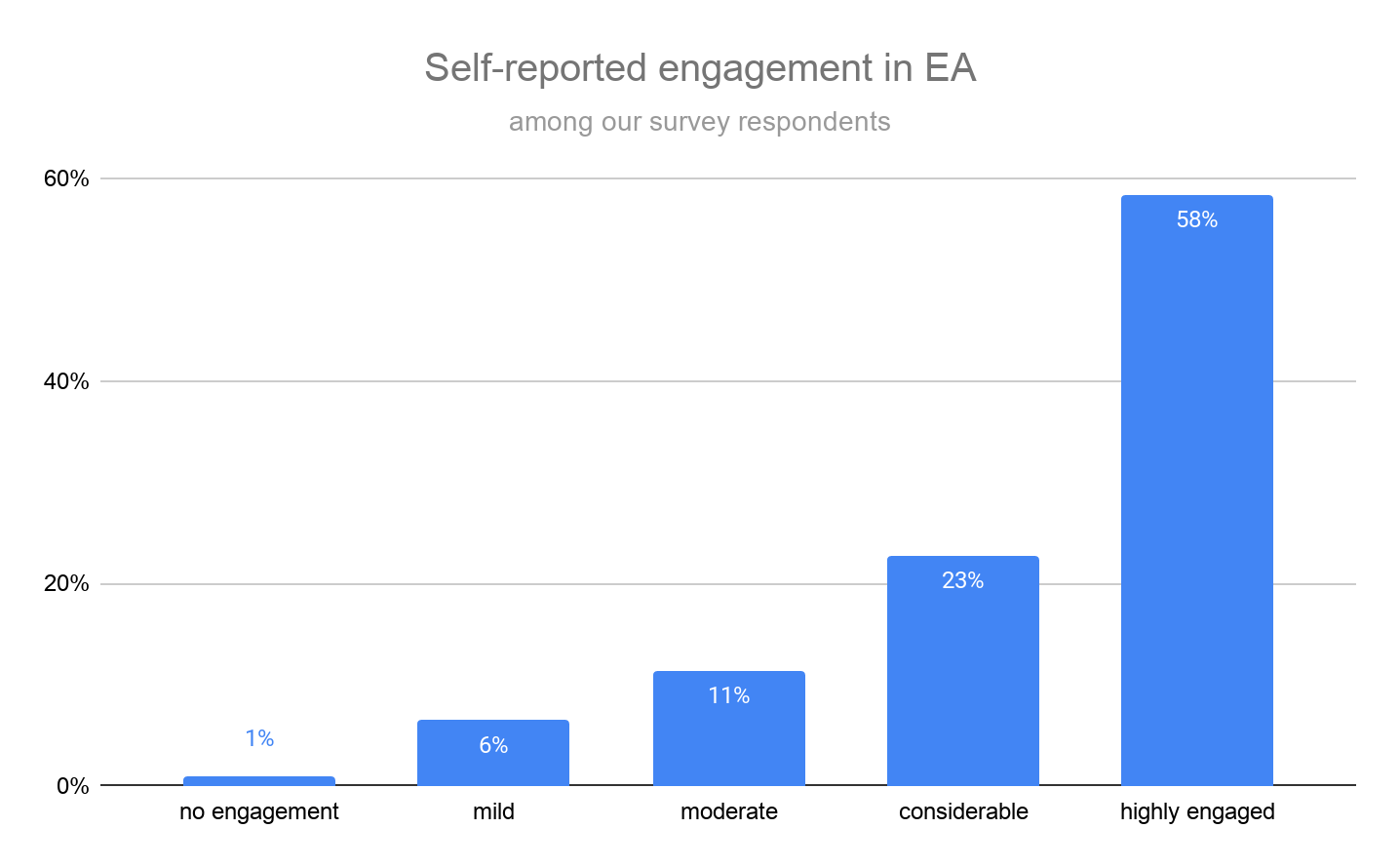 The wording of the question and response options was identical to what was used in the 2020 EA Survey — we synchronized these to allow for an apples-to-apples comparison of the results. Around 7% of people did not give an answer for this question.

Here is the equivalent graph from the 2020 EA Survey for comparison. 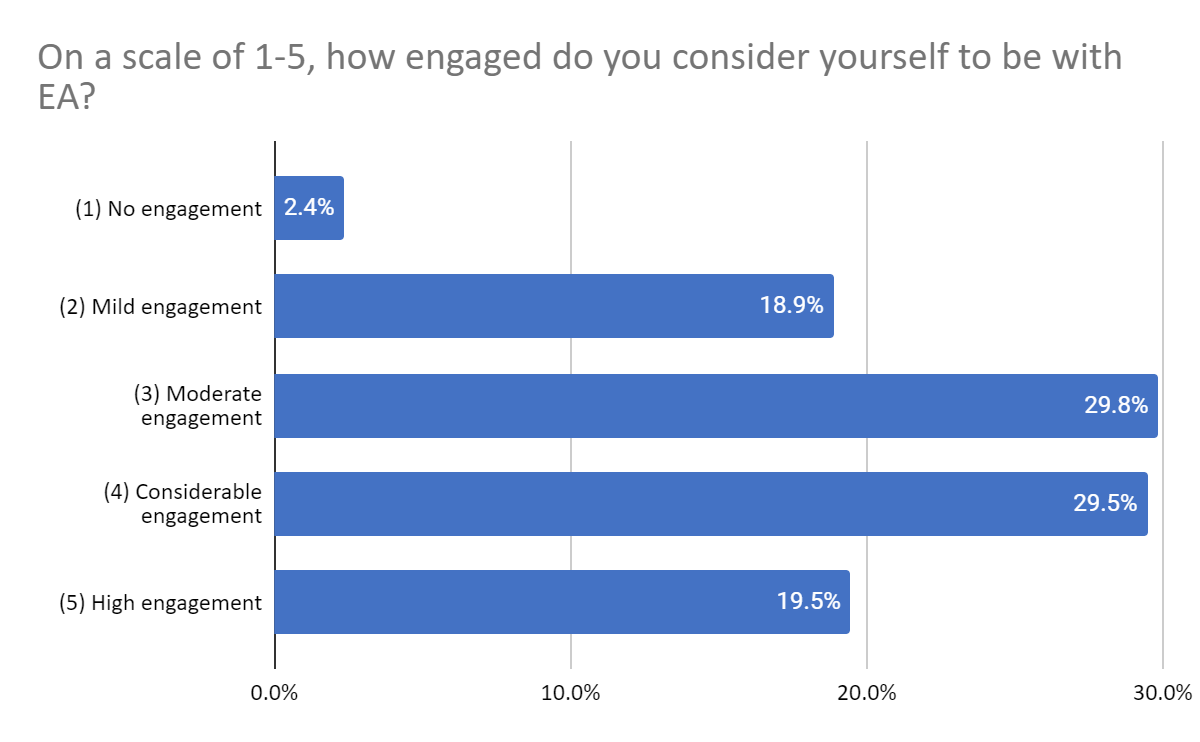 Our respondents are much more engaged, which makes sense, because our selection process selected for more engaged people.

To come up with a list of “top 15 world universities” for the purposes of this analysis, we averaged the QS rankings for 2019 and THE rankings for 2020. Here is our list. 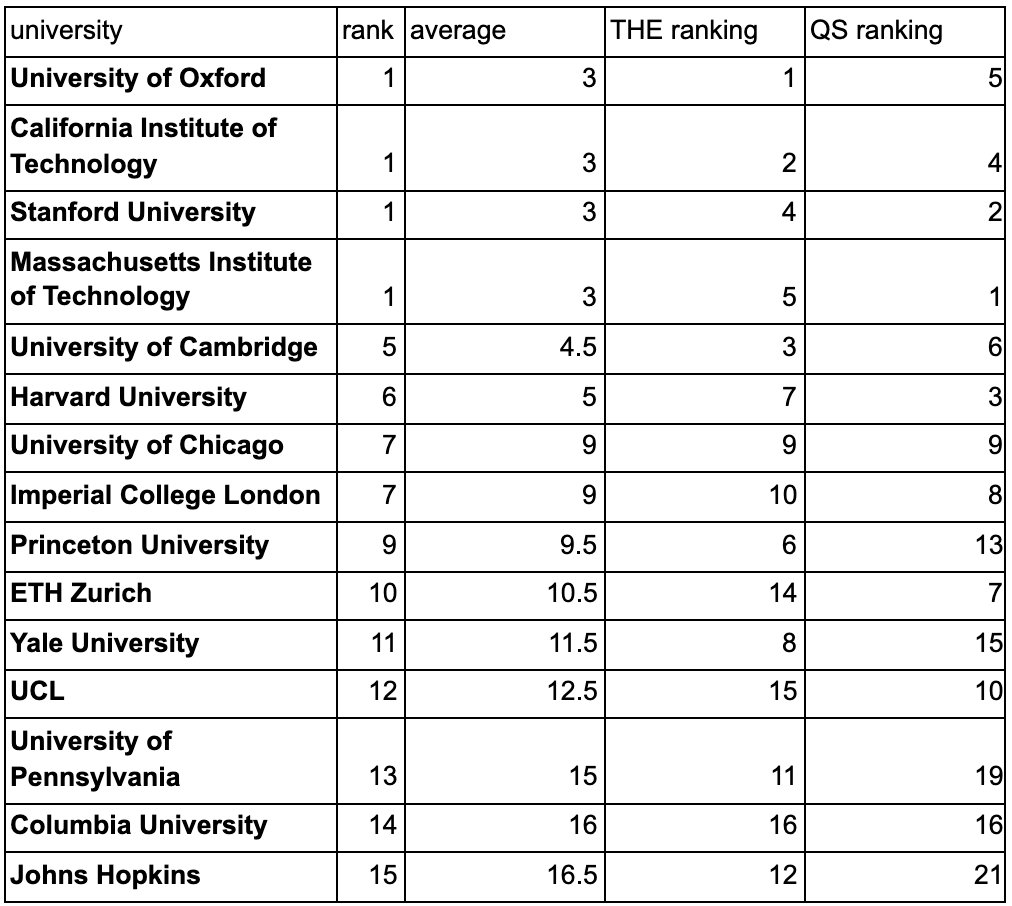 These rankings don’t include institutions like liberal arts colleges that offer only an undergrad degree program, so our list is missing them.