This post is the last in a series on Open Phil’s 2020 survey of a subset of people doing (or interested in) longtermist priority work. See the first post for an introduction and a discussion of the high-level takeaways from this survey. Previous posts discussed the survey’s methodology, background statistics about our respondent pool, our findings on what helped and hindered our respondents re: their positive impact on the world, our findings on impact from EA groups specifically, and our findings about when and how our respondents first learned about EA/EA-adjacent ideas. This post discusses miscellaneous other findings that we thought were important.

Satisfaction with the EA Community

We asked about our respondents’ satisfaction with the EA community (focusing specifically on that community, as opposed to adjacent ones.)

The possible responses were on a numeric scale: 1 through 10. ~90% of our respondents answered this question. Here’s the distribution of responses. 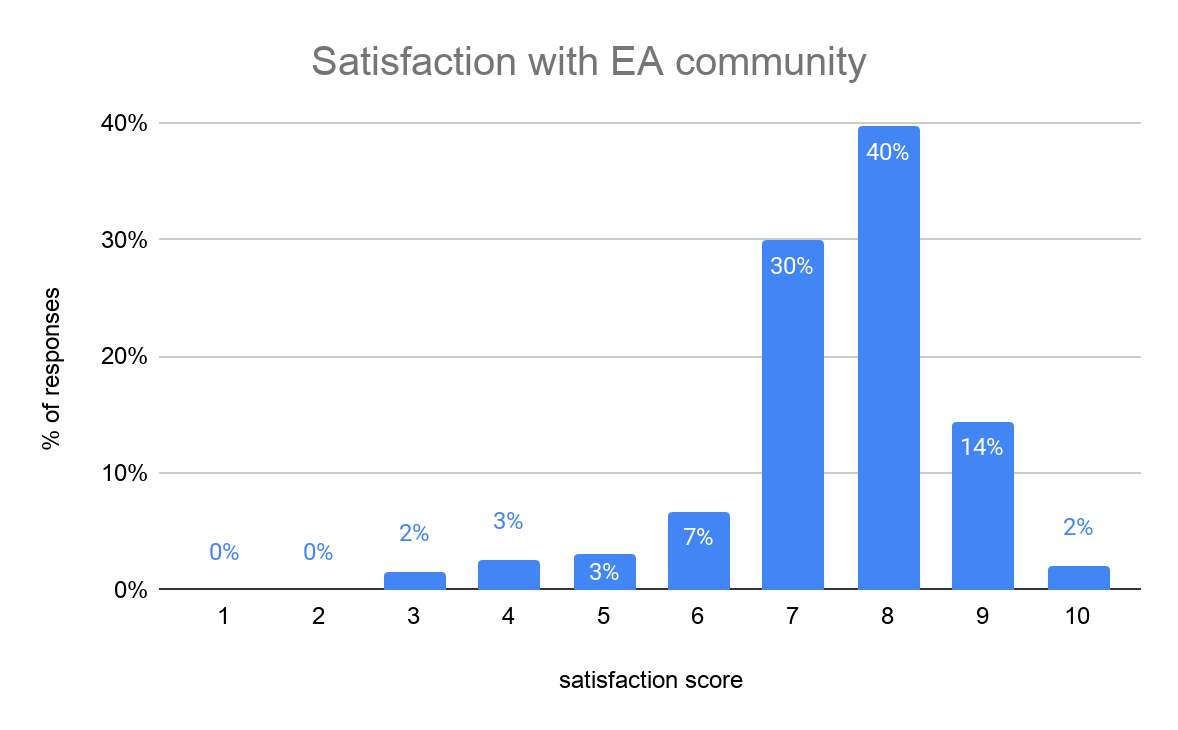 The mean of this distribution is ~7.5.

What do you think would have been the best age for you to hear about EA or EA-adjacent ideas, and why? (For whatever you take “best” to mean.)

The results had the following distribution. 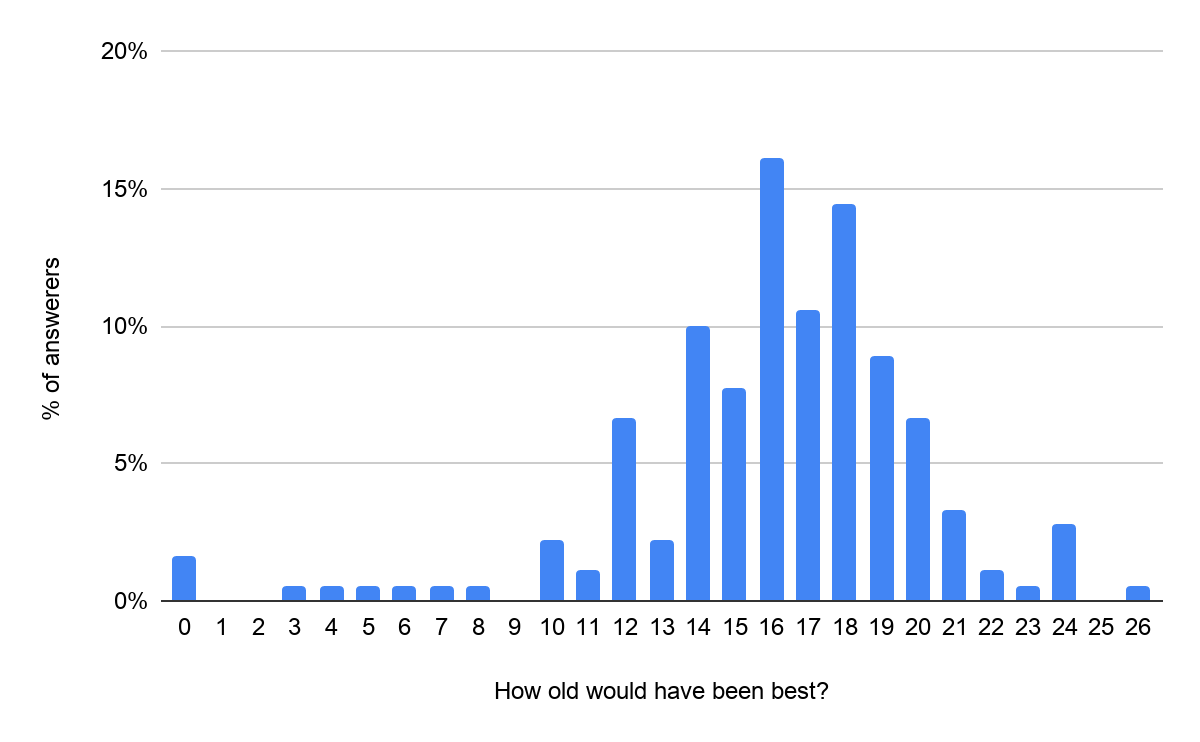 Many respondents expressed that they wish they had known about EA before university, since it would have affected their decisions about what to study. Some people expressed a wish to have done their “soul-searching” before they entered university, so they could better use their time there. Some respondents who said that ages before 16 would have been ideal for them mentioned that at these ages they were already very interested in ethics and intellectual approaches to altruism, and they wished that EA had been around for that stage of their thought. A few of these people specifically mentioned being dissatisfied with the impact they saw “conventionally altruistic” activities as having at this age.

You might distrust this self-report evidence for a number of reasons; you might think our respondents have a (possibly unconscious) desire to present themselves as “ideal EAs” who were always sympathetic to the ideas, or you might think that they suffer from a “curse of knowledge”-like effect where they remember their former selves as having beliefs more consistent with their present beliefs than was actually the case. For me, after accounting for these biases, the self-reports still felt like a meaningful update about the promisingness of high-school outreach[1].

We asked our respondents directly how to attract people like them. In an attempt to get answers that were grounded in direct experience, we used a framing where we asked about “people very, very similar to you.”

Imagine that there’s a pool of other people who are very, very similar to you (with similar backgrounds, skills, interests, and personalities) who haven’t yet engaged with EA/EA-adjacent ideas. What advice would you give a person or organization who hoped to get more of those people to become involved in working on top-priority causes? If Open Phil were interested in making grants with the goal of getting more of those people involved, what advice would you give to us?

126/217 = ~58% of our respondents answered this question (it was in the optional section). My first takeaway from these responses was that they were very diverse; there’s no one intervention that everyone is screaming for. Some themes that jumped out at me:

We also (later) asked a multiple-choice question on “outreach efforts applicable to you personally” which gave a paragraph of description on each of several different hypothetical outreach efforts and asked respondents to select which ones they think would have been especially useful to them. The text of the question is below (it’s quite long).

Below are descriptions of several interventions/programs that have been proposed. After you read through the descriptions, we’ll ask you which, if any, seem like they would be or in the past would have been very useful to you personally, in terms of substantially increasing your expected lifetime positive impact, if implemented reasonably-but-not-implausibly well, and what versions, if any, would have been especially useful.

Structured education on EA and EA-adjacent ideas: I.e. programs to systematically teach people about EA, longtermism, and/or related ideas, as well as associated research techniques. This could include the technical/empirical aspects of these areas (e.g. things like “arguments about why transformative AI might happen soon” and “results of research on human biases that might affect career choice”) as well as philosophical (e.g. “introduction to population ethics and how that affects estimates of the moral value of the far future” and “arguments for and against digital minds being morally relevant”). The programs could be either short (a 4-day workshop) or long (a semester-long “course”), online or in-person, focused on relatively introductory or more advanced content, and focused on either broader or more specific content.

Outreach — more online content targeted at people in their teens or early twenties: This might include blogs, articles, advertising, or videos, aimed at increasing the odds people become engaged earlier, and that more people become engaged in total (rather than helping already-engaged people deepen their engagement).

Social events: A greater variety and frequency of opportunities to interact socially with other people pursuing longtermist priority work, for example at meetups, events, parties, or one-on-one, with the aim of making it easier to make friends with others pursuing those aims, and increasing the social interconnectedness of the community.

Meetings with a mentor: People who are newer to the relevant communities and ideas get assigned to be mentored by people with more experience via a matching process aimed at facilitating helpful mentorship relationships, and increasing the odds that the newer people get a chance to benefit from the support, advice, and connections that others might have. The mentor would not be deeply involved in the newer person’s projects, but would be available to meet regularly to provide support and advice.

Scholarships/early financial support: Efforts to provide people who seek to work on projects in priority cause areas with more/earlier financial support. This could include funding for students (merit- or need-based), or for people who are working independently, trying to start new projects, or think supplementary financial support in addition to income they earn doing their projects would be useful.

Dedicated resources for starting new projects: This category includes various forms of support dedicated specifically to people trying to start new projects, orgs, and other initiatives. Specific examples include (a) access to common resources needed for starting new projects/orgs like legal advice, fiscal sponsorship, etc. (b) sets of ideas from more experienced people in relevant areas about what projects/orgs seem most useful, (c) a point person for questions about unilateralism and ways projects could potentially be harmful, for the purpose of avoiding doing harm and showing the rest of the community one is sensitive to these harms, (d) social resources like a dedicated discussion space for people trying to start new projects, access to lists of potential co-founders and early employees, etc.

Intensive coaching/self-help/reasoning skills: In contrast to the “structured education” option, this one focuses on helping people learn and practice meta-skills related to thinking and emotion, like thinking about the opportunity cost of one’s choices, recognizing and addressing motivated reasoning, and generally increasing self-efficacy/agency. The focus would be on learning these skills in order to increase positive impact on the world. This could also include more dedicated support for brainstorming ways to address obstacles, reflect on personal fit, and trying out strategies to increase productivity. CFAR workshops and EA coaching are examples of efforts in this category.

Other: [as described by you]

Which of these seem like they would have been very useful to you personally?

And a follow-up question:

Of the ones which seem like they would have been very useful, which versions of them seem most helpful?

Selecting multiple options was allowed. 64% of our respondents answered one or more options for this question (it was in the optional section). Here is the distribution of results: