This post is part of a series on Open Phil’s 2020 survey of a subset of people doing (or interested in) longtermist priority work. See the first post for an introduction and a discussion of the high-level takeaways from this survey. Previous posts discussed the survey’s methodology, background statistics about our respondent pool, our findings on what helped and hindered our respondents’ positive impact on the world, and our findings on impact from EA groups specifically. This post discusses results about how and when our respondents first came into contact with EA, rationalist, etc. ideas.

We asked about our respondents' “origin stories,” as well as specifically how they first learned about EA/EA-adjacent ideas.

Briefly (in 1-2 paragraphs), how did you come to be a person who pursues or might potentially pursue longtermist priority work? What is your “origin story”? (You'll get more opportunities to elaborate on this later in this section.)

Tell us about how you first learned about EA/EA-adjacent ideas. (No need to repeat anything you’ve already said in a previous part of the survey.)

I then went through each respondent’s answers to these questions, with the intent of categorizing our respondents by how they first learned about each of these ideas.

It would have been convenient to be able to put everyone in just one category, but some of our respondents didn’t fit neatly into just one category. So I tagged respondents as having been exposed to EA/EA-adjacent ideas with up to three tags, though most people got only one tag. Here is the distribution, showing each tag by how many respondents it applied to. 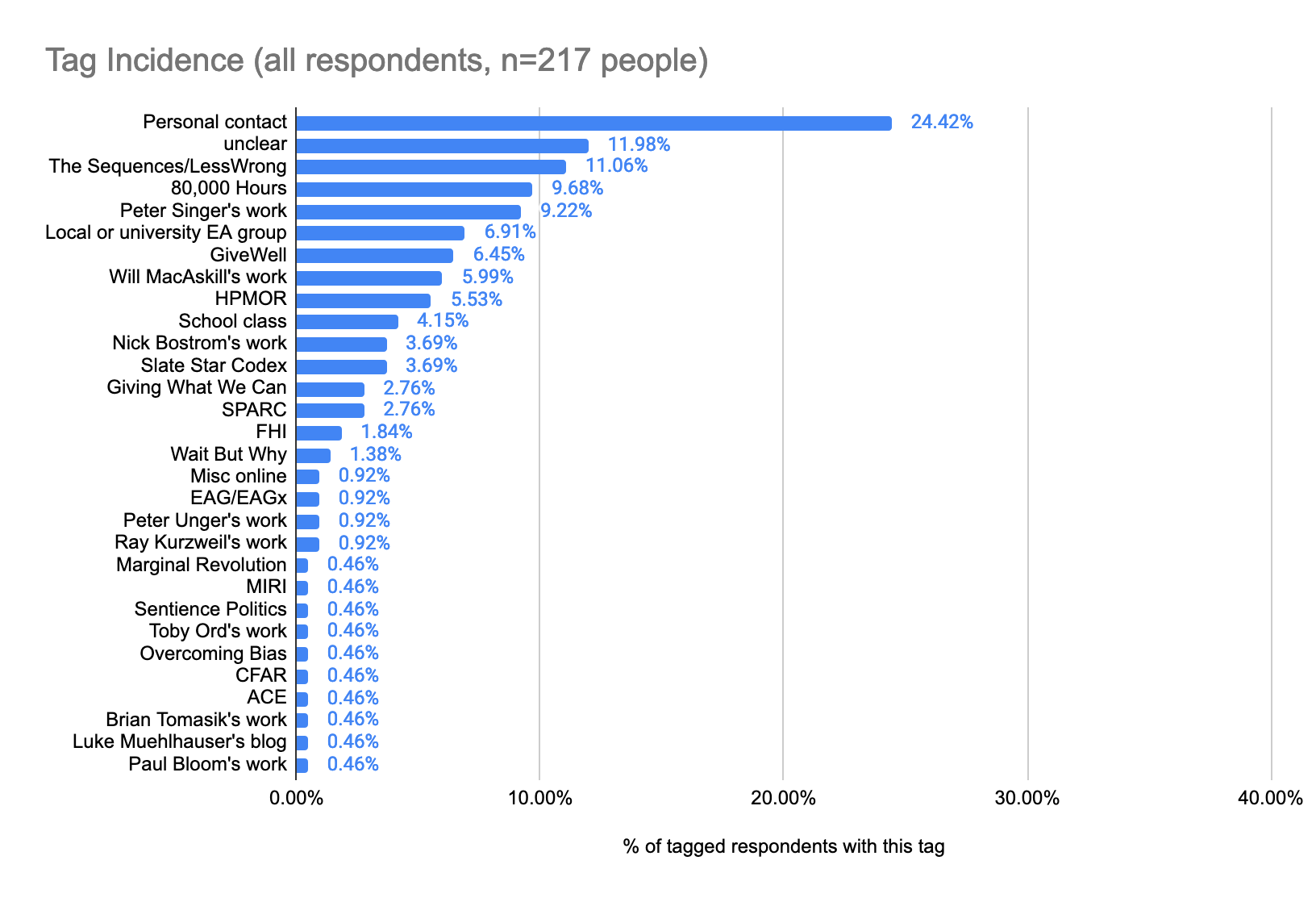 The “EA-adjacent ideas” here were most often rationality and Bostromian x-risk, and occasionally futurism/transhumanism, e.g. Kurzweil.

I applied multiple tags in about 15% of cases. These were situations where the respondent either didn’t remember or didn’t clarify which of several sources was their first exposure, or they described independently encountering multiple sources of EA/EA-adjacent ideas at around the same time — for example, reading Superintelligence and separately encountering 80,000 Hours’ website. In the second case, I only applied multiple tags if I was pretty sure the sources were actually independent.

Most respondents answered these questions. Those who didn’t, or who did but didn’t provide enough information for me to make a judgment, got an “unclear” rating.

Some notes on the tags: 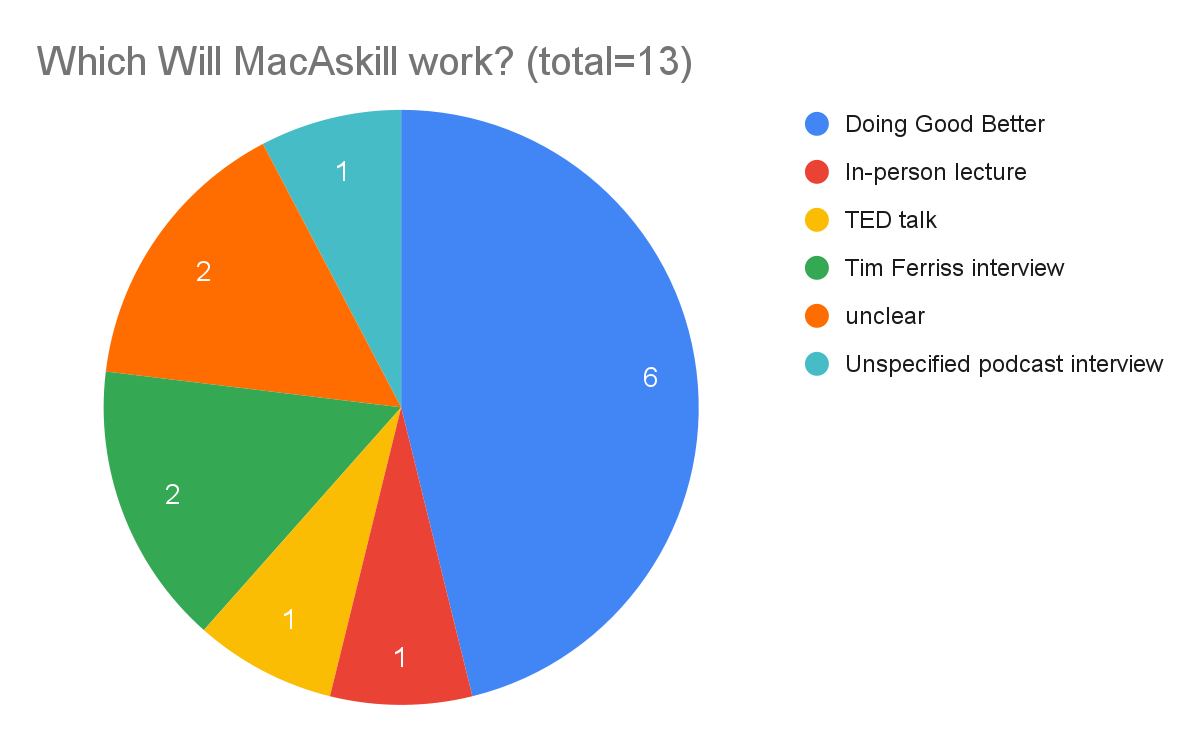 It’s interesting that podcast interviews were about half as many respondents’ first exposure as Doing Good Better, but the low sample size makes this weak evidence of anything.

Wait But Why seems surprisingly effective at introducing folks to EA/EA-adjacent ideas; e.g. half as many people give it credit for introducing them as give credit to Giving What We Can.

“School class” being more popular than Slate Star Codex or Nick Bostrom’s work was also a surprise to me.

Comparison to the 2020 EA Survey

Here’s the equivalent chart from the 2020 EA Survey. (Note that theirs is a multiple-choice question, and did not allow multiple answers — so their percentages sum to 100%, while ours do not.) 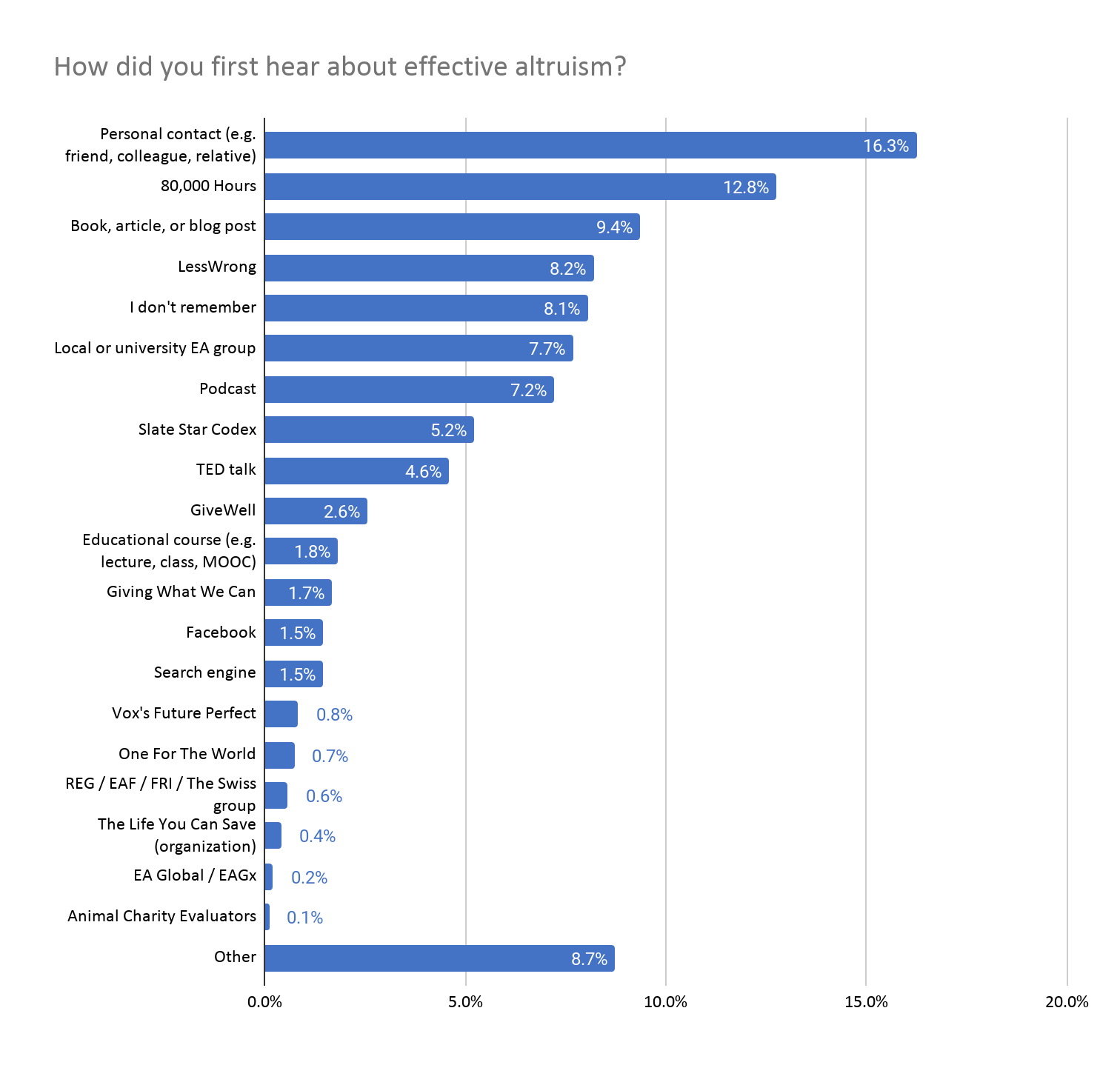 Doing a quick eyeball of the two charts, they look pretty similar insofar as they’re comparable. “Peter Singer’s work” doesn’t appear, but it’s because they didn’t have that category — that would fall under “Book, article, or blog post” or “TED talk.” “Personal contact” leads in both, though by somewhat more in ours. A somewhat larger percentage of our respondents came from LessWrong and from HPMOR (not a category on the 2020 EA Survey, but free-text analysis shows that it appears as part of their LessWrong category).

One clear difference is that only about 2% of our respondents mention being introduced via podcasts, while ~7% of the 2020 EA Survey respondents do. I think this is due to our survey having a sampling bias against people who got into EA/EA-adjacent ideas very recently, as described in here (while the 2020 EA Survey has less of that bias). Only 3% of EA Survey respondents who got involved before 2017 say they were first exposed via a podcast. There was a huge uptick in people getting exposed to EA via podcasts in 2020, which seems to have been driven mostly by Sam Harris’s podcast[2]; also, the 80k podcast started in 2017, though the EA Survey doesn’t record many people saying they first heard of EA that way.

Did This Exposure Involve Another Person?

Separately from the “personal contact” tag (see above), I tracked yes/no for whether the exposure involved a personal contact (as in a 1:1 relationship, such as one with a friend, not counting e.g. a workshop) in any way, vs. being entirely self-directed. 36% of the cases (79/217) seemed to involve a personal contact in this way.

Were There Two Independent Exposures to Different Clusters of EA/EA-adjacent Ideas?

As I looked through the data, I was interested to see people remark that they had encountered e.g. LessWrong and GiveWell separately and independently, only later discovering any connection between the two. Out of curiosity, I went back and tracked yes/no for whether people discovered two clusters independently as well. 6% of the cases (13/217) described something like this, though we were not really asking questions about it, so I’d guess this is much lower than the real incidence. The two different clusters were often rationality and EA, or Bostrom and EA.

We asked our respondents how old they were when they first learned about EA/EA-adjacent ideas.

How old were you when you first learned about EA/EA-adjacent ideas?

90% of our respondents answered this question. The distribution of responses is below. 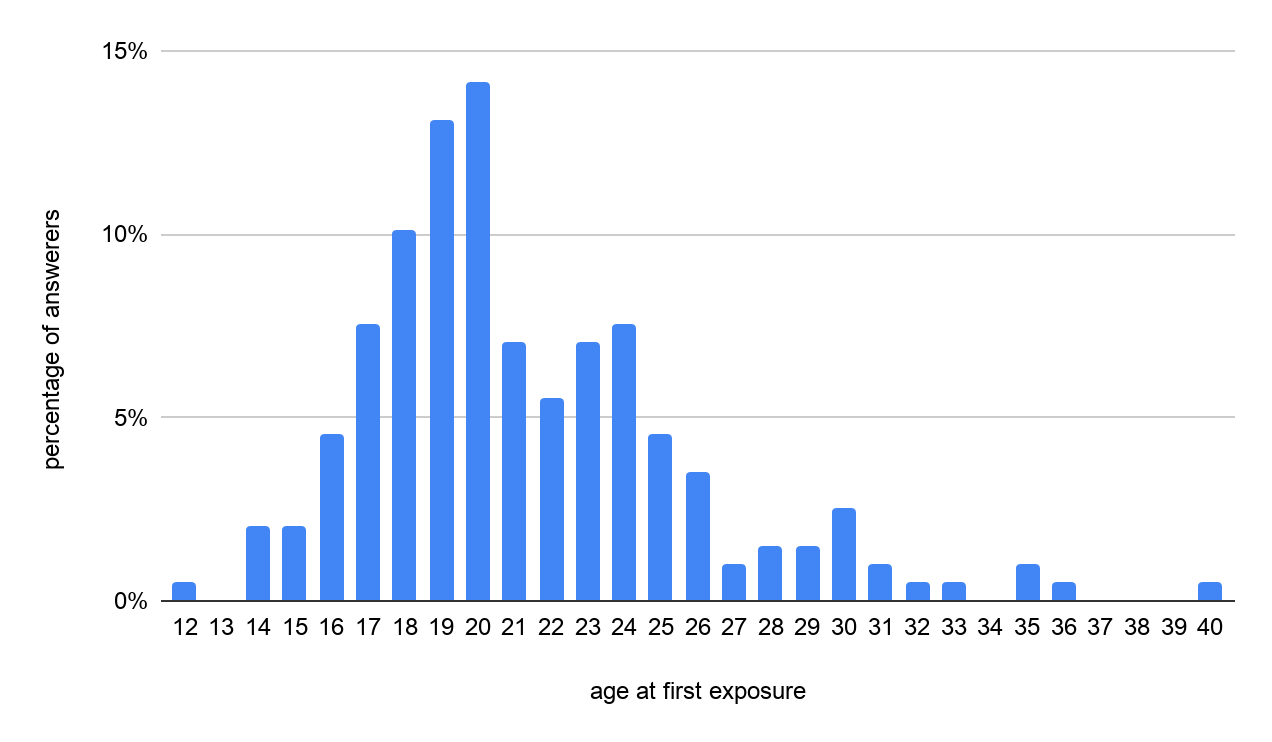 The mean was at age ~21.25, and the median was age 20. So our respondents on average first heard of EA/EA-adjacent ideas when they were college-aged. 27% of respondents reported first being exposed at age 18 or below. These results don't change substantially taking into account respondent weight. 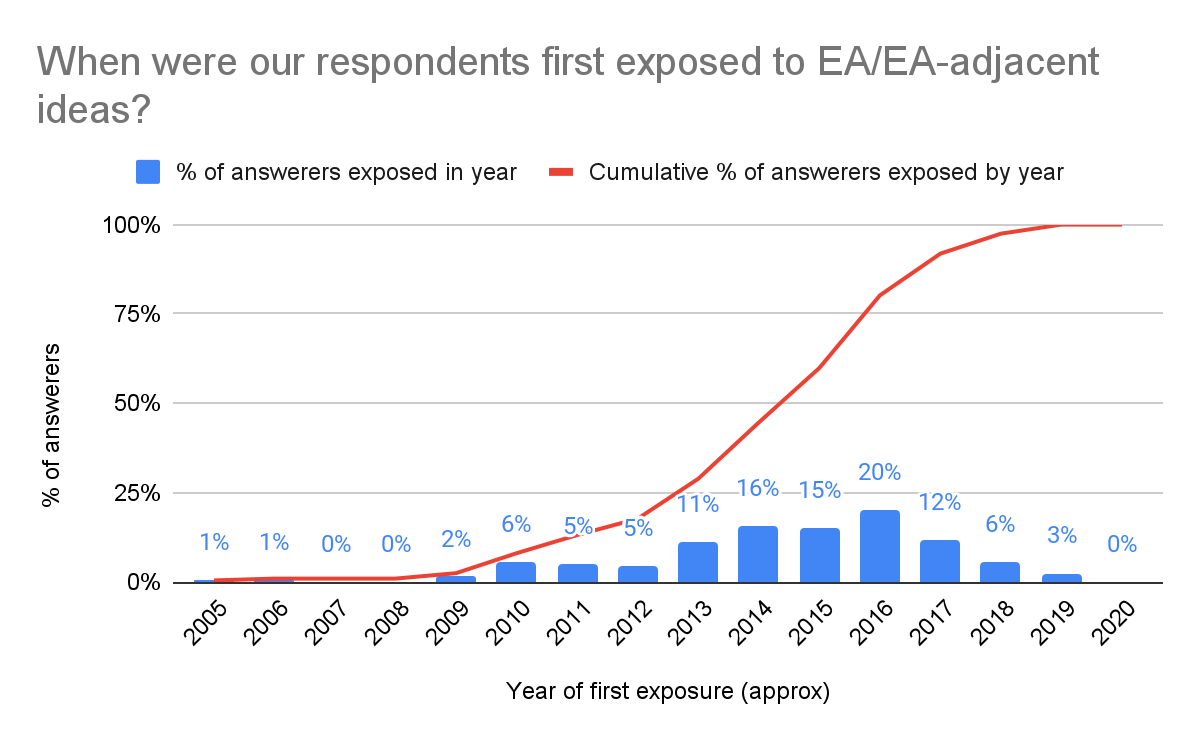 So despite our emphasis on the last three years in our selection process, our respondents on average got involved before that — those who “came to the attention” of our advisors in the last 3 years took some time to do so. Since we asked our advisors to suggest people who had come to their attention since 2017, it looks like this took between 2 - 4 years for these respondents on average.

Doing a quick eyeball of the two [OP and EAS] charts, they look pretty similar insofar as they’re comparable. “Peter Singer’s work” doesn’t appear, but it’s because they didn’t have that category — that would fall under “Book, article, or blog post” or “TED talk.” “Personal contact” leads in both, though by somewhat more in ours.

Notably, if we look at the EAS open comment data which I mentioned here, we can see that when Peter Singer references are counted as a single category, he's among the top-mentioned. 80,000 Hours don't appear among the top mentions in this analysis, most likely because they were a fixed category and respondents didn't feel the need to select 80,000 Hours and then write "80,000 Hours" in the further details box (personal contacts and EA groups often appeared in the further details of other categories, in contrast).