EA Survey Series 2019: EA cities and the cost of living

To do this, we used EA Survey data to find every city which had 10 or more EA respondents. We found 37 such cities. We then examined the estimated price of a one-bedroom central apartment on Numbeo.com.

Some preliminary things to bear in mind:

Below, we show the number of EA respondents in each of the cities with 10 or more respondents, as well as the estimated rent for a 1 bedroom apartment, sorted by number of EAs in the table, and cities sorted by cost in a graph. 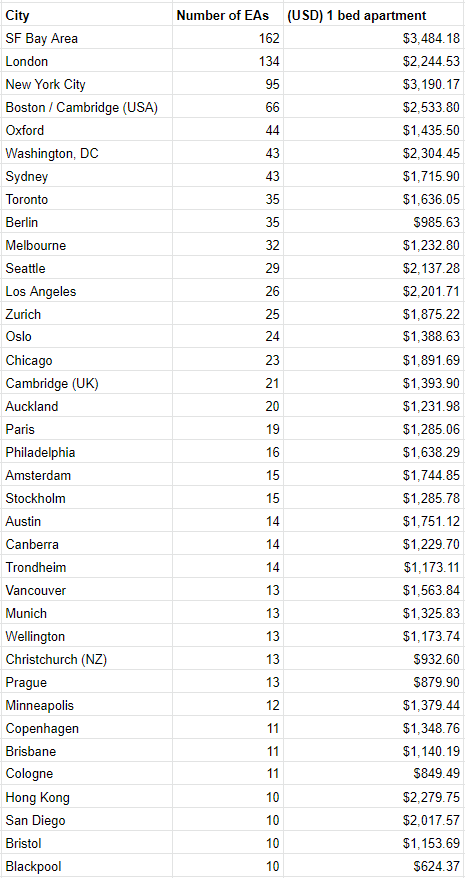 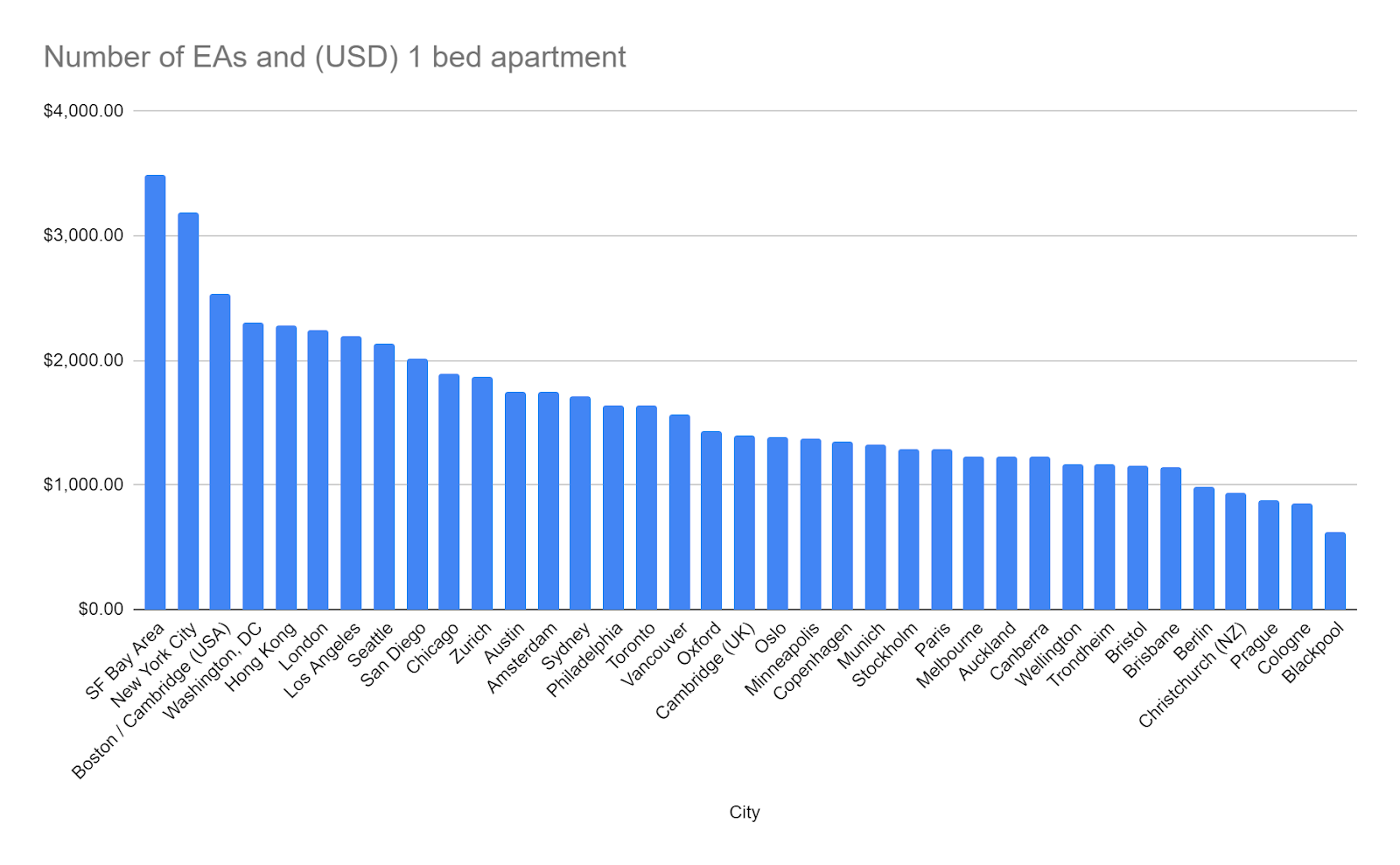 The location of major EA cities also seems to largely follow the geographic distribution of EAs overall, with the majority located in Europe (including the UK), the US coasts or Australasia. 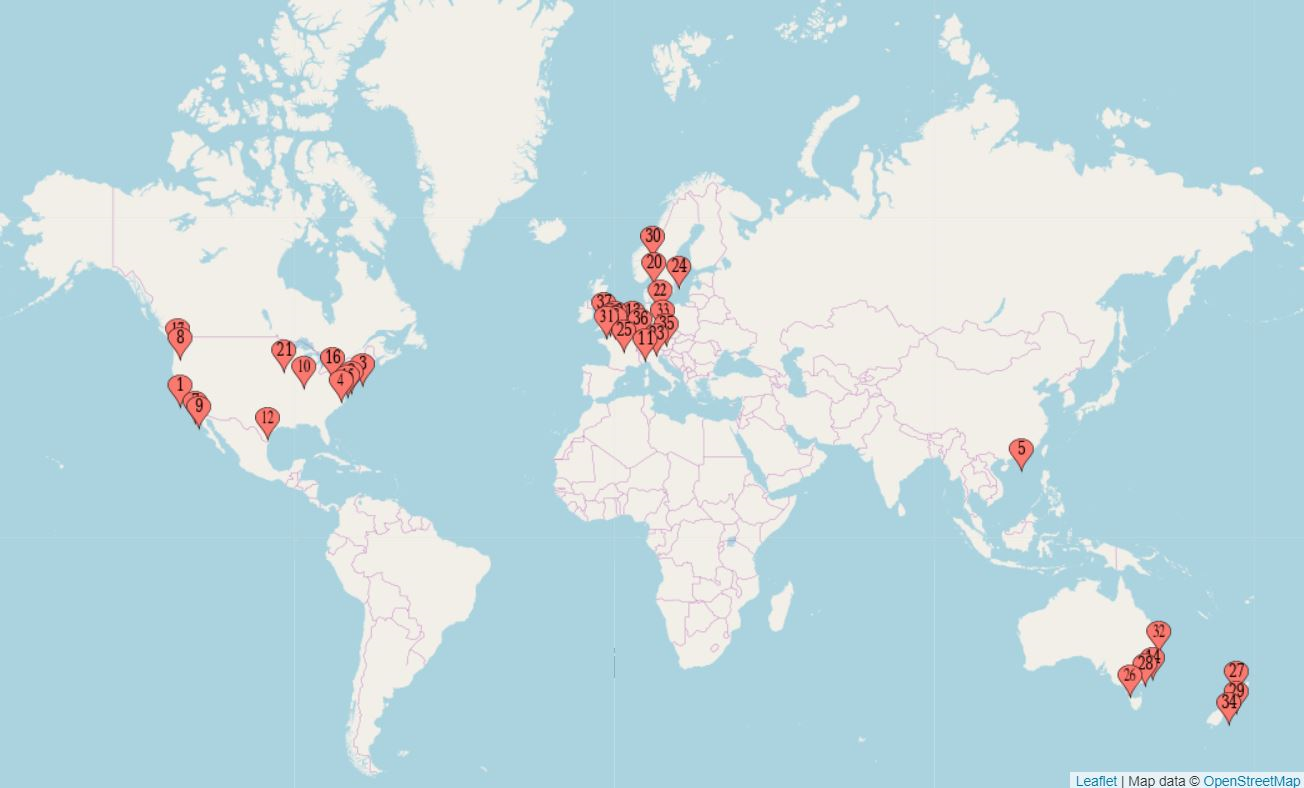 We can also see that there is significant regional variation in price even within this subset of cities, with US cities tending to be substantially more expensive. 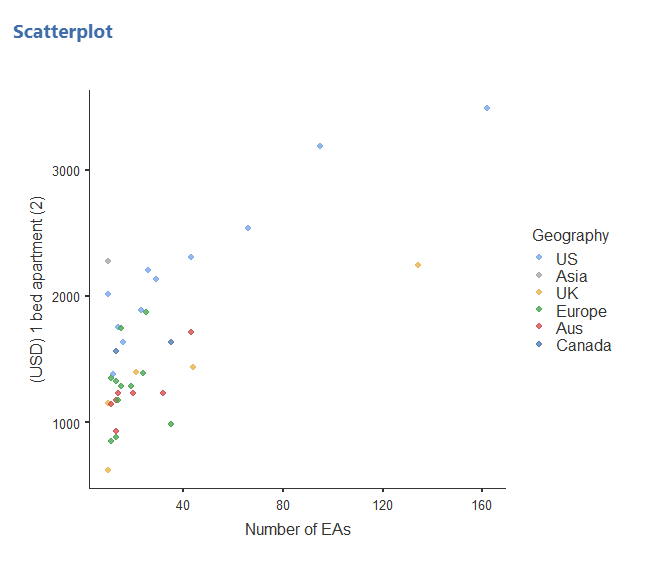 Overall, this seems to confirm that most cities with large EA populations are quite expensive, which may serve as a barrier to EAs wishing to live near a large number of other EAs.[2] Geography (i.e. living too far away from other EAs or EA orgs) was mentioned by a significant number of respondents as a barrier to further involvement in EA.[3]

Actually, there are more than you realise. I live in the Cleveland suburbs. We bought my husband's family home for a steal when we had to live in the city since he was a cop; my kid attended private schools, and with the vouchers available, it makes more sense to stay here with a paid-off property. Popular neighbourhoods have only recently begun to outperform what young graduates and families can buy, therefore our intercity area is witnessing an inflow of younger professionals. Flipped houses sell for roughly $90,000 read this guide. Foreclosures and fixer-uppers are becoming much more affordable.

this seems to confirm that most cities with large EA populations are quite expensive, which may serve as a barrier to EAs wishing to live near a large number of other EAs.

Does this suggest a coordination problem, or are there important countervailing reasons why EAs live in the expensive places?