EA Survey 2019 Series: How many people are there in the EA community?

How many people are there in the EA Community?

How many people there are in the EA community remains largely unknown. The two most recent EA Surveys received about 2500-2600 EA-identifying respondents, but we don’t know what proportion of the total EA community this represents. There are also multiple different criteria we could use to define the EA community.

David Nash has estimated that there are around 500-2000 people who “either attend multiple EA events each year or contribute to online discussion, and some proportion of people who work at an EA-related organisation.”

David Denkenberger, conversely, noted that local groups have around 2124 regular attendees (defined as 25% of events or an event every two months) based on estimates by local group organisers in the 2019 Local Groups Survey, which is higher than the upper bound of David Nash’s estimate.

Denkenberger also noted that there are 4400 Giving What We Can members in total and 843 self-identified GWWC members in the 2018 EA Survey (19% of the total membership) and so, if one were to assume this represented the response rate for the EA Survey as a whole, this would suggest that there were around 13,000 EAs.

That said, we suspect that Giving What We Can membership is not a good basis for making this kind of inference about what portion of the EA Survey we sampled. It seems likely that many people who have taken the Giving What We Can pledge are not engaged in, and perhaps do not identify with, the EA community. Luckily, we have access to a number of different proxies that we think serve better.

These results converge fairly closely on around 40%, provisionally suggesting we sampled around 40% of the real populations in these cases.

However, we need to take into account the fact that all of these groups would be fairly high engagement on average, probably around levels 4-5 on the self-reported engagement scale below.[5]

On the whole, we would expect to sample higher proportions of more engaged EAs, at around the 4-5 level, due to higher engagement causing higher motivation and them also being more likely to encounter the EA Survey more often.[6] Conversely, we would expect people matching the description of levels 1-2 to be less likely to encounter the survey and to have less reason to take it.[7]

Looking at the EA Survey results, this is what we see, with slightly more at level 3 than 4 or 5, but fewer at level 1 or 2. 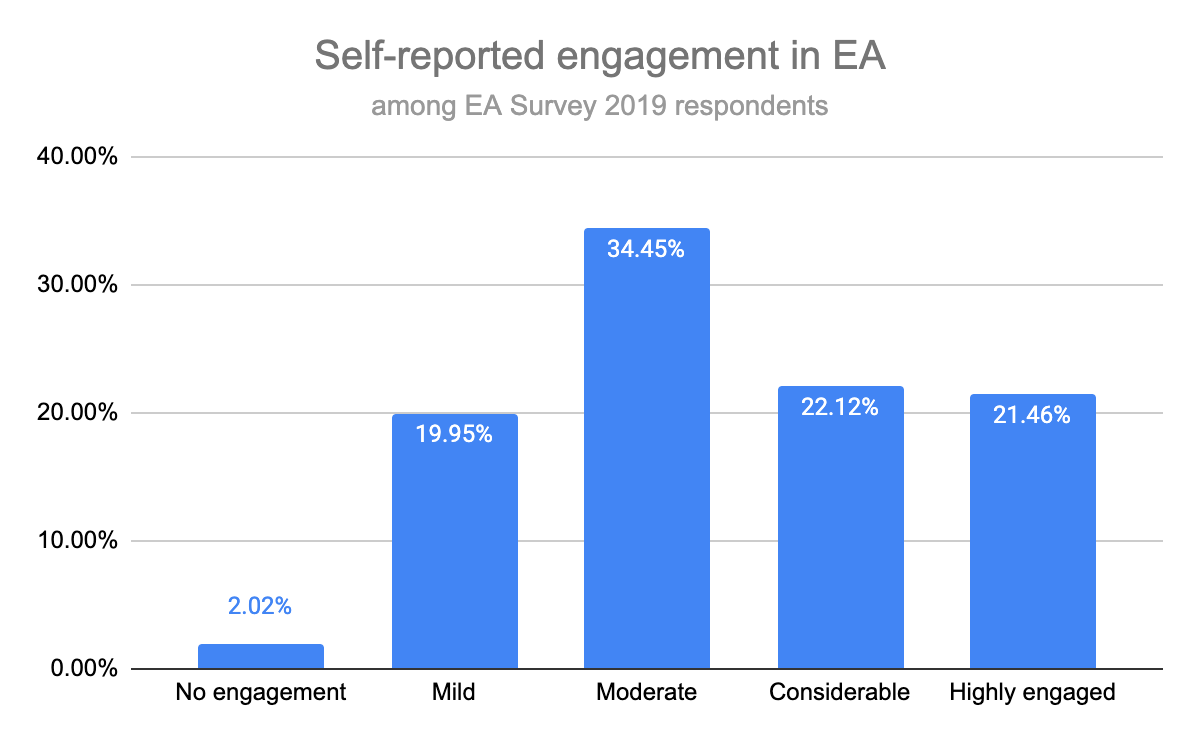 In general, we would expect there to be more people who are peripherally engaged with EA or who have merely encountered the idea, as suggested by the funnel (or concentric circles) models. 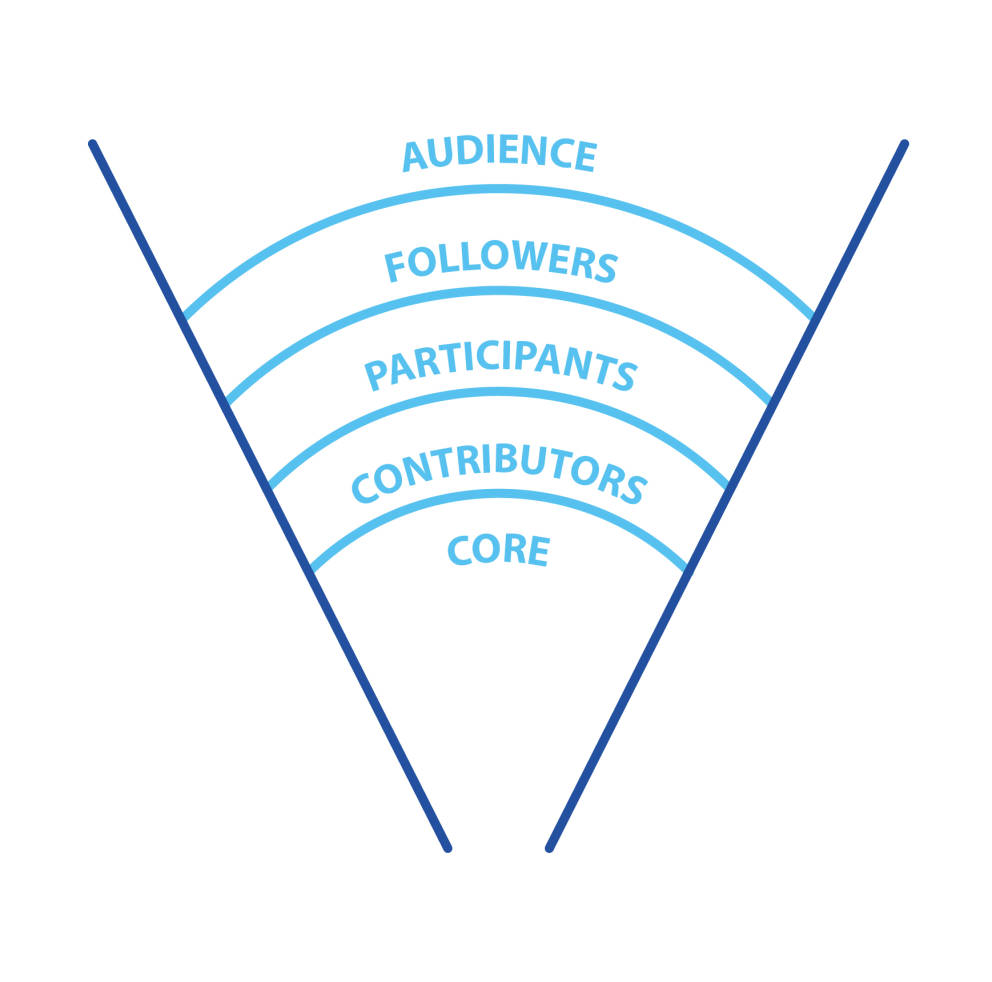 So this suggests, as we would expect, that the EA Survey samples relatively more people from the moderately engaged ‘participants’ group and upwards, than from less engaged groups.

Nevertheless, for estimating the size of the EA community we are probably mostly interested in respondents who identify at least with level 3. To reiterate: this corresponds to someone who has “engaged with multiple articles, videos, podcasts, discussions, or events on effective altruism” and who “sometimes consider the principles of effective altruism” when they “make decisions about... career or charitable donations”,[8] which seems a plausible minimal characterisation of involvement in the EA community.[9] Someone selecting level 2, conversely, has engaged with a few articles/podcasts etc., but may not even necessarily “sometimes consider the principles of effective altruism” when making decisions. Of course, being part of the “EA community” in this sense is not a criterion for being effective or acting in an EA manner- for example, one could donate to effective charity, without being involved in the EA community at all[10]- but it still seems valuable to estimate how many people are involved in the EA community specifically in this narrower sense.

Since the proxies we used to estimate our sampling rate predominantly apply to level 4-5 EAs, we can estimate the size of this higher engagement population. There were 926 level 4-5 EAs in our sample, so if we sampled around 40% of this population, we would expect there to be 2315 in this population in total. Of these, 1140 would be estimated to be in the highest level of engagement (level 5).[11] 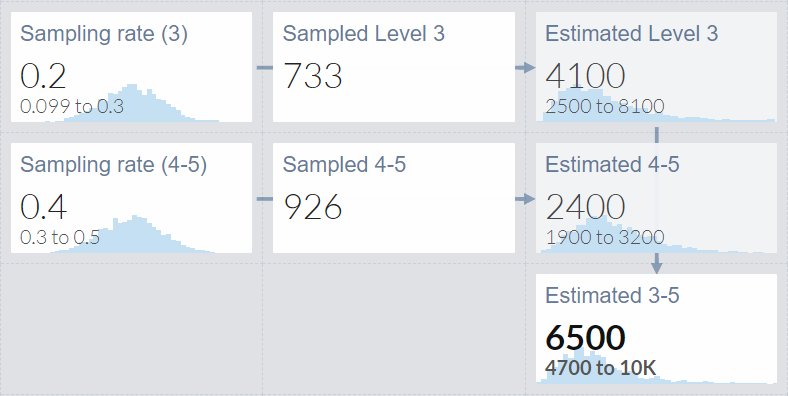 This suggests that there are roughly 2000-3000 highly engaged EAs in total- quite a lot, in some ways, but still very small in others. For example, this would only be a fraction of the student population of most universities.

Likewise the estimated size of the EA community more broadly, worldwide, is only 5000-10,000 or about the size of a small town or university. Indeed, the global EA community, even according to the larger estimates, only has about as many members as the weekly attendance of a mid-ranking mega-church. These kinds of numbers seem worth bearing in mind when thinking about the reach and scope of the EA community.

The annual EA Survey is a project of Rethink Charity with analysis and commentary from researchers at http://rethinkpriorities.org/. This essay was written by David Moss. Thanks to Aaron Gertler, Peter Hurford, Jason Schukraft and Neil Dullaghan for comments.

We would also like to express our appreciation to the Centre for Effective Altruism and the EA Meta Fund for supporting our work. Thanks also to everyone who took and shared the survey.

Thank you for writing this up!

Coming together weekly to meet in person as a movement, like megachurches do, is an interesting thought experiment. Post-COVID, if remote work is the new norm, it might be feasible to locate all of EA in a single city with low cost of living. Would this be a positive change? My intuition says yes, but with high uncertainty. Maybe it's just me being extroverted.

We'll be addressing this indirectly in the next couple of posts as it happens.

Whether or not it's good or bad, it's a cool idea!

Thanks for the important post! I'm very interested in hearing from others (and particularly Giving What We Can leadership) as to whether their members would be considered EAs. In discussion a few years back, I was under the impression that the consensus was they were the gold standard for EAs. I would put them at a three or four on your scale minimum. But it could be true that a significant fraction do not self identify as EAs. So then it is a question of whether action or identification is more important-I would favor action.

Thanks for the reply!

So then it is a question of whether action or identification is more important-I would favor action.

This is the kind of question I had in mind when I said: "Of course, being part of the “EA community” in this sense is not a criterion for being effective or acting in an EA manner- for example, one could donate to effective charity, without being involved in the EA community at all..."

I think this holds true even if an activity represents the highest standard that all EAs should aspire to. The fact that something is the highest standard that EAs should aspire to doesn't mean that many people might not undertake the activity for reasons unrelated to EA, and I think those people would fall outside the "EA community" in the relevant sense, even if they are doing more than many EAs.

I think "been influenced by EA to do EA-like things" covers a very wide array of people.

In the most expansive sense, this seems like it would include people who read a website associated with EA (this could be Giving What We Can, GiveWell, The Life You Can Save or ACE or others...) decide "These sound like good charities" and donate to them. I think people in this category may or may not have heard of EA (all of these mention effective altruism somewhere on the website) and they may even have read some specific formulation that expresses EA ideas (e.g. "We should donate to the most effective charity") and decided to donate to these specific charities as a result. But they may not really know or understand what EA means (lots of people would platitudinously endorse 'donating to to the best charities') or endorse it, let alone identify with or be involved with EA in any other way.

I agree that there are many, many more people who are in this category. As we note in footnote 7, there are literally millions of people who've read the GiveWell website alone, many of whom (at least 24,000) will have been moved to donate. Donating to a charity influenced by EA principles was the most commonly reported activity in the EA survey by a long way, with >80% of respondents reporting having done so, and >60% even among the second lowest level of engagement.

I think a good practical test would be: if you went to some of these people who were moved to donate to a GiveWell/ACE etc. charity and said "Have you heard that many adherents of effective altruism, believe that we should x?", if their response is some variation on "What's that?" or "Why should I care?" then they're not part of the community or network of people interested in EA. I think this is a practically relevant grouping because this tells you who could 'be influenced by EA to do EA things', where we understand "influenced by EA" to refer to EA reasoning and arguments and "EA things" to refer to EA things in general, as opposed to people who might be persuaded by an EA website to do some specific thing which EAs currently endorse but who would not consider anything else or consider maximising effectiveness more generally.

Thanks for this David! Nice comparisons!

When I talk to people about EA (often after people ask me about what I do with myself), it is very common for people to ask questions like "I haven't heard of effective altruism before, how large is the movement?" and then "Why isn't it larger? Have you tried ..." with some suggestions for large scale outreach.

While I feel comfortable discussing this question when I'm talking to dedicated EAs, the nuanced pros and cons of various movement-building strategies isn't really what I would like the first conversation about EA to turn to... it is just not all that inspiring. I'd much rather keep talking about cause areas and charities and how we might build a wonderful future.

How do other people deal with questions about the size of the movement?

I agree this would both not be very inspiring and risk sounding elitist. I don't have any novel ideas, I would probably just say something vague about wanting to spread the ideas carefully and ensure they aren't lost or distorted in the mass media and try to redirect the topic.