This post is part of Rethink Charity's series on the EA Survey 2019, which provides an annual snapshot of the EA community. In this report, we explore the geographic distribution of EAs in the survey. We have already explored demographics, cause prioritization and careers and skills. In the future, we will explore how these EAs first heard of and got involved in effective altruism and their donation patterns.

Effective Altruism is a global movement. There are local EA groups in approximately 45 countries,[1] EA Global and EAGx conferences have been held in 9 countries across 5 continents,and many EAs are keen to build a framework for developing EA in emerging locations. The survey data does not allow us to reveal the citizenship or place of birth of EAs, but we can see where they reported currently living when the survey was conducted (September-October 2019). The geographic distribution of EAs is likely due to a combination of where the movement has been best at recruiting but also where EAs, who are disproportionately a young, white, male educational elite, are most likely to have moved to. While EAs in this year’s survey reported living in 60 different countries,[2] respondents continue to most often be currently living in English speaking countries, especially the USA and UK (see here and here for discussions about the dominance of English in EA).

The countries EAs most commonly report living in remained mostly unchanged from last year. 55% of EAs in the survey live in the USA or UK, 24% in the rest of Europe, 10% in Australia or New Zealand, and 4% in Canada. The share of EAs living outside of the 5 top countries (USA, UK, Germany, Australia, Canada) has increased by 4% (from 22% to 26%) compared to 2018’s survey sample. 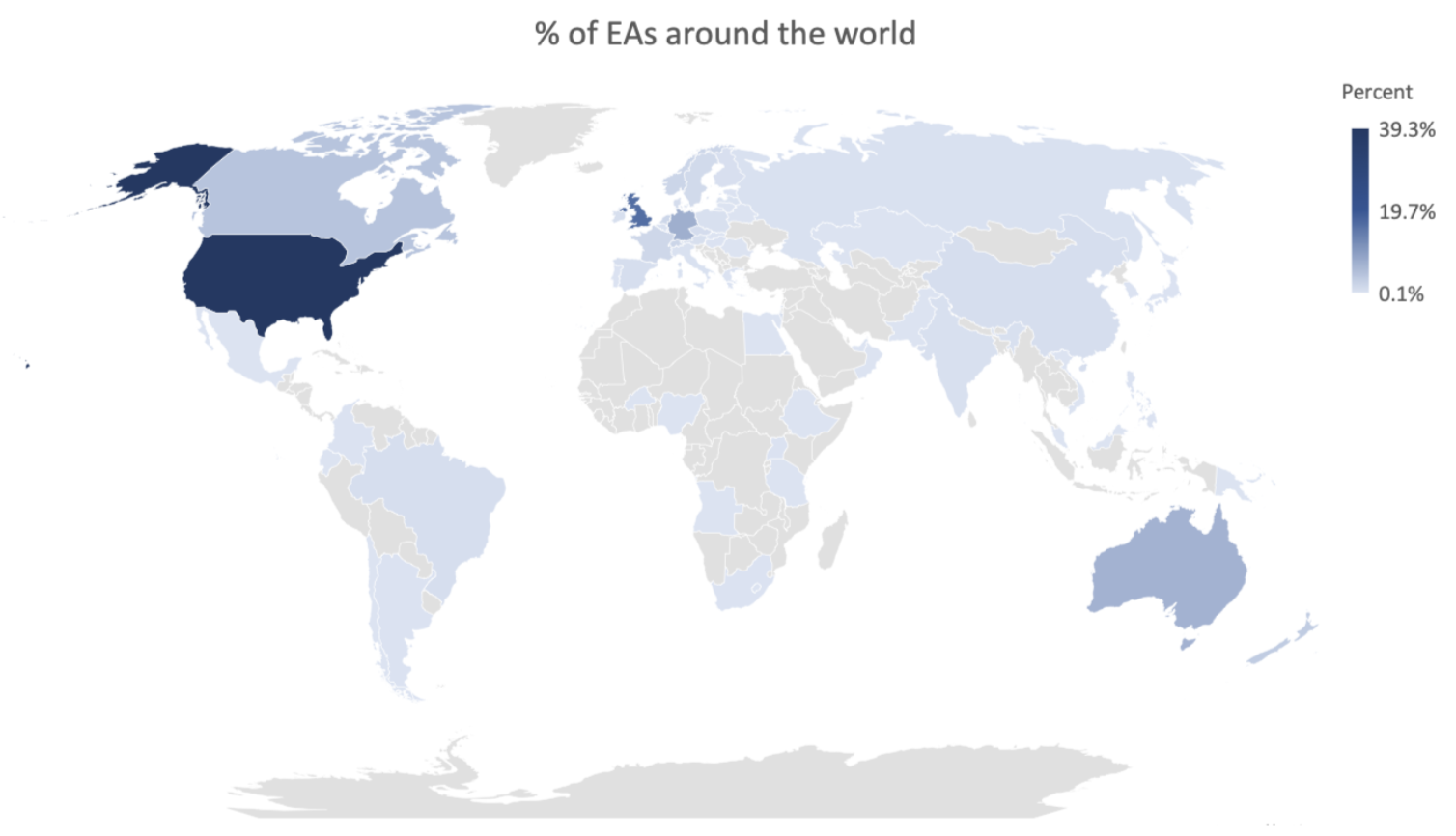 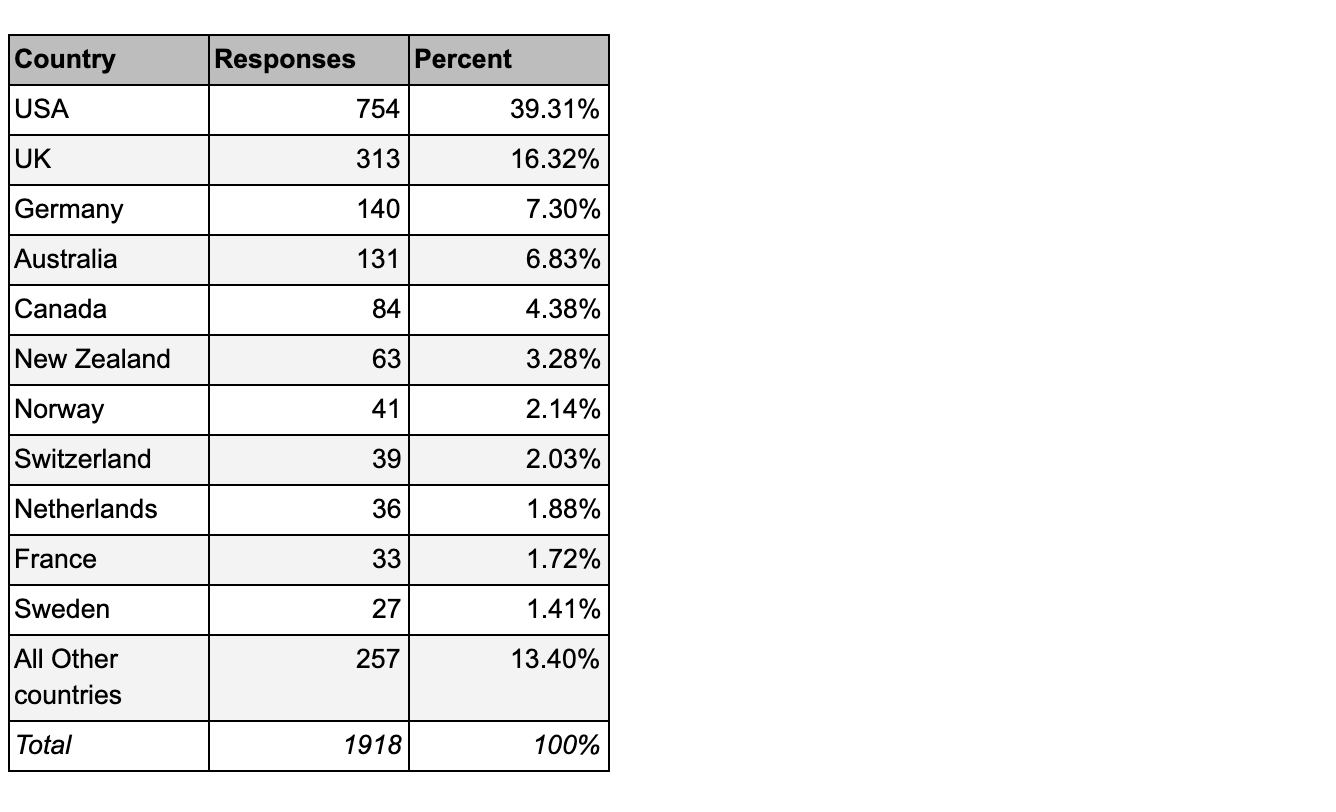 1.4% of EAs live in global population hubs China and India, which is even more than in the entire continents of Africa or South America (~1% each), but the same percentage as live in comparatively smaller Sweden. Looking at the number of EAs living in a country relative to the total population of that country gives us some indication of the saturation EA has reached there. New Zealand, Norway, Australia, the UK, and Switzerland make up the top 5 on this measure. 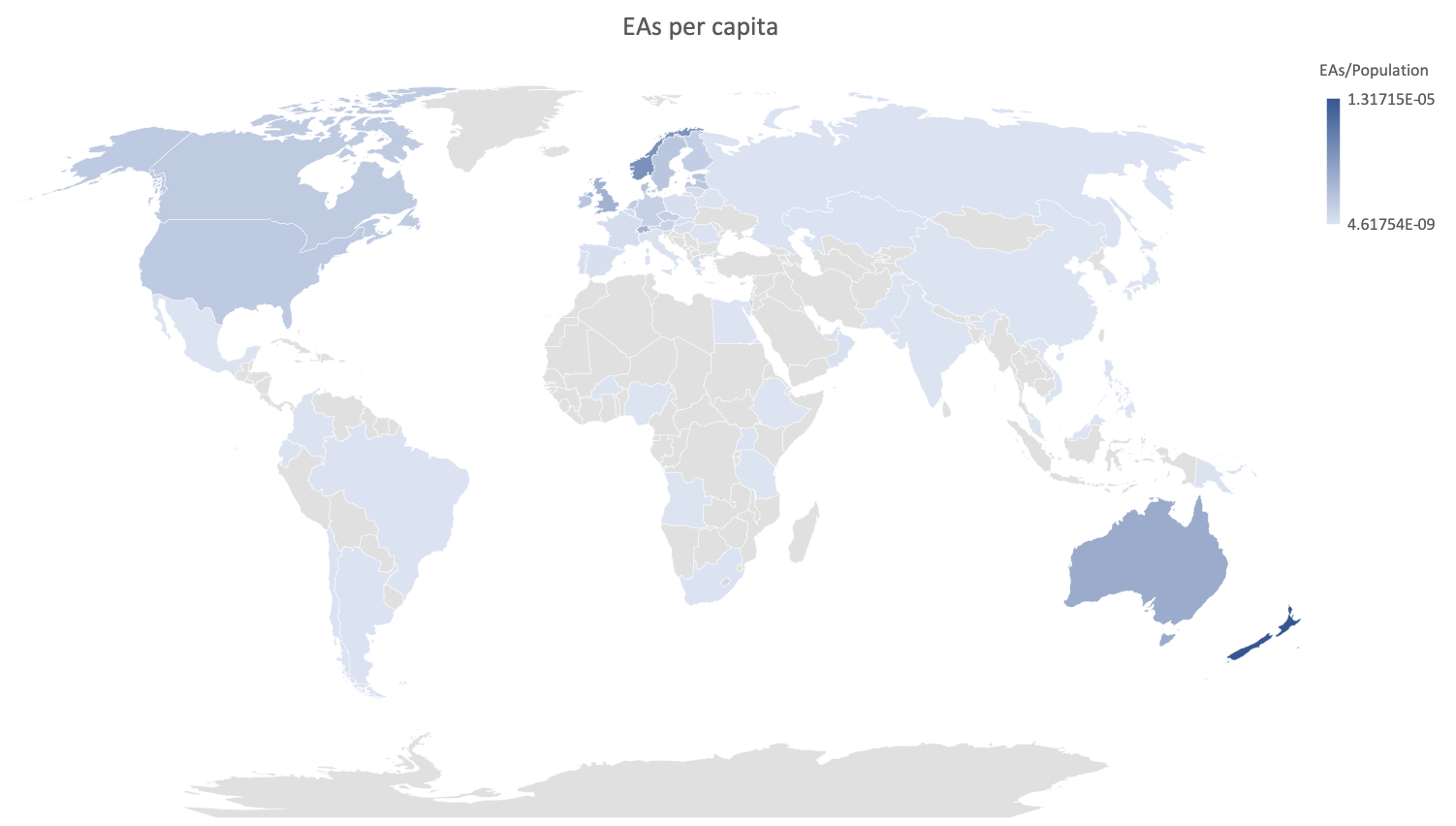 For ease of comparison we highlight only the top EA countries by absolute number of EAs. Although the absolute number of EAs per countries is down across the board due to a smaller sample this year, New Zealand clearly stands out due to having double the number of EA respondents reporting living there compared to 2018. The jump in EAs per capita is partly due to New Zealand having a relatively small population, however, even if there were 25 fewer EAs in New Zealand it would still lead this table, so higher recruitment might also play a role. Like last year, we see data that suggests that the UK has a large number of EAs per capita comparable to countries with much smaller total populations. 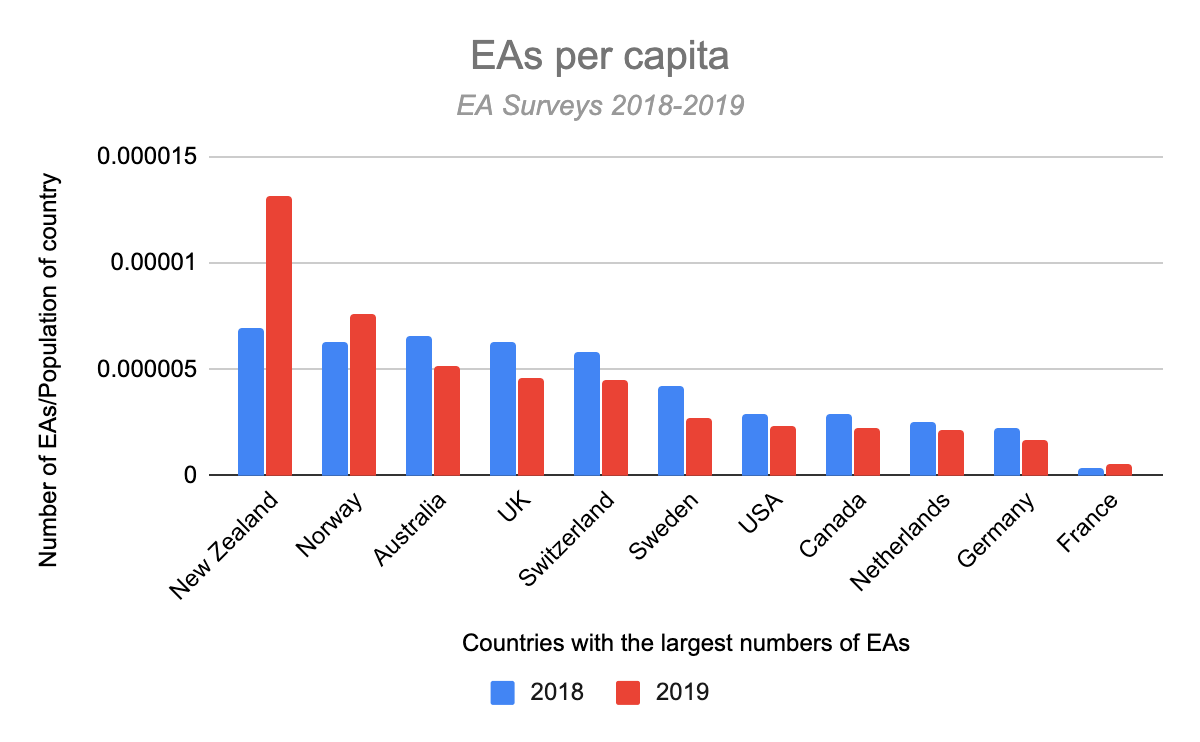 EAs in each city

The most commonly reported city an EA lived in was the San Francisco Bay Area (with 9% of respondents) followed by London (7%) and New York City (5%), though there was an extremely long tail of smaller cities and Other responses. [3] In the figure below it is clear that the number of EAs in the top “major hubs” is dwarfed by the number of EAs in “Other” cities which are not named in the figure below due to having fewer than 10 EAs. 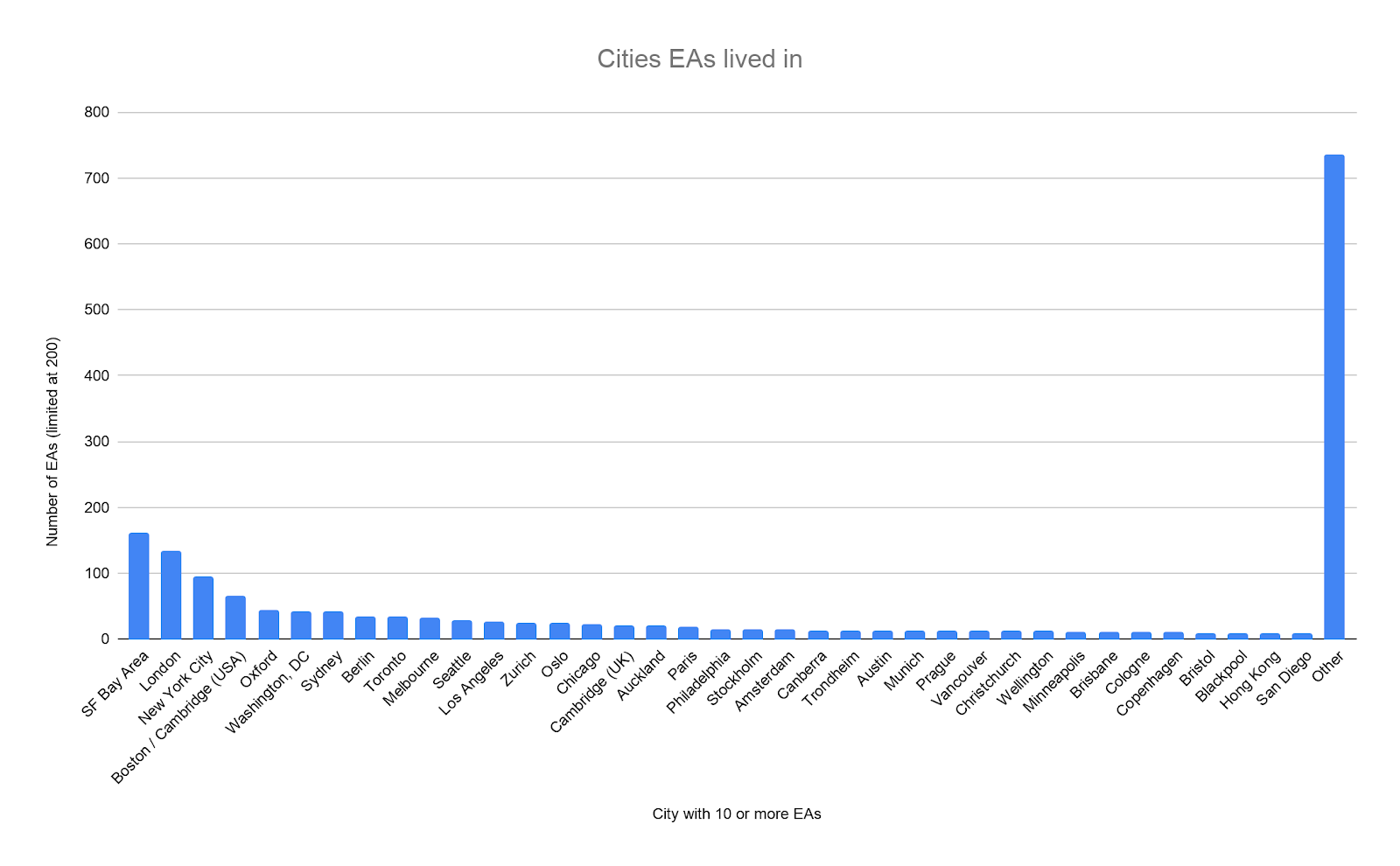 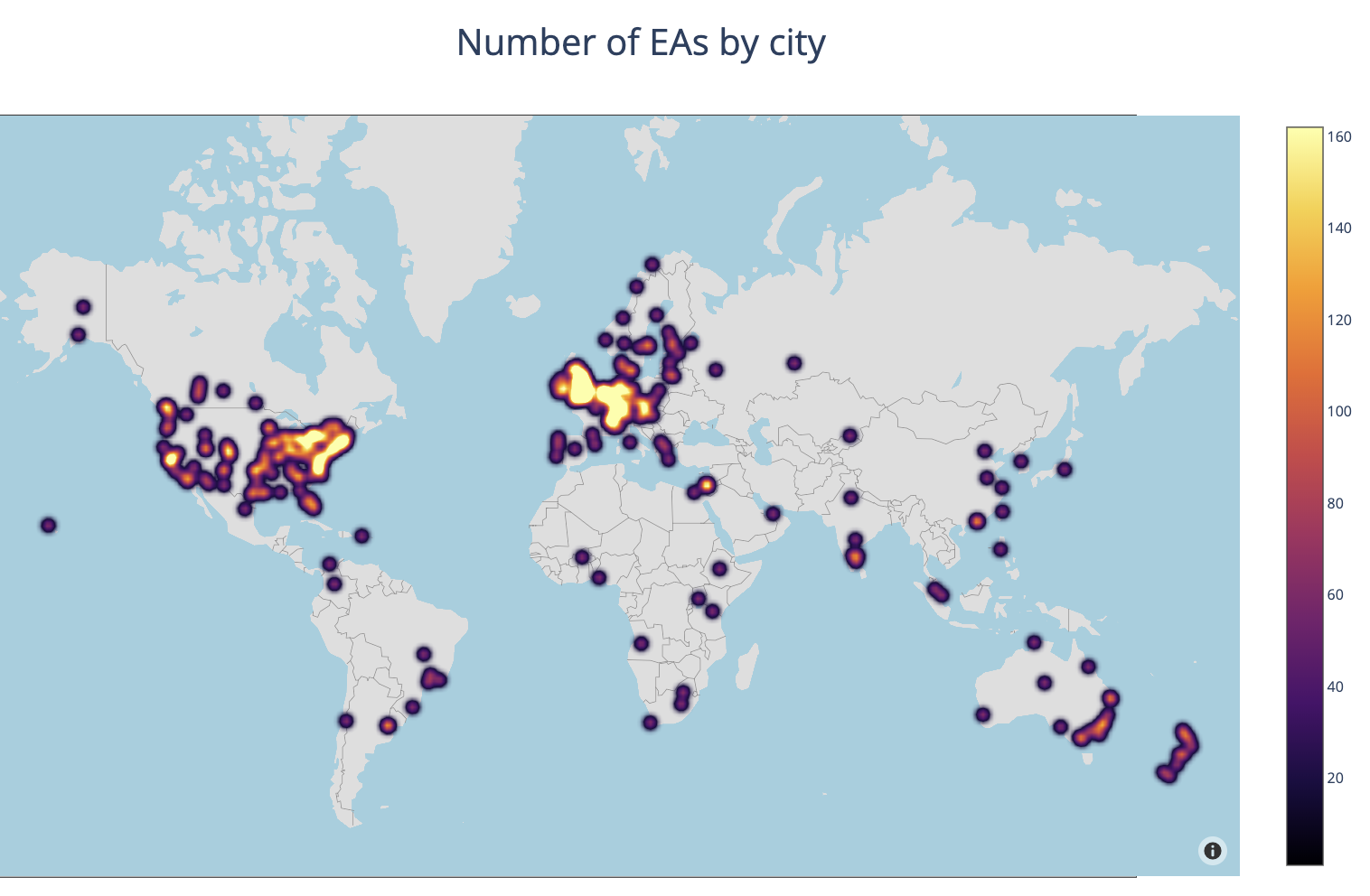 In the next figure only the 10 largest hubs are highlighted for easier comparison.

We then examined the number of EAs in a city relative to the population of those cities. Looking only at those cities with 10 or more resident EAs, university cities Oxford and Cambridge led the list, followed by Blackpool presumably in part because of the EA hotel. We should also note that the San Francisco Bay Area has a large number of EAs (even for the size of the total metropolitan area), as does London. 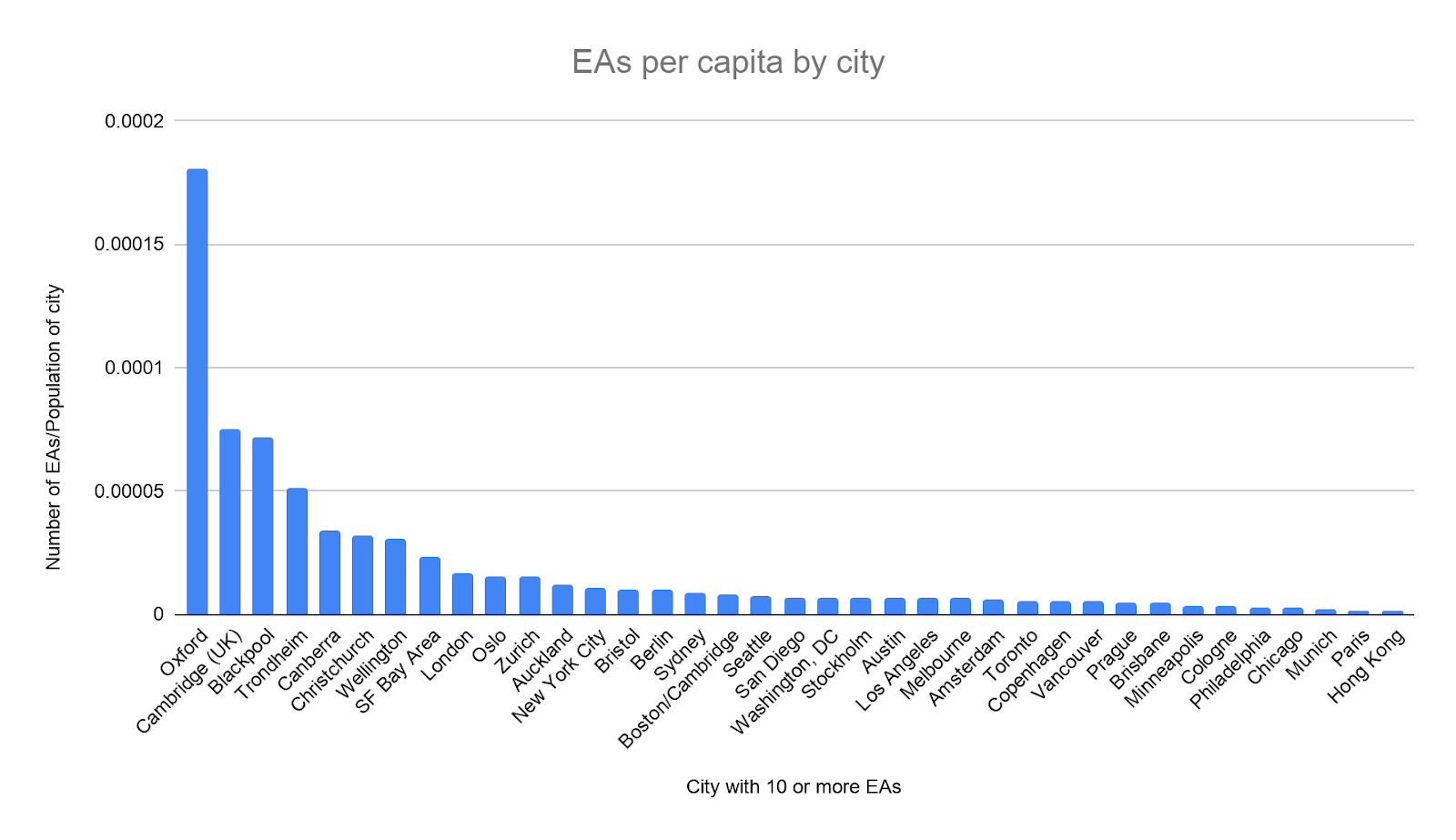 For the remainder of this report we group the country data into the broad geographical categories of USA, UK, Other Europe and Rest of the World as these offer more comparable group sizes. The share of EAs living in the USA declines by years a respondent has been in EA. Again we should remind the reader that the data reflects where EAs currently live and neither their nationality nor where they lived when they joined EA necessarily. Those who have been in the movement the longest are most likely to currently live in the USA and UK, however a majority of the newest EAs live outside of these two countries. 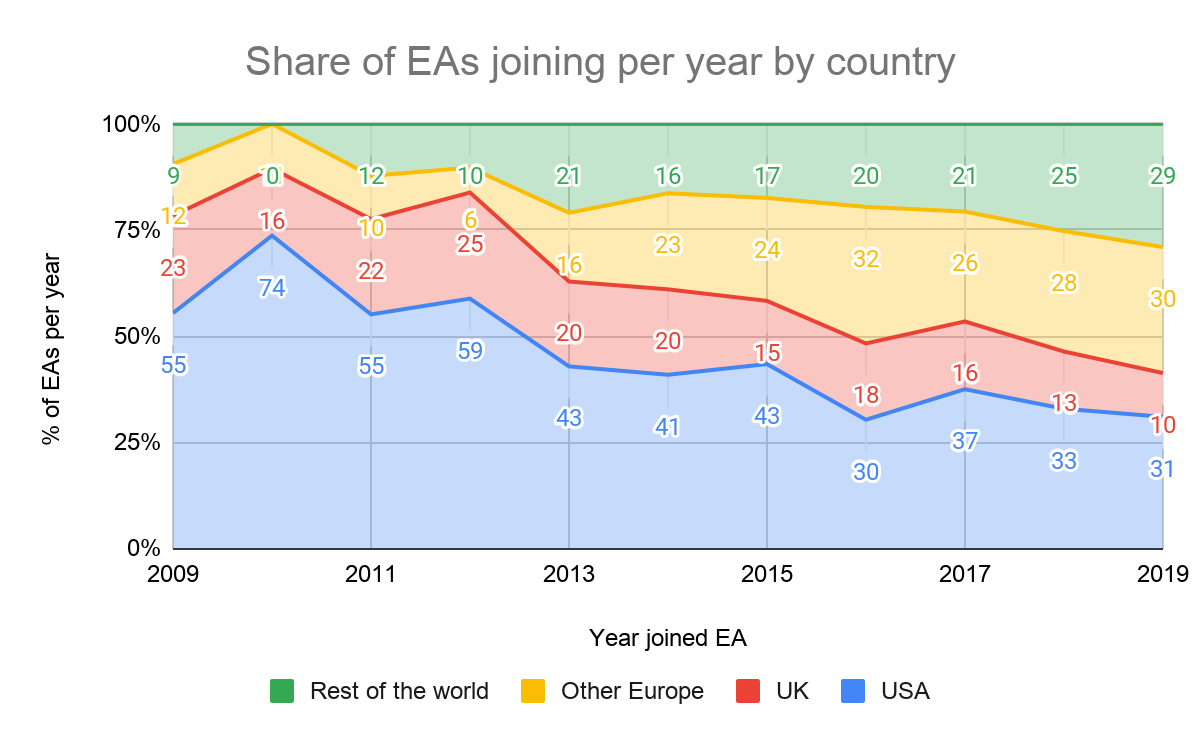 We also see some evidence of a plateau or even decline in the absolute number of EAs living in the UK and the rest of Europe who joined after 2016. 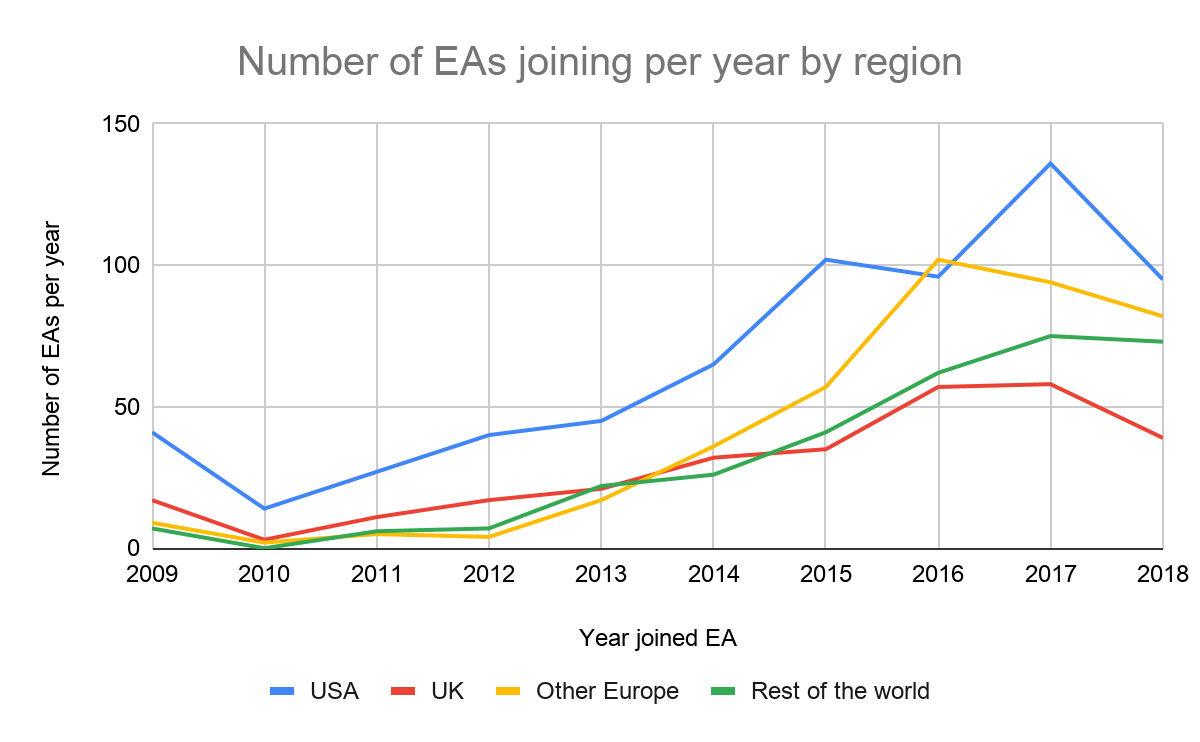 One reason to be more tentative about these possible shifts is that we only have survey results from those who have remained in EA since they joined, and we do see some differences from the results of 2018’s EA survey. For example, far fewer EAs in the 2019 survey reported having joined EA between 2015 - 2017 than did so in the 2018 survey, and this trend appears across countries. This could be a sign that many EAs drop out within 1-3 years of first involvement, while those who have been engaged 5 or more years rarely drop out. Running a few more years of the EA survey may allow us to find out if this is the case.

The survey included a question asking EAs to report their level of engagement in EA on a 5 point scale of No Engagement to High Engagement.[4] EAs living in the UK had the largest share reporting to be highly engaged (31%). Meanwhile, EAs living outside of the USA and Europe reported the largest shares of non-engaged or only mildly engaged EAs. The self-reported engagement scale offered descriptive criteria for each level, some of which people living outside “core” geographic areas may find it harder to do. For example, they might find it harder to attend an EAG or work at an EA organization, even if they are maximally engaged otherwise. 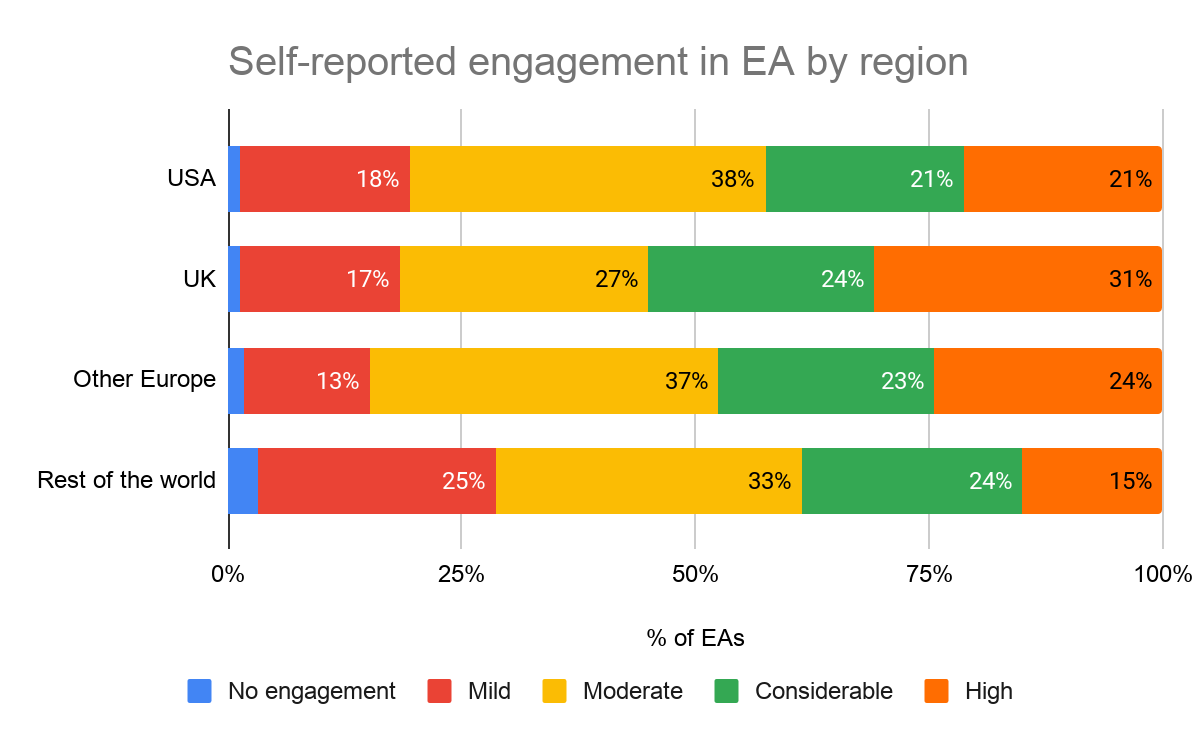 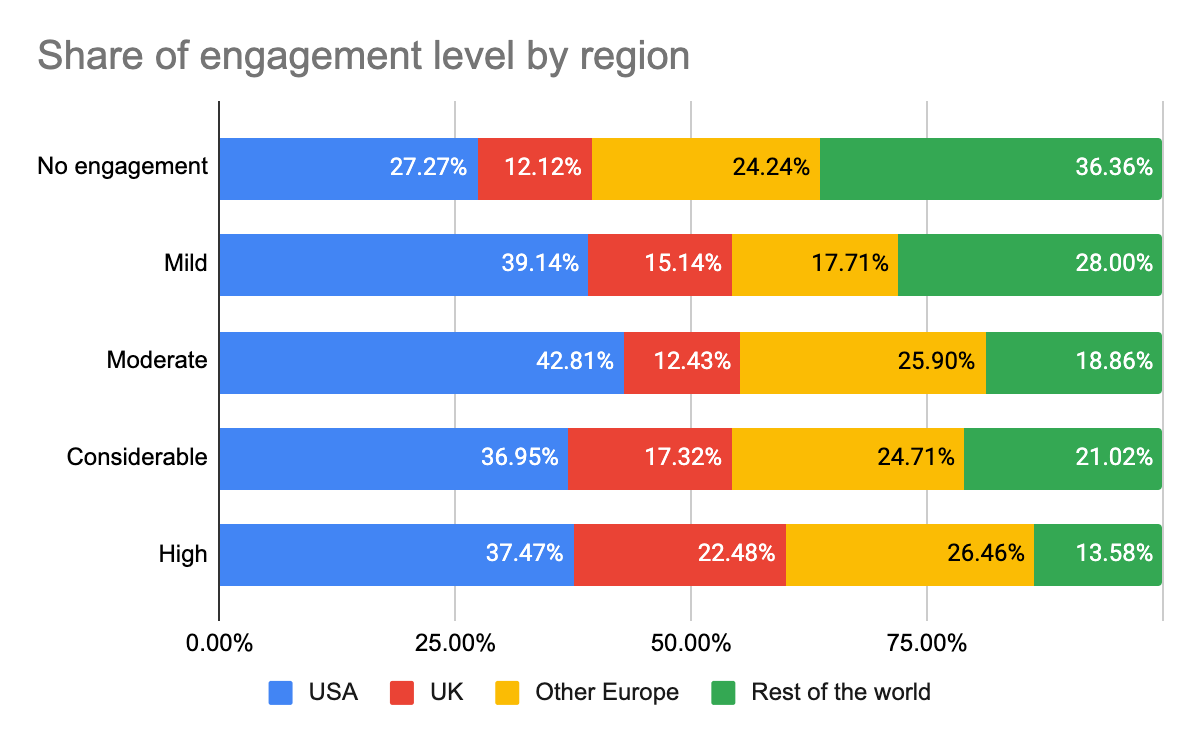 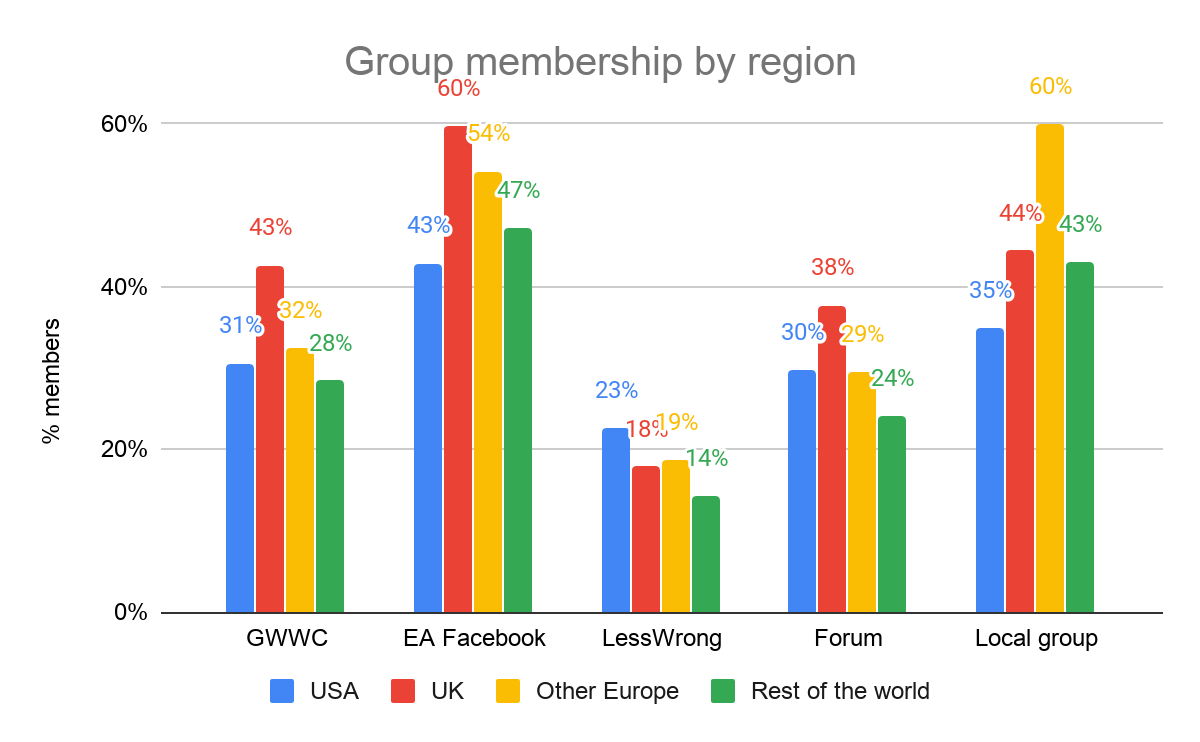 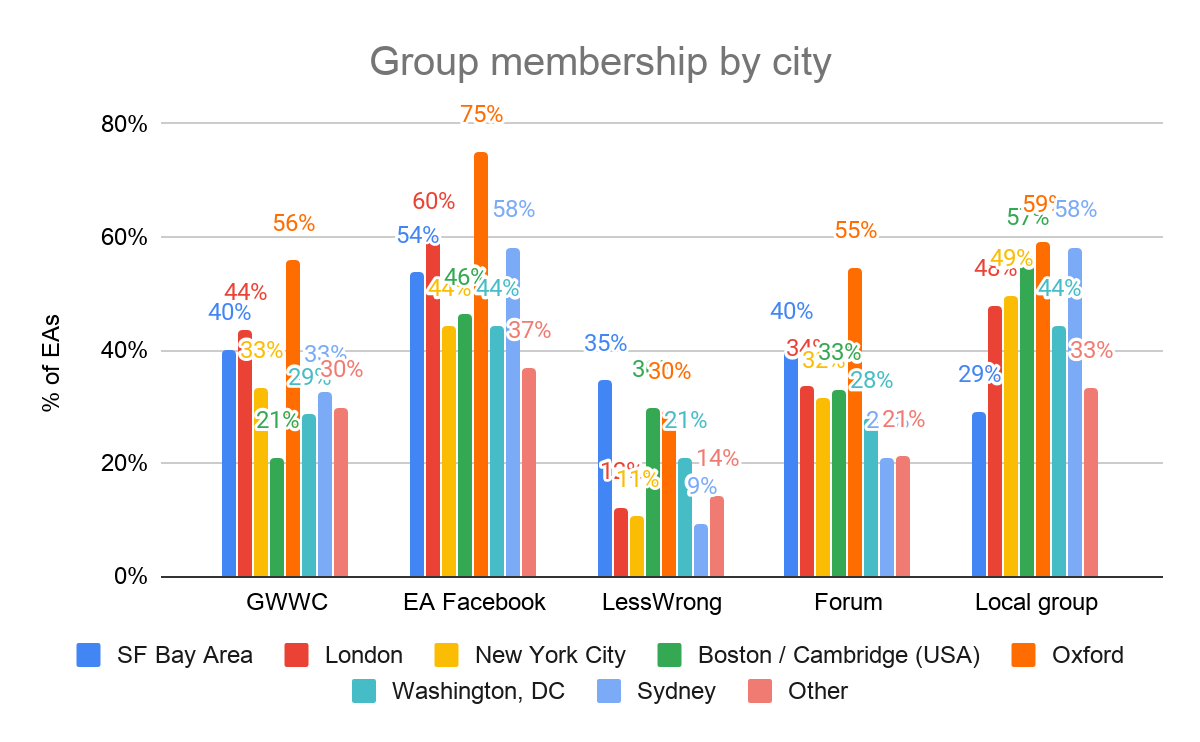 The most popular career paths that effective altruists in the survey plan to follow are in earning to give roles (38%) and working at EA organizations (37%). The survey allowed respondents to select multiple career paths they plan to follow. Earning to give is even more popular among EAs living in the USA (41%) and less so in the UK, where only 26% of EAs reported pursuing this career path. EAs in the UK instead were more likely to select planning to work at an EA organization (48%). EAs living elsewhere in Europe were most likely to choose academia (39%). We have already highlighted elsewhere how the skills most needed by EA are spread geographically. 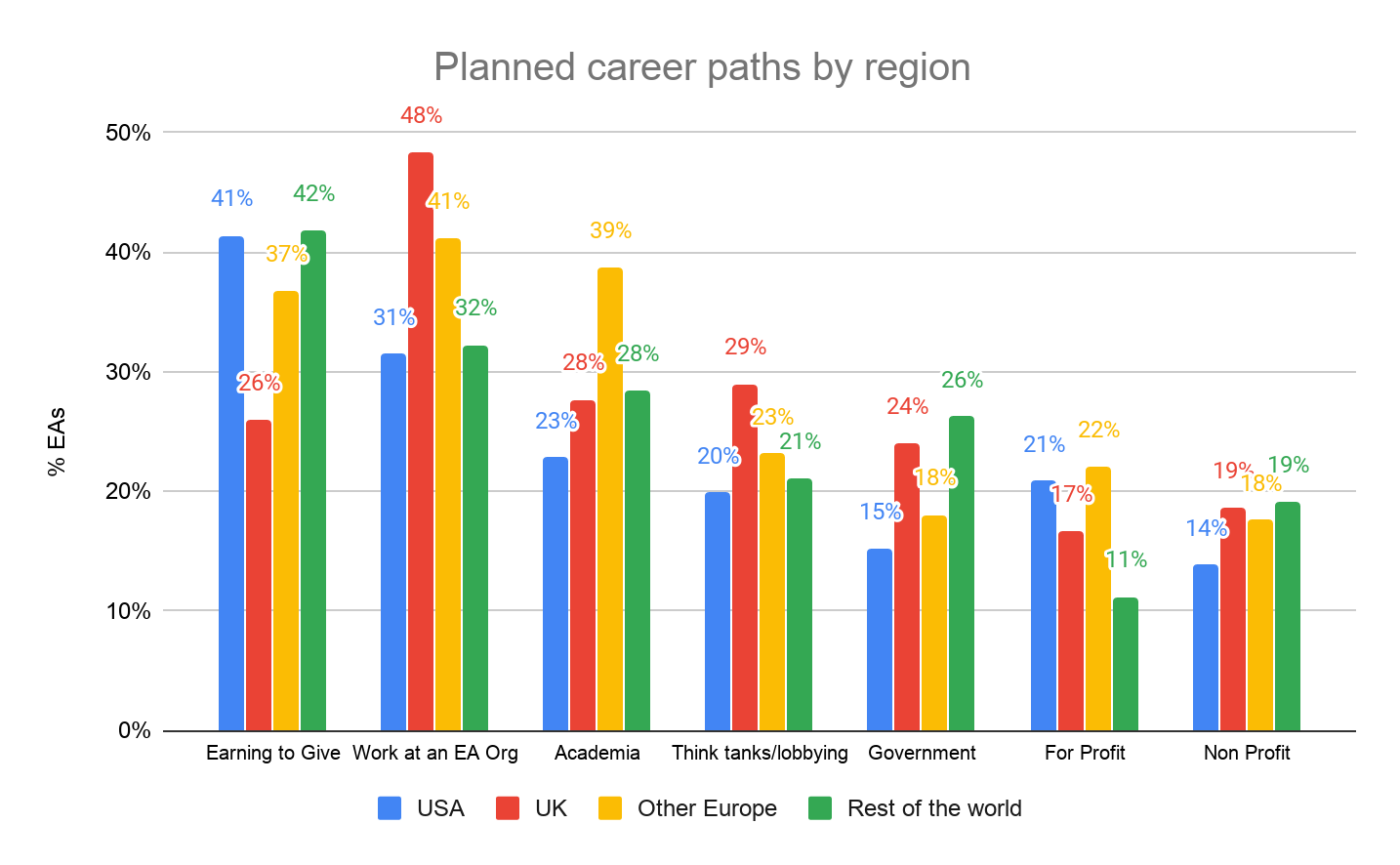 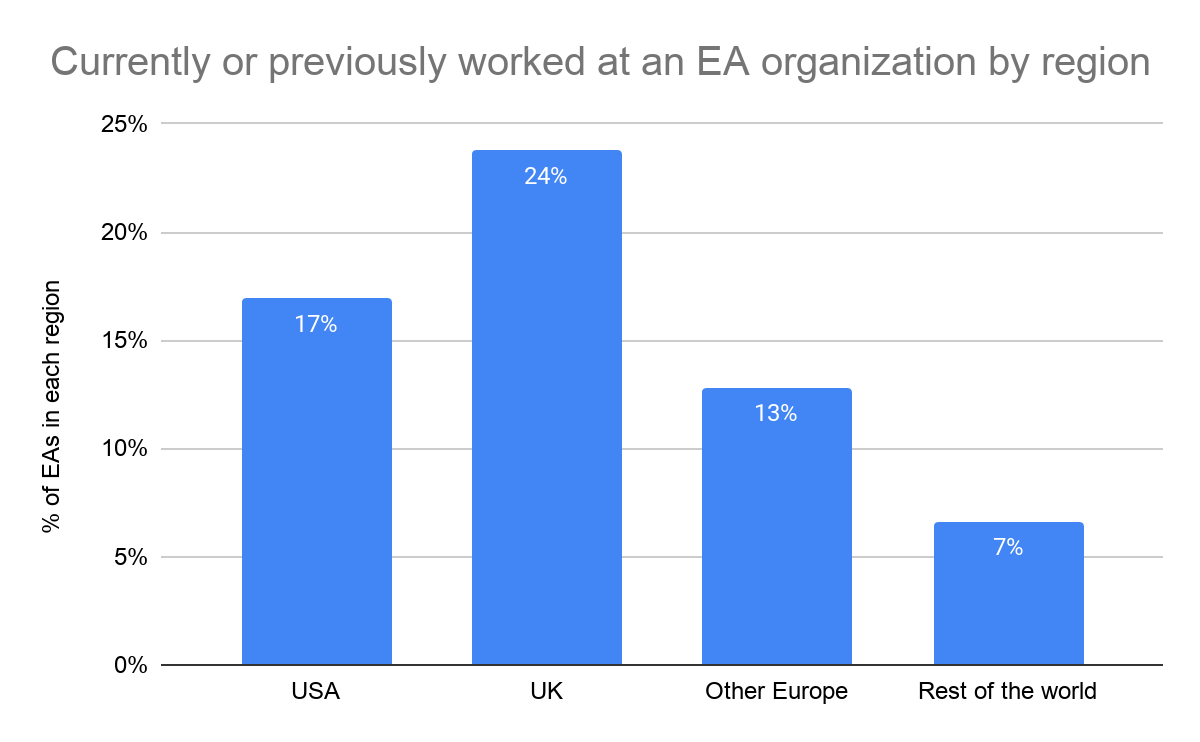 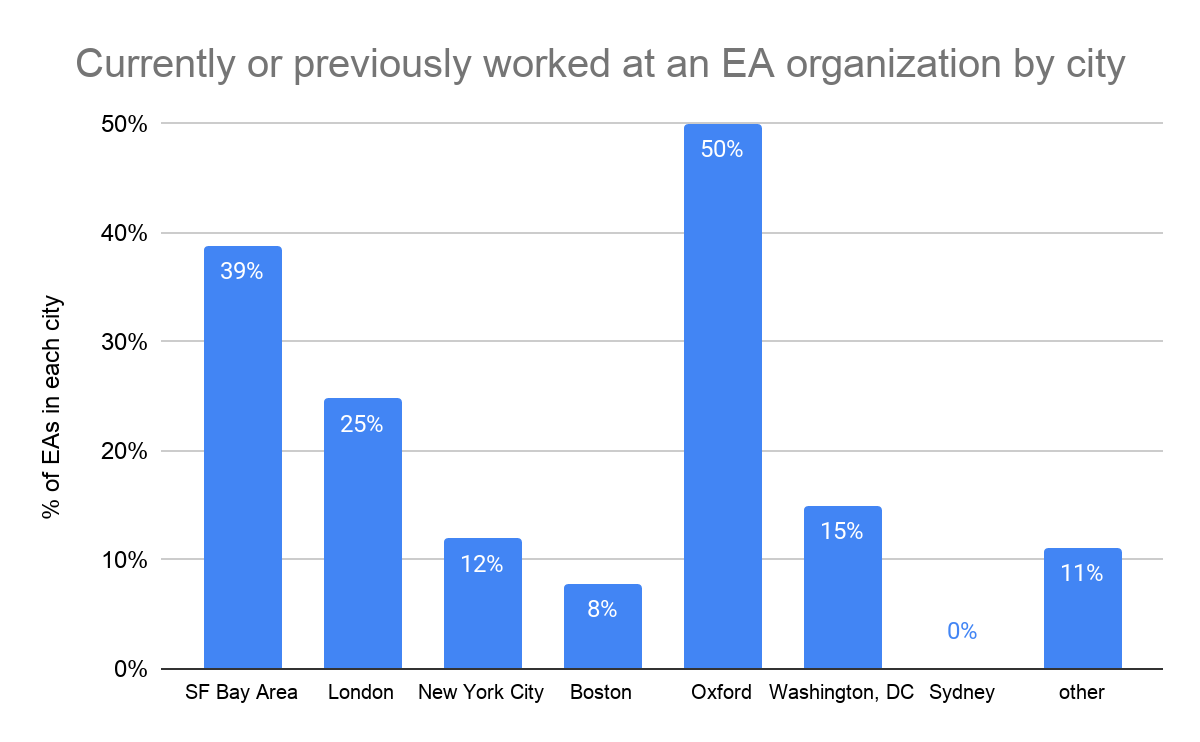 We have shown elsewhere that most effective altruists are on the Left or Center Left, and there is interest in how Effective Altruists can be welcoming to conservatives, specifically Republicans. Depending on the country, the meaning of Left and Right can vary, or not even be a salient political dimension. We should once again highlight that our data only shows where an EA lives and so an EA reporting both living in the USA and being on the Right-hand side of the political spectrum does not mean they are a registered Republican for example. Over 75% of EAs in all major regions reported being on the Left or Center Left. 3% of EAs living in the USA reported being affiliated with the Right or Center Right. We can also see that the share of EAs affiliated with Libertarianism is highest among EAs living in the USA. 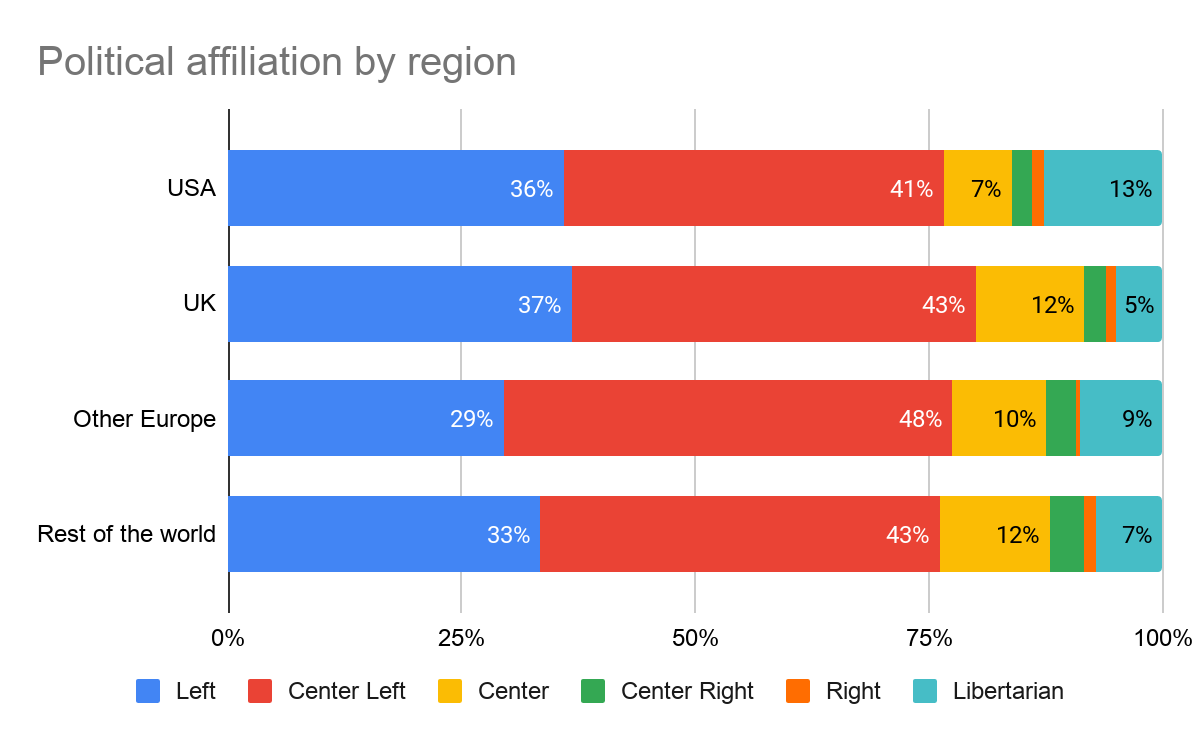 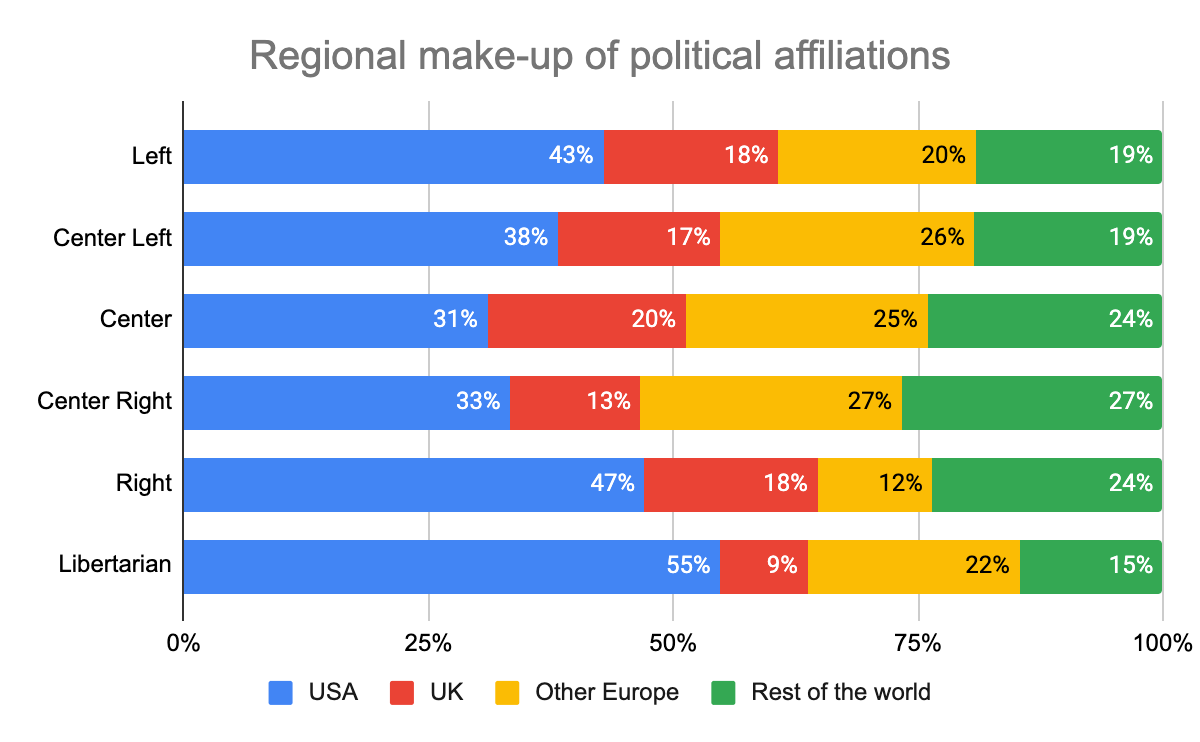 Like the EA survey as a whole, there are more male than female EAs across each region and major EA metropolitan hub.[5] 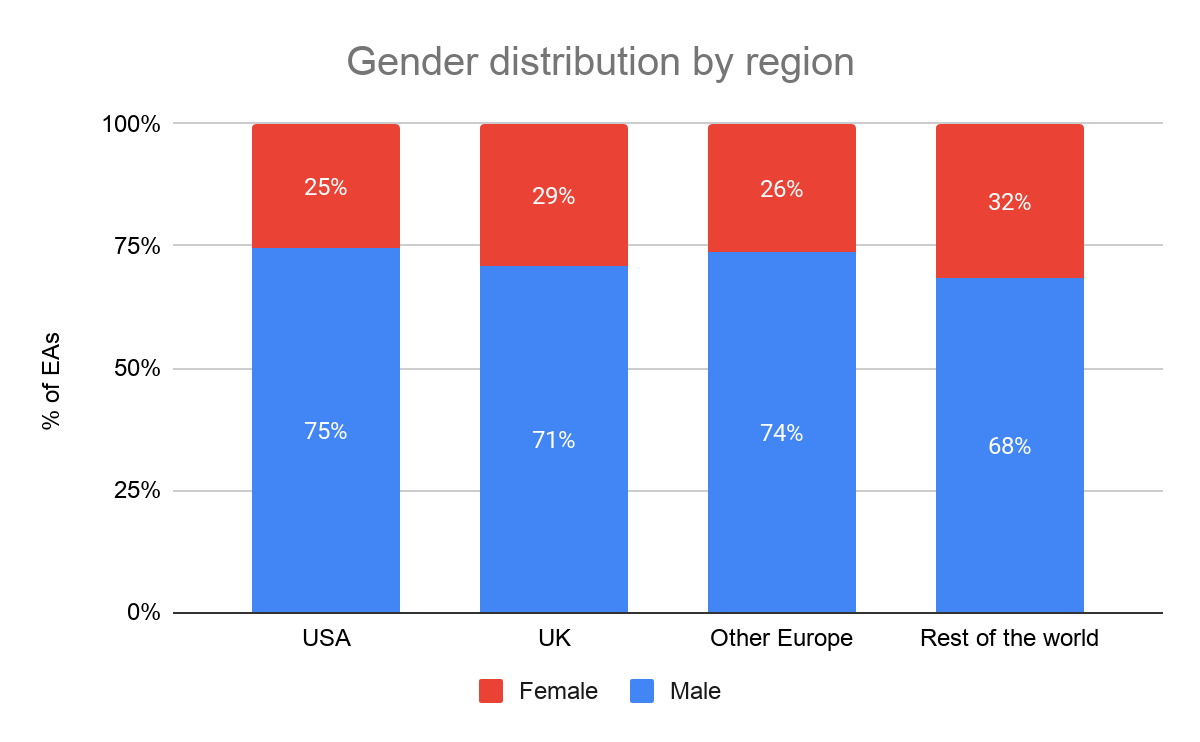 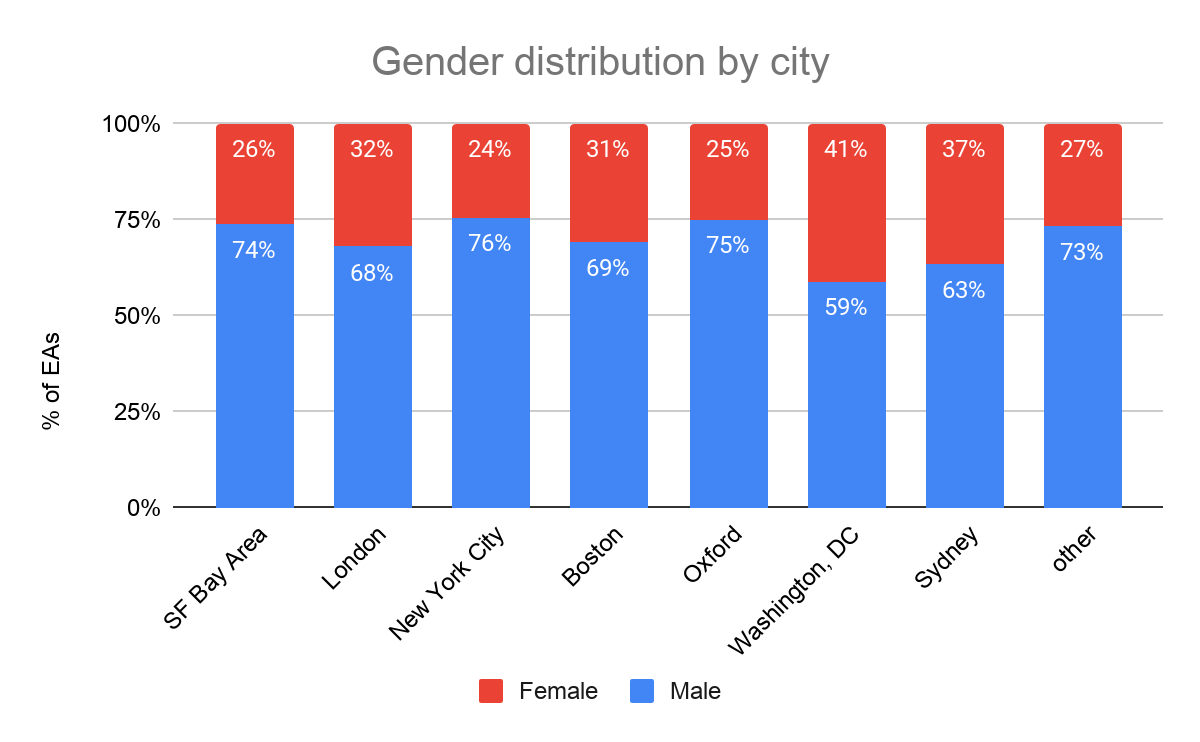 Those who eat meat and those that abstain from eating meat are present in roughly equal amounts overall in the survey. 46% claim to be vegan or vegetarian, while 48% consume meat of some form. 58% of EAs living in the USA eat meat of some form, though 35% are trying to reduce meat consumption and 6% are pescatarian. Rates of veg*nism are highest among EAs who live in Europe (59% in the UK and 60% elsewhere in Europe). EAs living outside of Europe and the USA more closely resemble EAs in the USA in terms of dietary preferences. 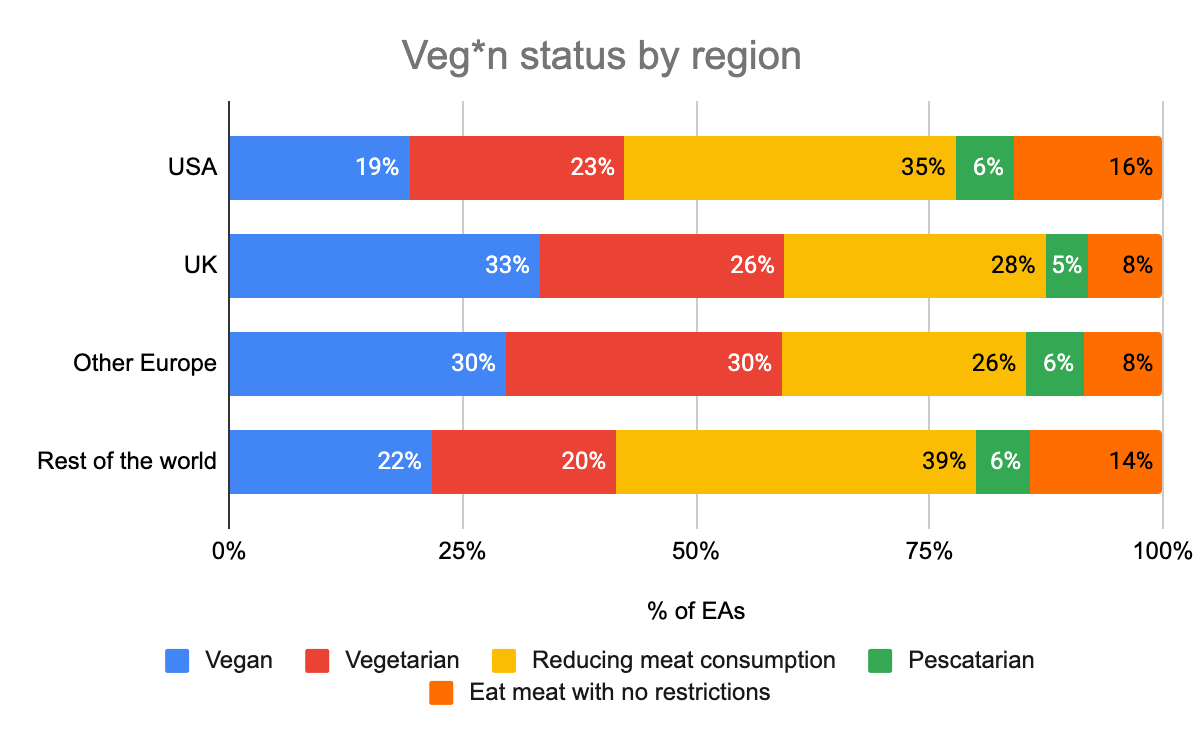 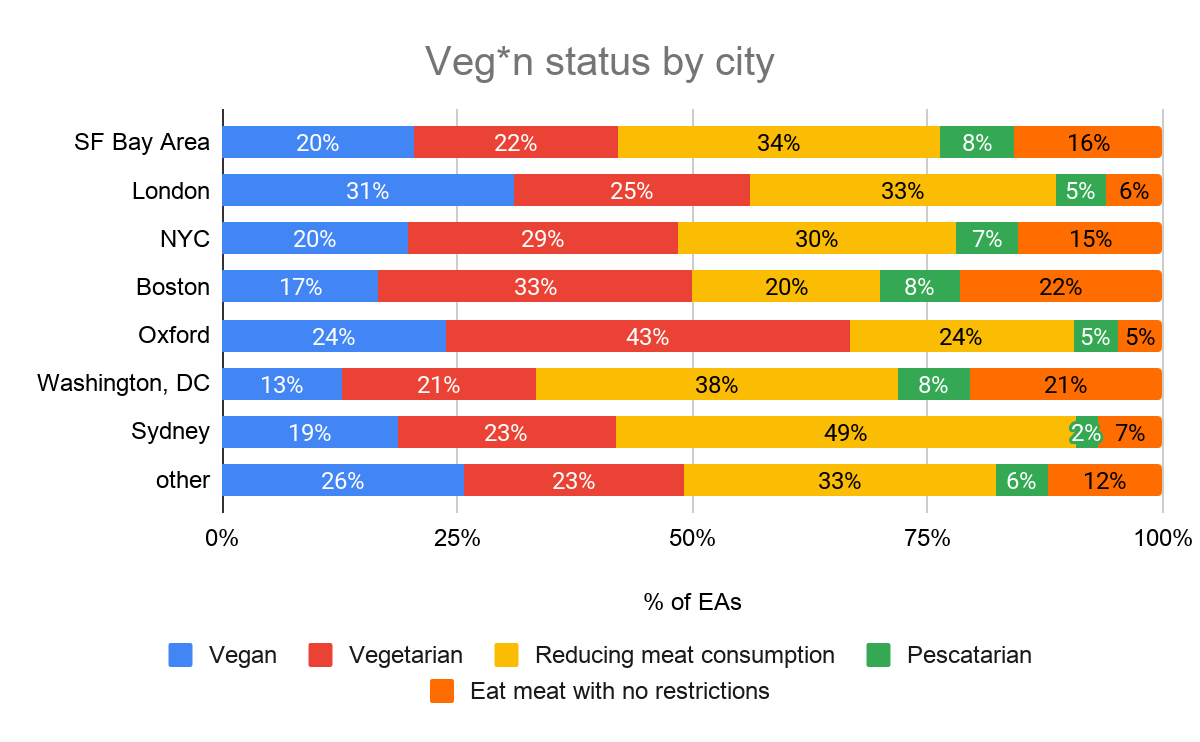 The top five causes, as ranked by EAs in the survey, are Global Poverty, Cause Prioritization, AI Risk, Climate Change, and Biosecurity in that order. We can clearly see in the table and figure below of the mean ratings of cause areas (ranging from (1) this cause should not receive any resources to (5) this cause should be the top priority)[6] that EAs living outside of the USA appear to give more priority to Cause Prioritization than EAs in the USA. EAs living outside of the USA and Europe appear to favour Global Poverty and Climate Change more than those living in these regions. This may be related to newer EAs tending to live outside of these regions and also tending to prioritize different causes than veteran EAs, although it is unclear how strong this association is. 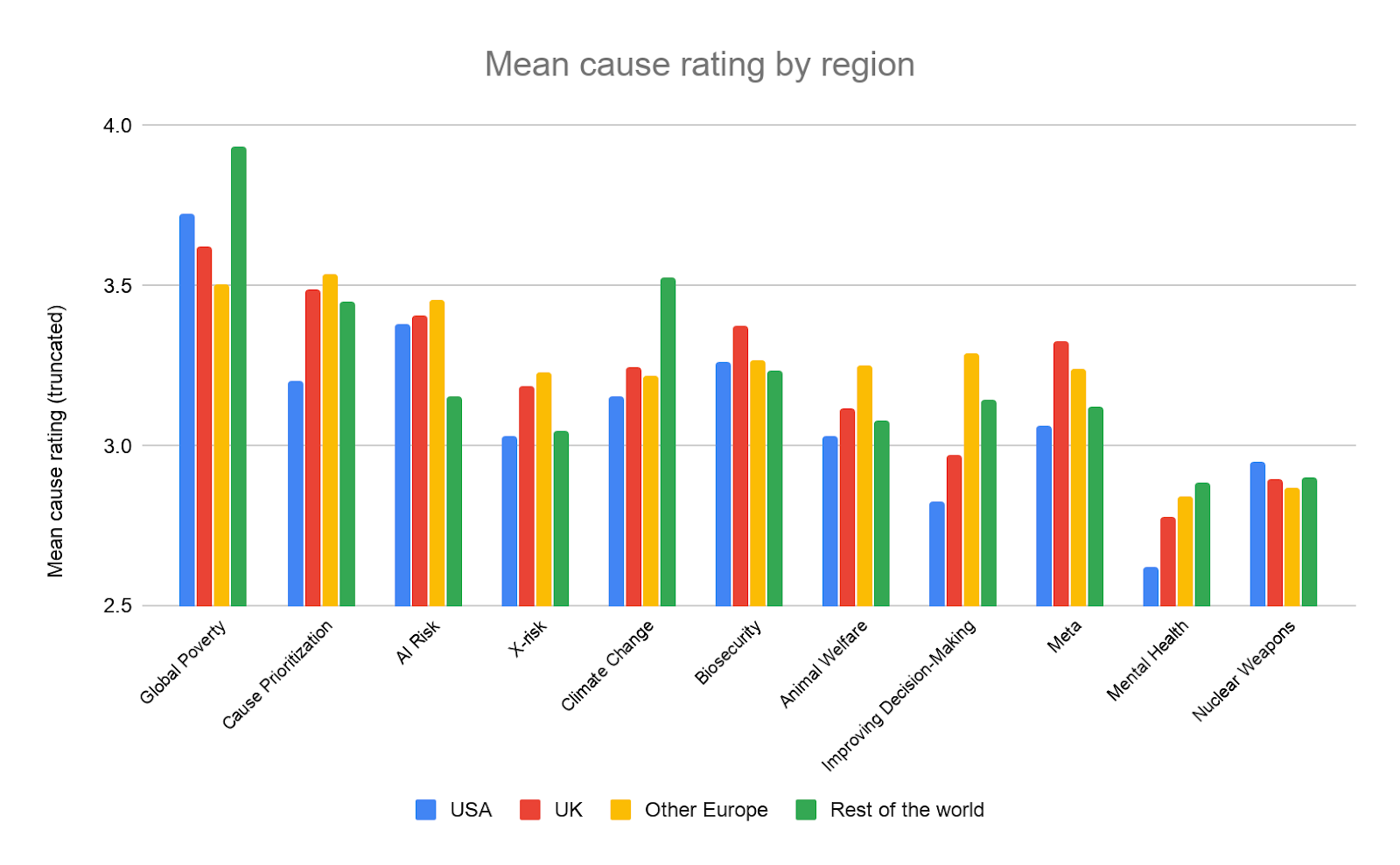 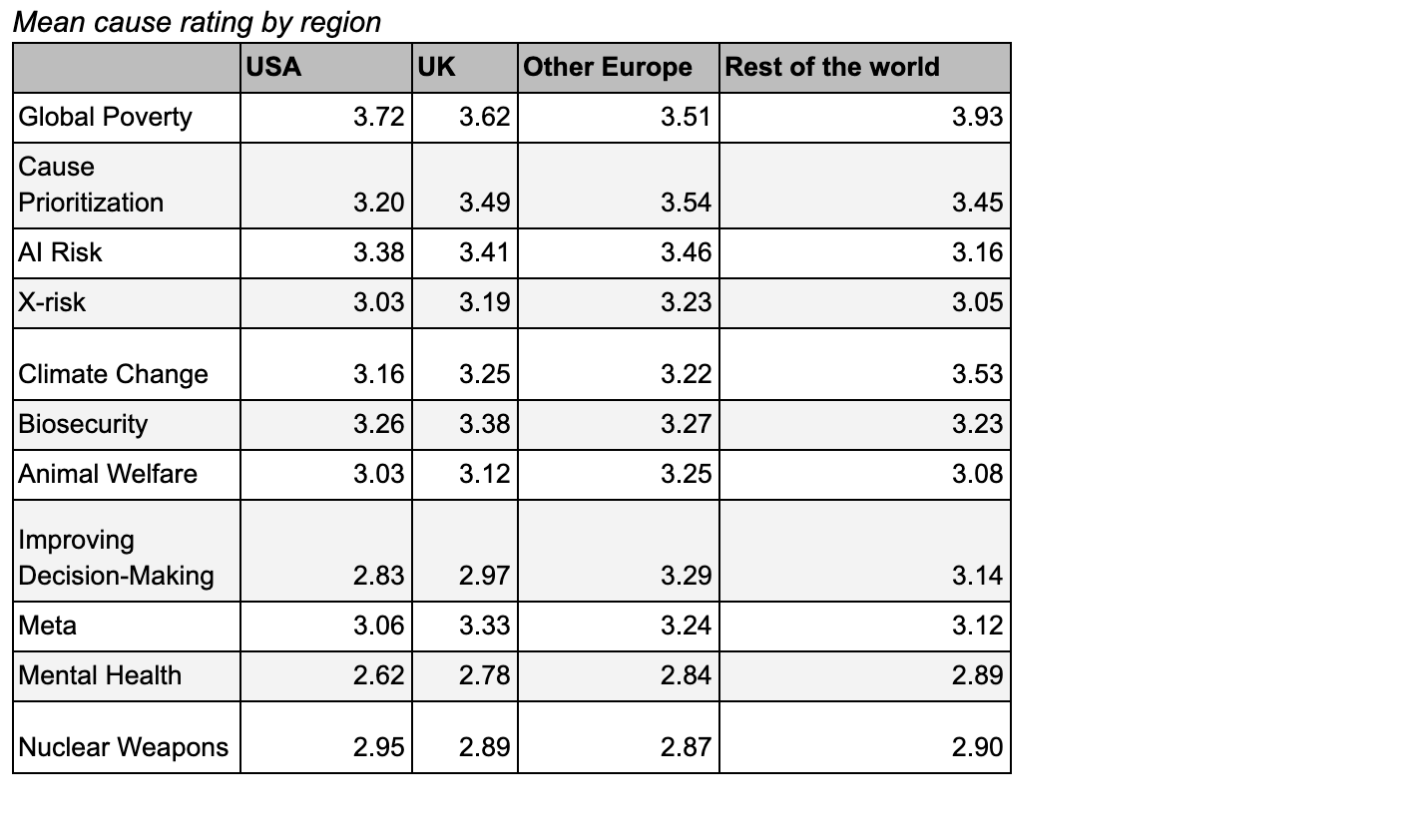 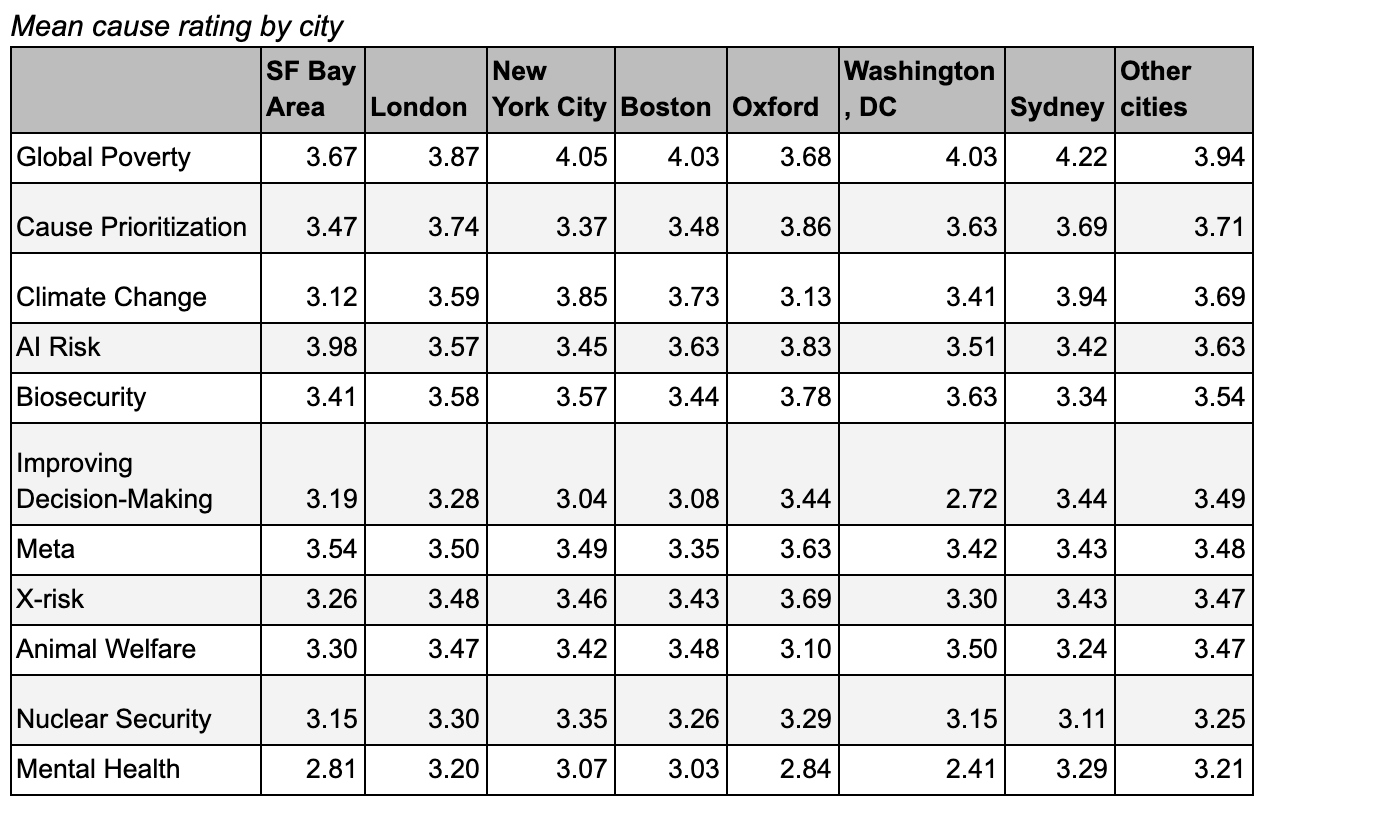 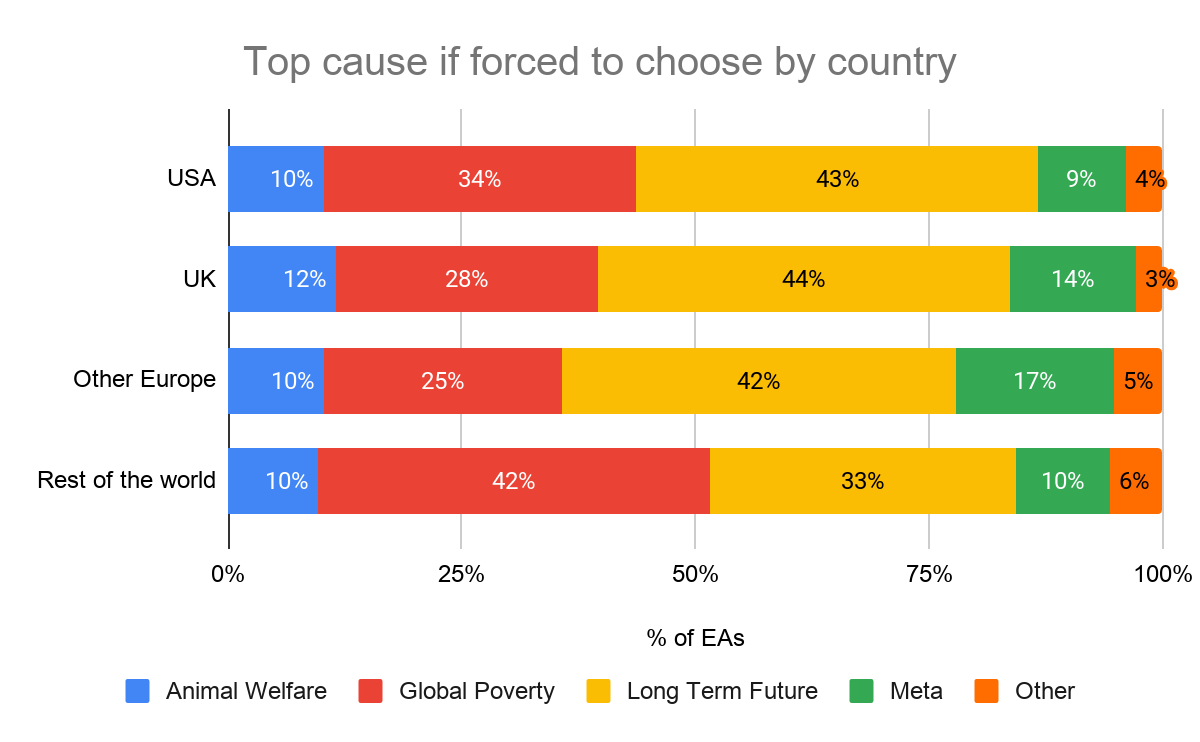 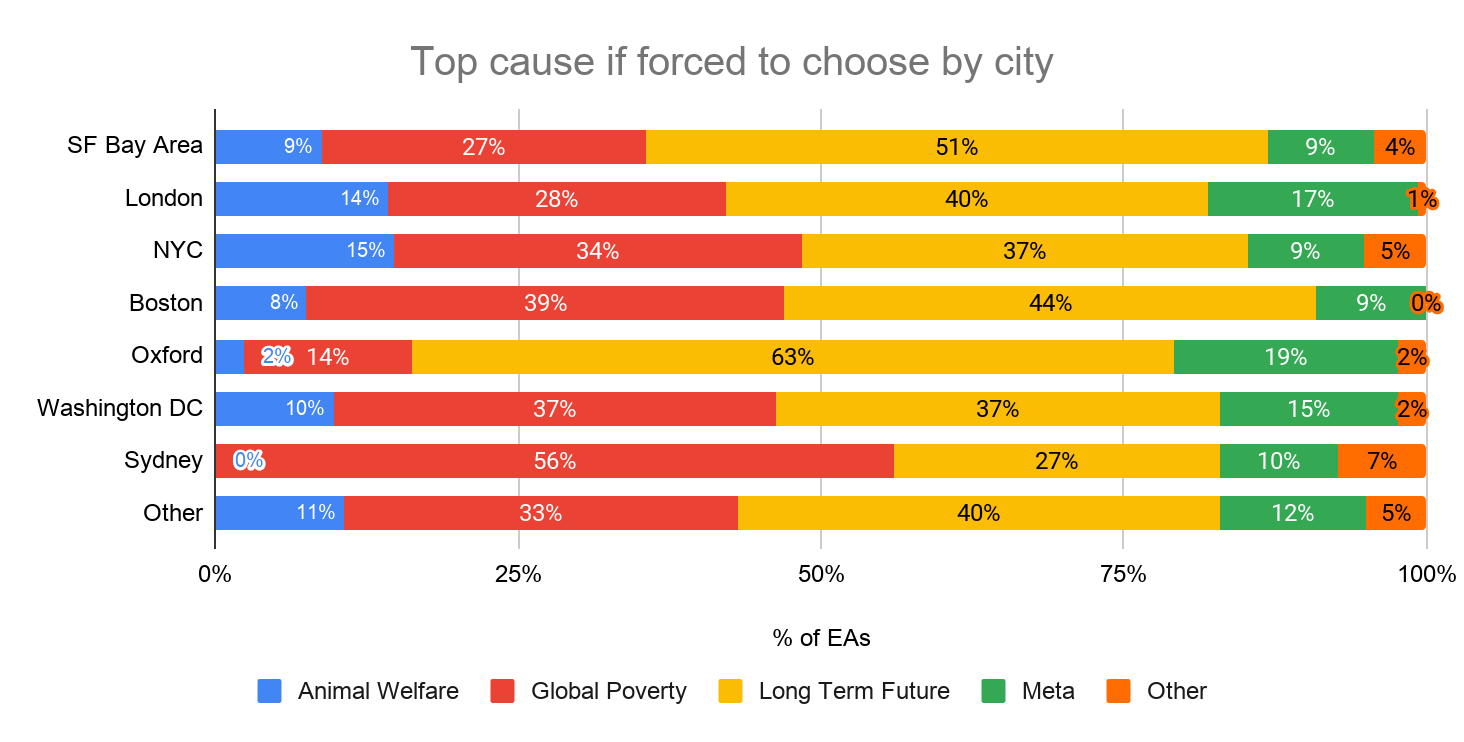 This essay was written by Neil Dullaghan. Thanks to David Moss, Kim Cuddington ,Peter Hurford and Jason Schukraft for comments. Thanks also to David Kristoffersson in the comments below.

"This could be a sign that many EAs drop out within 1-3 years of first involvement" Or perhaps they've simply chosen not to take part in the survey.

I don't think that really explains the observed pattern that well.

The explanation that this is due to EAs disproportionately drop out during their first 3 years seems to make straightforward intuitive sense.

In general, I expect the observation may have more than one explanation, including just random noise, but I think higher rates of dropout among particular more recent cohorts makes sense as an explanation, whereas these people specifically being more likely to take the EA Survey in 2018 and not in 2019 doesn't really.

The long term future is especially popular among EAs living in Oxford, not surprising given the focus of the Global Priorities Institute on longtermism

Even more than that, The Future of Humanity Institute has been in Oxford since 2005!

Good point! Thanks. I have added FHI to the text.

1.4% of EAs live in global population hubs China and India, which is even more than in the entire continents of Africa or South America (~1% each)

Very minor note, but "the entire continents of Africa or South America" sounds big, but they're each smaller by population that of either China or India.