Frontpage
EA Interview Series, January 2016: Perumal Gandhi, Cofounder of Muufri
How did you get involved with animal advocacy?
What led you to co-found Muufri?
How did you get involved in EA? In particular, what's kept you interested after hearing about it?
What inspires you most about your work?
What is your day to day work like? (And what’s the best part of your day to day work? What’s the worst?)
What aspect of being an EA do you struggle with the most?
What are your hobbies/what do you do outside of work?
What is your vision for animal advocacy? Are there any projects you're particularly excited about outside of cellular agriculture?
What have you done in your job (or a previous one) that you’re most proud of?
How would you like to continue to grow as an EA?
Do you have any role models, in effective altruism or elsewhere?
7 comments 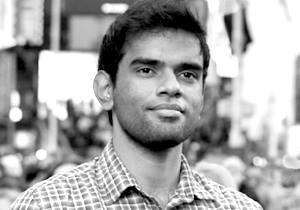 The EA Interview Series celebrates the amazing efforts of people in our community. We hope this reminds us of our wonderful achievements thus far and provide newcomers with a personal understanding of our community.

In this interview we want to highlight the work of Perumal Gandhi, a leader in the push to help the animals who are abused and slaughtered for food. Perumal co-founded Muufri, a company paving the way for cellular agriculture (meat, eggs, dairy, and other animal products made with cell cultures rather
than animal farming).

Muufri's goal is to produce animal-free milk, which is likely the most tractable cellular agriculture food product. Because it doesn’t require building tissues like cultured meat does, animal-free milk can be produced more easily by utilizing technology initially developed to produce medicines like insulin. Muufri has raise millions in funding to apply this method to producing milk, and they’ve already made prototypes! Cellular agriculture is an exciting project that could play a crucial role in ending the exploitation of animals.

Perumal is relatively new to the effective altruism community, but, like many others, he’s been thinking about “doing the most good” for a long time and is happy to belong to a community centered on that idea.

How did you get involved with animal advocacy?

I used to be a carnivore that believed the “your meat comes from small family farms that take excellent care of their animals” story. But one day, while I was walking back home from school (6th grade) a volunteer from PETA handed me a pamphlet on the industrial farming of chickens. And it showed me, in gruesome details, the reality of how we produce our meat. That basically caused me to quit meat overnight and I turned vegetarian. A few months later we got a dog into the family, and I slowly started to observe that animals are sentient beings that can feel pain, anger, fear, and love. All of the above set the stage, but what got me into animal advocacy completely was the experience of being bullied extensively for a few years. It shifted my view on life and allowed me to view what we were doing to animals as pure bullying. And I decided that the cause that attracts me the most is standing up for the billions of voiceless sentient beings that we have on planet earth.

What led you to co-found Muufri?

Once I got into animal advocacy completely, I started volunteering a lot at various animal organizations and shelters throughout my high school and undergrad years. After volunteering for a few years – doing everything from cleaning the shelter to driving the animal ambulance to giving street animals medical care to trying to convince people to eat less meat – I realized that while helping animals on a one-on-one basis was gratifying, it wasn’t solving the root problem i.e., people love meat, dairy, and eggs. I had also come across Prof. Mark Post’s work on cultured meat at that point, and something just clicked in my brain. If we could produce the same animal products that people love without using animals, we’d all win! So I left India to do my masters in Tissue Engineering in the US, since there were no such opportunities in India. During my master’s work I realized that the technology for cultured meat is still nascent, and I started looking into alternatives i.e., what other animal product can we produce today, using a technology that’s already quite mature. The answer turned out to be milk, and that’s how Muufri started. (For our founding story, check out Isha’s blog post on us.)

How did you get involved in EA? In particular, what's kept you interested after hearing about it?

Through Eitan from Stanford! He is an EA, and he introduced me to the world. What’s kept me interested is that every person I’ve met in the EA world is both highly logical in thinking and serious about making the world a better place. That’s quite rare – especially the latter, since most people in the world don’t bother about making the world a better place – and it made me respect anyone who becomes a part of the EA movement. So it’s a shared view of looking at the world that’s kept me interested.

What inspires you most about your work?

Two things inspires me the most about my work:

A roller coaster ride! It’s never the same – some days are full of work, others are really boring since the ball is in other folks’ hands.

The best part is the raw amount of learning. Because of which I honestly know a ton about biotech as a field; I know how a company really works and the importance of all the various departments.

The worst part is the uncertainty and fear of failure. I’m not scared of failure in itself – it’s how we learn and grown. But, so many people have placed their faith in us and expect us to succeed that failure would feel like we’re letting them down.

What aspect of being an EA do you struggle with the most?

The biggest thing I struggle with is the constant fight between my rational side - that is the real EA - and the emotional side. From buying stupid things that I don’t need to giving money to charities that aren’t as effective as others, I struggle to be as rational as possible while making decisions, and every now and then I make emotional decisions that I later regret.

What are your hobbies/what do you do outside of work?

Outside of work I volunteer at the local animal shelter, do Sudoku puzzles, learn stock investing, cook fancy food, and hit the gym. I’m also trying to learn how to be more mindful through meditation.

What is your vision for animal advocacy? Are there any projects you're particularly excited about outside of cellular agriculture?

My vision is that one fine day there’ll no longer be any need for animal advocacy!

What have you done in your job (or a previous one) that you’re most proud of?

Well, one of my side jobs is investing in the stock market. While in India two years ago, I had made some, sizable - for a college student - investments which finally increased in value and gave me a 3x return a few months back. I had made that investment at a time where most people were selling the stock like crazy because of a lot of bad press about the company. After I invested, the value kept going down, and I wanted many a times to sell it and cut my losses, but I had the emotional fortitude to hold onto it since according to the raw numbers the company was doing well even though there was a lot of bad news and fear mongering about it in the news. Holding onto the stock and going against my emotional self successfully is something that I’m proud about.

How would you like to continue to grow as an EA?

I’ll admit honestly that I’m a horrible EA. While I donate a good bit of my earnings, I also spend a lot of my money buying stupid, stupid stuff that I really don’t need! And I love good food, so a good chunk of my money goes there as well. So one of my goals is to be more financially prudent this year to allow me to give more. I’m also stupidly emotional and many times donate to charities that do more for one animal or person for the feel good feeling that I get, rather than give it to the most effective charities i.e., emotions over logic. So, that’s also on my list of things to do.

Do you have any role models, in effective altruism or elsewhere?

My role models are mostly from outside the EA world since I’m so new to it!

I could honestly keep going about my role models in life for pages and pages! I find that I have a role model for anything and everything i.e., if I meet someone, even if they have just one quality that I admire and respect, I add them to my list of role models and try to emulate them on that aspect.

Thanks for your time, Perumal. It’s great to hear about your inspiring story, and we’re excited to follow Muufri’s progress as well as the broader field of cellular agriculture. Just to let readers know, Perumal is happy to be contacted with questions at perumal@muufri.com.

The EA Interview Series is currently produced by Jacy Reese, research associate at Animal Charity Evaluators, and Nicole Ross, operations associate at GiveWell. Disclaimer: the views expressed above are those of Perumal, Jacy, and Nicole, not their employers. We hope to continue producing one interview each month, as a way to highlight the incredible work being done in our community. There’s a good chance the people running this project will change over time as people have shifting availabilities. This is the second interview we’ve done in this project. The first one, with Michelle Hutchinson of Giving What We Can, can be found here.