You can sign up for this newsletter on substack, or browse past newsletters here. If you have a content suggestion or want to reach out, you can leave a comment or find me on Twitter.

Kalshi hosted a competition to predict congressional races (a). If someone predicts all races correctly, they get $100k, otherwise the most accurate person will receive $25k. To be clear, this is a marketing gimmick, and participants make Yes/No rather than probabilistic predictions. But I thought I'd report on it given the high amount.

As Metaculus continues to build capacity, they have started to launch several initiatives, namely Forecasting Our World In Data (a), an AI forecasting team (a), a "Red Lines in Ukraine" (a) project, and a "FluSight Challenge 2022/23" (a). They are also hiring (a)

Metaculus erroneously resolved (a) a question on whether there would be a nuclear detonation in Ukraine by 2023.

An edition of the Manifold Markets newsletter (a) includes this neat visualization of a group of markets through time:

Manifold's newsletter (a) also has further updates, including on their bot for Twitch. They continue to have a high development speed.

The US midterm elections were an eagerly awaited event in the prediction market world. Participating so as to make a profit requires a level of commitment, focus and sheer fucking will that I recognize I don't have. For coverage, interested readers might want to look to StarSpangledGamblers (a), or check on the Twitters of various politics bettors, such as Domah (a), Peter Wildeford (a) or iabvek (a).

My forecasting group, Samotsvety, posted an estimate of the likelihood that Russia would use a nuclear weapon, including a calculator so that people could more easily input their own estimates. This was followed by the Swift Institute (a), and both estimates were reported in WIRED magazine. Since then the probability seems much lower, as the strategic situation becomes clearer.

Some more pessimistic forecasts by Max Tegmark (a) were seen by Elon Musk, and may have played a role in Musk’s refusal (a) for Ukraine to use his Starlink service over Crimea.

One of the sharpest prediction market bettors objected to the above estimates, and I followed up with some discussion.

Superforecaster Anneinak correctly goes with her gut—in contraposition with the polls—on the Alaskan Congressional elections (a).

An academic initiative by the name of CRUCIAL (a) is looking at predicting climate change effects using prediction markets.

The Council on Strategic Risks (a) is hiring for a full-time Strategic Foresight Senior Fellow (a), and is offering $78,000 to $114,000 per year plus benefits. My impression is that this post would be impactful and policy-relevant.

The $5k challenge to quantify the impact of 80,000 hours' top career paths (a) is still open, until the 1st of December. So far I only know of two applications, and since the pot is split between the participants, participation might have a particularly high expected monetary value.

Katja Grace looks at her calibration in 1000 predictions (a): 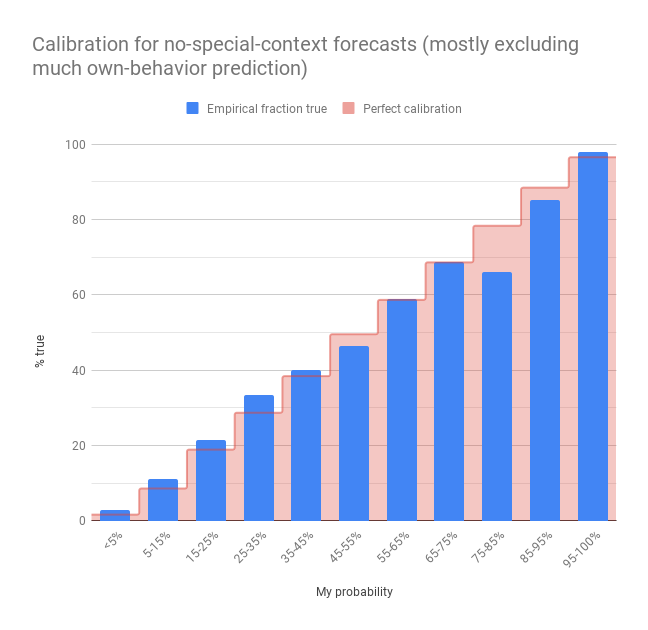 Callum McDougall writes Six (and a half) intuitions for KL divergence (a).

Terence Tao has two (a) introductory blogposts (a) on Bayesian probability theory.

Note to the future: All links are added automatically to the Internet Archive, using this tool (a). "(a)" for archived links was inspired by Milan Griffes (a), Andrew Zuckerman (a), and Alexey Guzey (a).

> In 1646, Magnenus estimated the number of atoms contained in a piece of incense from an argument based on the sense of smell (if a fraction of the grain is burned, the number of particles can be estimated from the volume within which the scent is still perceptible). His estimate for the number of particles in a piece of incense "not larger than a pea" was of the order of 10^18. This estimate is remarkably accurate, within about three orders of magnitude of the true value (based on the number of molecules in the unburned incense) and thus only one order of magnitude off in linear dimension of the molecule. Magnenus was by far the earliest scholar to give a reasonable estimate for the size of a molecule, the first "modern" estimate was given more than 200 years later, in 1865, by Josef Loschmidt