My definition of value :

I need help with various aspects of my main project, which is to develop an open-source collective decision app, http://www.vodle.it :

I donate monthly to charities collectively chosen by my colleagues and friends, for four reasons:

So far, most of those donations went to public health charities like Doctors Without Borders or Malaria Consortium. If you want to have a say where my November donation goes: demo.vodle.it

Reply
Decision making under model ambiguity, moral uncertainty, and other agents with free will?
Answer by Jobst Heitzig (vodle.it)Nov 13, 202210

I forgot to add that there are of course also approaches based on regret.

Then Savage's minimax regret criterion demands one should choose that S which minimizes maxr(S). The advantage over the Hurwicz criterion is that the latter only looks at the two most extreme scenarios, which might not be representative at all of what will actually happen, while Savage's criterion takes into account the available information about all possible scenarios more comprehensively.

Obviously, one might combine the Hurwicz and Savage approaches into what one might call the regret-based Hurwicz or Savage–Hurwicz criterion that would demand choosing that S which minimizes h maxr(S) + (1–h) minr(S), where h is again some parameter aiming to represent one's degree of ambiguity aversion. (I haven't found this criterion in the literature but think it must be known since it is such an obvious combination.)

Reply
Six Ways To Get Along With People Who Are Totally Wrong*
Jobst Heitzig (vodle.it)1mo1

This is tremendously helpful!

I personally sometimes have an anger problem. Curiously it mostly happens is someone I love seems to be obviously wrong in a recurring way.

I believe part of the reason that I then sometimes get angry is that it may then seem that the person I love might be less worthy of my love because of their seemingly silly opinion or behaviour. At the same time, I then notice that such a thought of mine is itself silly, and that makes me angry at myself. But in such a situation, I can't admit that I'm angry at myself, so I end up acting as if I was angry at the other person.

One thing that seems to help me most of the time is the buddhist "loving kindness" exercise, as for example explained here.

I think you are right, and the distinction still makes sense, but only as a theoretical device to disentangle things in thought experiments, maybe less in practice, unless one can argue that the correlations are weak.

I think you point to relevant tradeoffs here. I myself am currently testing a different scheme to determine my donation: let the public (or anyone interested in participating) decide collectively where to donate. I believe this might...

The downside is probably that the total effort spent in this decision is larger than would I take it on my own...

What do you think of this?

I like this type of models very much! As it happens, a few years ago I had a paper in Sustainability that used an even simpler model in a similar spirit, which I used to discuss and compare the implications of various normative systems.

Abstract: We introduce and analyze a simple formal thought experiment designed to reflect a qualitative decision dilemma humanity might currently face in view of anthropogenic climate change. In this exercise, each generation can choose between two options, either setting humanity on a pathway to certain high wellbeing after one generation of suffering, or leaving the next generation in the same state as the current one with the same options, but facing a continuous risk of permanent collapse. We analyze this abstract setup regarding the question of what the right choice would be both in a rationality-based framework including optimal control, welfare economics, and game theory, and by means of other approaches based on the notions of responsibility, safe operating spaces, and sustainability paradigms. Across these different approaches, we confirm the intuition that a focus on the long-term future makes the first option more attractive while a focus on equality across generations favors the second. Despite this, we generally find a large diversity and disagreement of assessments both between and within these different approaches, suggesting a strong dependence on the choice of the normative framework used. This implies that policy measures selected to achieve targets such as the United Nations Sustainable Development Goals can depend strongly on the normative framework applied and specific care needs to be taken with regard to the choice of such frameworks.

The model is this: 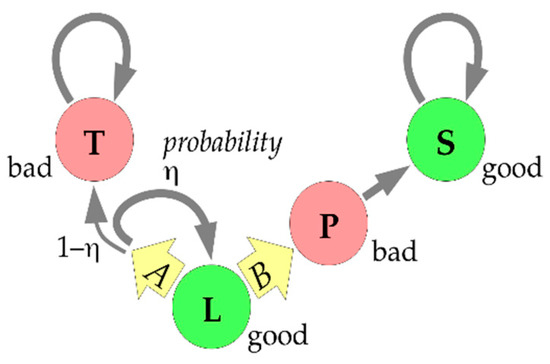 Here L is the current "lake" state, from which action A ("taking action") certainly leads to the absorbing "shelter" state S via the passing "valley of tears" state P, while action B ("business as usual") likely keeps us in L but might also lead to the absorbing "trench" state.

The names "lake", "shelter", "trench" I had introduced earlier in another paper on sustainable management that contained this figure to explain that terminology:

(Humanity sits in a boat and can row against slow currents but not up waterfalls. The dark half is ethically undesirable, the light half desirable. We are likely in a "lake" or "glade" state now, roughly comparable to your "age of perils". Your "interstellar" state would be a "shelter".)

Longtermist regress IS EITHER Contraction OR Average wellbeing decrease,

but consider a certain baseline trajectory A on which

so that their expected product equals 9 gazillion utils, and an uncertain alternative trajectory B on which

Then an event that changes the trajectory from A to B is a longtermist regress since it reduces the expected utility.

expected utility, and its main factors, expected number of people, and expected value per person

but that is only true if number of people and value per person are stochastically independent, which they probably aren't, right?

Thank you so much, this is especially helpful for a newbie like me who was a little confused about these things and now thinks that is mainly to do with terminology.

Just to clarify: In this text, are "welfare" and "utility" referring to same concept, or are they just proportional to each other because of the unitarianist assumption?