A lesson from an EA weekend in London: pairing people up to talk 1 on 1 for 30 mins seems to be very useful

Event Strategy
Frontpage
A lesson from an EA weekend in London: pairing people up to talk 1 on 1 for 30 mins seems to be very useful
Saturday
Sunday
Application forms
17 comments

We organised an EA weekend in London for people who are already familiar with EA. A review of CZEA "Intense EA Weekend" retreat was helpful to us so I am sharing the lessons we learned as well.

Main lesson: 1 on 1s seem to be very useful

Event descriptions and lessons from running them

"How to talk about EA" workshop

Main lesson: 1 on 1s seem to be very useful

We experimented with various event formats. In a feedback form we asked to rate how useful each event was (for having a greater positive impact) on a scale of 1 to 10. According to the feedback, the most valuable event was pairing people up to talk 1 on 1 for 30 minutes: 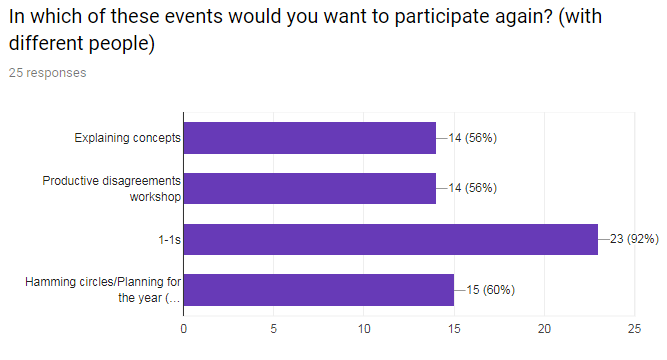 This is consistent with feedback from group leaders' retreat where 1 on 1s were voted to be the most valuable activity on most days. What is more, when asked what the most enjoyable part of the weekend was, six respondents answered that it was 1 on 1s (the most common answer).

We gave each of the participants a piece of paper with a list of questions to ask each other to jump-start the conversations. I think we told them that asking the questions was optional. The questions may have helped to avoid the fear of running out of topics to talk about, even if they weren't used directly. We tried to pair people who don’t know each other well and have something in common.

The rest of this post does not contain anything important but could be useful to people who are organising similar events.

30 people attended on at least one of the days (excluding 4 organisers). 25 attendees filled the feedback form. One of the questions was: 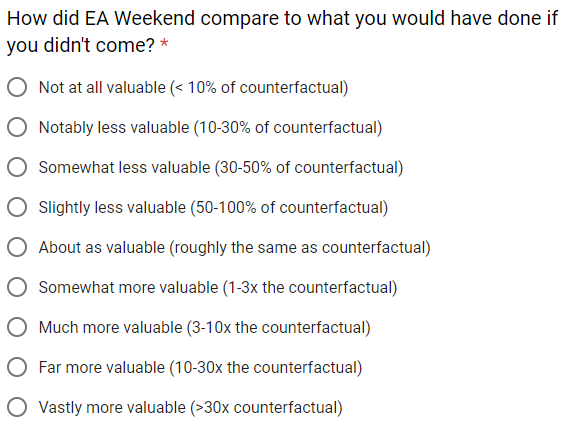 Here are the results:

It’s unclear how good people are at answering such a difficult question but overall, the event seems to have been successful.

You can see a full summary of responses to the feedback form here. It includes answers to some free text questions that are not discussed in this post. 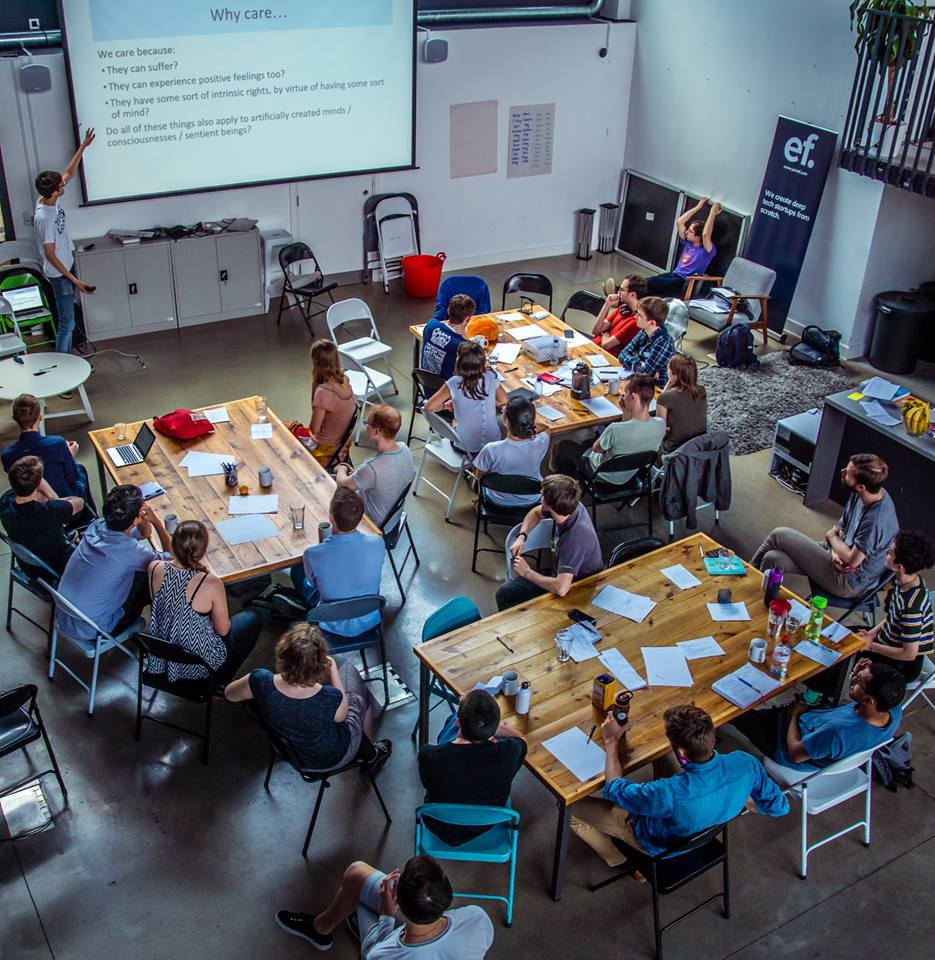 10:25 - 11:00 Group loving-kindness meditation or discussion in another room

Slides from the event can be seen here.

Event descriptions and lessons from running them

Everyone had 1 minute to introduce themselves. The purpose was for people who have something to talk about to know about each other. The following slide was shown to give people ideas on what to talk about:

Questions were ordered and picked in a way to make it less intimidating to talk. However, it caused many of the answers to be less informative. It would’ve probably been better to put questions like “What’s your plan for improving the world?” first. It was also difficult to hear what many people said partly due to bad acoustics. Two people wrote that they were uncomfortable introducing themselves. Overall, some online document or a sheet on the wall would have probably been better.

This is an idea we took from CZEA "Intense EA Weekend" retreat because this was rated as the most useful event at that retreat. The participants were asked to pick from a list of interesting concepts (e.g. scope insensitivity, optimiser’s curse) which ones they would like to have explained to them or explain to others. We used a different sheet from CZEA. Our sheet can be seen here. We asked people to divide into pairs or small groups and find different people when they hear a gong (every 15 minutes). We told that it is ok to skip topics if they don’t want to explain them or have them explain. According to the feedback, this was not a successful event.

This idea was taken from an event that was ran in New York and adapted for EA purposes. First, I gave a short talk on how to disagree productively. I then asked everyone to rate whether they "agree", "disagree" or are "unsure" on various controversial EA topics and give their opinions on the importance of various causes. A sheet of questions can be seen here (note that there are two tabs). We then asked participants to pair up, compare sheets, find disagreements and discuss. Every 15 minutes we asked everyone to find a different pair.

One piece of feedback about the event was: “Hard to find disagreement. Many statements were too hard to have a confident belief on.” I think another issue was that many people didn’t know enough about some of the topics to have meaningful discussions.

One idea was that explaining concepts and productive disagreements workshops could help people to have more productive discussions during 1 on 1s because it sets a tone of talking about EA topics. What is more, people could continue one of these activities during the 1 on 1s. Some people told me that events were successful in this regard. However, it still seems like overall they weren’t very successful.

This is the way discussions are organised at a philosophy meetup I occasionally attend. One mistake I made is not giving people a minute to think of topics to discuss. The only topics suggested were

We separated into three groups to discuss these. Discussions did not work too well, possibly because the groups were too big.

"How to talk about EA" workshop

We separated into 4 groups based on which subtopic we wanted to discuss. Subtopics were:

In the feedback form, two people mentioned that they’d rather this was a workshop (possibly a one that includes roleplay) rather than a discussion.

We publicly advertised an expression of interest google form. Purposes were:

Out of 57 people who filled the form, only 14 attended the event. This is partly because we publicized the form 2 months before the event but sent tickets only 2 weeks before the event because that’s when the availability of the venue was confirmed. Some people made other plans for the weekend because they weren’t sure if the event is going to happen. We had to send the tickets sooner with no venue specified. Many of the attendees came because we invited them personally 2 weeks before the weekend. Some of them also invited other people. There could have been many more attendees if we sent invitations sooner. However, it’s unclear whether it would’ve been easy to manage many more people.