From June of 2013 through May of 2018, the Department of Agricultural Economics at Oklahoma State University collected survey data (referred to from here as FooDs data) from roughly 1,000 different participants each month for a total of 61,845 participants. Respondents were weighted in terms of age, gender, education and region of residence to ensure a nationally representative sample of the US. The intent of the survey was to track consumer preferences for various attributes of food consumption including safety, quality and price. It also aimed to identify consumer awareness of and concern for a range of food and agriculture related issues.

All data sets and further descriptions of the survey questions and methods, as well as links to academic papers published using the survey data, can be found at the website of the Department of Agricultural Economics at Oklahoma State University. The specific data set used for this study can be downloaded here.

Several previous studies have analyzed the FooDs data in the context of veg*n rates over time (see this postby Animal Charity Evaluators) and the political distribution of veg*ns (see this post from Dr. Jayson Lusk). However, the ACE post does not account for partisanship and the post from Lusk does not account for time. Another relevant source is a recent Gallup poll of the U.S. in 2018 which breaks down vegetarian and vegan respondents by age, income and political ideology, but does not explore partisanship over time. They found that conservatives reported a 2% vegetarian and a 2% vegan rate, while liberals were at 11% and 5% respectively and moderates had 3% vegetarian and 1% vegan rates.This is roughly corroborated by the findings below. Another related article by Lusk looks at the relationship between political ideologies and various food ideologies, however this article mainly focuses on food beliefs not actual eating habits.

In response to the question, “Which political party do you most identify with?” roughly 42% said Democratic, 25% Republican, 29% Independent, 2% Tea Party and 3% Other. When asked “When it comes to politics, do you usually think of yourself as liberal or conservative?” the split was much more even as can be seen in Graph 1. This is partly because there were over twice as many moderate Democrats as Republicans and more conservative Democrats than liberal Republicans. It should be noted that these were the final two questions of the survey, so the previous responses are less likely to be motivated by political affiliation. 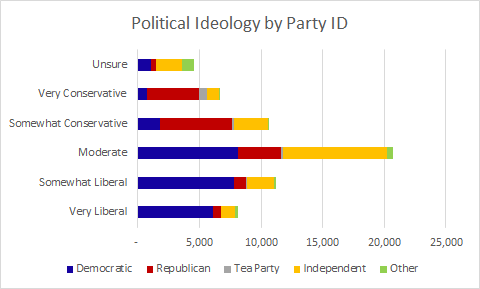 Respondents were also asked “Are you a vegetarian or vegan?” with only “Yes” and “No” as response options, so we can’t differentiate between vegetarians and vegans. For this reason I’ll refer to anyone that answered “Yes” as a veg*n.

Each respondent was given nine choice questions of the form displayed below. The food options were the same for each of the nine questions, only the price would vary.

Over the five year survey period, 3,649 (5.9% of total) respondents self-identified as veg*n. Yet, 2,180 (approx. 60%) of those veg*n respondents selected at least one meat option from the food choice questions.This is corroborated by the ACE study mentioned previously. It seems initially puzzling that such a significant portion of self-reported veg*ns would select meat options but I’ll offer three potential explanations for consideration. The first is that these “meat-purchasing veg*ns” were omnivores at a previous time and are selecting options based on what they would have consumed at that previous time. If the survey is about food choices, a veg*n respondent might be confused about how the surveyor wants them to reply, causing them to select a meat option based on prior purchasing habits. Another possibility is these respondents in fact do not eat meat and/or animal products but they purchase these products for their family members.A final possible reason is that meat-purchasing veg*ns are “flexitarians” who eat meat sparingly, but see themselves as closer to a veg*n than a non-veg*n and identify as such. For ease of analysis, I’ll define all respondents that identified as veg*n as self-reported veg*ns, those that identified as veg*ns but also selected a meat option as meat-purchasing veg*ns, and those that identified as veg*ns and selected only veg*n food options as filtered veg*ns.

Looking at the filtered veg*n response rates by ideology in Graph 5, we see that very liberal respondents remain more likely to be veg*n. However, the trendlines for very liberal and moderate respondents become negative at -0.22% and -0.09% respectively. One potential explanation for this shift is that the data for 2018 only includes the months of January to May, while 2013 data contains only June to December and years 2014 through 2017 have the full 12 months of data. So a seasonal factor could contribute to the increased number of meat-purchasing veg*ns in the first half of the year. The trend lines for the other ideologies remain positive, but mostly decrease except for somewhat conservatives. This behavior from the trendlines indicates that people are becoming increasingly more likely to self-identify as veg*ns but also continue to buy meat (or at least select hypothetical meat options in surveys).

When sorting by party ID, Graph 6 shows much less deviation between parties than there was between ideologies. This seems to suggest that very and somewhat liberal respondents make up large portions of the self-reported veg*ns in each party. We’ll examine this further but first I’ll note that again, all veg*n rates in Graph 4 are increasing. Respondents that selected “Other” for their Party ID have the highest trend rate of 0.85% per year, followed closely by Republicans at 0.63%, then Democrats with 0.25%, Tea Party respondents at 0.19% and lastly Independents at a slight increase of 0.03% annually.

Graph 9 shows that after filtering out meat-purchasing veg*ns, Independents and Others are relatively less affected than the other three parties. This suggests that Democrats, Republicans and Tea Party supporters were more likely to self-identify as veg*n but also select a non-veg*n food option. The annual trend lines for filtered veg*ns decrease for Democrats, Republicans and Others, while increasing slightly for Tea Party and Independent respondents. This supports the previous observation suggesting that people have become more likely to identify as a veg*n while continuing to purchase meat options.

* There were no filtered veg*n Tea Party respondents in 2018.

Conservatives were shown to have a higher annual trend than liberals in both self-reported and filtered categories. Somewhat liberal was the only ideology to increase trend after filtering meat-purchasing veg*ns out, suggesting that all other ideologies are growing more likely to self-report being veg*n while continuing to buy/select meat options. That same trend can be seen in Democrats, Republicans and Others below. Democrats have an annual trend less than half of Republicans when counting all self-reported veg*ns. After filtration, the trends become much closer with Democrats only 0.03% higher than Republicans. Another thing to note is the largest trends are being shown for Unsure and Other respondents, suggesting veg*nism is growing popular with fringe parties and non-committed political ideologists.

Conclusion and Direction for Future Research

There is a clear observable gap between the veg*n rates of liberals and conservatives, as well as between Democrats and Republicans. While this does begin to suggest a political divide over veg*n diets, there is evidence that the gap is not increasing. By some measures, the rate of veg*nism is rising more rapidly among conservatives and Republicans, showing that the gap could decrease over time. This is supported Gordon and Megan (2018) who posit, “With vegetarian and vegan diets becoming increasingly popular, social support will become more salient and presumably weaken the left-right divide in lapsing.”

The decrease in annual trend rates after filtering out omnivore veg*ns suggests that most parties/ideologies are reporting increasingly to be veg*n while continuing to select meat products. This could be an interesting point for further research to discover firstly, why so many people claim to be veg*n but also select meat options, and secondly, why that rate is increasing over time. Is it becoming more trendy to call yourself a veg*n even if you buy meat? Or have former veg*ns begun to buy meat but continue to call themselves a veg*n?

As stated previously, the rate of veg*nism can be a crude measure of concern for animal welfare but the FooDs data has two more concrete measures which could prove more insightful. The first comes from a ranking question at the beginning of the survey. Respondents were given twelve attributes of food products, including price, nutrition, environmental impact and animal welfare, and are asked to place four items in a “most important” category and another four items in a “least important” category. Seeing which party/ideology ranks animal welfare higher would be a clear indicator of concern. A second but less concrete way to elicit concern is found in the Food Issues section of the survey where respondents are asked on a scale from 1-5 how much they’ve heard or read about certain topics in the recent past. These topics include gestational stalls, farm animal welfare abuse and battery cages. While knowledge of a particular issue does not directly infer concern for that issue, it would be interesting to see how correlated knowledge of the issues and veg*n rates are.

Another method to observe the political divide over the farm animal welfare issue could be to incorporate voter data. Votes for presidential candidates are likely a more accurate measure of a person’s political inclinations than their responses in an anonymous survey. Observing veg*n rates by votes cast for either the 2016 election or the 2018 presidential approval rating could be quite revealing. Similarly, checking voting on farm animal welfare ballot initiatives (such as Prop 12 in California) by party could supply an accurate measure of concern as well.

This essay is a project of Rethink Priorities. It was written by Jacob Schmiess, who was an intern at Rethink Priorities. Thanks to Marcus Davis and Peter Hurford for their contributions. If you like our work, please consider subscribing to our newsletter. You can see all our work to date here.

Lusk, Jayson. “Who are the vegetarians?”. jaysonlusk.com/blog. September 2014.

Simcikas, Saulius. “Is the percentage of vegetarians and vegans in the U.S. increasing?”. Animalcharityevaluators.org. August 2018.

I am still confused about the 60% veg*ns who selected a meat choice. I found some further evidence for your hypothesis that many of those buy the meat for family members from Oklahoma State University's report on page 7:

Preceding the set of questions was the verbiage: “Imagine you are at the grocery store buying the ingredients to prepare a meal for you or your household. For each of the nine questions that follow, please indicate which meal you would be most likely to buy.”

Maybe if many of those veg*ns selected the hamburger, they confused it with a veggie burger? Though the 2013 veggie burgers didn't look at all like today's meaty veggie burgers, at least in Germany.

It's probably the lizardman constant showing up again -- if ~5% of people answer randomly and <5% of the population are actually veg*ns, then many of the self-reported veg*ns will have been people who answered randomly.

I think this is a good explanation of at least part of the phenomenon. As you note, where we do samples of the general population and only 5% of people report being vegetarian or vegan, then even a small number of lizardperson answering randomly, oddly or deliberately trolling could make up a large part of the 5%.