We are launching the Animal Advocacy Digest, a project aimed at collating and distributing the best research, news, and updates in animal advocacy on a bi-weekly cadence. Our goal with the project is to help people in the animal advocacy community quickly keep up with the most important information in the space even if they don’t browse the EA Forum or other sources daily. We’ll post the digest as an EA Forum post, as well as distribute it on this public email distribution - so you should sign up if you're interested! To start with, we'll only compile content posted on the EA Forum. This project will run as an experiment for 3 months, at which point we’ll evaluate how useful it is to users.

Without further ado, here are the following posts summarised in this digest:

Does the US public support radical action against factory farming in the name of animal welfare? By Neil Dullaghan (Rethink Priorities)

A US nationally representative survey by Rethink Priorities found  15.7% of respondents (N=2,698) supported a ban on slaughterhouses when presented with arguments for and against, and asked to explain their reasoning. Previous surveys by the Sentience Institute in the US found ~39-43% of people supported banning slaughterhouses, highlighting a large discrepancy.

Rethink Priorities suggests that previous polls which determined attitudes in response to broad questions (e.g. “I support a ban on slaughterhouses”) may not be accurate indicators of support for certain policies. These findings are notable for animal advocates as previous findings had been cited as support for bold reforms.

Neil also notes that for future research, it might be useful to test a radical ask (ban factory farming) and a moderate ask (labelling for cage-free eggs, say) each with a radical message ("meat is murder") versus a moderate one ("human/consumer welfare") somewhat similar to this paper.

A report by Animal Ask examines different subsidies reforms and how impactful these could be as campaign options for animal advocacy organisations. The five options examined are:

The authors say that they believe promoting welfare-conditional subsidies is the most promising campaign for animal advocacy organisations. They also believe reducing subsidies for meat production could be promising, however they suggest additional research to ensure that this doesn’t lead to an increase in the number of chickens (and overall animals) killed. They also note that they don’t believe options 3-5 above are promising campaigns, and encourage organisations to steer away from these options.

The Welfare Range Table is one of the first outputs of a (large) project by Rethink Priorities, to understand the relative capacities for welfare amongst different animals (e.g. what is the capacity for suffering and pleasure in chickens vs carp). This work examines the academic literature for 90 different traits, cognitive and hedonic, for 11 different animals and presents them via beautiful visuals (see below for the table on cognitive abilities).

The main take-away is that there is a lot we don’t yet know about the cognitive and hedonic capabilities of many animals, especially invertebrates and aquatic animals, but we do have a fair amount of information about prominently farmed species such as chickens and pigs. However, there was still a surprising amount of positive evidence on the cognitive abilities of the black solider fly, an insect that is commonly used in insect farming. 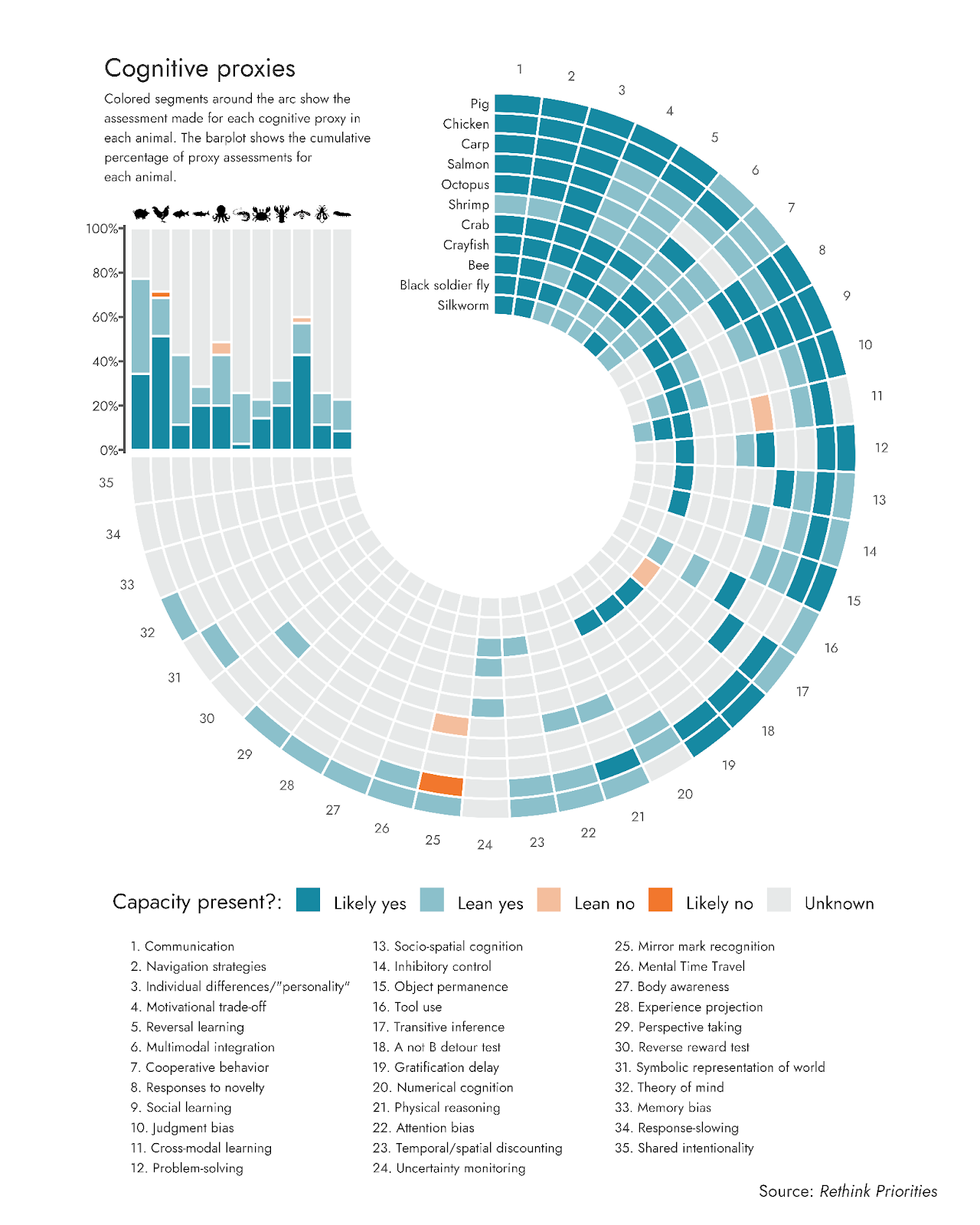 The third piece in the Moral Weights Project by Rethink Priorities. As the Moral Weights Project assumes hedonism (i.e. that well-being is purely made up of your positive and negative conscious experiences) is true, this post explains how their welfare range estimates might change if they assumed another theory of welfare. This post is quite philosophical so heads up for those who might not be that way inclined!

They argue that even though hedonic welfare might not be all of welfare, it’s likely to be a significant portion of it. They use the example of “Tortured Tim”, someone experiencing intense physical suffering who likely won’t be experiencing an overall positive life even with flourishing relationships, strong friendships and gaining knowledge. The end result is that they believe that their welfare ranges are only likely to change by a moderate amount (less than 10x) by assuming a different theory of welfare, such as desire satisfaction or object-list theory.

A report by Shrimp Welfare Project that looks at the various welfare issues present in the farming of shrimp globally. They find that some key welfare issues for shrimp are eyestalk ablation (removing the eyestalks of female shrimps to encourage breeding), disease, and stunning and slaughter (usually via immersion in ice slurry or asphyxiation).

The authors note that they’re quite confident that small to medium improvements in the factors above would lead to measurable improvement of shrimp welfare, which could be important given the 171- 405 billion shrimp farmed globally.

This research project looked at whether passing laws at the local levels helped to build momentum for passing state-level laws. The author finds that passing similar laws on a local level in multiple jurisdictions (e.g. several cities in a single state) appear to positively influence the creation of state laws. They also note that persistence is necessary, with most bills related to animal issues failing to pass on their first introduction.

Is improving the welfare of arthropods and nematodes underrated? - Vasco Grilo

Bonus summary of more interesting research from outside the EA Forum

A longitudinal study over three years that examines the impact of an intervention designed to increase awareness about the role of meat consumption in climate change, using a dataset of over 100,000 meals at a residential US College. Specifically, the paper finds that students that were assigned to a treatment group, where they watched a 50-minute talk on the impact of meat on climate change and their heath, reduced their meat consumption by 5.6 percentage points (~10%), which is sustained over three years. This is one of the more promising and robust study designs as it tested behaviour changes over a prolonged period of time, indicating that informational interventions might be quite a cost-effective way to help animals (given the five lectures cost only $233 for ~100 students).

Thanks for reading! As a reminder, you can get this digest as an email by signing up here. If at any point you have feedback, please send it to us at james.ozden [at] hotmail.com.

Great to see this! I've linked it now in the EAA Directory Resources page.

Thanks for this,
Just wanted to note a misframing of the slaughterhouse ban post.  You have written
"found ~40% supported banning slaughterhouses or said ‘don’t know / no opinion’ to questions, highlighting a large discrepancy"-which I think is taken directly from the latest "EA & LW Forums Weekly Summary"  rather than the slaughterhouse ban post.
This makes it seem like 60% opposed and then 40% combined EITHER supported or had no opinion, when in fact the 2017 Sentience Institute result was 43% supported, 11% chose don't know,  46% opposed.

I added the "when including those who chose no opinion/don't know" clause because  Sentience Institute's 2017 summary only reports the percentages agreeing out of those who either agreed or disagreed (47% agree with the ban, 53% disagree). But since many respondents selected “Don’t know” regarding the bans on slaughterhouses (11%), the overall percentages supporting these ban is slightly lower than their headline summary: 43% rather than 47%. In their 2020 replication, the same issue appears again when SI report a headline result of "44.8% are in favor of banning slaughterhouses" but this excludes the "don't know", so the actual support is 39.5%.

Sorry for causing confusion. I have now edited the original post to avoid this so it just reads "(~39-43% support).

Also you only mention the results from survey 1, the survey experiment of N=700, and I think a fairer comparison to the Sentience Institute figure is from survey 2 of  15.7% (95% CI [13%-18.8%]) support because both of these use weighting to represent the US public's opinion and are of a larger sample size.

Apologies - I've fixed it so I use the 39-43% figure from SI as well as referencing survey 2 rather than survey 1 (agreed it's much more useful as it's larger and nationally representative).

No worries re the confusion, yeah I didn't quite understand how it was framed in your post and thought Zoe might have the right interpretation but seems not! Thanks for amending your post and explaining though - it's much clearer now.

Ah cheers, that makes sense - I'll update in the forum summary post too.

Thanks James, this is fantastic!

Re Jalil et. al (2022), it's interesting to see there was a decrease in poultry/fish consumption as a result of climate change messaging (in addition to red meat). My prior concern would've been that people might simply switch from red meat to poultry/fish. For those interested in the general topic, note also this meta-review on interventions that influence animal-product consumption.