I'm a student of moral sciences at the university of Ghent. I've also started an EA group in Ghent.

Sorted by New
3Bob Jacobs's Shortform2y
7
8Is this a way to manipulate prediction markets?Q13h
Q
4
27[Give Directly] Sending a basic income to one of the world’s poorest places1mo
0
-11ESPR should return the FTX-funded chateau2mo
7
11Democratizing the workplace as a cause area2mo
17
55EA Images3mo
1
17Victim Coordination Website1y
5
12Department Voting2y
2
24Reworking the Tagging System2y
12
55Making More Sequences2y
17
Load More

I made two visual guides that could be used to improve online discussions. These could be dropped into any conversation to (hopefully) make the discussion more productive.

The first is an update on Grahams hierarchy of disagreement

I improved the lay-out of the old image and added a top layer for steelmanning. You can find my reasoning here and a link to the pdf-file of the image here.

The second is a hierarchy of evidence:

I added a bottom layer for personal opinion. You can find the full image and pdf-file here.

Lastly I wanted to share the Toulmin method of argumentation, which is an excellent guide for a general pragmatic approach to arguments

Reply
Is this a way to manipulate prediction markets?
Bob Jacobs11h10

Would it? For example, if people can make it rain and there is e.g a market for every hour of the day, will people really check that every single user who has betted on time T has also betted on time T+1 or else find it suspicious? Because that would mean that now  T+1 becomes suspicious if they didn't bet on T+2 etc.

(Sidenote: will they who downvoted this question explain why?)

The Netherlands passed a law that would ban factory farming.

It was introduced by the Party for the Animals  and passed in 2021. However, it only passed because the government had just fallen and the senate was distracted by passing covid laws, which meant they were very busy and didn't have a debate about it. Since the law is rather vague there's a good chance it wouldn't have passed without the covid crisis.

It was supposed to start this year, but the minister of agriculture has decided he will straight up ignore the law . The current government is not in favor of this law and so they're looking at ways to circumvent it.

It's very unusual for the Dutch government to ignore laws, so they might get sued by animal rights activists. I expect they will introduce a new law rather quickly that repeals this ban, but the fact that it passed at all and that this will now become a big issue in the news is very promising for the 116 million Dutch farm animals.

Well, not all messages on the intercom, and it's been happening for a bit longer than the last couple days. But I can totally understand that you are overloaded right now so I'll drop that point. More importantly, it's not just happening with the comments on popular posts and not just with comments either.
I suddenly lost a lot of karma but I wanted to show some proof that I didn't make that up so I went to settings and changed it to "show downvotes" and set it to batch at the nearest hour. That way I could make a screenshot of it and provide some proof it happened.

After years of using this forum I started to have problems with my writings not appearing on the frontpage and the mods not answering my messages the day I started criticizing EA.

This may very well be a coincidence in which case I genuinely apologize for the implied accusal. I still think it's important to mention it in case other people are having the same problem.

EDIT: After commenting this I suddenly lost a lot of karma due to downvotes:

But I think that those who have spent a long time on the forum do tend to be better informed and I do want their votes to count for more.

You made about +448 karma from the last post. When an actual scientist like Jobst comes here and posts a very well informed post, it get's +1 karma (from me, love ya Jobst). People like Jobst have a fulltime job as a scientist and are too productive to  spend most of their time online, and when they do go online they are so well informed it won't give them any voting power because terminally online people like us are simply not informed enough to understand him, and we have all the voting power. If you say something true but unpopular to those who already have power, you might even lose karma. There is no reason to think that those who have more voting power are more informed, more productive or more altruistic.

EDIT: To clarify: not literally his last post, his last post like this. Splitting things up into smaller vote-able chunks (like this post) nets you more voting-power than making the big posts of criticisms that inspire them. Having a high quantity is a better path to gaining voting power than high quality. This allows a few highly active (and thus most likely orthodox) users to boost or tank any piece of writing.
When we combine this with the fact that low karma comments are hidden we basically allow people with high karma (most likely orthodox users) to soft-censor their own critics.

You could've made a poll. That wouldn't have given you nearly as much karma/voting-power, and that wouldn't have given those who already have a lot of power the ability to influence the results. For the record I'm not angry at you, I'm angry at the karma system and the groupthink it generates. Given that I also have undemocratic power, I will stick to my own principles and not vote on these questions.

I think Sam Bankman-Fried should be removed from this page.

I don't think this page is especially conducive to combatting hero worship, but even if we decide to keep it I think we should rethink who is included and excluded from this page (maybe with a poll?)

This post has convinced me to stay in the EA community. If I could give all the votes I have given to my own writings to this post, I would. Many of the things in this post I've been saying for a long time (and have been downvoted for) so I'm happy to see that this post has at least a somewhat positive reaction.

To add to what this post outlines. While the social sciences are often ignored in the EA community one notable exception to that is (orthodox) economics. I find it ironic that one of the few fields where EA's are willing to look outside their own insular culture, is in itself extremely insular. Other social studies like philosophy, political science, history, sociology, gender studies all make a lot of attempts to integrate themselves with all the other social sciences. This makes it so that learning about one discipline also teaches you about the other disciplines. Economists meanwhile have a tendency to see their discipline as better than the others starting papers with things like:

Economics is not only a social science, it is a genuine science. Like the physical sciences, economics uses a methodology that produces refutable implications and tests these implications using solid statistical techniques.

In the paper "The Superiority of Economists" by Fourcade et al, economists were found to be the only group that thought interdisciplinary research was worse than research from a singular field. Furthermore they looked at top papers from political science, economics and sociology. They found that political science and sociology cited economics papers many times more than the other way around:

This lack of citing other social sciences was later confirmed by Angrist et al: 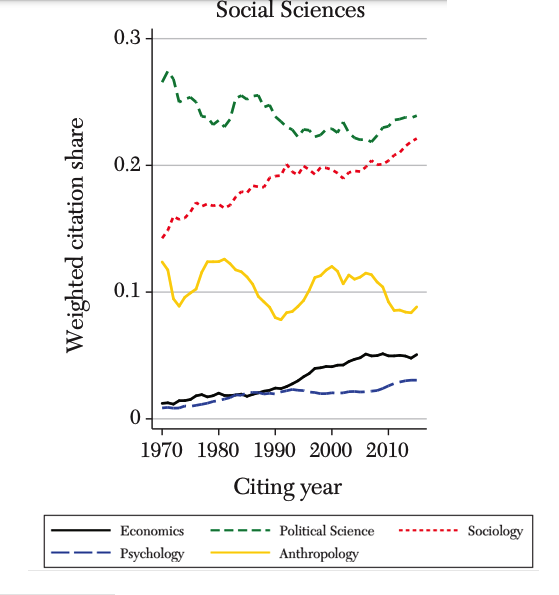 Given the complex interdisciplinary nature of societal issues, studying the basics of economics might make you overconfident that you can solve societal problems.

Take for example supply and demand. The standard supply and demand model will tell you that having/increasing the minimum wage will automatically increase unemployment. But if we look at actual empirical evidence it shows us that it doesn't. Learning the basics of economics might mislead people about which policies will actually help people and a more holistic look at the social sciences as a whole may counter that.

By focussing our recruitment on only a couple disciplines we inherit the problems of those disciplines. It is no wonder then that just like the EA community, economics is also very homogeneous. Bayer and Rouse show us that women are given less degrees in economics than other disciplines:

And get only 13.7% of the authorship of economics papers. Women are also less likely to get tenure in their first academic job compared to men and face a lot of discrimination in general. An AEA survey found that half of women say they were treated unfairly because of their sex and almost half say they've avoided conferences/seminars because of fear of harassment.
One of the only other social studies that is popular in EA is philosophy, which has similar issues with underrepresentation and discrimination.

For the longest time the EA topics page had a segment with 'key figures'. This is obviously bad if you want to combat 'hero worship'. My memory might be off but I seem to remember that the only social studies that were present were philosophy and economics, and practically everyone on that page was a man. [EDIT: Found an image, my memory was pretty close and in fact that page still exists! AND SBF WAS STILL ON IT!]

Even now we have a tag for philosophy and economics, but not for sociology, anthropology, political science, gender studies or many other social studies.

These are also the two social studies that the rationalists are the most interested in. The accusation of 'bad epistemics' seems to coincide a lot with 'non-rationalist epistemic'. I've wanted to push back on the dominant rationalists framework for quite a while now, and one post in particular I wanted to write is an attack on scientific-realism and a defense of social constructivism. I never did it because I feared it would get downvoted, nominally because it's not directly 'effective altruism'. But the hidden premises in how we research, how we categorize the world and what gets to count as 'genuine science' have a huge effect on what gets to count as 'effective altruism'.