How moral progress happens: the decline of footbinding as a case study

HistoryMoral circle expansion
Frontpage
How moral progress happens: the decline of footbinding as a case study
What happened
Why did footbinding decline?
The moral campaign
Economic changes in the value of girls’ handwork
Problems with this argument
What about other economic changes?
What’s going on here?
My tentative conclusions
Ways I could be wrong about this
Closing reflections
Postscript: Some meta takeaways from this exercise
Appendix A: Annotated bibliography
Appendix B: Timeline
Notes
10 comments

One question I am interested in is how moral progress happens, and particularly how far economic changes have driven moral progress (as opposed to political, cultural or other factors).

I think this question has implications for things like:

It’s obviously an extremely complex question, and I don’t think it’s the sort of inquiry where one should expect to find a robust, simple answer, even with a lifetime of work:

I still think it’s instructive to think about questions like this though, and to ground that thinking empirically by learning about relevant historical examples.

One example that I have spent around a week looking into is the decline of footbinding in China in the twentieth century.

Footbinding was the practice of tightly binding young girls’ feet so that the bones couldn’t grow. Usually this involved actually breaking bones, and was very painful.[1] Footbinding was practised in China for around a millennium,[2] and was widespread for centuries.[3] In spite of this prevalence, it disappeared as a practice over a space of 50 years, and in many places in more like a generation.[4] In 1900, footbinding was still a majority practice in Han areas, by 1940 at the latest it had become a minority practice, and by 1950 was very unusual. 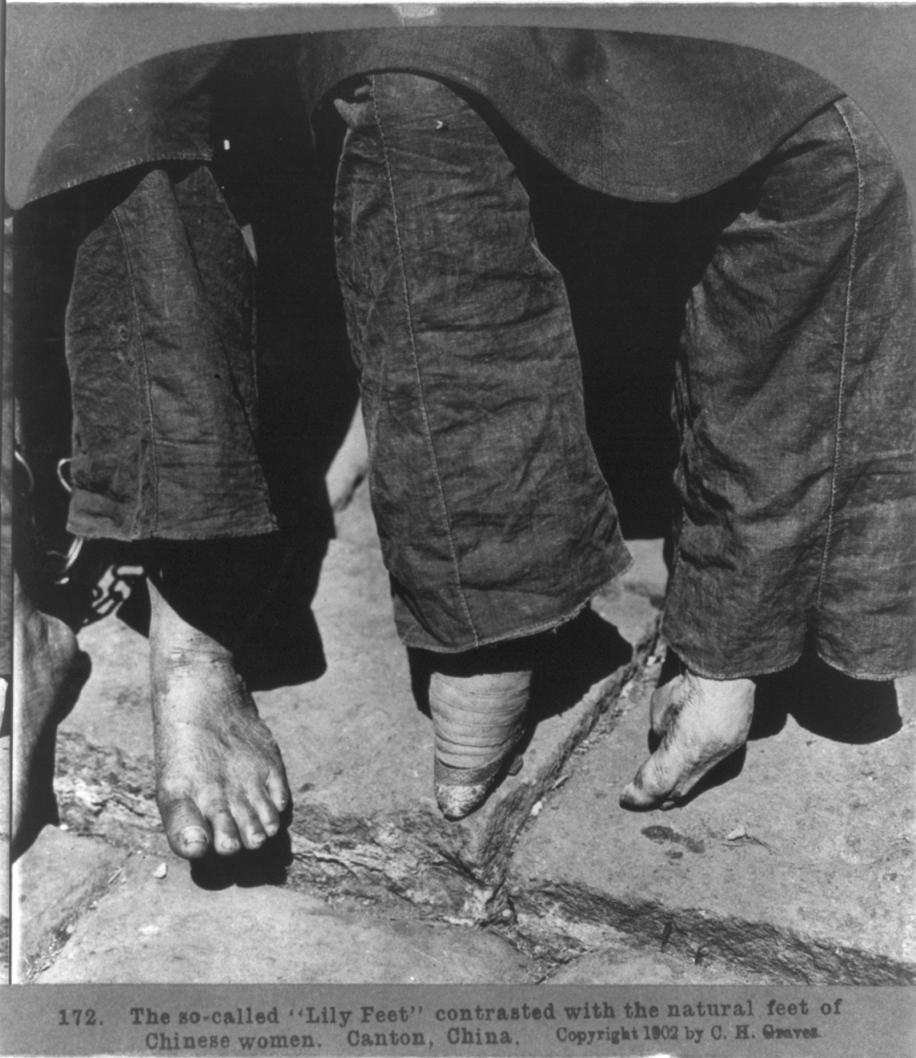 There was a prominent, early moral campaign against footbinding. From the late nineteenth century, foreign missionaries and then Chinese nationalists formed societies, circulated pamphlets, collected pledges from parents not to footbind, and wrote to officials condemning the practice. These efforts preceded an imperial edict against footbinding issued in 1902, and the eventual ban of the practice in 1911.[5]

In urban areas, it seems that footbinding as a practice declined in the 1900s and 1910s, so around the time of the ban. In rural areas footbinding did not become a minority practice until the 1920s and 1930s.[4:1] The first half of the twentieth century also saw the growing importance of imported and then factory-made yarn and cloth, which gradually outcompeted homemade equivalents. So it seems that rurally, footbinding declined at roughly the same time as the economic importance of girls’ sedentary handwork fell.

Why did footbinding decline?

The story here is roughly:

There’s debate about the relative importance of foreign missionaries and Chinese intellectuals in these campaigns.[8:4]

The evidence base seems mostly to consist of the records of the societies themselves (membership, pamphlets, letters etc), and the main thing pointing to causation is the fact that the campaigns preceded the official bans on footbinding.

Economic changes in the value of girls’ handwork

The argument here is roughly:

The evidence base is surveys of ~5000 women born in the first half of the twentieth century, asking them about their work, whether they were footbound, and whether their mothers and grandmothers were footbound. 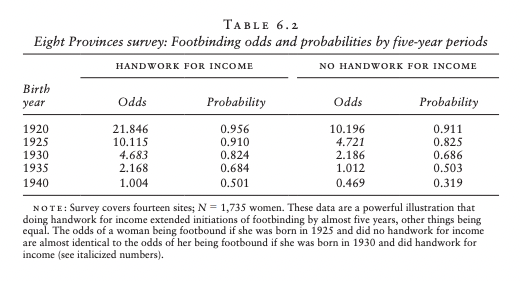 Problems with this argument

Shepherd presents data that footbinding prevalence doesn’t correlate with intensity of commercial handwork output in Hebei, but his data is pretty coarse and I think doesn’t undermine the Bossen/Gates/Brown data.[12]

However, there are a few things that worry me about this argument:

I don’t have the skills to assess the statistics used in these pieces,[16] but these worries make me much less confident in the handwork argument than I would otherwise be.

What about other economic changes?

Women and girls did begin to work in factories in the first half of the twentieth century, but in very small numbers. All of the scholars I cite above agree that this can’t have been a causal factor.

That said, I think that factory work would have killed off the practice eventually, if other processes hadn’t got there first.

A. When urban people stopped footbinding, were the relevant economic changes already impacting the most advanced cities?

B. When rural people stopped footbinding, were they influenced by the moral campaign?

C. Can both of these stories be explained by some underlying factor? 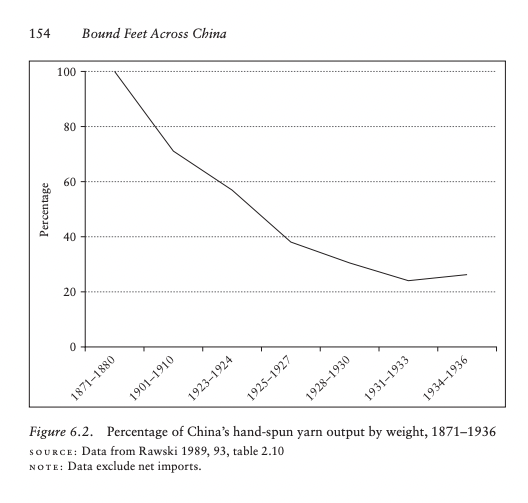 I currently think that:

Ways I could be wrong about this

Some general reasons that increase the chance I might be wrong: I spent around one week researching this, I only read secondary works, I have no background in Chinese history, and can’t read Chinese.

I currently think that footbinding is an example of moral progress where a moral campaign expedited the change, but economic factors made the shift inevitable regardless. Assuming that this interpretation is roughly correct, there’s a question about how representative footbinding is as a case study:[26]

Postscript: Some meta takeaways from this exercise

I want to applaud this effort. While I don't really think of myself as a China expert, I do think of myself as a guy who knows a good deal about China, including Chinese history from around 1840s or so up the present. I think that for someone with no background in Chinese history you did a great job here, and I think that this is a nice demonstration of how someone without a relevant background can still manage to grasp and issue with a short burst of dedicated effort. I also like how well structures this post is, being very clear about what could be wrong, conclusions, etc.

When I think of cultural changes, I generally think of how slowly cultural practices change. Thus, instances of rapid[1] cultural change (like the decline of footbinding, MADD changed the culture around drunk driving in the USA, or the acceptance of homosexuality in the USA) fascinate me. I'm sure there are lessons to be learned from these.

Thanks for this! It wouldn't have occurred to me to consider the decline of footbinding as a case study of moral progress,

I think you've probably noted this and perhaps didn't mention it because it's not directly relevant to the main questions you're investigating, but I think it's important to note for someone who only reads this post that having bound feet was a status symbol - it began among the social elite and spread over time to lower social classes, remained a status symbol because families who needed girls to conduct agricultural labor could not partake in the practice, and in practice an incentive to do it was to increase marriage prospects.

Thanks for this point.

I'm actually a bit unsure how true it is that the status element of footbinding was important. Certainly that's an established narrative in the literature (e.g. Shepherd buys it).

Brown, Bossen and Hill have an article I've only skimmed called 'Marriage Mobility and Footbinding in Pre-1949 Rural China: A Reconsideration of Gender, Economics, and Meaning in Social Causation' (link here: https://www.cambridge.org/core/journals/journal-of-asian-studies/article/marriage-mobility-and-footbinding-in-pre1949-rural-china-a-reconsideration-of-gender-economics-and-meaning-in-social-causation/CF5C5F1E441C5E2BF56BBA8B56F55835), which argues as follows:

There's an article I haven't read called 'Footbinding, Hypergamy, and Handicraft Labor: Evaluating the Labor Market Explanation of Footbinding', which sounds like it pushes back on these arguments. Link here: https://link.springer.com/article/10.1007/s40806-020-00271-9

Also, I think it's not clear how true it is that "families who needed girls to conduct agricultural labor could not partake":

Some other related things I've pulled from my notes are arguments in Brown's review article against Shepherd's view:

I liked this as a clear and concise breakdown of an interesting and relevant topic that I had heard of, but not known about.

It occurs to me that footbinding shares similarities with wearing high heels. Looks like I'm not the only one who noticed.

Was the "moral campaign" against footbinding itself actually about morality, or was it also mainly about economics and/or status? (Or maybe all these things are inextricably linked in our minds at a deep level.) At least one paper takes the latter perspective (albeit expressed in the language of "postcolonial feminism"). From its conclusions section:

Interestingly, foot-bound women were the strongest proponents of the practice in the face of the anti-footbinding movement.66 As Patricia Angela Sieber notes, from the perspective of these silenced Chinese women, footbinding was a “symbolic iconography of domesticity rather than [of] the deformed who hid themselves from government inspection and who reapplied binders as inspectors left.67 Why did the women who were being ‘liberated’ resist these policies for liberation? Because the anti-footbinding movement was not a movement for the ‘liberation’of feet-bound women as missionaries and reformers claimed, but was rather a product of “colonial conditions of global unevenness.”68

The presence of Western missionaries and colonialists in China led to an anti-footbinding movement, which gained exposure on a global scale. Male reformers, who were already shamed by China’s military defeats, were further shamed by westerners who through anti-footbinding tactics brought forth a colonial perspective of ‘acceptable’ cultural practices, which these Chinese reformers accepted.69 As Kenneth Butler notes “exploitation” occurs when an individual or group with power utilizes that power to his or her own advantage, at the expense of another individual or group without it.70 A review of the anti-footbinding historiography and feet-bound Chinese women’s histories reveals two acts of exploitation. The first was the colonialist imposition of morality upon the Chinese reformers and the second was the enforcement of anti-footbinding measures through imperial decrees, missionaries, and reform movements.71 Through the termination of practices such as footbinding, the Chinese nation did make the transition from tradition to modernity, but the end of footbinding was by no means achieved in the interest of foot-bound women whose voices and wants have since been marginalized in Chinese history.

I think this is interesting.

On whether the moral campaign was about morality:

Responding to the quote from the paper (which I haven’t read):

Thanks for the response. I don't disagree with anything you say here, and to be clear, I have a lot of both empirical and moral uncertainty about this topic.

It’s also worth noting that many girls resisted being footbound in the first place.

This makes me think of another parallel: parents forcing kids to practice musical instruments, which a lot of kids also resist, and arguably causes real suffering among the kids who hate doing it. (I'm thinking of places like China where this phenomenon is much more widespread than in the US.) How likely is a "moral campaign" for stopping this likely to succeed, without some economic force behind it?

Another parallel might be forcing kids to go to school and to do homework.

This episode of The 80,000 Hours Podcast discusses the influence of economics on moral values. For example, energy extraction technology as a key driver of human values.