I graduated from Georgetown University in December, 2021 with degrees in economics, mathematics and a philosophy minor. There, I founded and helped to lead Georgetown Effective Altruism. Over the last few years recent years, I've interned at the Department of the Interior, the Federal Deposit Insurance Corporation, and Nonlinear, a newish longtermist EA org.

I'm now doing research thanks to an EA funds grant, trying to answer hard, important EA-relevant questions. My first big project (in addition to everything listed here) was helping to generate this team Red Teaming post.

Sorted by New
17Giving opportunity: $50 'thank you' notes10d
5
11Which of Will MacAskill’s many recent podcast episodes would you recommend to other engaged EAs?Q2mo
Q
9
14Cause exploration: improving wild fish slaughter [half-baked, post-deadline]2mo
0
202Most Ivy-smart students aren't at Ivy-tier schools2mo
57
70Some research questions that you may want to tackle3mo
21
55(Cleaned) EA Forum data for your interest and enjoyment3mo
0
48What does ‘one dollar of value’ mean?4mo
4
93Stuff I buy and use: a listicle to boost your consumer surplus and productivity4mo
30
60How about we don't all get COVID in London? 6mo
34
2aaronb50's Shortform1y
2
Load More

Person A  can nominate Person B and have the card sent to her own (person A's) address to then give it in person to person B. The website is super clear that this is allowed, all on honor system.  I didn't emphasize this to minimize how sus the whole thing sounded, but I am happy to act as conduit for anyone's donation this way, or mail the card, or something else. Anyone can reach out if interested!

WWOTF: what did the publisher cut? [answer: nothing]

Contextual note: this post is essentially a null result. It seemed inappropriate both as a top-level post and as an abandoned Google Doc, so I’ve decided to put out the key bits (i.e., everything below) as Shortform. Feel free to comment/message me if you think that was the wrong call!

On his recent appearance on the 80,000 Hours Podcast, Will MacAskill noted that Doing Good Better was significantly influenced by the book’s publisher:[1]

Rob Wiblin: ...But in 2014 you wrote Doing Good Better, and that somewhat soft pedals longtermism when you’re introducing effective altruism. So it seems like it was quite a long time before you got fully bought in.

Will MacAskill: Yeah. I should say for 2014, writing Doing Good Better, in some sense, the most accurate book that was fully representing my and colleagues’ EA thought would’ve been broader than the particular focus. And especially for my first book, there was a lot of equivalent of trade — like agreement with the publishers about what gets included. I also wanted to include a lot more on animal issues, but the publishers really didn’t like that, actually. Their thought was you just don’t want to make it too weird.

Rob Wiblin: I see, OK. They want to sell books and they were like, “Keep it fairly mainstream.”

I thought it was important to know whether the same was true with respect to What We Owe the Future, so I reached out to Will's team and received the following response from one of his colleagues [emphasis mine]:

Hi Aaron, thanks for sending these questions and considering to make this info publicly available.

However, in contrast to what one might perhaps reasonably expect given what Will said about Doing Good Better, I think there is actually very little of interest that can be said on this topic regarding WWOTF. In particular:

I'm not aware of any material that was cut, or any other significant changes to the content of the book that were made significantly because of the publisher's input. (At least since I joined Forethought in mid-2021; it's possible there was some of this at earlier stages of the project, though I doubt it.) To be clear: The UK publisher's editor read multiple drafts of the book and provided helpful comments, but Will generally changed things in response to these comments if and only if he was actually convinced by them.

(There are things other than the book's content where the publisher exerted more influence – for instance, the publishers asked us for input on the book's cover but made clear that the cover is ultimately their decision. Similarly, the publisher set the price of the book, and this is not something we were involved in at all.)

As Will talks about in more detail here, the book's content would have been different in some ways if it had been written for a different audience – e.g., people already engaged in the EA community as opposed to the general public. But this was done by Will's own choice/design rather than because of publisher intervention. And to be clear, I think this influenced the content in mundane and standard ways that are present in ~all communication efforts – understanding what your audience is, aiming to meet them where they are and delivering your messages in way that is accessible to them (rather than e.g. using overly technical language the audience might not be familiar with).

Reply
Why don't people post on the Forum? Some anecdotes
Aaron Bergman2d72

One thing I intuitively think could help a ton is an opt-out-only "First Post" (and also maybe "Second Post" and "Third Post") tag placed on such posts.

I think it's both good and true that Forum users would/do shift their qualitative feedback and voting in a more charitable direction if and when they  knew that a particular post was a user's first. But it currently takes a couple clicks to discern this information which I assume most people don't actually go through upon reading every post by an author they don't recognize. Of course charitable voting/commenting could go too far, but that seems like a fixable problem

To share a bit of my motivation for this idea, here's  my comment on  "Your first posts will be cringe. It's fine." :

Literally true for me, down to the physical motion of cringing (maybe more like a grimace lol), a minute ago when I stared into the abyss.

Thanks to the 13 people who gave it a like to spare me some trauma at the time, though; in all seriousness, if it had gotten 3 karma instead of 20 I don't think I would have tried again

Reply
Why don't people post on the Forum? Some anecdotes
Aaron Bergman2d30

Oh man that is not a pretty graph...

Same data, better resolution (and feel free to move this to the main post Vaidehi or Amber) 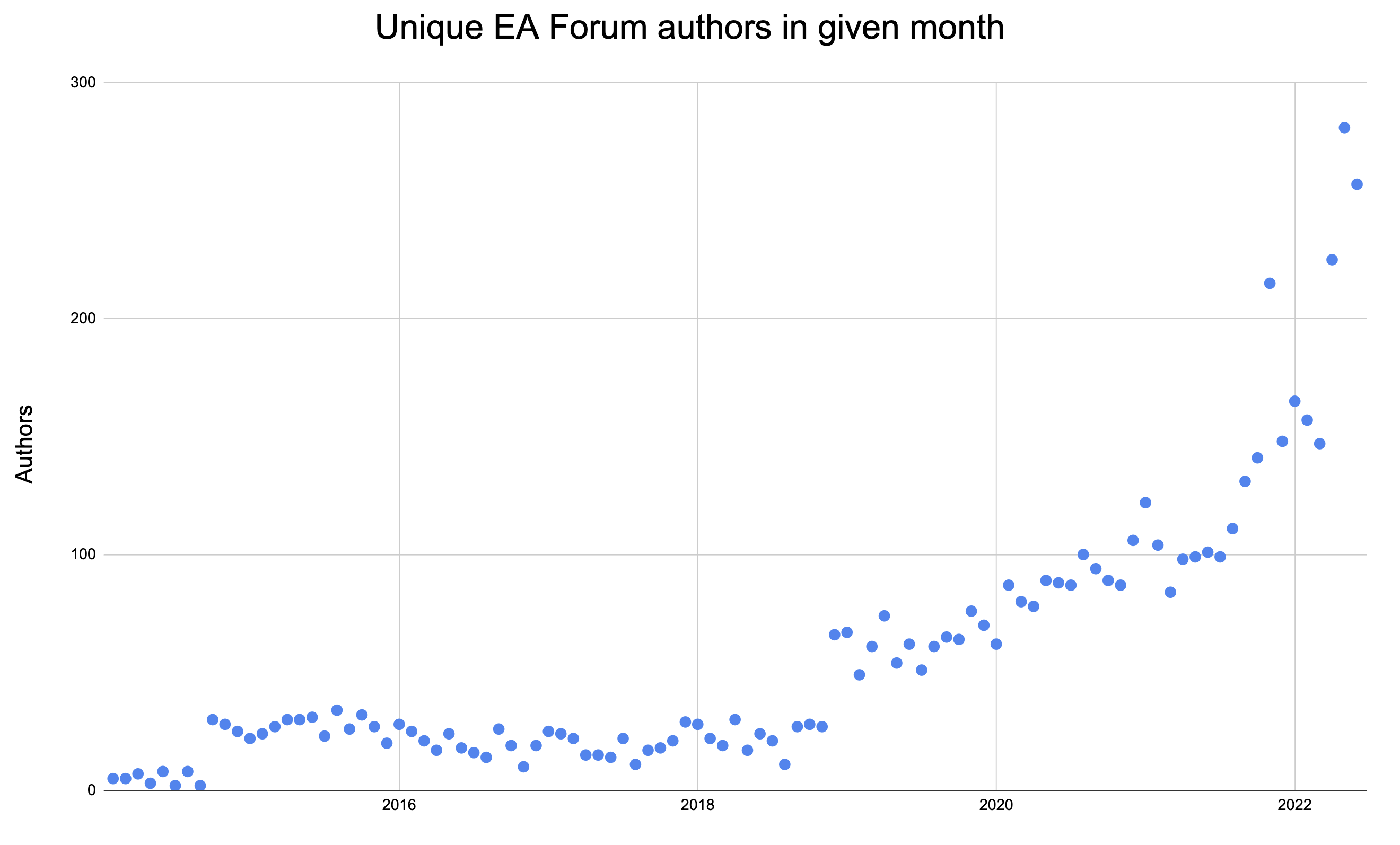 Haha thanks! But be sure to only read this comment if it's a good use of your time

I have largely similar thoughts, but one disagreement:

“On the first level, you could say that money is really valuable…Against that you could argue that, well, we have an insane amount of money for the size of the movement” [cant see block quote option]

Yes, and I’d argue this (I.e. the interaction between these two levels) is where marginal changes and critiques should be directed because it’s where in practice reasons-responsive decisions about gazzilions of dollars are made.

That is, “EA” (really, a number of different people to different degrees, some of whom have >$10^9) have decided not to fully fund [both of our top charities] this coming year for some set of reasons having to do with cause prioritization. At the top, “EA” can decide that the next marginal dollar should go to GiveWell instead of wherever it’s implicitly going now. Unless I’m missing something it really is a $1-$1 tradeoff

But afaik saving $100 on total top-down EA Global-related spending doesn’t result in $100 going to GiveWell. I don’t understand the funding landscape/mechanisms well enough to know where it goes, but I’d guess it essentially winds up in slightly more slack in the system at the top, which might result in, i don’t know, $5 (?) going to GiveWell, and $95 (??) coming back down in the form of nicer food at some retreat in 2024 (or something, I really don’t know)

If I have this mostly right, I think the main implication is that any argument against waste should mostly be an argument about where money gets directed some number of layers up.

As with Jordan, correct me if/where I’m wrong!

If it's not too late (and apologies if asked elsewhere)

Wow awesome analysis! Haven't read super carefully just yet but does seem to point in the opposite direction of the evidence I present insofar as it relates to uni CB. I think this would be worth making a normal high-level post! Blame it on me and link this comment if anyone disagrees lol

My only super brief thought, which I don't think is controversial but I'll make explicit, is that reverse causality (i.e. Stanford signal->success metric)  is one reason you might not want to take this as knockdown evidence in favor of "Ivies select for talent," though I really don't have a great guess as to how much this is indeed the case