Why Animals Matter for Effective Altruism

This is an introductory article for people currently learning more about effective altruism. “Effective altruism is about answering one simple question: how can we use our resources to help others the most?” This article explains why it’s so important to consider the wellbeing of animals when choosing where to donate, what career to take, and making other decisions from an effective altruism perspective. The primary author of this post is Jacy Reese with very helpful feedback from Jacob Funnell, Larissa Rowe, Eddie Dugal, Caspar Österheld, Hussein Al-Kaf, Kelly Witwicki Faddegon, Oliver Austin, Harrison Nathan, Eric Day, Robin Raven, James Snowden, Daniel Dorado, Kieran Greig, Oscar Horta, and Sanjay Joshi. The ideas expressed in the article come from a variety of sources, including people not mentioned above. Note that the views expressed in this article do not necessarily represent the views of these people or their respective employers.

Throughout human history, some people have diminished the plight of animals, even going so far as to suggest that these animals completely lacked the ability to feel happiness and suffering. Some people viewed animals as naturally “lower” than humans in the divine “ladder of nature” — that their needs and preferences simply held a lower priority than those of “higher” beings. One philosopher in the 17th century, René Descartes, ruthlessly illustrated his view by performing a live autopsy on his wife’s dog. He used this experiment as evidence for his belief because he found no soul inside the poor animal’s body.

In Are We Smart Enough to Know How Smart Animals Are? (2016), famed primatologist Frans de Waal grapples with the question of how humanity has consistently underestimated the cognitive capacities of animals, and explains that we’re finally coming around to the idea that animals have rich mental lives similar to our own. In fact, today 81% of surveyed US households “believe animals and humans have the same ability to feel pain."1 We also have scientific consensus that animals have the neurological substrates of consciousness. Indeed, animal consciousness is listed along with climate change and evolution on the Denialism Wikipedia page due to widespread agreement among scientists.

Realizing that animals have moral significance has serious implications. This article walks through the main reasons animals matter for effective altruism:

If you find these arguments compelling, you can donate to animal charities like those recommended by Animal Charity Evaluators, follow the advice of 80,000 Hours on how to use your career to help farmed animals, go vegetarian/vegan or reduce your consumption of animal products (which is surprisingly easy!), and join the Effective Animal Activism Facebook group.2 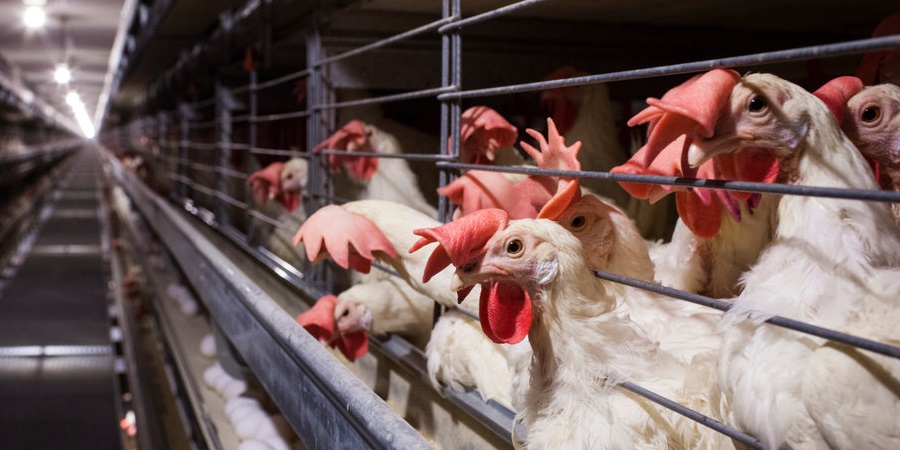 Seeing animals as individuals is the first step in recognizing the scale of issues like animal agriculture.

Recognizing the scale of animal suffering starts with appreciating the sentience of individual animals — something surprisingly difficult to do given society’s bias against them (this bias is sometimes referred to as speciesism). For me, this appreciation has come from getting to know the three animals in my home: Apollo, a six-year-old labrador/border collie mix from an animal shelter in Texas, and Snow and Dualla, two chickens rescued from a battery cage farm in California.

For many people, one-on-one interaction with animals provides plenty of evidence of moral worth. Apollo licks his lips and fidgets when I fix his breakfast, and the simplest explanation for his behavior is that he’s feeling excitement. Snow slowly closes her eyes and purrs when I rub her ears, and it makes the most sense to see that as pleasure and contentment, in much the same way humans experience these emotions.

Unfortunately, the vast majority of farmed animals like Snow and Dualla suffer from intense confinement, inhibition of natural behaviors, untreated health issues, and numerous other causes of suffering. Their experience has been called “hell on earth.” If you have any skepticism about the misery of these animals, consider watching some undercover investigation footage. If you really want to exercise your heart, consider that fish show behavioral and neuroscience evidence of consciousness, and watch this brutal investigation of catfish slaughter. When animal protection groups randomly select farms to investigate, they inevitably find horrific cruelty.

This suffering is happening at a nearly unimaginable scale. At this moment, there are roughly 7 billion humans in existence, but there were over 60 billion land-dwelling farmed animals (mostly chickens) killed in 2013, with another 38 to 128 billion farmed fish killed in 2011 and 0.97 to 2.7 trillion wild fish killed each year from 1999 to 2007. Given that these figures are outdated, and global consumption of animal products is rising, current figures are probably even larger.

Many food advocates also oppose animal farming because of the harm it does to the environment, public health, workers, and the global economy. I think the animal protection case is the most compelling case from the effective altruism perspective, but these are important factors to consider.

The problem of animal suffering becomes even more significant when we consider the vast numbers of wild animals. There are 10^11 (100 billion) to 10^12 land-dwelling mammals and birds, 10^13 or more wild fish, and over 10^18 bugs. In addition to human-caused suffering, many of these animals endure untreated disease and injury, starvation, and long painful deaths.

Additionally, just as the expected number of human descendants in the future likely dwarfs the current number of humans in expectation, the expected number of nonhuman sentient beings in the future seems exceedingly large, especially when we consider the possible development of digital sentience. Consideration of the far future is the strongest factor in favor of prioritizing animal advocacy for many long-time EAs, including myself. 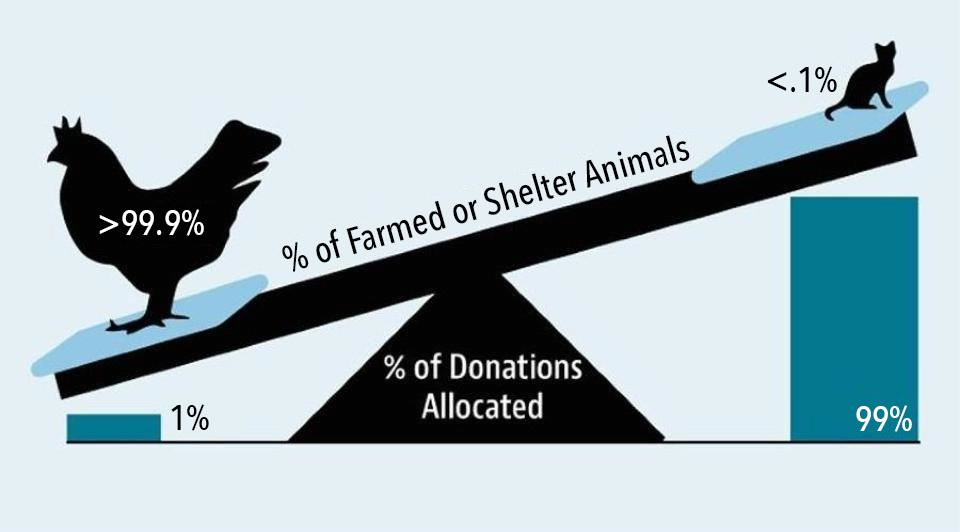 Farmed animals make up the vast majority of animals used by humans, but receive only a tiny fraction of animal-targeted donations.

Around 97% of philanthropic funding in the US goes towards helping humans. The remaining 3% is distributed across protecting the environment and animals. Even within the funding spent on animals, less than 1% goes towards farmed animal charities3 — despite the fact that farmed animals account for over 99% of the animals used by humans. 80,000 Hours estimates that between $10-100 million is spent helping the more than 100 billion animals killed for food every year.4

This evidence of neglectedness can be partially explained by speciesism: the discrimination against certain individuals solely because of their species, which is apparent in the way people mistreat nonhuman primates, or care deeply for dogs but ignore the plight of farmed pigs, who share similar mental capacities. This bias is apparent even in everyday language when we say things like, “Kill two birds with one stone” or refer to a nonhuman animal as “it.” There is some experimental evidence that we think of animals we eat as having fewer mental capacities, and struggle to update our concern when we find out those animals are smarter than we thought, even though we think we should care more in those situations.

It was actually my recognition of my own speciesism that ultimately led me to prioritize animal advocacy, realizing that I was making irrational arguments to justify my focus on human-targeted interventions. Given the cost-effectiveness of human and animal charities, I would have needed to care so little about an individual animal relative to a human,5 and as a neuroscience major in university, I knew there was just no scientific basis for that judgment. 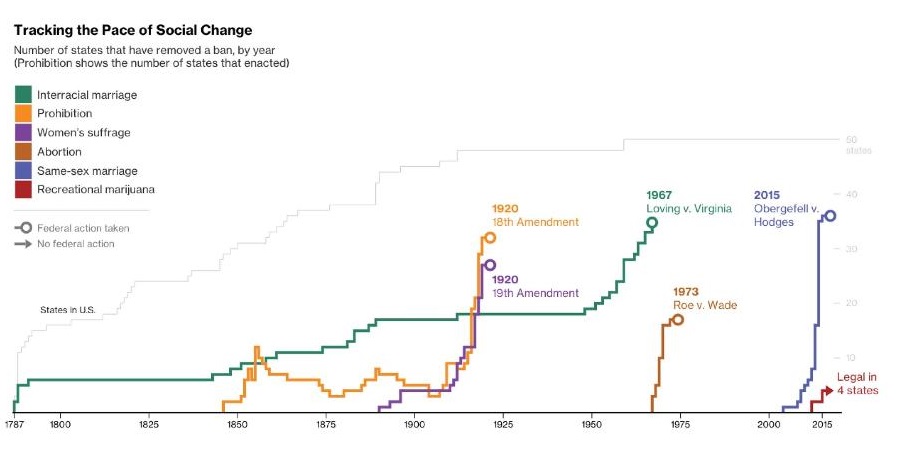 Social change can happen much faster than we expect beforehand.

At first glance, the case for the tractability of animal advocacy seems fairly weak. Much of the farmed animal advocacy field is focused on promoting vegetarian and vegan diets. This intervention and other forms of social change lack the robust randomized controlled trials that exist in other interventions favored by effective altruism, such as distributing malaria nets.

But there is reason to be optimistic about our ability to effect change for animals. We have already seen serious progress in the animal advocacy movement, such as reduction in some of the cruelest practices and strong public sentiment against factory farming. In the US, the number of animals slaughtered for food seems to have been dropping or at least stagnating, despite the growing human population. The corporate and public policy change in favor of animals, in particular, seems easily attributable to activism rather than external factors.

From a quantitative perspective, it seems like our donations can make a substantial impact. Current research from Animal Charity Evaluators indicates that, for example, a donation to Animal Equality, a highly effective animal rights organization, is estimated to spare an expected 13.2 animals per dollar from the suffering of animal agriculture through inspiring people to reduce or eliminate their consumption of animal products. Open Philanthropy Project estimated that corporate cage-free campaigns spare 120 hens per dollar from confinement in tiny battery cages. Even though great, sometimes indistinguishable, plant-based meat, dairy, and egg products exist, many people involved in effective altruism are also excited about developing better alternatives to make eating animal-free foods easier for consumers.

In addition to direct evidence, historical evidence from previous social movements suggests it’s possible to substantially affect the ideas and moral values of humanity on a large scale. There is also an abundance of research from social psychology, marketing, and other areas that illustrates the ability of purposeful messaging to change individual attitudes and behaviors. The totality of this evidence gives us good reason to believe that we can make serious improvements for animals.

It seems the animal advocacy movement, right now, could experience a rapid take-off, much like historical social movements. That nascent potential could lead to significant gains from marginal contributions. The room for more funding, talent, and initiative in this field is huge, and it’s truly an exciting time to get onboard with a new and hugely important social movement.

As mentioned previously, if you find these arguments compelling, you can donate to animal charities like those recommended by Animal Charity Evaluators, follow the advice of 80,000 Hours on how to use your career to help farmed animals, go vegetarian/vegan or reduce your consumption of animal products (which is surprisingly easy!), and join the Effective Animal Activism Facebook group.6

2. Note that the term Effective Animal Advocacy is more popular these days because Activism is sometimes thought to just apply to leaflets, protests, and other forms of grassroots social change. The term EAA is meant to capture everyone working to help animals effectively.↩

3. Note that this excludes charities that work primarily outside of farmed animal advocacy but then spend some resources to help farmed animals. It’s very difficult to get the estimates of internal budget breakdowns necessary to include those programs in the estimate, but I think it’s safe to say that still a tiny minority of funding goes towards farmed animal protection.↩

4. Estimates I’ve seen put the figure at probably less than $40 million in funding for farmed animal advocacy, although the definitions are tricky here, and I don’t know of a publicly available systematic estimate.↩

5. Figuring out exactly how much you need to care about humans vs. animals is very challenging given the large number of judgment calls involved. For example, if comparing the reduction in malaria achieved by GiveWell top charity Against Malaria Foundation to the reduction in factory farm suffering achieved by ACE top charity Animal Equality, you need to have views on how long the average malaria case lasts, how bad that suffering is compared to living on a factory farm, etc. The last time I saw a back-of-the-envelope calculation for what the human-animal tradeoff needed to be to think both cause areas were equally as impactful, it was around 1:10,000. Although that still excluded potential long-term effects and was a very very rough estimate.↩

6. Note that the term Effective Animal Advocacy is more popular these days because Activism is sometimes thought to just apply to leaflets, protests, and other forms of grassroots social change. The term EAA is meant to capture everyone working to help animals effectively.↩