The Map of Impact Risks and Asteroid Defense

This map is part of the “Map of Natural Risks ” which is in turn part of the map “Typology of Global Risks.”

The main ideas of the map

1. The danger posed by asteroids is diminishing as technology advances, mostly because we will prove that there will be no dangerous asteroids within the next 100 years and secondly, because of our growing ability to deflect them. But, observation is much more important.

2. An asteroid defense system could yield negative utility, as powerful deflection technologies or asteroids could be used as weapons. For example, a gigaton scale nuclear bomb in orbit may be used for asteroid deflection once in a million years, but for war – one in a thousand years or less.

3. But, maybe we live in the period of intense bombardment, as some scientists propose (Napier), and we have 100-200 times higher intensity of impacts compared to background. If this is true, the implication is roughly a 1 per cent chance of a 1 km body impact in the next 100 years.

So, we should prove that we don’t live in such a period.  (My thoughts: it may not be a coincidence that we live in such a period, as intense climate changes has helped to speed up human evolution.) Some scientists suggested at least three possible 1 km sized impacts in the last 10k years, including the Clovis comet  (13 ky)  , which debris may be created 500 000 oval structures, known as Carolina bays, Mahuika crater (1400 AD) and 5000BC crater in Indian ocean .

It is reasonable to be skeptical about any catastrophism style claims, as their prior probability is small, but disproving such claims factually could lead to the biggest reduction of expected asteroid risks. A lot of new counterevidence has been found, but the scientific discussion about recent bombardment episodes still continues.

It also interesting to note that historical annals have descriptions of many events which looks like impacts, and which include deaths, in one case as much as 10k in China (the same time as Mahuika crater).

4. The biggest risks comes from dark comets, which pose the most difficulty for observation. We should find the way to calculate their real density and to locate them before they enter into the solar system. Naiper suggested that 100k years ago, a Centauri object (comet-like body on unstable orbits near Saturn) of 100 km size entered the inner Solar system and later broke into several smaller bodies. Most of them are now dark comets, which are very dark invisible objects, but some known remains could include the Encke comet, Tunguska body and Taurid meteor shower. Some of them could create impacts as claimed by the Holocene Impacts working group. The largest dark comets should still be visible as smaller bodies. Recent infrared observations limited their numbers.

5. Centaurs appear to be the most dangerous class of asteroid-like objects , which are asteroids orbiting between Jupiter and Neptune, and thus often affected by their gravitational field, which sends them into the inner solar system. Centaurs typically end their journey by colliding with planets or the Sun. Stable time for their orbits is around 10 million years. Also, their remote position from the Sun and Earth makes them difficult to observe compared to main belt asteroids.

But, if a Centaur is disturbed by closely approaching Saturn, it will only take about 5 years for it to reach the inner Solar system and Earth in almost a free fall trajectory. Many Centaurs are 100 km in size and are in fact ice bodies, which will disintegrate in the inner Solar system into smaller comets. According to Napier, a centaur enters the inner Solar system every 100k years.  A centaur named “Chiron”  likely will become a short periodic comet in the next 3 mln years and a 0.12 probability of becoming an earth-orbit crossing comet. Its diameter is 200 km and on breakup it will create many debris, which may pose a risk to Earth.

6. Space exploration based on self-replicating robots will prevent risks of accidental impacts in the next 100 years or less (but these come with other risks).

7. Currently, we have technologies to deflect only small objects and with very advanced warning, which are not posing existential risks.

8. In general, human extinction risk from asteroid impacts are overestimated compared to other risks. (If we are not living in the period of bombardment, but even if we are living in it, it also shows the resilience of the biosphere and humanity to recent impacts, as suggested impacts of kilometric sized bodies doesn’t influence ways of human evolution). An extinction level asteroid has the probability of approximately 1 in 300 000 in the next 100 years, based on past frequency of 10 km size bodies impacts, the last of which happened 35 mln years ago. Paleohumans successfully survived the Eltanin impact 2 mln ago from a 1-4 km body, and also quickly repopulated afterwards after other similar impact ).

9. Non-proportional budget allocation for different x-risks. Overestimation of asteroid risks becomes especially clear if we compare the accepted probability of collision and proposed budgets on it (in order of billions of dollars), when compared with budgets on preventing other x-risks (10 mln USD total for preventing unfriendly AI).  But these proposed budgets for antiasteroid defense are not available now. B612 was only able to rise around 1-2 mln a year, the same as to MIRI budget.

10. Smaller impacts could result in civilizational collapse, which may be a self-sustained, multi-level process. See Hanson’s article about social collapse and human extinction.

11. Anthropic shadow could result into underestimation of impact risk, especially of the risk of very large impacts.  I believe that such underestimation could be not more than of a factor of 10.

12. If a 100 km size body falls on the Sun, it would produce a flash 1000 times stronger than the sun’s luminosity for 1 second, which would result in fires and skin burns for humans on the day side of the Earth. Some scientists think that the 775 AD event is explained by even smaller impact.

Structure of the map

The horizontal axis of the map is showing more and more dangerous objects (with some obvious caveats, for example the size of comets could vary and risks from tail debris depends on whether or  not a Centarius comet has entered the inner solar system in the last 100k years and broken-up – see Napier).

The size of asteroids are roughly divided into 3 categories: local effect, civilizational collapse level and extinction level. But, the actual size boundary between these three categories is debatable, and depends of speed, composition, angle, location of impact and many unknowns of its consequences.

The vertical axis of the map shows our possible efforts in impact prevention. I don’t delve into details of the many projects, which are excellently described in Wikipedia.

I would appreciate any comments which will help to improve the map.

I reccomend to see the map in the pdf form as jpg below is compressed to fit the page.

The pdf of the map is here: http://immortality-roadmap.com/asteroid.pdf 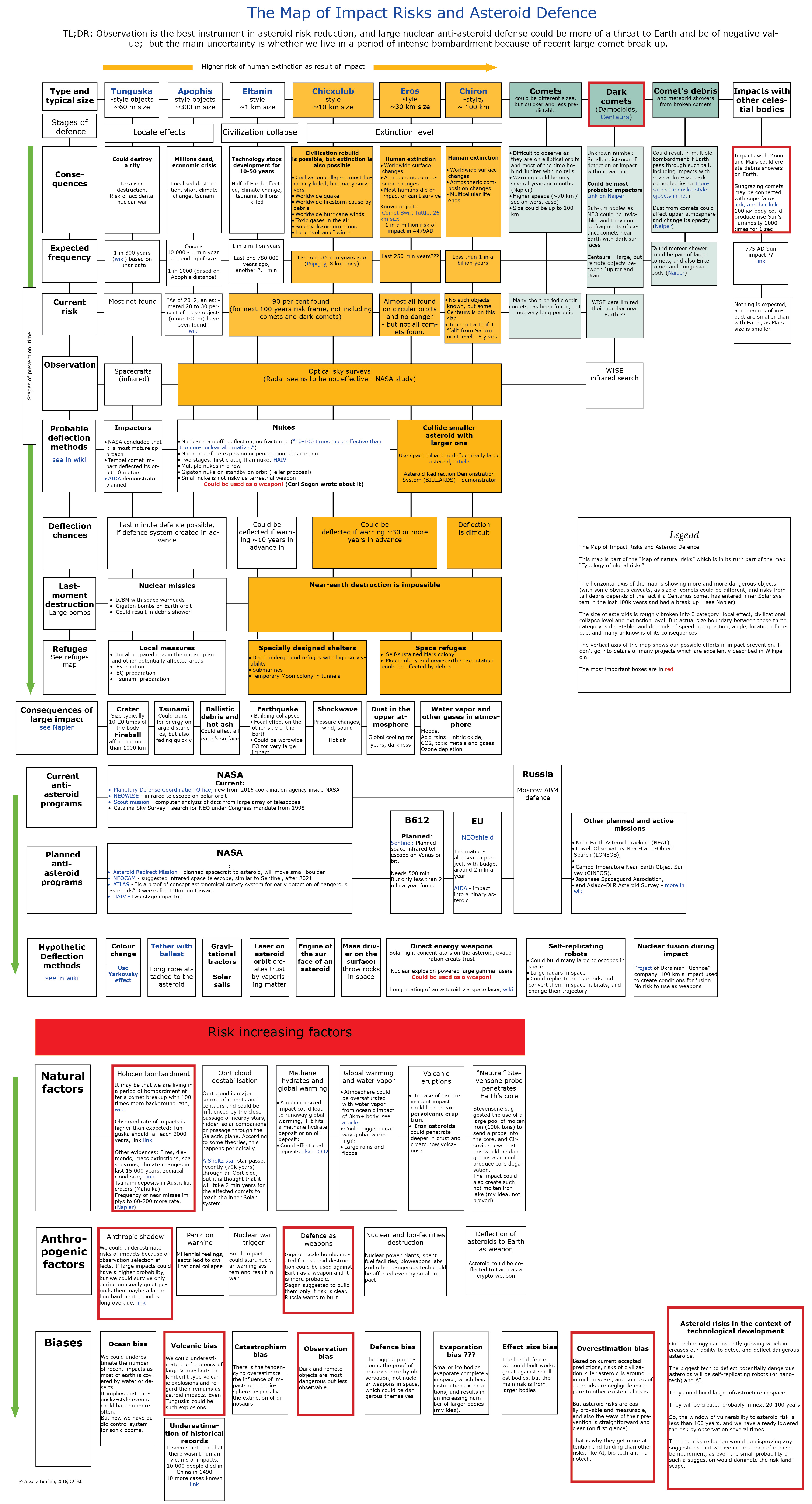 Very nice! I would add another stage of defense of alternate foods. If we were actually prepared with these, then I don't think we would get civilization collapse for 1 km diameter and maybe not even for 10 km.

I am now working on an article about submarines as possible refuges in case of a global catastrophe. One of idea I had for food provision for it is filtering of water to get plankton, the same ways as whale do it. What do you think about feasibility of such approach?

That might work, though people would probably prefer fishing. But with a 10 km diameter impact, there probably would not be much fish or plankton.

But may be some bacteria could still be suspended in the water as well as some organics?

Thanks for writing this. One point that you missed is that it is possible that, once we develop the technology to easily move the orbit of asteroids, the asteroids themselves may be used as weapons. Put another way, if we can move an asteroid out of an Earth-intersecting orbit, we can move it into one, and perhaps even in a way that targets a specific country or city. Arguably, this would be more likely to occur than a natural asteroid impact.

I read a good paper on this but unfortunately I don't have access to my drive currently and can't recall the name.

Thanks - just saw this comment now. Not really miss the idea, but not decoded include it here.