It’s only been around a month since our last update post, but we have a bunch of new features for everyone. A quick summary of the updates:

As a reminder, if you have any feature requests or suggestions, you’re very welcome to share them on the feature suggestion thread (or to get in touch). If you have comments or questions about anything here, you can also just leave a comment on this post.

We have a new search UI! This is hopefully easier to use, and it also lets you filter by date, topic, and a couple of other things. You can also exclude terms by writing phrases like “Forum -update” (to search for things that include the word “Forum” but exclude the word “update”), and search for specific phrases by using quotation marks.

For now, filtering is only possible on desktop. You can access the search feature by typing something into the search bar that appears at the top right corner of your Forum window and hitting enter, or just going to this link.

This update doesn’t incorporate all the suggestions we’ve received, but it’s a start. If you have other suggestions – particularly if there are instances where the old UI was better for you – please let us know! We might not implement your suggestions right away, as we’re focusing on some unrelated projects right now, but we’d love to hear them and may prioritize them.

As the amount of content on the Forum grows, we want to help people to engage with the content that is most relevant and helpful for them.

One approach we are exploring is subforums, and we launched our first pilot subforum (the bioethics subforum) last month. We later launched a software engineering subforum and will likely be rolling out more subforums over time. The direction we take will depend on how these pilots go.

We are continually adding features to the subforums, and your feedback is always appreciated!

We’ve made a number of technical changes that improve the site’s performance. For instance, the Frontpage should now load around 25% faster.

We’ve also had a couple of brief outages recently, which caused some distress. We fixed an issue with our deployment process which should prevent this from happening in the future. 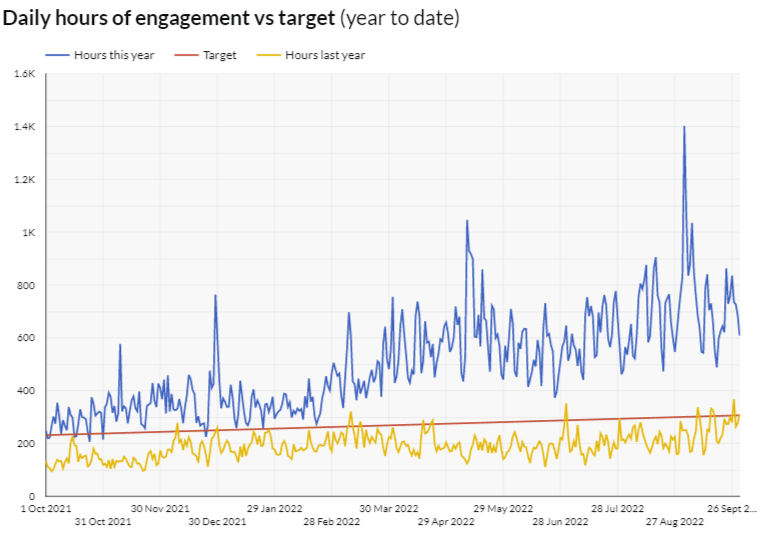 Thanks all for using the Forum!

Other changes and updates

Previous:
Agree/disagree voting (& other new features September 2022)
23 comments142 karma
Next:
New Forum License: Creative Commons
18 comments56 karma
Log in to save where you left off
Mentioned in
41Effective giving subforum and other updates (bonus Forum update November 2022)
29Would subforums be useful for you? If so which ones and why?
23EA & LW Forums Weekly Summary (24 - 30th Oct 22')
New Comment
12 comments, sorted by
top scoring
Click to highlight new comments since: Today at 9:36 AM
[-]Charles He1mo 107

Subscribing to the new subforums adds a tag to the user's profile, see below.

I suspect people might read into this tag inappropriately, e.g. associating them with the skills/experiences/perspectives of being a SWE, when the person may not be a SWE at all or have any of these traits.

Also as a UX thing, getting a publicly viewable side effect of a subscription seems unexpected and out of the norm.

This is association is harmful for my EA forum experience. Pls fix senpai.

This week, someone correctly used "race condition" in a reply.

If you click on your name in the top right corner, then click edit profile, you can scroll down and delete tags under "my activity" by clicking the x on the right side of each block.

Unfortunately, this doesn't work, this unjoined me.

Hooray. Love the yellow six-legged triceratops. (Or is that one a biceratops? hmm or diceratops?)

Important clarification: the bi?ceratops has five feet! Much like Lamassu:

The welcome message for the sub-forums seems like it should be dismissable as it is too much of an attention grabber to be there all the time.

Below is one case where EA Forum dark mode might be failing.

Might be a minor CSS/"missed one case" sort of thing .

The forum feels a bit cleaner these last few days. Maybe because there are fewer pinned / curated posts. I think I still like the <https://www.lesswrong.com/> or <https://ea.greaterwrong.com/> frontpages better (no pinned posts, or just one).

Personally, I've moved to mostly using <https://newsboat.org/> (an RSS reader) to browse new posts, rather than visiting the frontpage.

I don't think that the above implies any particular course of action for forum maintainers, because they might be optimizing for the general majority. But for readers who really like clean interfaces, these other frontends might be worth looking into.